Why is it every time I make a recipe it says something is wrong with the numbers. pg/vg ratio?

Can you give us an example of what you mean? Maybe share a link to one of your recipes or upload a screenshot

its because your ratios are not adding up , usually it means you flavor and nic is throwing off the Vg / PG ratio that your wanting

Im trying to make a recipe. I have a pre mixed 120ml bottle of 3mg nic 80%vg/20%pg. That I want to add to a 30ml bottle. I will make the recipe like I did before then send a screenshot pic of It

Ahhhhh. In that case when you are adding your flavourings it’s throwing off your ratio like @fidalgo_vapes said. If you tick the Max VG box you should be good to go

This is how it looks the second I put in my first flavoring. 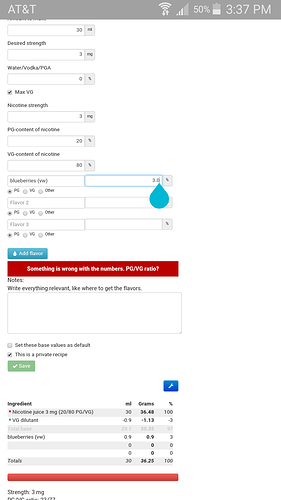 Basically you aren’t going to get 3mg strength because the flavourings are reducing your premixed liquid strength. It’ll be less than 3mg unless you vape it as it is with no additional flavourings.

You could just put 0mg as desired strength maybe?

Hi all If I buy 60%vg 40%pg nicotine based bottle ( nicotine lvl 6) and if I want to make my own eliquid in 30ml bottle ;how many percent flavour should I put in also if I add flavour more than one how many I can add in and what percent they must be too ? Best Regards Ferhat

I was stupid enuf to order a primix of PG 30 VG 70 and 3% nicotine. And i cant adjust this recipe to work with the calculator. Plz some help [image] i would like it to be 3 % nicotine

Yeah the flavorings are pg based only.

To avoid this, simply check off “Max VG” and then you can see what the actual PG/VG ratio is

So uncheck the max vg box and leave everything else the same?

I don’t use premixed bases (except for my testers, which I calculated for)
Because it throws your numbers off. See in your recipe, you already have negative numbers in your VG
This has come up in the past, and others have a remedy for it, but I don’t remember.
The best I can remember is they do it like this… 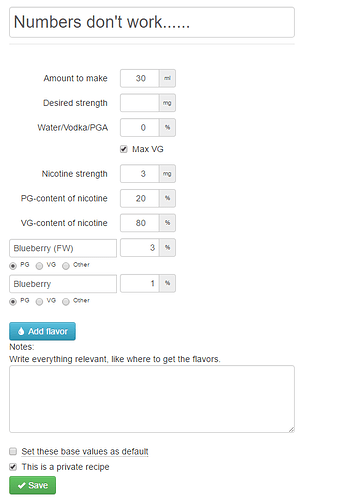 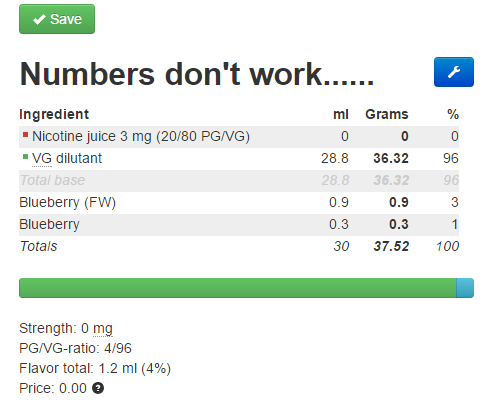 You have pre-mixed nicotine at 3mg, so each time you add to your base, it dilutes your nicotine, so it can’t stay at 3mg in your recipe…