Do the calculations look right?

Ive started making juice by weight and it just seems ive used more custard concentrate than ive used before.
Plus i used a 100nl container and ran out of room for 90ml juice !!
Does this look correct ? 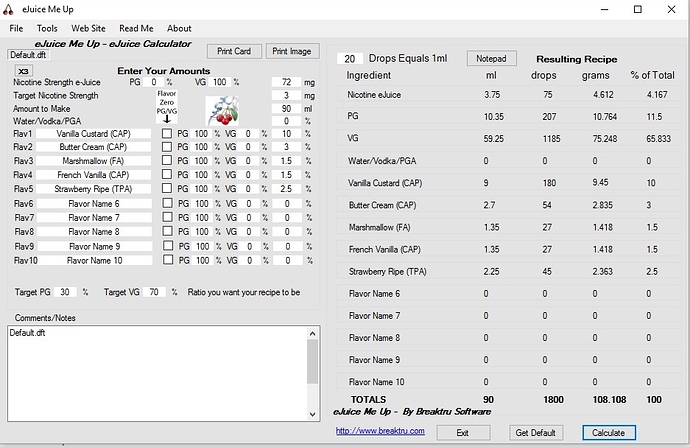 Looks foreign to me, better punch it into ELR to make sure it’s right

How can I not be the first to “heart” this?

After doing some more checking yours looks correct. Dont know why it didn’t fit in your bottle, unless your bottle size is incorrect.

Did you input the weight to volumn measurements in the tool section.

Like mentioned earlier. 1g/1ml for flavoring. Then the appropriate weights for vg and pg?

yes Matey i did

I would have to say your bottle is incorrect on it’s size 90ml is 90ml no matter what the weight is. I input your exact recipe on elr and it was only 2.13gr less than your e-juice me up. It should fit in your bottle with room to spare.

Your weights look off to me. See the differences between the program you ar using and the ELR calculator.

bottle size and or brain fart. Gotta be one of the two. I’ve done it twice where I added a flavor two times and ran out of room. I always premeasure my bottles and if they’re off by more than one or two ml I’ll use a white or black lid white being a short bottle and black being long. Normally I use coored lids, they just look so pretty sitting all together. It’s it’s ti’s like a rainbow. The recipe looks fine. The difference in the weight of the flavors isn’t going to make > 10ml worth of difference no matter which you choose, 1 g or manufacturer.

Is there any chance you accidentally looked at the % column at some point while you were mixing instead of at the gram column? I know it sounds silly, but that’s the only thing I can think for why you wound up with more than 100ml instead of 90. I’ve done it myself before (with Inawera’s DNB of all things!!) and I know others have as well cuz it was requested that @daath make the ELR grams column bold. He did, but I still messed it up. LoL.

The first thing I noticed (since I use both) is that ELR uses 35 drops, and that app uses 20 drops per ml.

Huge gap, and easy to miss!

This is a bonus side effect for those using syringes. No conversions (so to speak). 1ml will always be 1ml, no matter the size of needle or syringe.

So really Im better off using the ELR calculator?

I think ELR is a fantastic calculator and I’d definitely recommend giving it a shot if you haven’t. I’m a little biased though, it’s basically the only one I use. The one downfall is that it’s web-based, so no internet means no calculator.

Do you measure by weight, volume, or drops? If you are measuring by drops, I’d highly recommend considering the switch to volume or, even better, weight.

That’s right. I’m an idiot. Your post said that and that was the whole thing. LOL. Chalk it up to the first week of having to get up at 5:30 again after three months of summer.

So since you’re measuring by weight, the drops is pretty arbitrary and totally irrelevant. Have you calibrated your scale or tried weighing something you know the weight of? If US, you can use nickels. Each should weigh 5 grams.

Before I found ELR I used E-juice me up, and it is a good calculator but I think ELR is better and easier.