Do you dilute your nicotine solution?

Have been seeing threads about nicotine dilution lately and decided to read up on it. Seems like a lot of people dilute their nicotine to a lower concentration. I have never thought about doing it before. I ordered some 100mg nicotine during Black Friday and was wondering if I should dilute it.

If you do dilute your nicotine, what are the benefits of doing so and is it more of a convenience thing or safety related?
And does it last longer at lower concentration?

I keep my 100mg nic in the freezer and dilute it to a 24mg working solution. I feel like it’s safer for me, I don’t have to worry about way over nic-ing if I accidentally get a little too much, and I don’t worry as much about leaving that concentration “out” since I have pets and a kid. She’s older and knows not to touch my stuff, but still.

That makes a lot of sense to me. Sounds like a good idea after all.

So how long after dilution will it be good to start mixing?

On another note, I emailed Liquid Barn about storing the nicotine in their plastic bottle that it came with, they’re telling me that it is perfectly safe to do so.

I have always read that it should be in glass bottles. But will leave it in the original container if it is safe because there’s two bottles and I’ll only be needing one for a long while.

Any thoughts on that?

I buy 100mg nic, bottle I’m using is on shelf, extra bottles are stored in freezer.

I don’t dilute since I make all my juice at 0nic and add nic when I’m making a 30mil… found this easier when I’m mixing same flavors for people at different nic levels.

i live in Eu, so i don’t have experience with Liquid Barn products, though plastic bottles that nic are coming with are fine to store it (that bottle for example could be on a shelf for some time, if the bottle wasn’t safe how would that company provide a good quality products if the storage wasn’t good?)

personally because of EU TPD i use 20mg nic (more than it is forbidden to get) i don’t dillute it, but even before that i was using much higher nics, still the same, i never dilute it… i just keep it whole and everytime i get as much is needed to make my mixes…
for example for making 100ml of juice at 3mg nic strength, by using 20mg nic i need 15mls… i will just take that when i need and i will leave the rest as it is

Yep. And the company line is that you should do this no matter what because nicotine is a highly toxic substance. Better safe than sorry. That being said, this is another reason I don’t use 100mg straight. I don’t want to don hazmat gear just to mix. I’m usually doing good to expend the effort to lug all my stuff out of the corner I keep it in. Having to go through the extra time to suit up would make it that much less likely I’d do it. People vape 24mg e-liquid so I’m not too worried about it getting on my skin, at least in the small doses that might should a spill occur.

I get 48MG because I don’t trust myself. I have my mixing down to a very quick process in the 120ml bottle. 7.5 ml of nic, then 20-25 mg of flavor then the amount of PG the recipe calls for , about another 10-15 mg, then top off with VG. All straight to the bottle. Then take a mixing cup with water in the microwave for 1.5 minute. Place bottle with cap unscrewed in mixing cup to settle. Shake and vape.

If you have a good scale, use the calculator on this site and start by putting NIC in your empty bottle. Thatway, if you add too much, you can remove some without ruining your mix. No need to dilute if your carefull and safe.

Yeah. I understand. I’m normally very careful with things but have never mixed before so we’ll have to see.

Is it safe to handle it in a room environment with someone around, I mean is it safe to have the fumes in the air and inhaling at 100mg concentration? I guess that’s what I’m most concerned about.
I mean I won’t be sniffing straight above the bottle or anything like that.

Generally when she’s helping I’m making zero nic batches, but some times I do make nic bottles for my travel case 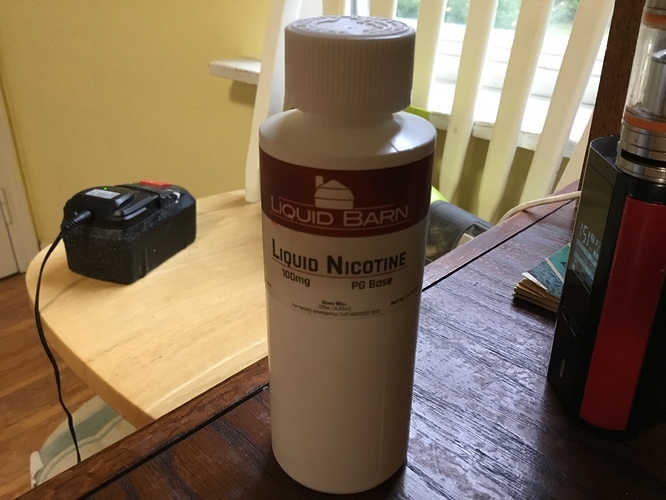 With proper safety precautions 100mg liquid nic is no different than any other chemical you have in your house around your children. 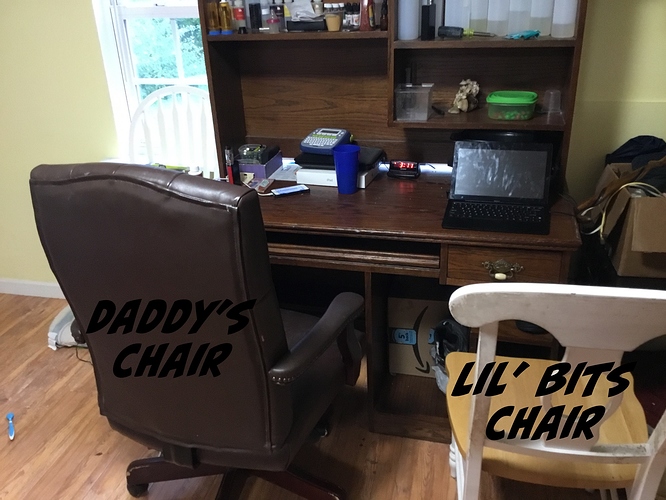 Edit: tablet is mine but my 2yo has taken it from me . Seems to think it’s hers

That depends on how much you order. I never order less than 1 Ltr. @ 100mg.
I always break down the nicotine into smaller (60ml) glass bottles and store them in the freezer. The reason you want to do this is, by breaking it down into smaller glass (glass is better to store in because eventually the nic will start degrading the plastic bottle) bottles is, every time you open that larger bottle, you expose the nicotine within to oxygen, which will cause the nicotine to … what else …
Oxidize. By putting the large bottle into smaller bottles, there will be less nicotine that will oxidize when you open the bottle.

I’m kind of a cowboy. I really Should wear gloves because nic absorbs into skin extremely quickly (but I don’t). I AM carefull to do my nic first and then reclose the bottle and set it aside with the syringe used for it. Unless your flinging your nic around and trying to make soap bubbles with it, I can’t imagine the tiny amount airborn would pose any danger. It has never harmed or effected me even after several hours hunched over my mixes in a poorly ventilated room. All that said, don’t get it in your eyes or mistake it for jelly in the fridge and you should be fine. You will know if you accidently put too much in a mix, not pleasant but not life threatening. I know it’s overwhelming to get started but if I didn’t poison myself starting with a graduated cylinder and a cowboy attitude, you and a scale should be A-OK! Good luck and don’t forget the most important part of mixing your own juice…Have Fun! It’s gonna be alright (or it’s gonna taste like crap and you won’t make that recipe again). Peace.

I was reading up a lot and decided to dilute it down to 36mg.

Any tips before I go ahead with the dilution?
Should I be shaking the nicotine beforehand to avoid hotspots even though it’s 100% PG?

And I was wondering if it will blend together quickly seeing as it’s 100% PG, recommended wait time?

Yes, shake it, then shake it, and then shake it some more. After diluting it, you shake again. As long as you know the job is thoroughly done, you don’t have to wait to mix with it.

it’s always up to the users if the users if they want to use safety gear or anything else, i don’t have a mood to judge anyone for doing or not doing it or something like that, but it’s always a good idea reminding that nic is a toxic thing and shouldn’t come in contact with skin and most importantly eyes and we shouldn’t take it so lightly, specially when things as this are at an inexperienced user hands, that’s all

So I diluted the nicotine to 36mg the other day. Made a few mixes and can’t help but think the nicotine hit is a little more potent than the store bought juices, especially the throat hit at 70vg to 30pg.
I normally buy juices at 75vg to 25pg at 3mg.
I’m mixing at 3mg, shook the diluted nicotine a bunch, it is a pg base so it was quite easy.

I’m wondering if this is normal for first time transition or more of a hotspot from the dilution process?
Besides that, flavor is on point, no problem with muted flavors.
Thanks everyone who helped got me to this point.

You may find that nicotine from different suppliers produces a different throat hit. This may well be what you are experiencing. It all comes down to extraction process and purity.

You may be right as I don’t know the source of the nicotine that the particular store uses.
I’m using NicSelect from LB and so far I’m pretty happy, clear and potent as it should be.
Might have to reduce the nicotine next time or pg ratio for starters to see how it differs. Got a lot to learn still but so far so good. Just wanted to make sure it’s not something more than that.

You may find that nicotine from different suppliers produces a different throat hit. This may well be what you are experiencing. It all comes down to extraction process and purity.

I’d have to agree , I prefer liquid barns nic

Maybe because I started with liquid barn , but same mix mixed with nic rivers nic just don’t taste the same…