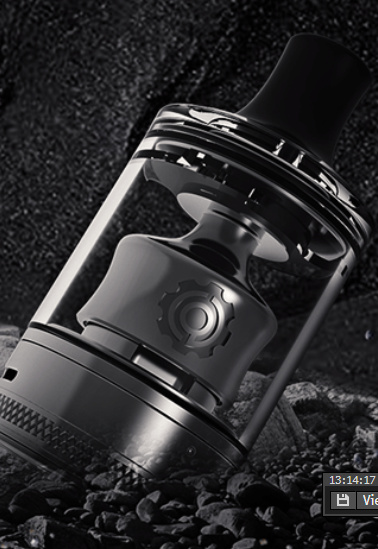 Another collaboration between Wotofo and SMM. I have liked the previous collabs between these two flavor chasers so i was excited to try this new product. To be clear i am not an MTL guy, I was never a smoker and just dont need the analogue sensation, or the high Nic. Last time i took a blast on anything higher than 6mg I pulled a whitey of amsterdam proportions. Only a pint of water and some fruitellas seemed to help clear the pale look from my face and the sweat from my forehead.

Now onto the nuts and bolts…and cogs of this little chappie. I say little as its a 22mm diameter 3ml, 51mm high tank. 2ml capacity of the TPyawn version. Its very light due to the innovative ‘Food safe’ PCTG tank tube…i am not a poly carbon fan…i drink scotch out of a thick glass, because i like glass. Its clean, transparent and will hurt me if i dont look after it right…much like my wife.

The food safe bit is puzzling, as is the warning not to clean it with hot water, that was a red flag for me that it may not be the muscle car style tank i am used to… However being food safe, if u get fed up of queing for the supermarket, 2 metres from the next masked individual, you can always eat your tank.

I unwrapped all my little wotofo packets of extras like a kid on xmas morning, and started building. 2 mins later i was coiled and wicked. This is one of the biggest pro’s of the tank for me. Its pure simplicity to build on and wick. And i could be wrong, but the MTL market is generally for the older vaper or less experienced newly quit smoker, hence simplicity is key and this is a great tank for that reason. The drip tip is perfect for that cheeky side lip draw that i see many an MTL’er perform. 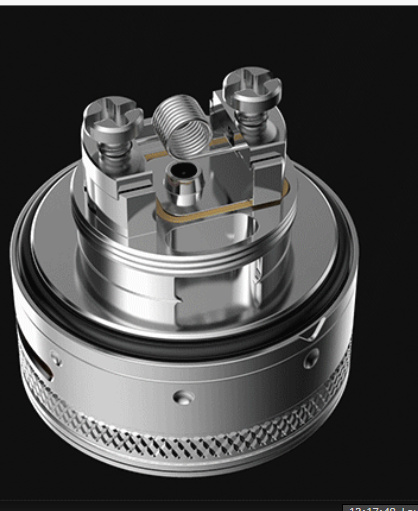 The Spring loaded deck makes coil positioning a breeze, and the wicking is as straightforward as an RTA gets. You get given the usual extras plus 1 dual core fused clapton 0.8ohm and 1 single strand coil NI80 1.2ohm. I was a little unsure how much power to give these being new to MTL, but 20 watts seemed enough. The vape is restricted as u would expect with decent flavour and unexpectedly generous vapour production. I cant really compare it to another MTL tank as i havent used one. 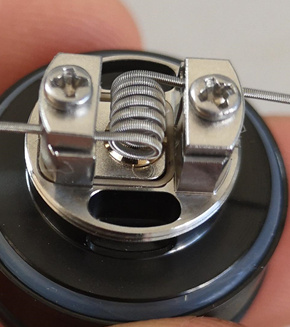 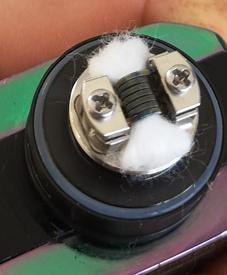 The big innovation here is apparently the geared cog airflow system. I can’t lie, i just don’t get it. To me airflow is airflow and i cant see how the cog really helps direct air to the coils any better than honeycombe airflow. The coil is fixed in position, and i want air to hit it from below. Its the amount of air that i think makes the difference, not the way it gets there. That said i love the look of the cog workings and especially the transparent base so u can see all the gubbins moving in front of your eyes. This will really stand out to the vaping watch collector who likes to see the internal movements doing their thang. 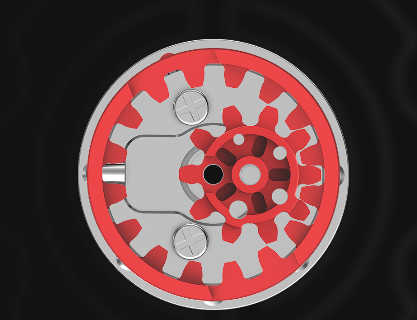 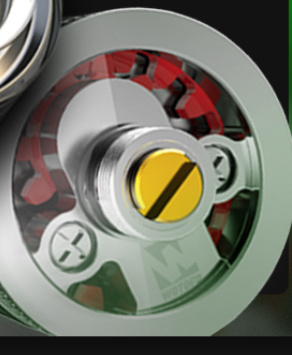 So what do I think…its simple to use…I would bet my bottom dollar that a blind man with asbestos fingers could even wick this and coil it well. It doesnt leak. It has decent flavour and clouds, really nice zing vaping on chefs flavours tickle me pink juice. Smooth tight airflow too. Its MTL so its never gonna juice me up so to speak…but i can see why people would like it. Switch out the poly for glass, maybe an easy improvement.

Tank you for reading

What’s in the package

However being food safe, if u get fed up of queing for the supermarket, 2 metres from the next masked individual, you can always eat your tank

Nice, thanks for the review. This is one I have had my eye on and was hoping my sponsor was gonna send it but it looks like I’ll have to get it myself. I love me some MTL.

I must confess I didn’t read through the entire review only because I have no real interest in MTL devices. But just wanted to say thank you for doing it and for sharing your thoughts in the forums.

Nice review. Looks like the deck has room for big diameter coil. What diameter are the supplied coils? Nothing came with it to explain the Cogs? Is it something you can adjust or does it move with air draw? I don’t get it either but it does look cool.

Very nice pictures you include in this review👍

The cogs are at the bottom and you can move them to adjust the airflow as u would on a normal rta with bottom airflow. The supplied coils are small. 2.5mm inner diameter

It looks like as you turn the afc ring, the cog rotates around to give a tighter or looser draw. Depending on the clearance of the cog to the bottom of the deck, you’re either going to get a nice tight draw or you have a replacement for your Cap’n Crunch whistle

To be clear i am not an MTL guy

Nah me neither, but I really enjoyed this, Great Review!

As I understand it from Matt’s review is that AF from ring vs AF from cog adjustment is an air pressure matter. The cog is supposed to replace the need for changing out inserts. What I don’t understand is that the diameter of the AF intake tube remains the same. An insert changes the air right at the coil where it counts. If the cog is situated at the bottom of the intake then don’t we essentially have the same air pressure problem as we would have with an AF ring? I’m not sure I completely get this concept and need to ask Matt for further details. I have plenty of MTLs from Kayfuns to Cthulhus and AF at the coil is the determining factor…for flavor and draw. There are very few (maybe 2) RTAs that can pull off double duty…MTL and RL/DL.

Thanks muth. The cog has a lot of us stumped so I will ask wotofo for a proper explanation from smm

Looks like it’s basically an internal AF ring with 5 different AF adjustments directly below the coil, at first look I thought it was like spinning gears in there as you draw, (which would be pretty cool🤪)
From Wotofo;
“Though the air hole on the base ring can be adjusted, traditional MTL RTAs take air from the base interior with one-size inlet to the coil, which actually is still not truly regulated airflow control. The COG, utilizing gear mechanism, has 5 different internal air inlets that accurately control the amount of air and path approaching to the coil, giving MTL users customized draws for real.“
“The COG MTL RTA has an innovative gear mechanism for very precise air tuning. Simply twist the base to fine tune your perfect draw. As the base ring moves, the mechanism transmits the rotary motion to the internal gear which works like a revolver cylinder, aligning 1 of the 5 internal inlets with the only passage that directs an accurate amount of air right underneath the coil.“

passage that directs an accurate amount of air right underneath the coil.“

Yes, but according to @Cloud98 and the diagram, the cogs are at the bottom of the air tube and a distance from the coil. The way I figure it, the air gets restricted through the cog (at the bottom) then is released into the larger air passage tube on up to the coil. By then, the air pressure has been dispersed and no longer tight and focused. At least, this is the way it looks to me from the diagram.

There are very few (maybe 2) RTAs that can pull off double duty…MTL and RL/DL.

Which ones are those?

By then, the air pressure has been dispersed and no longer tight and focused. At least, this is the way it looks to me from the diagram.

Good point. I’m gonna have to go watch Matts review. Sounds like I want one of these. Matt is pretty good at designing decent equipment.

“i could be wrong, but the MTL market is generally for the older vaper or less experienced newly quit smoker”

It’s also for those of us older (more experienced) vapers that like both MTL and DL, but tend to buy the budget end of the scale atomisers for work/beater use.
im just as happy with 0.8 fused clapton builds in my mtl rtas (loose mtl), just as much as my 0.16 builds in my rdas (restricted DL)… loose DL is pretty much flavourless and pointless unless your just looking for obnoxios clouds bruh.

it looks a decent enough atomiser and its basically a mechinism to adjust airflow and abit of a gimmick imho.

The way I figure it, the air gets restricted through the cog (at the bottom) then is released into the larger air passage tube on up to the coil.

Yuppers, that’s what I see, (You quoted my quote from Wotofo description) basically just an AF ring (moved closer to the coil) with some COOL factor. Not that I’m gonna rush out and get one, will be interesting to see how it pans out😎

most reviewers are of the opinion that tha afc does not work well.