Eight vape is so frustrating

Bastards send me deals and after I spend 4 hours telling all my friends about it so I can help them order stuff and when I go back 4 hours later everything’s different.
I just spent a fair amount of time complaining to them about time I wasted messing with them so I will waste no more time other than to say…eightvape is a pain in the ass. 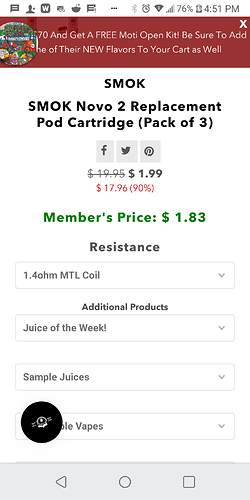 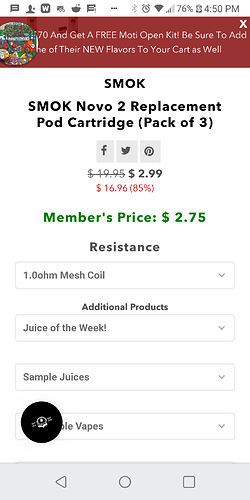 Screenshot_2019-10-25-16-51-00.png1440×2880 392 KB
Note the time of the screenshot. 4:50 pm on a Friday.
Now, I call friends who know little about vaping and its websites, but they enjoy rigs I’ve provided them to get them off cigarettes and when I tell them at 6 that night they wonder where the deal is, in the meantime I’m looking up other stuff on eightvape to take my order to 50 bucks so I get free shipping and I get a cart put together and none of it is real.
Anyway.
Element vape. Much more real.
Amy others?
Giant vapes. Some things over priced, but never forget.
Ecig express, not perfect, but not deceitful.
It shouldn’t be this hard.
3 Likes
Dan_the_Man October 26, 2019, 5:32am #3

I have heard of people having issues with them but I have never had a problem. you should keep an eye out at this thread.

Thanks for the coupon!!

I’m addicted to that thread.

Not sure I understand the purpose of the thread. All online shops have deals that come and go and they can change prices very fast…

Sometimes some sites only announced their discount by email to members

And sometimes someone found the announcement earlier than everyone else

I guess so. It’s happened to me as well but I usually blame myself and not the shop

Miss a deal, wait a little and a new one will pop up. Are you in a hurry, pay the full price. It’s just the way online shops work these days.

Are you signed up for eightvapes flash deals ??? I wonder you loaded something that way??? Ive missed deals from them but they are still a fantastic place to get great deals

I’ve not had any issues with eightvape but they don’t generally have much on the flash sales that interests me.

Im so picky atm, and I have never bought anything from 8vape.

Ya its usually commercial juice now that I think about it

I just got an asmodus almighty that was on sale in from them, 4 buisness days from order to delivery. My cousin gets most of her backup gear & coils from them as it goes on sale.

I just ordered from Eight Vape. Numerous transactions in the past and I’ve never had a problem. My only minor issue w/them is their processing time tends to lag behind other vendors.

Bottom picture is Mesh coil, top is MTL. That could be the price difference, but I’m not sure. They sure do change things up at the drop of a hat though.

I ordered from them a few times and had no problems then one time had serious issues they never sent half of my order and I couldn’t get anyone on the phone and they never refunded me even after I finally did reach someone by posting on the Facebook page… I don’t care how cheap they are I will not buy from them especially when having bake sale that’s when stuff gets crazy with them but yeah I just can’t after you can’t get in touch with anyone either!

I haven’t had shipping issues. My only beef is that I always seem to miss the sales…always out of stock. This is just after seeing a notification or some other advertising. I was starting to think it was a ploy to get you to the site

But all in all I’ve had no problems and I’ve got some good deals in the past.