Ok so I have been vaping an original bunny clone (v1 I think) an I let it breathe for a day then steep for a week and a half. Started vaping the batch and everything was fine, don’t know if I’d say it’s an accurate clone but it was good. Then I wake up and the whole batch (in three separate bottles) has darkened and the cake batter part of the flavor is almost totally gone. Further more it has a slight burnt taste. I figured maybe my atty (aspire cleito .2 ohm) needed a new coil so I swapped it out saturated the wicking and primed the atty and it actually tasted worse. Never changed the wattage on my rx200 during this whole time. I know the darkening can be the nic oxidizing but the flavor change is what bothers me. It’s not unpalatable but it just tastes sweet and a little burnt and very hard to detect any of the flavor that was there yesterday. Also, the ejuice left in the tank over night was just fine, it was the bottled juice that was off. Any ideas? I’m not finding anything that matches this set of issues

Interesting. Not really sure on this one. Are the bottles glass or plastic?

EDIT: Also, got pics? And is the juice in the bottles cloudy at all? Any chance they got switched somehow with something else?

Glass, and all sterilized before I started

Is this the recipe you used

And did you make any subs? 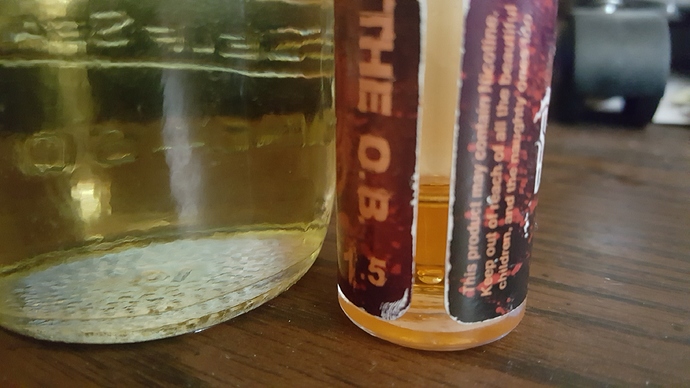 That is really weird. Did you fill the tank or vape anything between fills with this that might have contaminated it somehow? Did you shake it well every time before you filled? Where was it stored?

This is the only thing I’ve seen that would be similar to what you’re experiencing.

Nope same juice nothing in between. I’ll admit that I didn’t shake it before filling the tank initially but after the flavor went weird (after replacing coil) I did shake up the bottle before refilling. And I shook the bottles for a good 5 minutes when I originally mixed the batch. It’s been stored on a shelf in my relatively dark and cool basement.

Possibly the nic concentration wound up a little bit higher somehow; maybe a nic hotspot that didn’t get blended in properly.

The other thing I’m thinking is as you take liquid out of the bottle, you’re letting more oxygen in to the bottle. The little bit at the bottom of the bottle is/has been exposed to more oxygen than the liquid in the smaller, more enclosed tank.

Maybe someone else will weigh in here. Oxidation or nic concentration are the only things I can think that would cause a color change like that in such a short time.

More or less that’s what I’ve been thinking too. I get how sun heat and oxygen can cause the color change and an odd to bad taste change. I guess the part that throws me is a loss of flavor, I would understand if it tasted like it added a weird flavor but the weird flavor replaced most of the flavor it had. Most of what I’ve read was that oxidizing changes color and a few minor mentions of flavor change but all of that was related to nicotine, in this case it seems to have effected the flavoring itself. I’ve never had this happen before. I’ve had them get weird when left in my car but the weird flavor is on top of the original, not replacing the original flavor.

Gah, sorry false alarm, the old coil was a mess when I tore it apart. I think I had a bit of residual contaminated juice in the tank after switching coils and the flavor is improving as I vape. It seems it was just the coil.

LOL well there ya go. At least ya got it sorted and maybe this thread will help the next person who comes along and has this problem.

Just remember with custards they do hit acouple peaks and valleys on flavor. Sometimes I do get a touch of burnt sugar from cap and or tpa custard before its fully developed and aged.

I guess we have ruled out Gremlins?

A gremlin is a mythological mischievous creature. Lydia is the gremlin king’s representative in the human world and she has magical duvet stealing powers. She is also known for her abuse of Goblins. Gremlin or gremlins may also refer to: