Enough is enough...beware of gearbest!

I tried doing this the nice, peaceful way, but forget it now! Gearbest is on my personal shit list, and everyone here should be aware of their shady business practices.

So, over the 4th of July weekend, I decided to purchase a couple of RTA’s from Gearbest.com

These RTA’s are listed as “SER” V4, meaning “ShenRay”.

All The pictures on the reviews also show people with authentic ShenRay RTA’s. 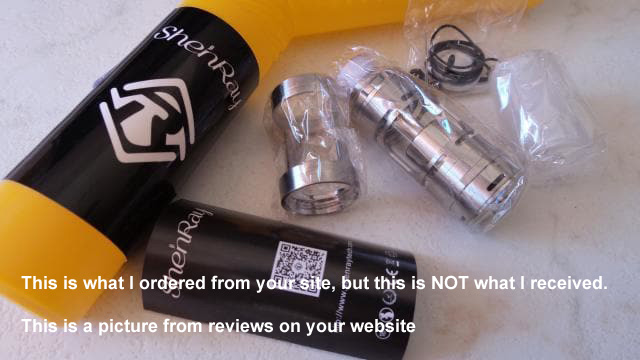 Great, so I decided to order 2. A week and a half later, I get my package, and immediately noticed that I did not receive the RTA’s in the authentic packaging.

This is what I received: 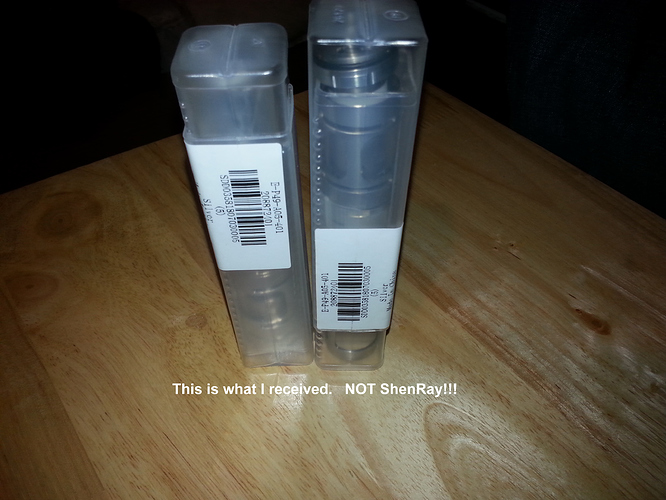 Hmmm, that’s strange, but might still be OK, I thought. NOPE!

Juice Flow Control would not work, and upon further inspection of both RTA’s I noticed this on both tanks: 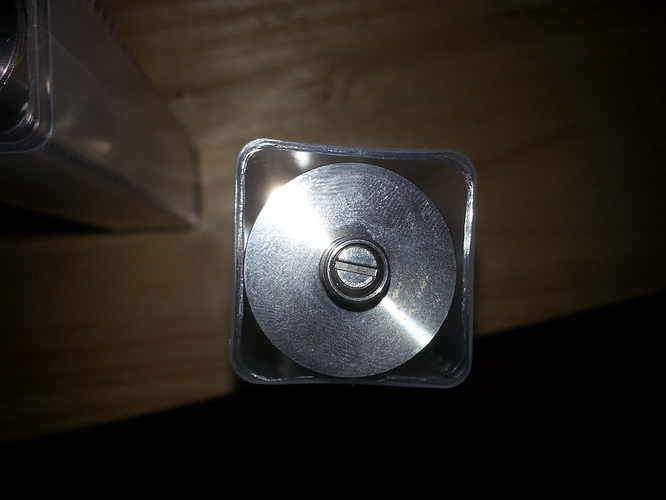 The center pin is not centered because the whole base is not fitted properly. It does not screw in properly. This is on both tanks, which makes them unusable.

Very poor quality here, so I compared it to my authentic one that I have, and noticed several more differences. Upon further inspection of the new tanks, I noticed that the ‘spare parts’ bag had another clone manufacturers name on it, and that’s when I realized I had not received authentics.

Not happy with the 'ol switcheroo they pulled on me, I opened a support ticket on their site, AND also reached out to them on the forums to try and resolve this peacefully without posting ANY of this publicly.

After providing all the proof they requested, they would not offer me a refund, so I opened a dispute with PayPal. Here is where it gets me infuriated…

After opening the dispute with PayPal, they first offered me a “partial” refund of $6.18. Really?! You send $30 worth of fake goods, and offer me a partial refund for $6??? WTF?! So of course I declined it.

Fast forward to today, and I receive a nice little response on my ticket stating that they will offer me a full refund for $30.90 but, ONLY if I close the ticket. 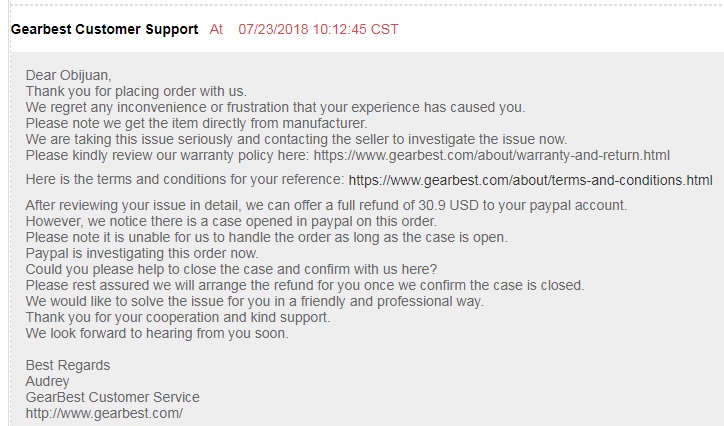 Again, Really?! WTF is this shit? Hey Gearbest, FUCK YOU! I AM NOT CLOSING THE TICKET.

If I close the ticket, I have no way of getting my money back.

Fuck these shady assholes. They are on my shit list, & I will not ever buy from them again, but wanted to post this so others are aware of their bullshit practices.

If anyone has a similar problem, DO NOT CLOSE your Paypal dispute. Paypal will not help if you close the ticket.

Geez, how fucking stupid do they think people are?! FUCK YOU GEARBEST!

Tell us how you really feel

I had a similar experience with them. I haven’t bought anything from them in years, and I alway try to dissuade people from patronizing them. Ya, totally sucks.

Unfortunately it was my first time purchasing with them, but never again.

You’re like a bad penny. I thought you had become fish food, or fertilizer, or something useful like that.

While I have only used them once, successfully, and got the correct item quickly, nonetheless it is tales like this that will give me pause when considering using them again.

Well after this experience, I will not be ordering anything from China ever again.

Saving a few dollars, is not worth the aggravation IMO.

I’ve ordered with several different vendors in China, and basically you have to hope that there is nothing wrong with your order, or else you’re screwed.

Not the end of the world for me, I mean it was only $30 but it’s the shady way they tried to handle this.

They pulled a blatant bait & switch tactic, and I will not just keep quiet about it. I even tried to be nice about it, but now, screw them

I was kind of being tactful, but inside I’m thinking a lot of the same choice words and sentence enhancers you picked. In other words, there are too many vendors out there to put up with crap like that.

I thought about making this post, and held off, until i got their latest response.

I mean all I asked for in my email is the correct products, or my money back. That should have been taken care of without issue, but since they want to make this difficult…

BRING IT ON BITCHES! LMAO

@June is there any chance you can help our friend out here please?

I know you won’t like that answer, but I’ve worked in retail many years, and there’s a way of getting a point across and giving a business (vendor/store/services etc. I’m general) the chance of fixing it.

I sadly see neither of that, besides you telling them you want a product now or money back. the tone plays the music, is a common saying, and sadly the truth. If it were worded differently, the outcome might have differed.

I’m not siding with any vendor, in fact I had my share with that as well, but the webpage doesn’t label it as authentic. Maybe the reviews do, but that’s not part of the advertisement.

Gearbest as well as other China based vendors, normally mark it as authentic in the title (example here: https://www.gearbest.com/electronic-cigarettes/pp_104356.html?wid=1433363)

not in fine prints or whatever in their regular product policy or somewhere else.

Unless it has been changed for this product in particular, it was never marked as such. Therefore getting a full money refund offer by said vendor or via PayPal is called luck lol.I

I do appreciate the heads up tho.

@Ken_O_Where
I tried contacting June first. It was to her I wrote that msg. She told me there was nothing she could do, but after I filed the claim with Paypal, THEN she wanted to help…pffft

What is “SER” then? The tank they actually sent was from Steam Tribe “ST” I believe??

I would NOT have ordered it if it was labeled “ST V4” RTA.

And they do claim that all their products are genuine and authentic: 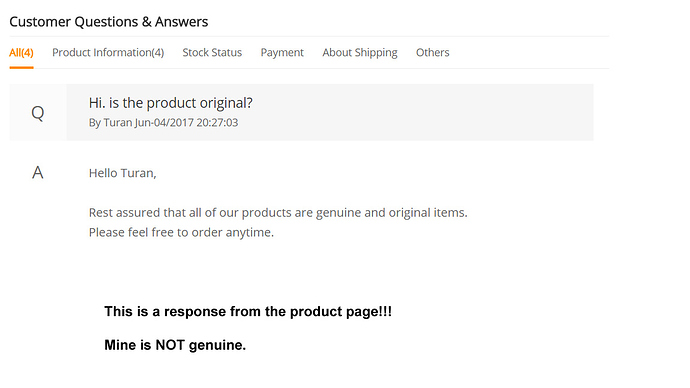 What you received is packaged like the “styled” version that Fasttech sells… Pretty shady.

Best of luck to you.

I’m sorry to hear of your troubles… I’ve ordered several things from Asia (China, Hong Kong, Taiwan, Japan among others) and I’ve never had a bad experience. Well, perhaps I wasn’t always happy with what I got but I always received the product I bought.
Gearbest seems to be a little bit like Amazon though, they work with independent vendors that are not directly under control of Gearbest (same with ali express and others). I’ve bought multiple items from them and they all arrived in good condition within a 2 week period with free shipping.

I did have several bad experiences with local vendors, the latest was a problem with a scale I bought from Amazon, it didn’t work properly (weight just kept creeping up the longer you waited) and they didn’t want to give me a replacement or full refund either.
I just took the partial refund, left a bad comment and ordered a different model from a different vendor. €9 wasn’t worth wasting too much time over…

IME you can have bad experiences no matter what location you buy from. So to shield myself a bit from it, I now do quite some research and am very unlikely to do any impulsive purchases (unless I know the shop very well).

And I have to side with @eStorm a bit too. If you want to get something done from people, no matter how disappointed or pissed you are, you should watch the tone you speak to people, don’t offend people before they even had a chance to help you. I’ve worked in support for many years and people who come in with a bad attitude or blame support for stuff that is out of their control, those people get to go the long way round each and every time. That’s like an unwritten rule

LMAO, There goes another vendor before it starts. I just sent a note to June saying I would help out with reviews if she liked. Oh well, time to send another note resenting the offer. I can’t enable this kind of activity. Oh well…

Is this Shenray company a clone manufacturer? Cuz they didnt make the original Hadaly RDA.

PS: If im being stupid please let me know.

I apologize but I am rescinding the offer. A member of this forum just brought to light an instance where Gearbest misrepresented a product and would not make the situation right. I am unable to endorse or enable such behavior and can not in good conscious to reviews for gearbest."

Nobody needs this kind of activity. Nobody wins in the long run.

I thought about making this post, and held off, until i got their latest response.

I mean all I asked for in my email is the correct products, or my money back. That should have been taken care of without issue, but since they want to make this difficult…

BRING IT ON BITCHES! LMAO

@obijuan I appreciate you putting up all the info, not just a basher.

I will not be ordering anything from China ever again.

Actually I have used FastTech a lot of times.A few years ago they were slow to ship. but recently I am averaging less than two weeks (when the post office doesn’t sit on it for an extra week). I have not had a bad experience from them and definitely don’t intent to shut them all out based on Gearbest’s actions. Just saying.