Hello community. After all that news about the epidemic in China, do you dare to buy stuff from there? What do you think and do people?

I could be wrong but I don’t think inanimate objects have the ability to carry a virus.

I wouldn’t be worried about getting sick but would be a bit concerned about delays in shipping.

Delays at Fastech, would anyone notice? Viruses have different lifespans outside the body. The odds that it could survive the journey are pretty slim. From a quick check, as long as you’re not buying carpet. It only lasts for 48 hours at room temp on an inanimate object.

My vaping humor meme of that day… 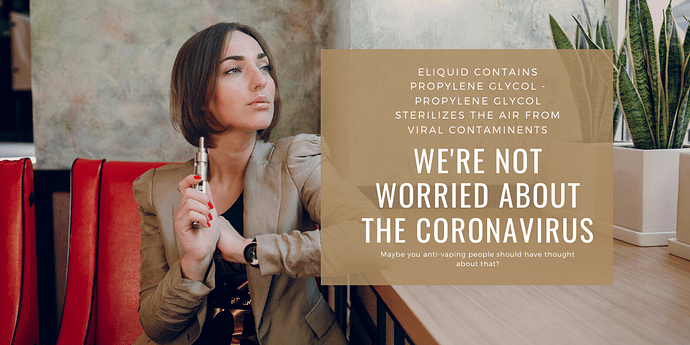 I posted a statement from the CDC about that in the Coronavirus thread. Sorry, I don’t have it at my disposal at the moment but just google the question and you should see CDC results. The basic question was about China packages.

Inanimate objects cannot transfer the virus according to a disease expert who was asked that specific question.

I’ve been waiting for an order placed on new years eve. it got as far as Zhengzhou and has been sat there ever since.

I think they are still shut so no-ones in to answer emails either.

I posted a FT announcement on another thread. Basically, they’re working with a skeleton staff so operations will be slower right now. Should resume as normal by FEB. 10

my orders are stuck too… need some more stuff but don’t place my orders. want to see if i’ll get my old ones

I’ve gotten an order placed before the virus hit USA hard and one on the way. We’ll see what happens.

I ordered from Fasttech on April 17, showed shipped April 22, just made progress to something called Zhengzhou EMS China toady…

they seem to be shipping ok now.
i ordered from there 2 weeks ago using the expedited shipping option for $4 something and it arrived in australia yesterday.
I still have 3 or 4 orders from other chinese sites made going back over 2 months ago sitting in shipping limbo somewhere though.
Similar message in tracking, departed gangzhou i think it was.
I had a couple of orders that were made a few weeks after the others, show up last week on a sunday so its all over the place.
One seller was telling me the shipping companies wouldnt even collect unless all their staff were decked out in hazmat suits. That was when china was in the middle of its outbreak though.
I got an email from our national postal service the other day saying there are millions of parcels back logged and they are operating 24hours, 7 days a week to try and catch up.
Depending on where you are and what countries the post option used goes via, it could be stuck at any stop along the way.
3avape and everzon started using singapore post to australia for some reason instead of china posts epacket and singapore was basically closed so im hoping that is where my delay is.
Many countries around the world have imposed border control restrictions and airlines have greatly reduced their flights so fingers crossed parcels will eventually get there.
The chances of any virus surviving for the time it takes to reach you would be near zero.
Perhaps unless you used a 3 to 4 day courier, even then it would be rare as rocking horse shit!

Wow!!! just think about it… we may become air fresheners!!! lmao 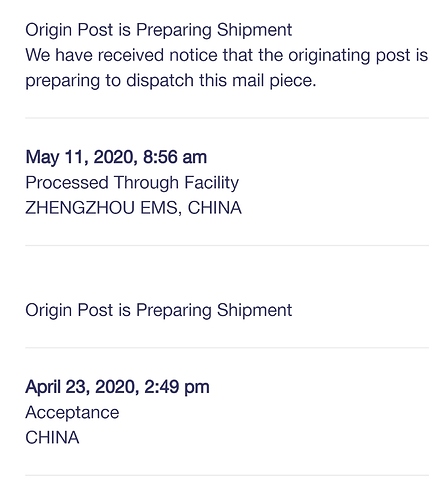 My FT orders are going on just over a month now. Sitting in China somewhere. Funny that my Vapesourcing order came in after 14 days.

I’ve got the same notice only dated May 1.

If Vapesourcing is affiliated with Sourcemore like I heard someone say then they have warehouses in various countries making it easier to ship sometimes.

My FT orders are going on just over a month now. Sitting in China somewhere. Funny that my Vapesourcing order came in after 14 days.

I’ve been hearing about FT and 3FVape delays recently.

Ordered 30th April. Shipped 8th May. Been sitting at the Beijing Airport since the 9th May waiting for a spare seat on the plane I’m guessing. Not panicking just yet 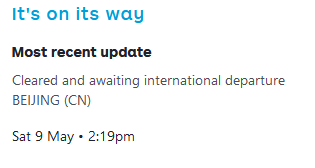