Ethos - Crispy Treats (who has the best Rice Crispies flavor?)

I bought the rare commercial juice yesterday when I was out. Most often I’m underwhelmed by them, and this one is just barely able to rank among those I would buy again. But what I learned was I need to get some Rice Crispies flavor. I could see that opening a lot of new doors for me as I quite like the flavor. Who as the best Rice Crispies flavoring? Anyway, I’m really liking this juice and as soon as I can get some flavoring I will attempt an improved version of it. Neat packaging, bottle and cloth - and at 50 cents per mil it’s a little cheaper than most around here. 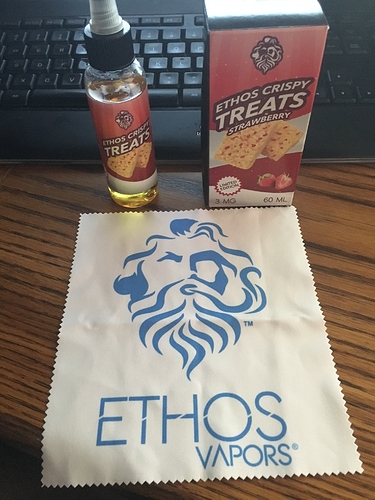 I’ve been wondering about a rice crispy flavor too. I’m starting to get back into cereal vapes now that I know more about how to make them. FW Rice Treat might be a good one to start with. CAP Cereal 27 looks promising, but that’s more of a corn cereal base I think. Not much help with that huh.

I definitely think fw is better than tfa.

@SthrnMixer, I like the TFA Rice Crunchies the best because to me it has a better flavor than others I have tried. I use it in a few of my mixes and it works well where I want it to. If you add it to a cereal mix it will add a really noticeable rich depth. It also works well with marshmallow just like a rice crispies treat.

I think I’d go for

*This flavor can be intense and take over the whole recipe I dumped a 100ml because I put the toasted marshmallow in instead of regular marshmallow
**another intense flavor I’ve never used over half a percent in anything. And it’s the flavor most people miss when they make a marshmallow treat juice.
***my personal touch Wifey loves them and I make them frequently. The vanilla just makes it pop a little

Off Topic: Beware when Enyawreklaw posts a vid on youtube about specific flavors because BCV will be out of stock. His latest vid is about marshmallow. So now I can’t get my CAP marshmallow… Thanks a lot Wayne!

Beware when Enyawreklaw posts a vid on youtube about specific flavors because BCV will be out of stock.

No offense intended, but that just doesn’t compute to me.

Would you consider changing the vanilla cupcake to TPA? And why?

NOPE, I have both butter cream is more like a gentle sweet buttery frosting.
Golden butter is like concentrated butter. Think corn on the cob, popcorn or better yet fresh homemade bread with tons of butter on it.

Really couldn’t say I’ve never had the TPA and use the CAP for some of my recipes.

This is one I made and it has a rich buttery taste like the marshmallow melted in butter. Give it a try if you like rice crispy treats.

I just seen this one today and added it to my favorites. I’ve made around 4 rice crispy type juices and eh. I will give this one a shot tomorrow, It looks good.

Did you make my recipe? If so what do you think?

This is my private recipe if any interest here, 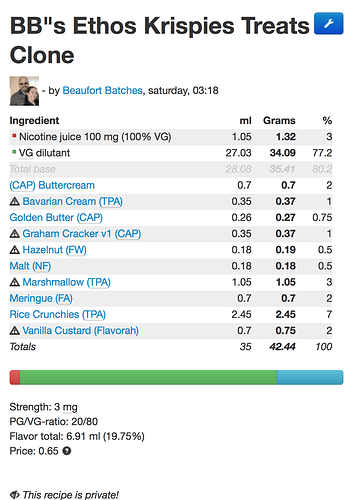 I have had the real Ethos and it’s really good. I’m still tinkering on this but I am really close with this one. Any help or suggestions are welcome if anyone is in the mood.

I’ve only had the strawberry which I thought was very good. Yours looks delicious though!

It’s really good but to be the plain Ethos Crispies Treats, it needs a little of something, it might be Brown Sugar.

looks good i like FW but i have both tfa and fw , i have 150 + flavors but no butter , do you suggest caps ive been really big on FA lately but cap has alot of great flaves

I have about all FW,INW,LA,FA, CAP and TFA flavors (the ones I want anyway) but if you want a sub for the best way I have found is to use FA Walnut at .5% and Nonna’s Cake at .25% together.