What does it do wrong with stainless? I use mostly nothing but stainless and it works great. I have heard there gonna have a update for the dna200 but what kind of problems are you having with ss?

I also use stainless and have no problems even with fused claptons. I have heard of people having problems but had none myself.

Personally, my experience has been “inconsistently consistent”.

While the TC protection aspect works perfectly (I never get a burnt cotton drag), the temperature is way off. I’ve attributed it to my learning curve this far, but this makes me wonder…

Using nothing but SS, one coil (let’s say 24g) and I’ll have to run the temps up to 500-550F, and another gauge (same wraps and ID, let’s say 26g) and I’ll have to use 420-450F. I have been experimenting alot though, so these aren’t verbatim numbers, just random examples, so don’t read much into the actual numbers. My point being, that so far, those are the only two gauges I’ve used, and neither has been consistent in the temperature readout coinciding with the amount of heat experienced. I wouldn’t think that (given how small the numbers are in going from 24g to 26g, that there would be that big a difference in temp change.

I also saw a workaround in the Evolv forums regarding SS, and while I got it to work (once or twice) my memory is already on overload with all the button press combinations that have recalled in setting things up, so I’ve just been bearing with the minor hindrance of numbers not being accurate, since I expect it will be addressed/fixed in a future firmware update. The main thing for me at the moment is having the additional safeguard of not breathing in burnt cotton. So overall I’m happy

Will try to post the link to the workaround shortly.

Edit: Sorry for the delay, had to help a friend with his vehicle, and then come back to the pc to find my screenshot/link for the workaround!

Now this ties into a couple of different aspects, but it might help someone else, and more importantly, does go to show that somewhere in the machine, there’s a ‘ghost’ that’s yet to be ironed out. It’s not just ‘imagined’ -yet I can’t (and won’t) say that anything is ‘defective’. Rather, simply put, I feel they’re still just ironing out bugs.

I will note though, that if it indeed does turn out to be a chipset limitation (given that the new 75w boards are being reported as working well with SS in TC mode), I’ll be a bit bummed.

Again, hoping that a simple firmware/software update does the trick for the masses that have the DNA200 boards!

I never was able to get it to flat line temperature like titanium then I worked on a DNA 75 wow dead on with ss much smoother after some digging I learned the 75 will do ss smother they just announced a limited release on the DNA 250 and one of the things they do bring up as it does stainless it ticks me off you know I mean how about the 200 it was supposed to ss all along and will do it okay but it doesn’t do it nothing like the 75 the difference is night and day it’s almost like using the other chip I’m not going to say no names and then use any DNA 200 there’s no comparison with titanium well that’s the way it works on stainless , sure be nice if they release the update for the DNA 200 I’ve been hearing soon a for a while but I keep seeing new boards I be darn they did do the up date will today is the day 8/8 2016 no more new stuff the regulations just started and I don’t like it

2 days ago · Edited
Evolv is once again proud to announce our new DNA 250 board. The boards are available now in extremely limited quantities. Because of component lead times customers will be limited to 1 board per device that they plan to release plus one board as a spare. We expect this to improve as component lead times improve.

The DNA 250 is the same size as the DNA 200, uses 3 cell series voltage input, utilizing the same mounting and layout for the buttons, screen, and USB with the addition of a few exciting features.

-Onboard reverse voltage protection. Big plus

-Smoother control system for Stainless Steel wire with Temperature Protection
(This is a firmware update and is also available for the 200, giving it a similar control structure to the DNA 75)

Spec sheets and models will be available some time next week.

Smoother control system for Stainless Steel wire with Temperature Protection(This is a firmware update and is also available for the 200, giving it a similar control structure to the DNA 75)

Great find and thanks for the update!!! =D

The closest I’ve been able to get it this far was within 18deg.F (and even that took a lot of monkeying around in testing different combos etc). But that was pretty damn close all things considered! Even still though, it bugged me when it was off by 40-60F (and more). For instance my last drag (while set at 460F and 54w -temp dominant), the last temp shows as 417F, and 43.2w.

The way I went about my testing almost confirmed that it had to be a firmware issue when combined with what I was reading on the various forums, so I hadn’t given up hope by a long shot. And also reaffirms the main reason that I:

All I knows I’ve tried spaced coils not spaced coils cussing not cussing praying not praying and everything else that could come to mind in the last 6 months since last update to get my SS to work with temperature dominant forget it if I run watts I can get a pretty close sort of like .then I helped a friend with a new DNA 75 here is the Graff 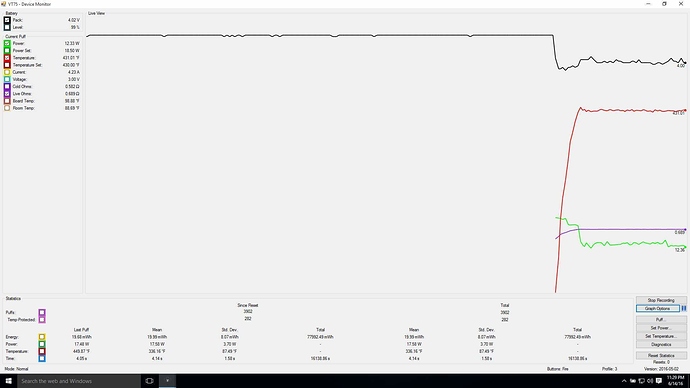