I wanted to open up a thread for the new users on the site where our experts here can give advice on cloning.

I am no expert but I have been mixing now for a while. My advice is to use existing recipes on the site that are highly rated and close to the taste of the liquid you are trying to clone.

Please others join in?

@Maureeenie
So one day your in a vape shop and make the mistake of asking the guy working the counter what his ADV is.
He pulls out a bottle and says this. So I try it and it’s an OMG moment and I buy a bottle. Mid way through the bottle I’m online looking to clone it as it’s stupidly expensive.

That lands me here and I find several identical copies of the same clone recipe and a couple not close. No problem I think I’ll just whip this up. LMAO now I have about 600ml of several flat out misses. None are dirty hamper bad but they didn’t come close to the mark.

Going back to the recipes and doing more date digging it looks like the original is off a French site and all the rest are copies of it. Back to square one I’m on test run 30 something working in tiny 5ml batches with much wider ratio mixes trying to get more in the ball park of the flavor. I’ve picked out the 3-4 primary flavors and keep changing the ratios but it’s god awful slow going. It’s stopped smelling like pure Pancake Syrup and the Blueberries and Whipped Cream are showing now but the French Toast dropped off. Are we having fun yet ? Hell YES !


What is playing in my head this fine morning.

One that I’m looking for since being a new guy is a juice I’ve gotten locally called “Demon Energy”. It’s supposed to be a mix of like Monster Energy drink and Red Bull. I really like the flavor. The one I get is an 80/20 blend with 6 nic in case someone does have a recipe. The nic I have to diy with is 48mg btw. Thanx in advance.

lol…I spent about 100.00 on flavors trying to clone Alpha Vape’s Chronos before I realized I wasn’t going to be able to clone it.

same with me and the elusive butterscotch popcorn, gave up, BB has made me something though and he’s sending it me over to try. very excited about that

I’m trying to make a redbull and lime for a guy but so far no luck, I tried FA mad fruit but the flavour just dissipated…not sure what went wrong there, back to the drawing board lol

I just ordered two of Walt’s sample packs. I will be playing evil vape chemist next week.

@Maureeenie, @Pugs1970
The wife got wind of the credit card bill and I’m on lockdown till the first of the month

and a closer budget after that. LOL
Damn I really wanted to order a Rhubarb for the Flavor of the Month.
So I’ve got an idea but I’ve only seen the flavor I’m thinking of used once and it’s not a small bottle. Amoretti Sour Cream, I’ve seen it in one of Kens previews if I remember right, Advise, recommends, hints, thoughts?
Bob

use existing recipes on the site that are highly rated

The best advice I can give is don’t try. If I find a commercial juice I like I will search for it on the recipe side. Most times I can find a good starting place and I tweak the recipe to my liking. In most cases I end up with something better than the juice I was trying to replicate. Making a 1:1 clone of a specific juice is extremely difficult. You could spend countless months and a lot of money and never get it perfect. I have the utmost respect to those that can do it. I however lean on the wonderful mixoligists here for my inspiration.

I did not have good luck with rhubarb Mr. Bob.

@Maureeenie, @Pugs1970
Real flavors is offering 2 free flavors all you pay is $4.11 shipping USA. Details on the real flavors thread
Got my Rhubarb on the way after all… Can use the code up to 3 times
Bob

yeah so I’ve heard, the RF SC anyway…it’s on the list

I already ordered this morning! (i paid too much for shipping lol because I didn’t know)

Got my Rhubarb on the way

Rainbow vapes have their order of SC in. I email them this morning

What Rhubarb did you use @Maureeenie? I have a Rhubarb and Strawberry Pie recipe that some fellow from South Africa messaged me to buy the rights to, here it is, 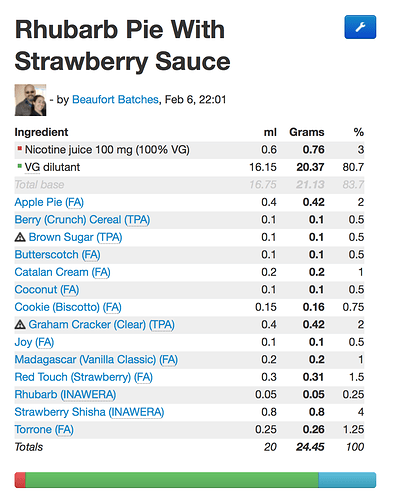 I told him if he wanted the rights to it that he had to donate 500 dollars to ELR when he’s ready, I won’t hold my breath but it is a tasty recipe.