Thanks for checking out my review of the Famovape Magma Box mod which was provided directly from Famovape. 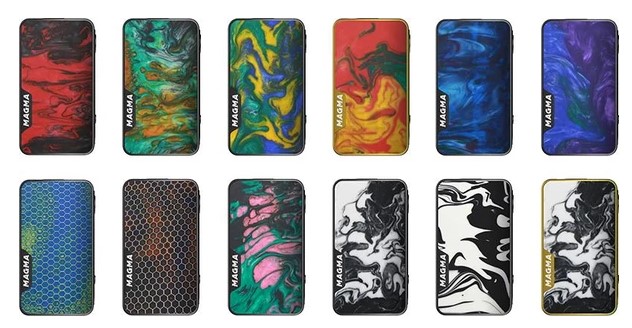 Getting to know the Famovape Magma mod

Famovape is not new but may be new to you, me as well since this is the first product from them I have ever had. A friend of mine had picked up the Magma mod and I have to admit, I liked the look of his blue resin mod so when they approached me I agreed to a review. I was also VERY impressed with Famovape when they read a post and responded: https://vapingcommunity.co.uk/t/think-before-buying-the-famovape-magma-update/1178/15?u=mjag . I don’t think I have personally ever seen a mfg respond like that and hope they keep it up.

I asked for the blue resin panel and as a backup, in case the blue resin wasn’t available, the black and white Shadow version. Guess the blue was out but to my surprise, they sent the Arcanom (blue/green/purple) and also the Shadow. 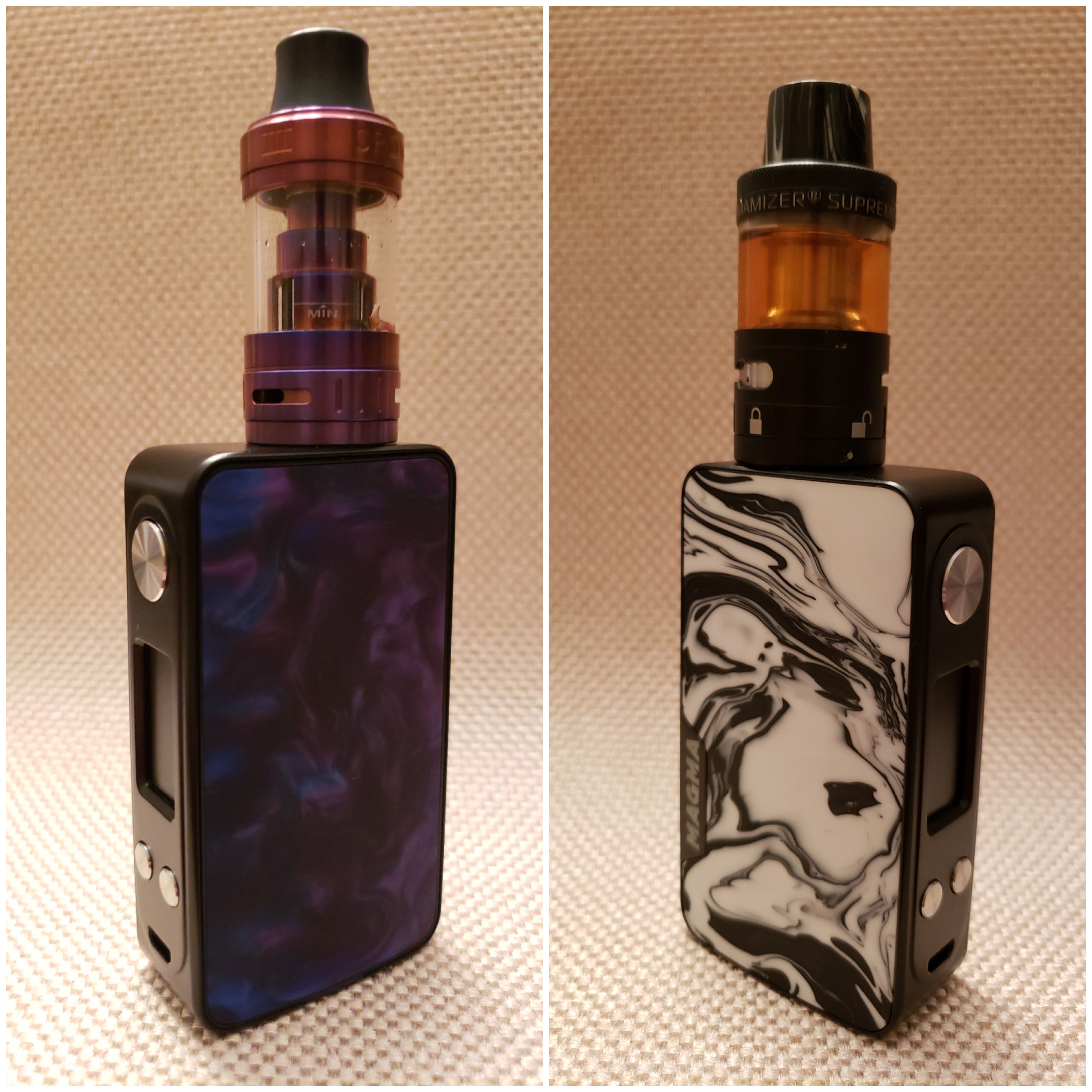 Lucky me, someone had given me a purple tank awhile back so finally have a mod to match……Win!

The 510 plate is slightly raised over the body, good for not scratching the paint but bad if you detest a small gap under your tank. Doesn’t look bad to me but something that should be pointed out.

Aside from the button rattle on the Arcanom purple version, it is a solid feeling mod. A little play on the battery door if you slide it with your thumb up/down and side to side but does not move unless you intentionally try to.

The 510 made good contact with every tank I tried and read the ohms pretty spot on. Not a lot of throw on the 510 pin but never encountered a problem with it. I do know the first run was afflicted with a 510 problem so I am glad they addressed it, gotta give a company props for addressing a problem and fixing it. I know my friends 510 was faulty and they sent him a replacement after they saw his post on a forum, very impressed with that. 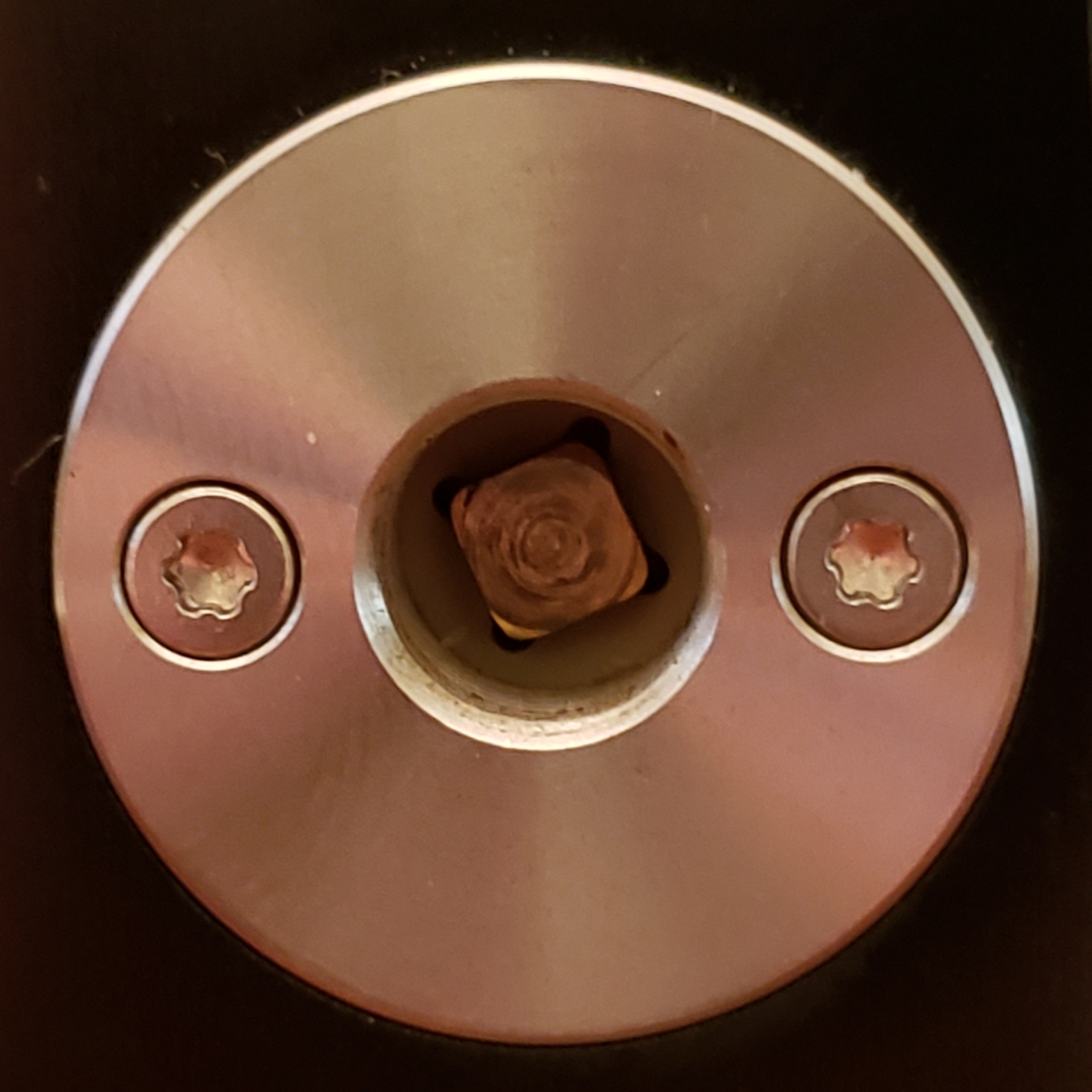 It is a simple yet solid mod but I still had to partially take it apart. I get joy giving Steampugs more nightmares of what I would do to his mods if he ever left them in my care……muhahahaha… 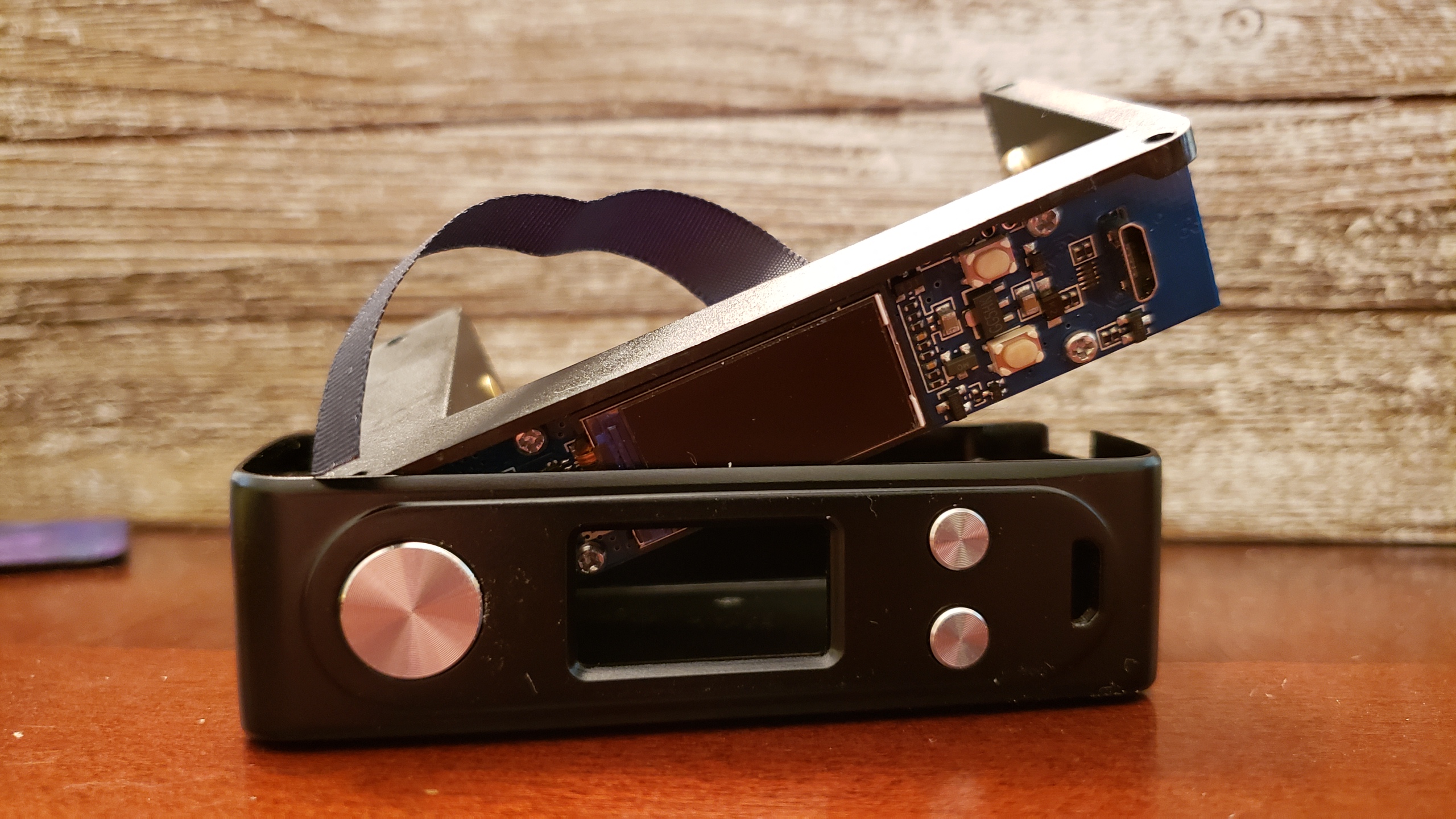 Wasn’t able to get a good pic of the 510 innards as the connecting wires are short. What I did see looks solid though. 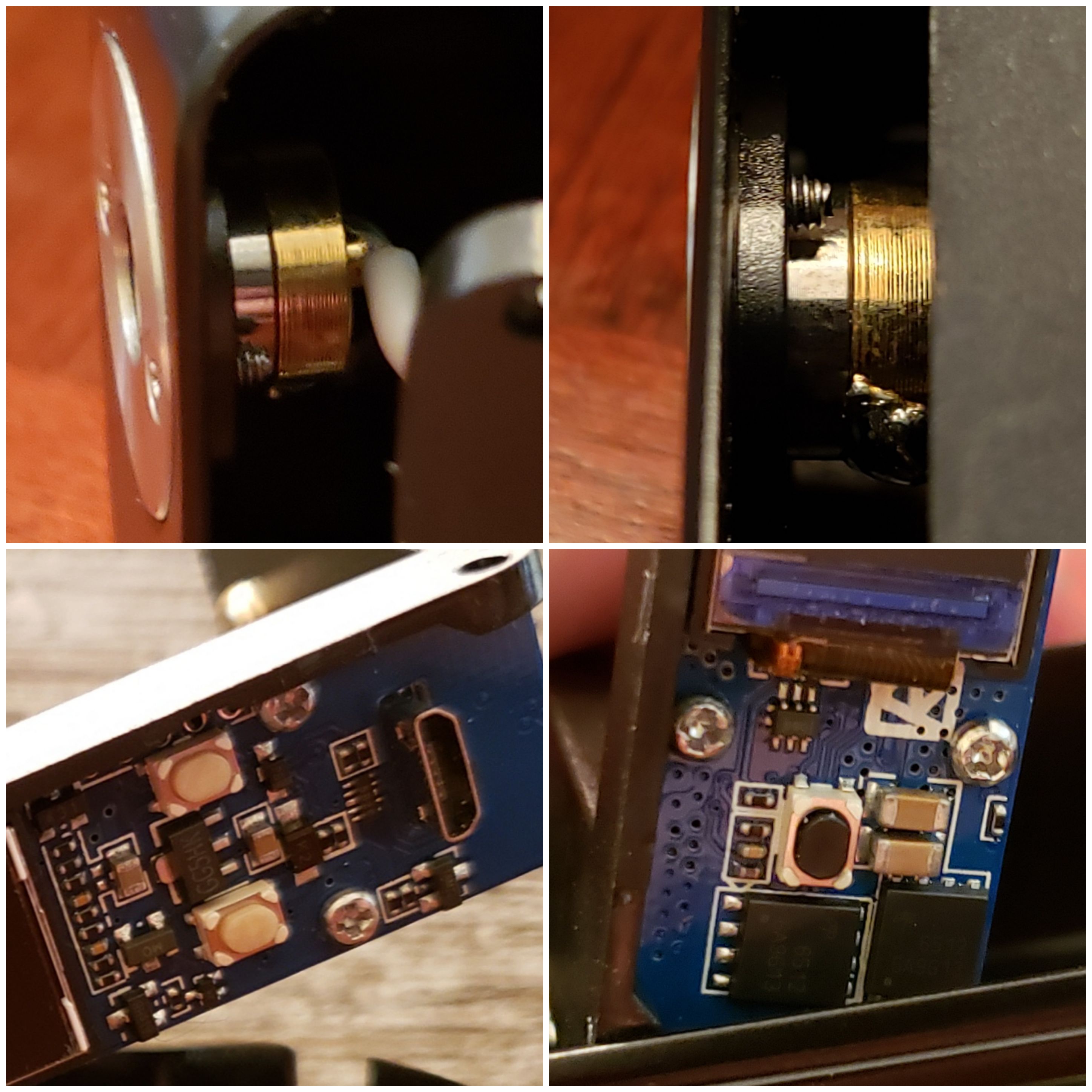 Nice and bright screen and you can change the color if you want. 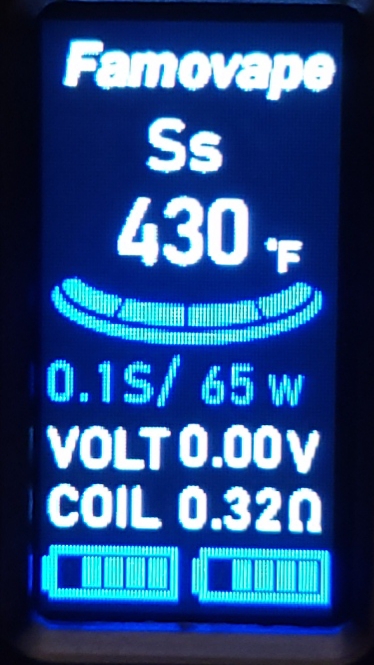 The menu system is simple enough, 3 clicks and you’re in to select modes like Watts, Ni, Ti, SS TC and Bypass. You can also select the color of the screen and clear your puff counter, that’s it. To adjust wattage in TC is it 2 clicks of the fire button but you are limited to 80 watts….ugh.

Overall I feel it is a clean looking mod and the fit and finish on both are clean and remained so during my 3 weeks + evaluation time. 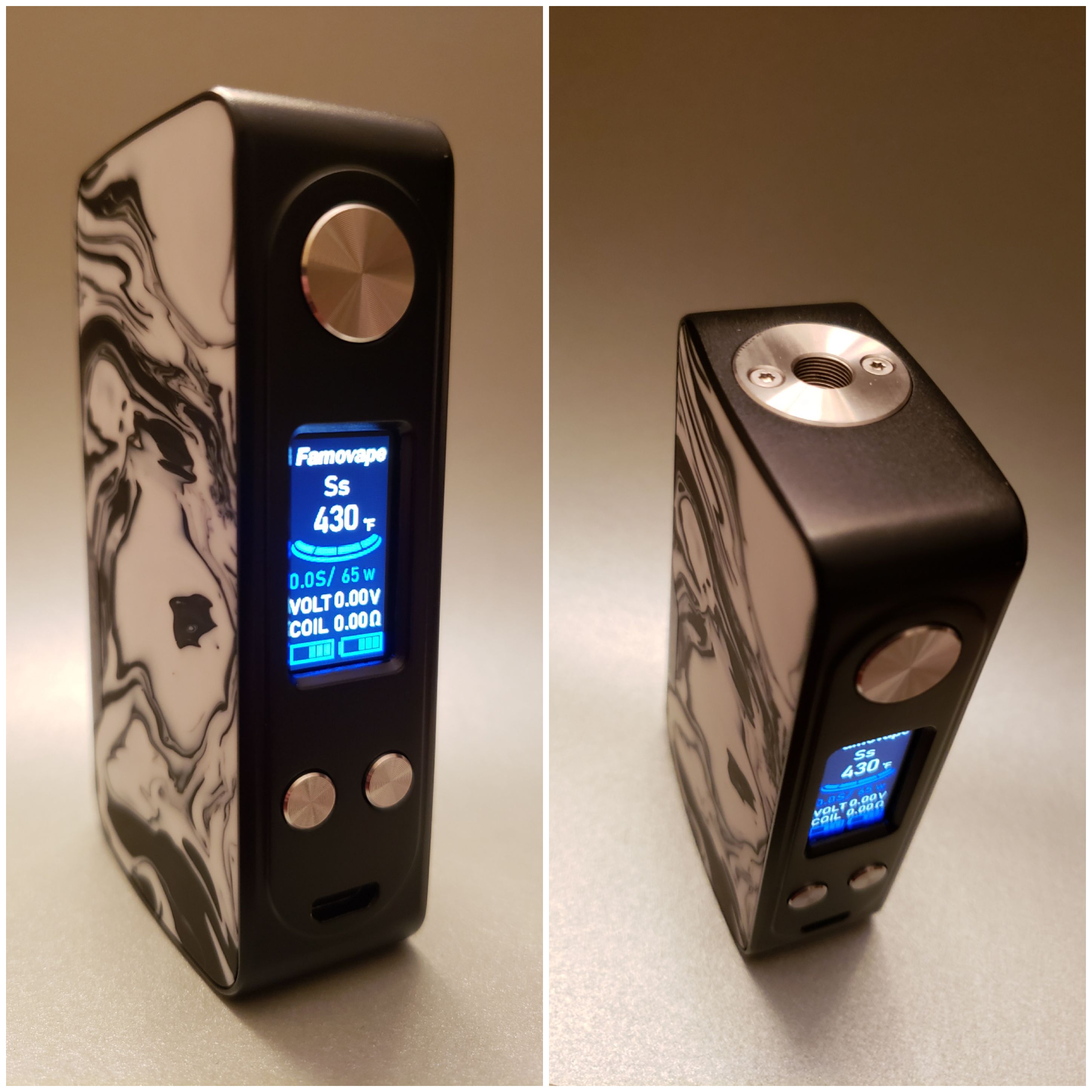 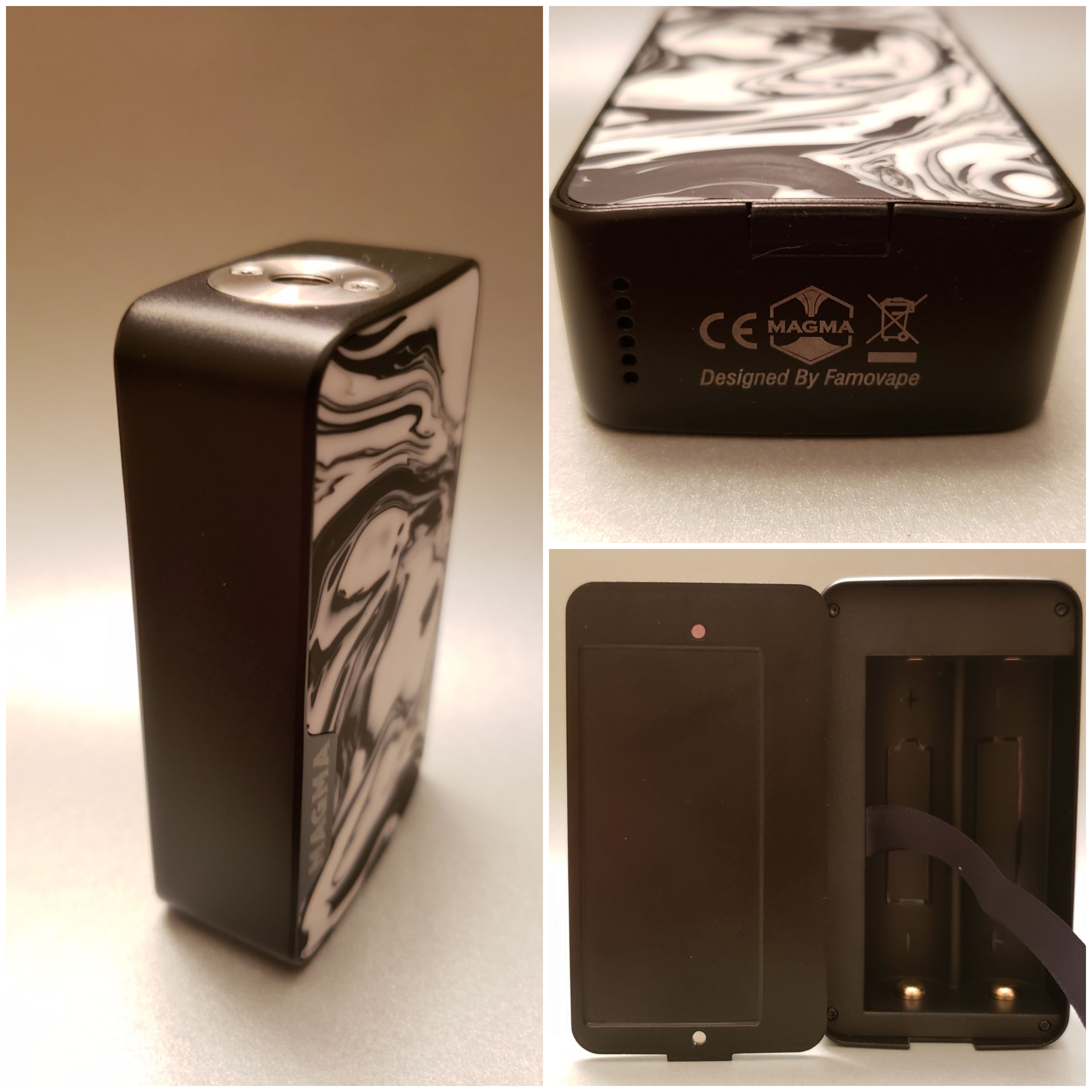 So how does it perform?

In power mode, it hits quick, no complaints there. There are no preheat modes or power curves, if any of that is a must-have for you then you won’t be happy. I do use preheat on a lot of my mods but found that it hits fast enough that I did not mind in normal use. Took it all the way up to 200 watts with a triple coil build in my Titan tank and felt the same as my DNA250C mod, not bad. One thing that is annoying though is when you attach a new tank it asks if it is a new or old coil. Select new and it defaults to 20 watts, select old and it keeps the wattage you had set before. That does not happen in TC mode, those settings stay the same. The watts adjust in 1-watt increments and goes fairly quick, it took 11 seconds to go from 5 watts to 200 watts.

My first TC test with matching RDA’s using the same single coil SS316L build was positive. It did hit on the cool side, had to adjust my temp up 20F to match my SXmini G Class. Even at the higher temp it still offered great dry hit protection which was smooth. Adjusting the TCR from the preset 0092 I found it came a lot closer between 0100 and 0110 depending on the build. Switching to a dual coil build in an RTA I found that it was a close match to my G Class at the same temp, didn’t have to adjust the temp up 20F to get the same vape and kept my TCR at 0092…Took it along with me to meet up with friends on a hot sunny day and that is when I ran into trouble with TC. I had to switch it out of TC and into watts to get a good vape, it did not compensate for the 100 degree heat outside.

For power mode users I think you will be satisfied unless you need to have some preheat or power curve settings. For TC users, if you’re like me and want consistency, then this might not be for you. It is definitely not a bad TC mod but on a hot day you may run into problems and I assume it might be the same for a cold day. The variances depending on the build might bother some, I just adjusted my temp or TCR until I got what I wanted but I see myself using this more in power mode going forward. The 80 watt TC limit annoys me just like it does with Voopoo mods, why limit it? I do have some builds that need 95+ watts to get what I am after. It was apparent with some builds that will never go on the Magma for TC, just can’t get the initial ramp-up I want.

I did not measure the battery life but in everyday use never felt like the battery life was bad at all. It never even occurred to me to check the puffs I could get on a full set of batteries as it was never a problem in 3+ weeks of usage. No passthrough charging, if you are driving and need a charge you will not be able to vape while charging.

In normal everyday use I enjoyed using the Famovape Magma, just ran into a problem on these really hot summer days when using TC. The TC can be good and offers great dry hit protection but it is not consistent from build to build. I still might use it from time to time for TC but power mode is preferred overall. In power mode, my only cons are no preheat or power curve options but it still fires fast and felt accurate. The default to 20 watts when installing a new tank is ANNOYING, that kept bugging me.

I can definitely see the Magma as a great replacement for those with an original Voopoo Drag. It is definitely more comfortable to hold and the performance is a match or possibly better. I gave away my Drag mod so could not do a direct comparison, the funny thing is my friend I gave the Drag to wound up giving it away himself.

I am mixed on if I would recommend the Famovape Magma. On one hand, if someone just wants a power mode mod that hits quick and delivers without all the extra fuss of a preheat mode or power curves then sure, the Magma fits the bill. If someone likes to have options and consistent TC then the Magma will not be what I recommend, mods that offer those options generally come at a higher price though.

I can see myself continuing to use the Famovape Magma after this review, the Shadow version at least. I think it looks cool and the performance in power mode will keep me happy. I was looking to buy the Blue version my friend had prior to being asked to review it so that is saying something.

You can find more info and even purchase it directly from Famovapes website: https://www.famovape.com/products/magma-box?variant=16418479112235

Hang on, did I just dream what happened the last couple years? This all looks so 2016

Good point, mods have been stagnant for a while, think the DNA250C chip is the biggest move forward for box mods but the rest have been more of the same.

Thanks @SessionDrummer Definitely not reinventing the wheel here but solid.

My pleasure @mjag. I probably should NOT admit this but I’ve been slacking on posting on the Vape Mail 2019 thread, and I actually have one of these, hehe, just haven’t had time to try it out yet, but now I feel like I already have. No better sign, of a great review than that, IMO.

OH, and I still love the tear downs. I won’t tell Pugs.

Cool, let me know what you think. I have moved on to my next mod for review, the Wismec Reuleaux Tinker 2. So far using the same tank I am missing the Magma in TC.

Paging @Steampugs, I have some gore for you brother

You’re a sadistic SOB Mjag, I love it

I have a few of these things but I’ve had a few issues with battery connection so I never bothered reviewing it, if I put it down too firmly the batteries would cut out, became too much if a pain in the ass, turns out I got a box of pre production models

glad it worked out for you tho man, I kinda liked it up until the point of wanting to kill it…

Wow, that is troubling they would send that to you. So just putting the mod down too hard and the mod would stop working?

Thanks for adding that info but sucks you had to waste your time with them.

Ah man you have no idea the runaround they gave me, in the end I just pulled the plug

That sucks, if you want I can can take them apart but this time use a hammer

Or maybe like…a car perhaps, or a very tall building…I’m not opposed to the use of explosives either…just for future reference you understand…

Excellent customer service, they saw my friends post in a forum on the faulty 510 from the first run. They corrected it in there next run and sent him a replacement

When I saw that, I about fell over.

Then @Steampugs comments seemed more like what I would expect…

Ah man you have no idea the runaround they gave me, in the end I just pulled the plug

@mjag Thanks for the review bro. Nicely done as always.

Yeah, it seems to be all over the place. I also saw some reviews that saying yes to the new coil gives a recommended wattage instead of the 20 watts I always get. Seems like a crap shoot to what you get but I can only review what’s in front of me.

Thanks bro, appreciate it