Feeling sorry for the people who don't diy

I live in a smallish city in Ohio. It has three vape shapes that sell e juice . I’ve been to them when I have an emergency like I’m waiting my stuff to steep or whatever. It’s always a disappointment. I figured this must be because they have a kind of captive audience. There is a good shop located in Dayton that is top notch but they are very expensive. I recently took a trip to Houston in an emergency . (Mom in the hospital…she’s fine now). I figured I could just grab some juice there. Huge mistake .I went to two shops near by both with sparse selections of mediocre …no a more harsh word is needed…crappy juice. I figured it’s just those 2 …wrong again after visiting 8 shops I found that only garbage is being sold to my fellow houstonians. I feel terrible for them. I then realized it’s maybe not them but me being spoiled on my own tasty stuff. At one shop the guy offered to buy what little juice I had with me . Heeeeelll no I said . Anyway I’ve come to realize that a vapor today is faced with only a few options one buy from the Internet or make it yourself . So for anyone feeling frustrated just do it yourself with simple stuff like a strawberry candy (3% sb of just about any strawberry and 3% sweet tart 70/ 30) it can get you through till you get to make more complex stuff like a bust a nut or cronut or hell any number of delectable things found here . So all my fellow diy.ers hold up your vape with pride …and cheers to you my freinds …we have it made !

I noticed the same thing after I began to use my own juice. The commercial stuff is bland by comparison. I figured it is because they have to appeal to a broader spectrum of people than I do so they have to keep it mellow.

me being spoiled on my own tasty stuff.

Not that there is anything wrong with DIY synthetic concentrate vapes (used them myself for a couple of years)… but, there are some who have taken this DIY thing to the next level of being a self-sufficient DIY mixer. Producing your own naturally extracted concentrates is that next level. Since the Fall of 2016, I’ve been producing and vaping 100% NET mixes (exclusively tobacco). My bank account, once again, has benefited greatly; not since I stopped drinking alcohol, have the amount of funds in the bank been so plentiful, as when I started producing my own DIY concentrates.

Around $5 will yield 150ml of DIY NET concentrate. In turn, that 150ml of concentrate will make around 1000ml of finished eliquid. 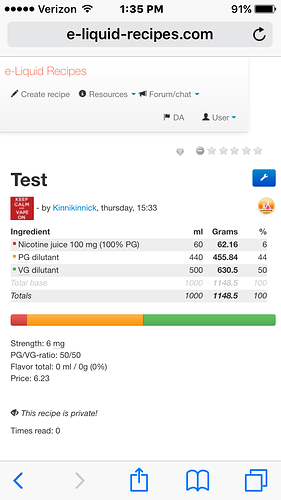 That’s the direction I intend to go after I get a handle on flavor percentage manipulation. Heck, the search for an excellent English Pipe juice is the reason I got into vaping in the first place. That, and I didn’t like the carcinogens and ash and pipe cleaning associated with smoking my pipe.

I still miss my pipe sometimes. Actually I miss the tobacco shops . Don’t get me wrong I love vaping but it was the total experience when I went there spent two to three hrs just going through their inventory and finally choosing some thing amazing to smoke. Then finally getting home and pulling out that wonderful tobacco .the aroma surrounding you .

I still miss my pipe sometimes

Yeah, me too. It’s the aroma that does it for me and I could always pick out the tobacco I knew I wanted just by smell. Someday I’ll recreate the experience with my own juice and an e-pipe.

As for e-liquid flavors that give the flavor inw gold for pipe with some
Obaoba to make a royal or inw cherry for pipe is also a good call for a
mimic of the tastes I enjoyed ,add a bit of shesha vanilla to it and the
angels sing.

Ipassed on some websites recently. I think some people are under the impression that you have to dilute your own nicotine and can’t buy un flavored base ready to go. Minds change quickly when they see the upcharge going on at some shops.