So, if we’re not supposed to leave our little bombs unattended (during charging) what are you guys doing to stay safe? I read one story about a guys mod bursting into flames while not charging. Is there something homemade that makes sense other than a metal bowl full of sand

Who is selling something with a little more decor appeal. I can see the liability from a manufacturers perspective …like selling a fire prevention device that results in a fire. Or is it so rare that I have a better chance of getting struck by lightning while cashing in my winning Powerball ticket?

Seems like an open niche for product development. What to do for all you peeps with multiple mods? …please advise.

I generally charge while I’m at work. Sometimes slightly unattended.

When at home I turn off the power on my mod. If I had a bunch of mods. Which I don’t, but if I did I would follow the same practice or take out the batteries from those that are not normally in use.

I also inspect my batteries for damage.

I also do some of those wacky things like build my own mods with poor wiring skills.

I charge mods/batteries whenever but mostly while I am sleeping , same as my cell phone.I have never seen a mod catch on fire while charging but I have seen an iphone catch on fire when it was being charged.
Some RC guys/gals use a charge blanket when charging lipo’s , such as this.

PERFECT FOR SAFELY Transporting, Storing, and Charging Lipo Batteries. A MUST HAVE for Safety! - Helps to contain flames in the event of a fire. Easy to Open/Close & Very Secure Velcro Closure. Big Enough to Fit Multiple Batteries - Pictured...

Batteries catching fire while charging and the like mostly has to do with either old/abused cells or a bad/defunct charger, as far as I know - remember I’m no specialist or engineer. A quality charger should shut off completely once the cell is fully charged, so you wouldn’t have to worry about overcharging. That said, I never charge my batteries over night or leave them on the charger for extended periods of time after being fully charged. I have enough batteries and mods to make up for the inconvenience.

They tell you that because their lawyers tell them they have to say it. It lessens their liability if you do something to a battery or a charger it wasn’t intended for… or sub ohm without knowing what you are doing

I charge overnight, but not right next to my head and not near a window.

I have smoke and carbon monoxide detectors near where I charge.

Yes. First use only reputable authentic batteries. #1 choice is a Samsung 25R , then LG, then Panasonic.Sony is fine, but they don’t make as many as before , they focus more on Lipo packs now. No other batteries [or brands] are reputable, they are re-branded.

Second, use a good digital charger, like a Nitecore Intellicharger i2 or i4 or a Nitecore D2 or D4

Treat your batteries with care and respect, keep them in battery boxes when not in use or being charged, and inspect the wrapper on them every time you have them in your hand. Discard any battery if the wrapper is damaged.

The best source for batteries that you can trust 100% is Illumn. Samsung 25R is usually $5/ea [backordered at the present] and they have the Nitecore i4 charger for $14.50
http://www.illumn.com/batteries-chargers-and-powerpax-carriers.html/?___store=default

Amazon has some at a great price, and they claim to be authentic.

I have seen where some people put there chargers inside of one of these fireproof bags. $4.34 US 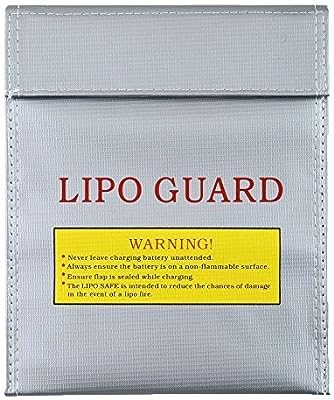 I have also [seen this] but I am skeptical about trapping the heat inside while charging.

I have just spent hours tonight watching the latest FDA Deeming Regulations videos …and while I really do want to know if there’s some cool way to be safer, I think my post probably does more harm than good.

One of the repeated points was how we need to sway Public opinion in our favor. Trying to fight the FDA and Federal Government is pointless. It’s all the people at home that don’t know crap about Vaping. All they hear about is exploding batteries etc, and kids vaping in Junior Highs …“vaping is bad!” “sounds so dangerous…!

Them Vapers are obviously a bunch of reckless youngsters” …but nothing is farther from the truth.

In my curiosity I think I may be furthering the disinformation people latch onto as fact by simply raising the topic and trying some humor. In reality this is one of the most cautious groups of people EVER. I mean reckless folks can’t mix successful recipes based on milligrams.

For any Googlers out there reading this post as a search result on “exploding batteries”, I implore you to take a moment to look to think and also listen. In this post none of the responses were about any eCig batteries exploding, but there was one reference to an iPhone catching fire while charging. It’s the wireless battery-operated world we live in. Life is Risk.

What would happen if the Corporate News channels started talking about how dangerous iPhones were and that “there were kids with iPhones and one of them got burn back in 2014 …we need to ban these things! They’re burning our Children”.

In defense of my post… I think it’s good to want to be safer, but it’s the worst crime against one’s self and Society to trade Freedom for it. Million Vaper March …it could happen. And for the record, all knowledge of mine re: exploding batteries came from the same bad-place-for-information all the other people are getting it from THE INTERNET. The Kids the KIDS they can’t even write cursive because the Internet is in all Arial font!

@BoDarc - I would just point out that any consumer product can be used irresponsibly. Mix bleach and ammonia, and the fumes will send you to the hospital, yet those products are still available for purchase as household cleaners, because people are assumed to have enough common sense not to mix them together.

[DISCLAIMER] NEVER blow dry your hair in the shower

@BoDarc One time I bought a bag of peanuts at the grocery store, and on the product ingredient and nutrition label, there was the following statement:

I am not kidding about this, either.

I LOLed. One of the FDA Deeming Regs videos I watched they said “One on one we are pretty smart, but People are dumb…”

@BoDarc So true! Out of curiosity, I just checked my jar of peanut butter, and yep - it has the same “contains peanuts” warning.

Might as well necro-bump this thread as start a new, even though I’m being asked “Are you sure you want to continue this old conversation?” If I started my own thread, the system would only sternly direct me to this one wouldn’t it? ( I know all it’s mean tricks now., and accept that I will always be in the wrong

Anyway, the point is, I actually bought one of those lipo safes recently, and now I’m very much wondering how safe is it really?

The main problem, as i see it, is that you can’t see through the thing and have to actually open it up to tell if your battery has finished charging, which is a lot more faff than just glancing . Therefore, if your failsafe fails, you’re more likely to overcharge.

secondly, as i think someone said, the heat can’t dissipate so easily, can it? and I’m pretty sure that the battery I tried charging in there got warmer than usual, even though it hadn;'t quite finished charging (felt concerned enough to switch it off)

On the other hand, I still think it’s a cool thing for storing batteries in, which is the main usage I had in mind , so I don’t feel I’ve wasted my money, just wouldn’t recommend it for charging.