SirRisc here with another juicy review!
On todays menu is a premium liquid made in sunny California, known as Five Pawns Queenside.
I got this bottle gifted to me by the kind folks at ecigarettedirect.co.uk! 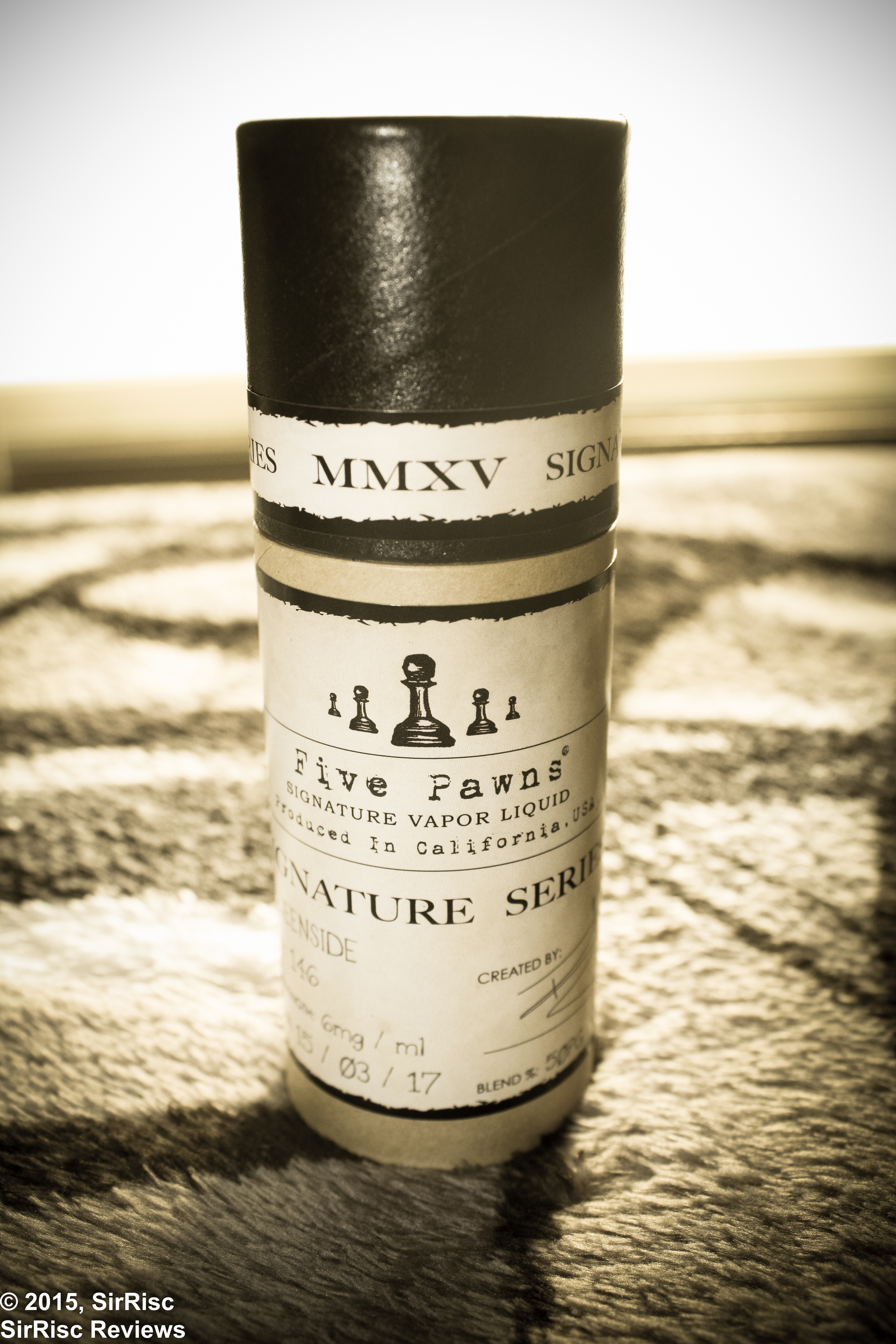 Five Pawns is a brand that is marketed as “premium” and it shows.
Not just by the price tag attached to it, but by the packaging. 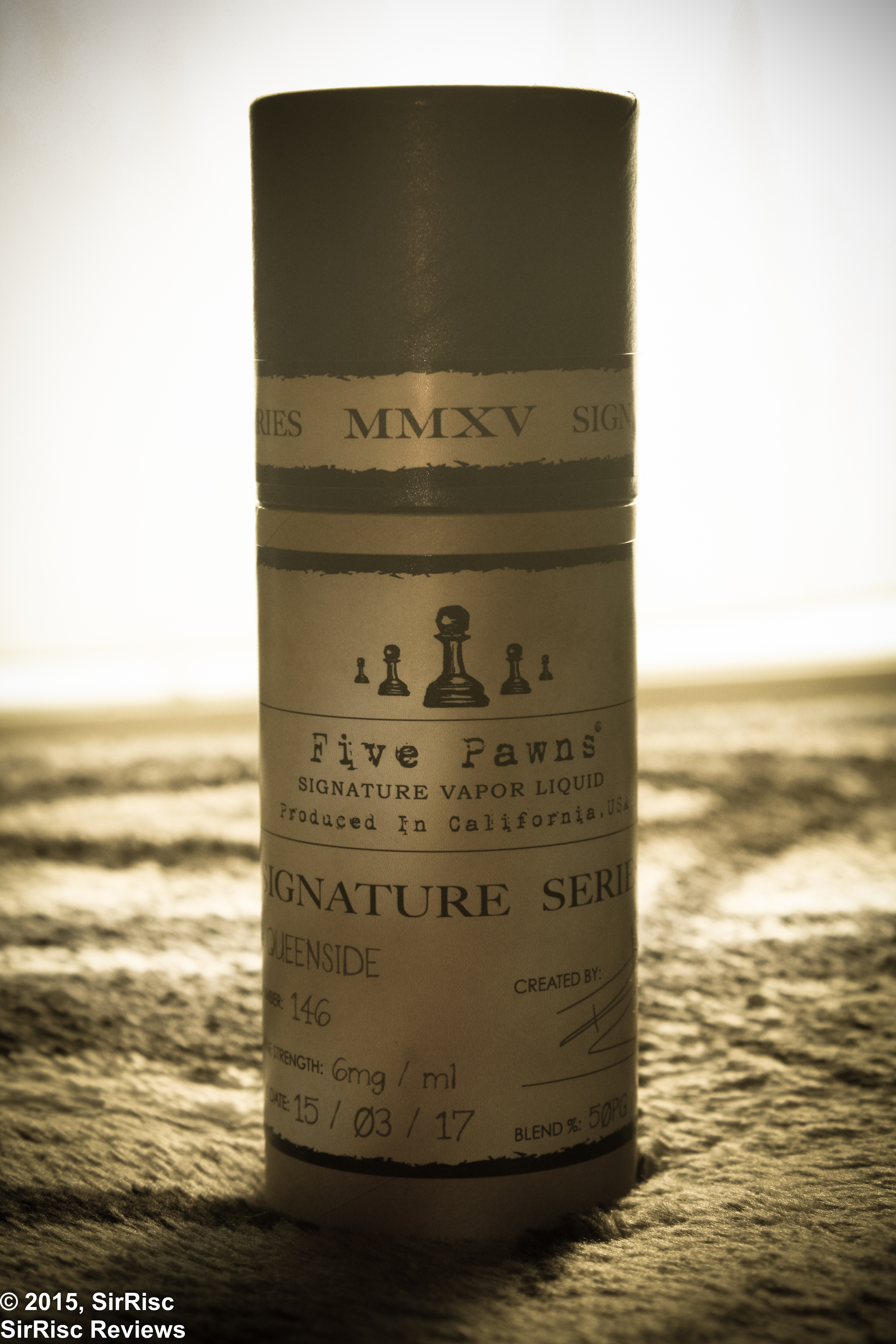 The bottle comes in a round cardboard box that is equally fancy as it is sturdy.
On the box is a plethora of information like the name, which series it is, the lotnumber, and the date by which to vape it. 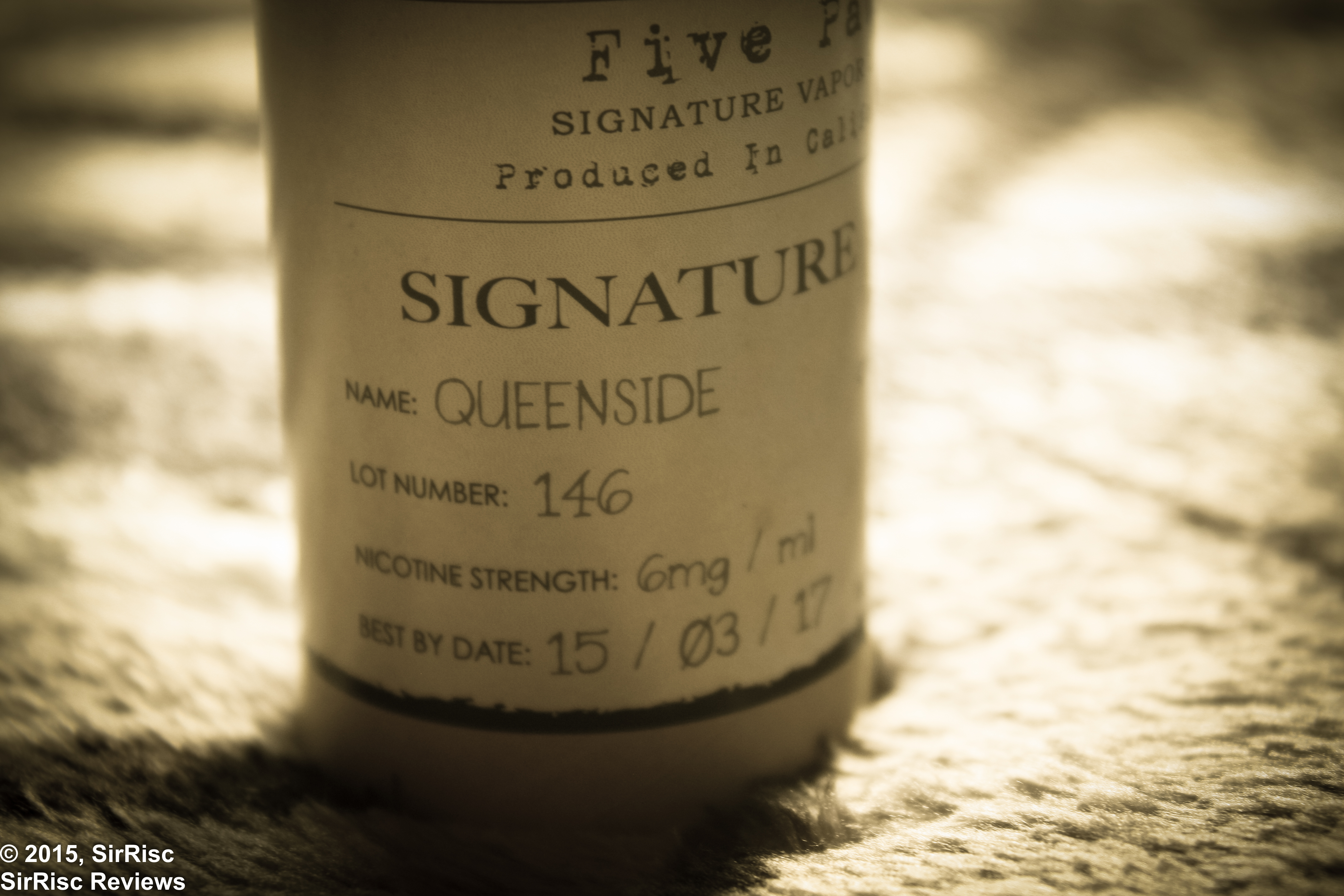 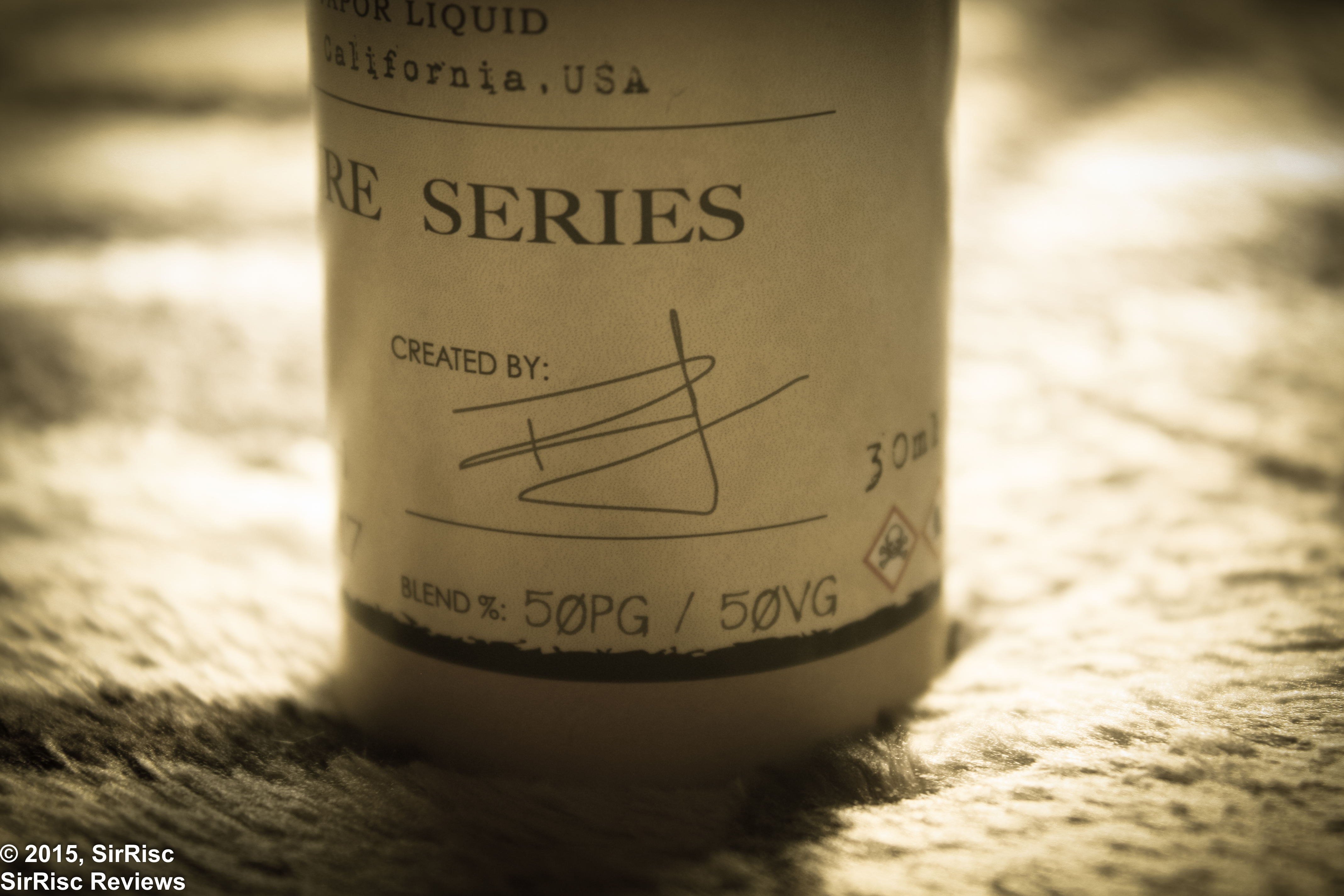 It all looks very professional and very pretty, the branding is done in a good way without leaving much to the imagination.
Inside of the box is a glass bottle containing 30ml of beautifully crafted juice.
The glass bottle has a fine tip dropper to transfer the liquid into your chosen device. 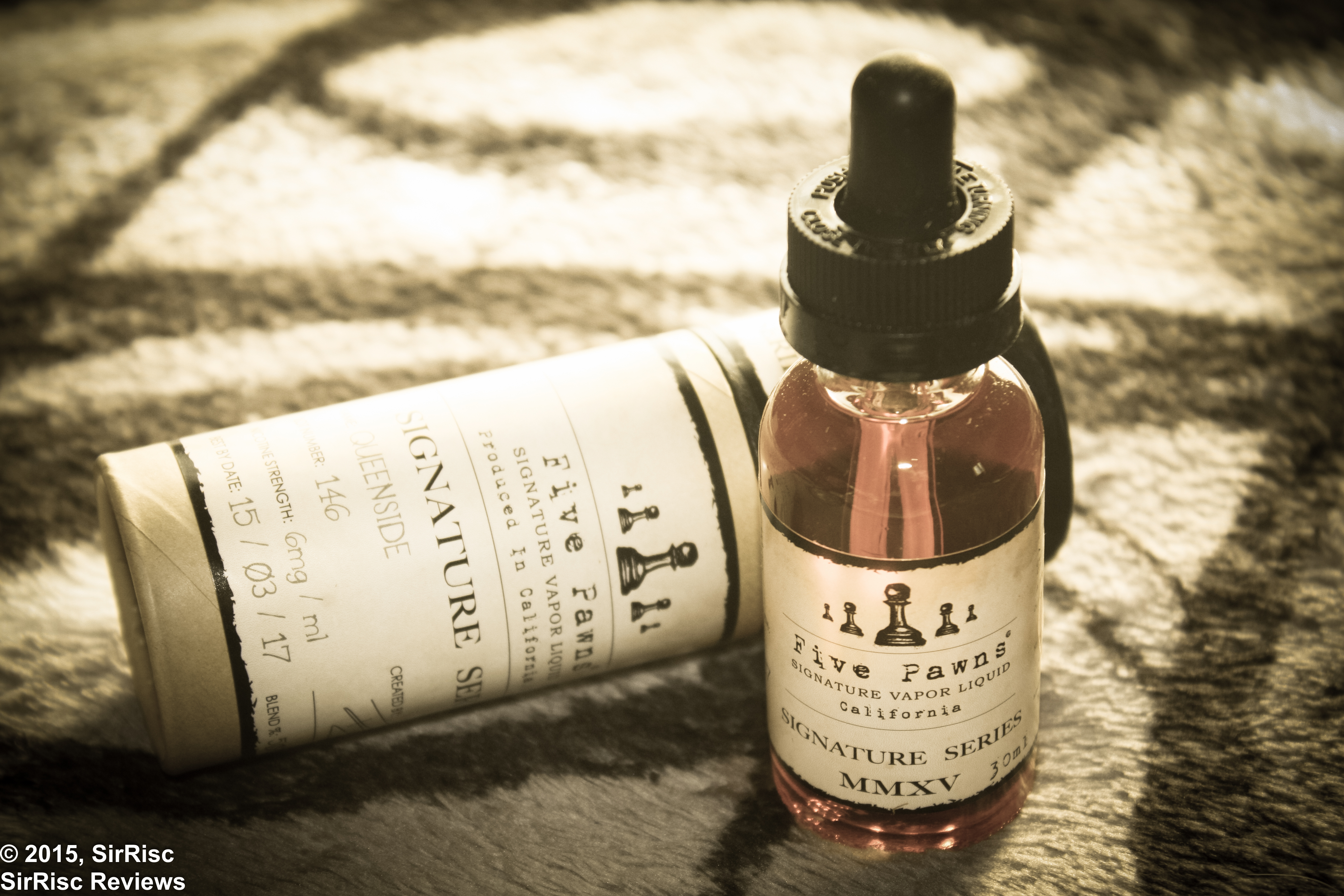 All the liquids were tested in

Five Pawns Signature Series is available in different nicotine strengths (0mg, 3mg, 6mg, 12mg and 18mg and currently 24mg for a limited time only), I got the 6mg for review.
The Signature Series are mixed at a 50VG/50PG ratio, making it a very thin liquid which means it’ll work mostly in clearomisers or RTAs, but not drippers.
It’s simply too thin and too heavy on PG to drip, something I very much dislike because of two reasons.

First reason being PG making a vape very harsh. I’m slightly intolerant to PG because of the throathit. It just feels too much like smoking an actual cigarette. (It does taste a lot better though)

The second reason being my vaping habits. I use RDAs about 80% of the time, and when I’m not using RDAs I tend to switch to RTAs that mimic the same properties. Wide open airflow and low resistance builds.
A high PG liquid will just not work in that kind of setup.

Another thing I don’t quite understand is why the bottle comes with a dropper if it’s not meant to be dripped.
It all feels a bit like they’re trying hard to be premium but are forgetting to look at the actual product and how it’s being used. 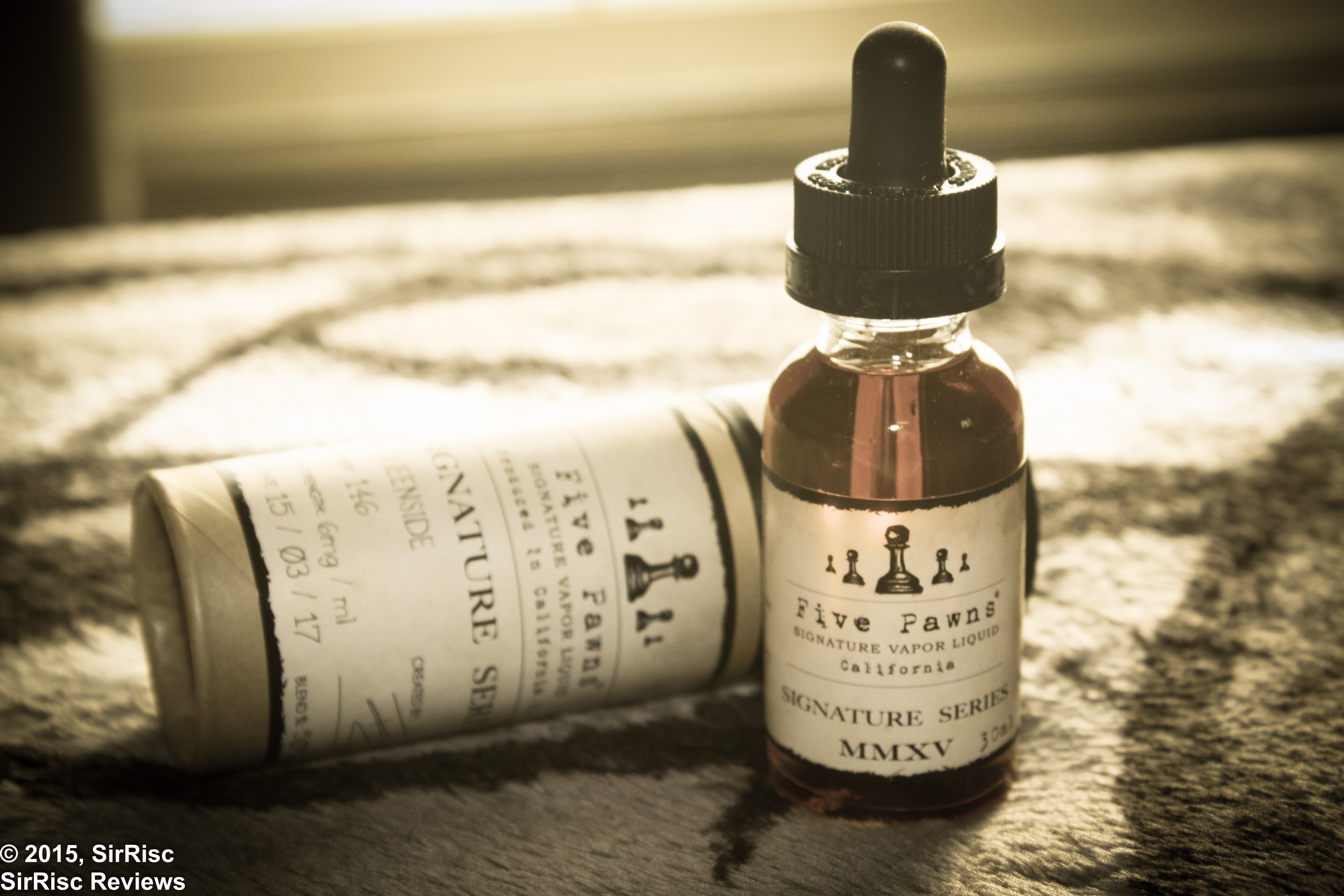 >The distinctive citrus taste of this complex e-liquid is delicately balanced with an exquisite combination of blood orange and creamy French vanilla. This creates a luxurious blend, which leaves an irresistible tartness on the palate.

Scent: A hint of vanilla over a mostly dominating blood orange.

Color: A deep amber with a hint of orange and red.

Taste: On the first session I did with this liquid, I couldn’t quite make out the vanilla or cream. All I got was an overpowering taste of blood orange, though a very natural tasting blood orange.
The second session I did was a couple of days later. I had left the bottle open to breathe for a few hours before I started the session and it seems to have changed the taste completely.
The blood orange is still very prominent with its zesty and sharp taste, but now the layers are rounded off to bring the vanilla cream through.
The vanilla is only an accent, the cream is there to round the zestyness to a smoother and more complex flavor.
In the first session I wasn’t sure if I’d be able to vape this for long, but the second session changed that thought.
The flavor sort of grows on you, it’s definitely not something I’d use as an ADV but it’s not bad at all! 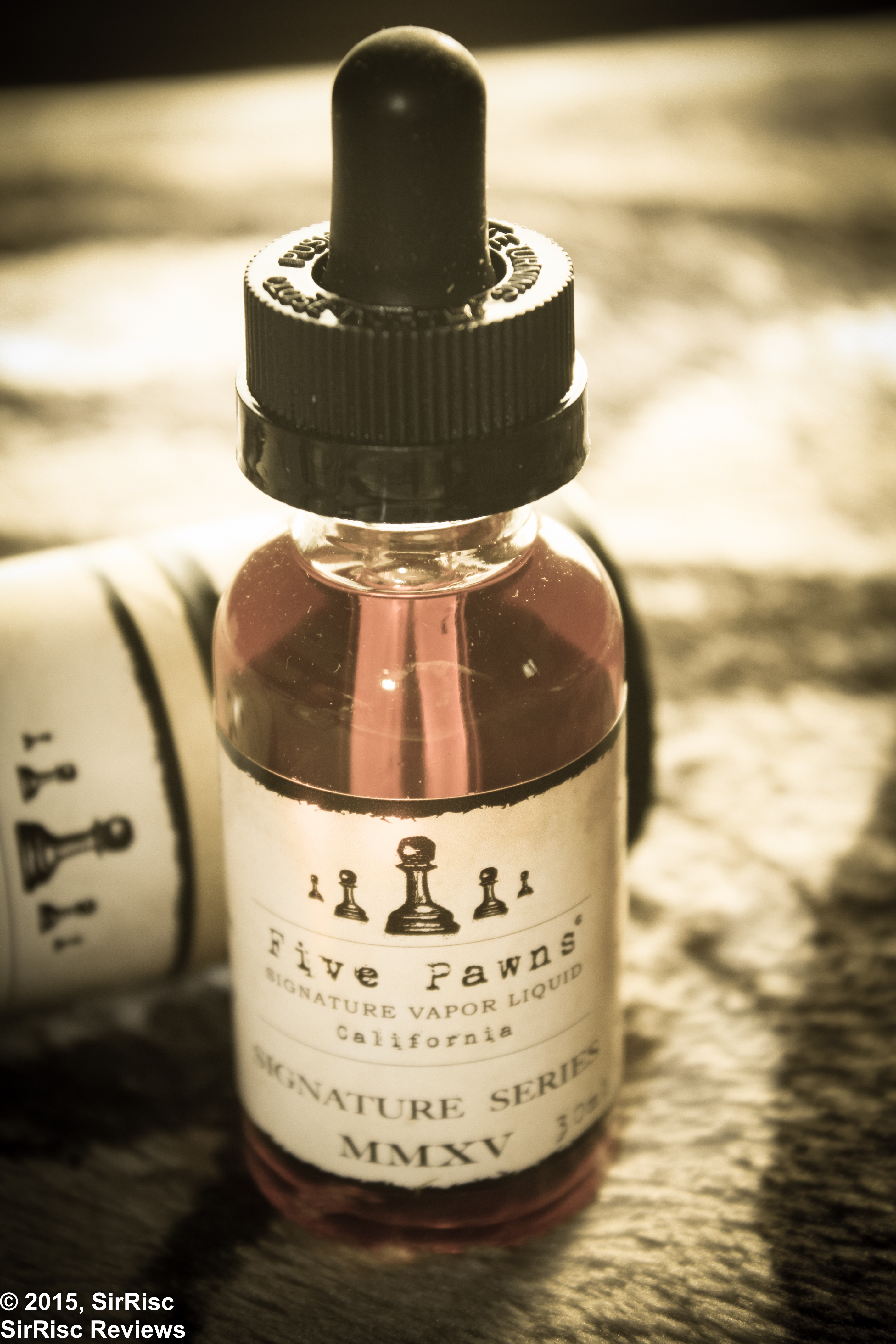 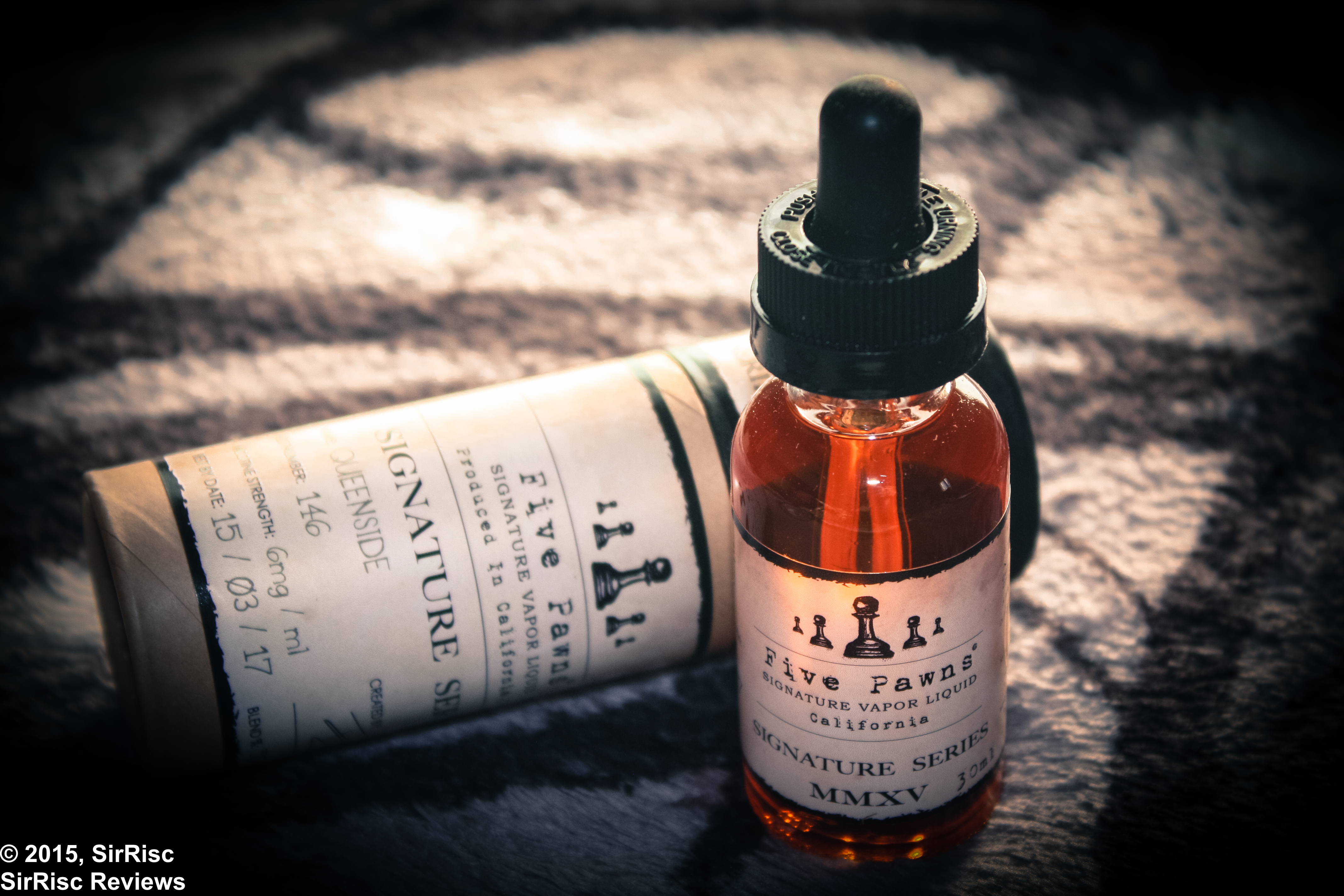 Is Five Pawns worth it? In my opinion, there is just no way to justify the price tag.
The packaging is nice and the juice is good, though too heavy on PG. I would love to see the juice come in a 70VG/30PG ratio instead.

As always, thank you all for reading! If you have questions, feel free to ask!
And a very very big shoutout to Ecigarettedirect.co.uk for the gift! Much love to you guys!
And if you’re a juicemaker, a modmaker or a vendor and would like your stuff reviewed like this, get in touch! I don’t bite… often!

SirRisc disappears in a cloud of blood orange vapor

I never bother with resizing them.
Imgur can handle it, I think… I hope…

Is Five Pawns worth it? In my opinion, there is just no way to justify the price tag.

I completely agree with you! In the realm of giving up your cash for the sweetest pleasures, there will always be manufacturers taking advantage of those with deep pockets or “Ferrari” mindsets. Case in point: Five Pawns price tag of $27.50 to $37.50 for 30ml worth of eliquid.

Not this guy. I’ll keep mixing my own and save my money for other vaping wants and needs. I will now step down from my soap box!

Agreed. Especially us DIY-people that know that 30ml cost under $2

I’m lucky enough to have received this as a gift, but I really wouldn’t buy anything this expensive.
It’s unjustifyable in my opinion because you can bullshit about the flavor being unique and the packaging being pretty all you want, in the end it’s still a 50/50 juice that tastes harsh.
And that’s coming from the guy that has defended Suicide Bunnys Obsidian Edition… and still does.

I can say, when I started diy mixing, the flavor profiles/combinations from vendors such as Five Pawns, Alien Visions and others, were helpful to me in my quest for flavor pairing. After you mix a while and read blogs, watch vlogs and scour the web for recipes, it gets much easier to diy mix a batch of something that can rival the so called “masters” of eliquids.

It feels good to say to yourself, “my mix tastes way better than X’s crap!”.

I’ve found that recipes work best if you use common sense in your flavors.
For example if you want to clone the taste of a dessert you like, you have to look at the ingredients of the actual dessert.
If it has whipped cream, add TFA Whipped Cream. If it has strawberries, add some TFA Strawberry Ripe. And so on.
It’s a matter of finetuning from there, or adding that little extra to make it pop.

That said I still order vendorjuices every now and then, when the budget permits or when I’m curious about a flavorprofile.

Jimk it is so true. I was shopping for my fiancé he exclusively vapes cosmic fog m&h well in the process I thought I’d try out what they offered they were basically pushing the flavor stand my way ( nice ppl don’t get me wrong ) but everything I tasted I compared it to a DIY I’d made or make and it was nice thinking to myself hell nah I ain’t buying this bottle for 12$ when my mix taste much better and can be made for like 2$.

Which I spend too much $ on that m&h wish I had a closer recipe everything I try to mix up never taste like the real deal to him.

I try to mix up never taste like the real deal to him.

While he’s not looking, slip one or two ml of your mix into his mix. After about three or four weeks of this, increasing the ml per addition, he’ll be vaping your juice exclusively! Problem solved. It’ll be our little secret ; )

Amy,… looks like JoeNinja808 has been workin’ hard on cloning that M&H. He’s up to version 5!

To be honest I’d be at version 10 had I kept count. That juice is thorn in my side. I know it says 2 ingredients that ain’t alls that’s in there that’s 4 sho. I taste
a hint of peanut butter some tiny bit of banana what seems like a graham cracker some slight for of cream that I must not carry. Ugh I could go crazy and continue to make little 5 ml batches of testers but that may be a short trip. Hmmm occasionally I search the web for some inspiration and it usually leads me back to yet Another version. So …once again ninja joe808 may get hit up w/ some questions if I get some time.