Fix your shit before you sell it!

No, NO… Simply just NO!
Someone deserve a kick over the knee for trying to sell following: 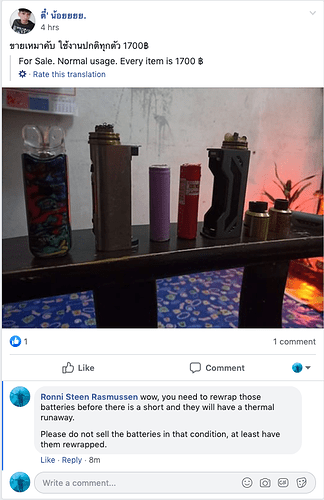 Original photo making it easier to see the condition: 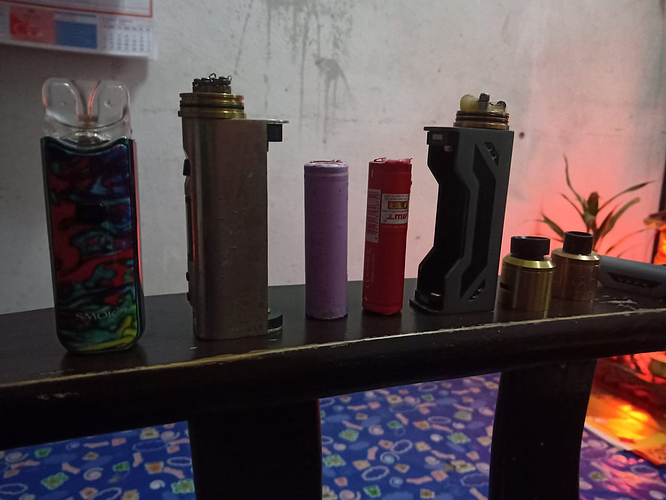 That is the recipe for a disaster, someone getting scared for life and once more giving vaping a bad name.

I think I am not alone but I would never ever use second hand batteries.

For sure not alone. The only 2nd hand batteries i have and will ever consider using is from my wife, which i know how have been treated and how old they are, plus i am the one who have been rewrapping if/when needed.

Fuck batteries! I was hopelessly trying to see what was wrong with the mods

I wasn’t looking at them batteries because I would never use them. Even if a friend needs a battery and I “lend it out”, I’m not using them again.

Holy Jeesh!
Went to my nephews house Monday and his wife told me about her exploding battery episode.
Putting either in the charger or her mod, it blew up to the degree that her spouse heard it in the other room, it filled the house with soot and smoke, and burnt her hand.
I was shocked.
I don’t ever want that to happen to me.
So I have begun to put my batteries that are less than pristine in a box labeled “re-sleeve”,which I am also terrified to do.

There is nothing to fear from re-wrapping a battery…absolutely nothing.

Not to argue, but aren’t I exposing the part of the battery that causes the explosion when I remove the original wrap, which I was told do do rather than simply wrap over the existing wrap because my batteries would subsequently not fit in my device?

Just dont throw the battery from you and let it roll around, which should be avoided no matter if battery have the wrap or not. Just dont let the positive pole get contact with the rest of the battery, which works as being the negative part.

Yes, you would want to remove the existing wrap, else it will easily become too thick, but also, having existing wrap left back, can puncture the new wrap easier.

Rewrapping is easy and nothing to fear, as long as you are not careless when doing so and most importantly, remember to put the insulator where it belong. It takes 30 seconds and can be done with a hairdryer.

Here is a video showing how to re-wrap batteries. I hope it helps sense that was the purpose of the video

I just watched this for the first time since I recorded it. Yikes!! I have come a short way but at least I am better now. Maybe I should do another.

@Chef_Johnny I usually double-wrap my batteries the moment they are bought. Double protection. The only mod this is a problem for is my Lost Vape Triade, all others take the double wrapping without complaint.

I do use the clear wrap because I double-wrap most times and that allows me to see the original writing on the battery. I get them from a roll, cut 7.2cm off each, wrap and heat.

I’m about to do a new video. I didn’t realize how bad it is. LOL

By the way, they sell sticky rings so you don’t have to put superglue on them

And the pink one by the look of it it’s an industrial battery, I know that, because I can get hold of them FOC, you just have to take the soldering strip off, it’s so cheap why even bother to sell it… throw it away!

I think it is an old Samsung 30Q while the red is AWT which many uses around here… i guess they havent heard about Mooch.

Mooch who??? No I didn’t think Mooch about the fact that on a mech it could blow up my lips/face/fingers or burn the house down, or car or trousers (if lucky….)

I don’t know if you are serious or not but if you haven’t heard of Battery Mooch you probably need to.

Since Summer 2015 I have been working to expose exaggerated li-ion battery ratings and give vapers the real scoop on the batteries we use. Testing over 200 d...

Here are the links to all my test reports, ratings tables, blog articles, and answers to frequently asked questions: I want to work for the vaping community full time! If you feel what I do is worth...

Come on Simon @woftam I’m too old not to know about it… (I still use Genesis atomizers and mech, didn’t it sound strange to you that I write things like that??) I’ve studied all the charts thoroughly before even touching the keyboard and write a silly joke, but my joke was pointing out on what happens if you misuse Lithium Ion batteries, watch out gents… ours are NOT normal rechargeable batteries and can be VERY dangerous!! They could explode.