Any idea what tobacco would have these qualities? dark Virginia, almost savory. was around five years ago?

I have no idea what was around 5 years ago, I only vape for a year.

Are you looking for a tobacco flavor/e-liquid that was around five years ago? Or an actual tobacco? The only two I can think of that have been around that long (at least that I tried when I first started) were RY4 and 555.

I love my tobaccos, but I wasn’t vaping 5 years ago either. Could it have been one of the Johnson Creek / Red Oak line? They’ve been around a while. I was a bit hooked on their Domestic & Tennessee Cured before I made the jump to DIY.

A friend is trying to find the tobacco used in Boba’s Bounty since it’s been discontinued. I wasn’t vaping five years ago either so no clue. It could very well be a chinese flavor or not LOL

Oh…not gonna happen. From what I hear, the flavor manufacturer screwed it up and they can’t get back to where they were.

yeah that’s pretty much what she’s concluded too. I figure if that chick can’t find it no one can … but thought it couldn’t hurt to ask LOL

she says she has the base profile all she’s missing is the tobacco … so the hunt I guess? Chinese tobacco flavors that were discontinued hahahha.

The best person to answer this when he gets back from walkabout is @Kinnikinnick That’s his favorite juice and he’s been trying to clone it forever. If anyone can even begin to guess what is in it it’d be him, but I think he’s given up. LoL. Maybe they can work together to come up with something.

I’ll leave these here for him then LOL http://www.essexvapeltd.com/store/original-tobacco-concentrate-5ml 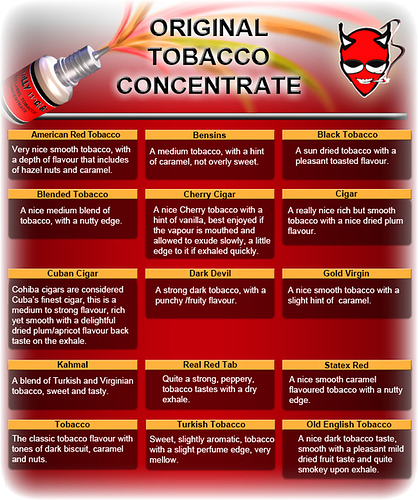 but I think he’s given up

I’m pretty sure that he did

I’ve never had this juice so I wouldn’t even know where to begin.