I just recently started mixing my own juice because NJ doesn’t allow you to buy it pre-made now but the flavors I have been making for instance Creamsicle, fruit loops, Cinnabon etc… the flavors are becoming vague and they aren’t like lip puckering sweet like store bought ones…what am I doing wrong? I’ve tried a drop of sucrulose for every 10mls I have a cotton candy sweetener but I don’t want to over do it and ruin coils either…im using a falcon tank with m2 coils at about 70-80watts…any help would be awesome!

Tank does make a massive difference, even near identical tanks, are you comparing the juices in the same tank as before? Some flavors shine higher or lower but also too much isn’t necessarily more taste.

I always heard sweetner was the difference but I got into diy so fast I can’t offer my experience, just that there are lots of variables, apple flavor isn’t just apple either, it’s personal what’s the best apple but some flavors have a concensus for the best maker, but trying several of one flavor is kinda why’s you may have to do.

I figure some commercial juices are way complex, thoughtful and well researched, no so easy to learn how to blend flavors, our big advantage is building recipes for our devices and style, imo. Some setups for me need much more flavor than another, some will be cloying in a tasty tank.

Hard question, always looking for more of the answers too!

There are two things here. Vague flavor and sweet.

Simply put…some of those store bought have 0.5-1% super sweet by capella (or similar sweetener). I often do 1-2 drops per 15ml to lift/brighten a flavor. Even this causes a bit of buildup on the coils. The only mix I do 4-6 drops per 15ml is orange and cream.

But note that super sweet doesn’t fix a poorly balanced / planned recipe. I would suggest working on the recipe first then if so desired at super sweet.

Another thing I wonder about is what are you using as a sweetener? Some of the random store bought stuff is not the best for vaping and can mess up your mix.

Lastly, type in some of the recipes you are working with…the community can provide some feedback about your mix.

Welcome and glad you joined.

Well one drop per 10ml of sweetner isnt going to get you very close to store bought liquids , especially ifnyiur using say FW Sweetener…I think 1 drop per 10ml is approx 0.2 to 0.3 pct where Commercial Liquids are 1 pct and higher and more often than not your shoe bought liquid is more like 1 to 2 pct of Super Sweet

what am I doing wrong?

Welcome to ELR @Cleaneg8. Have a few coworkers from NJ and I’m well aware of the issues.

Thanks everyone for the welcomes so I just ordered CAP super sweet to try that one out, I also have this vaper vapes cotton candy sweetener and also 5% EM sweetener from tfa I believe (maybe it’s cap) but here’s a recipe I was doing and let it even steep for 2 weeks and the flavors nor sweetness is bold. I’m also made 60ml of this. 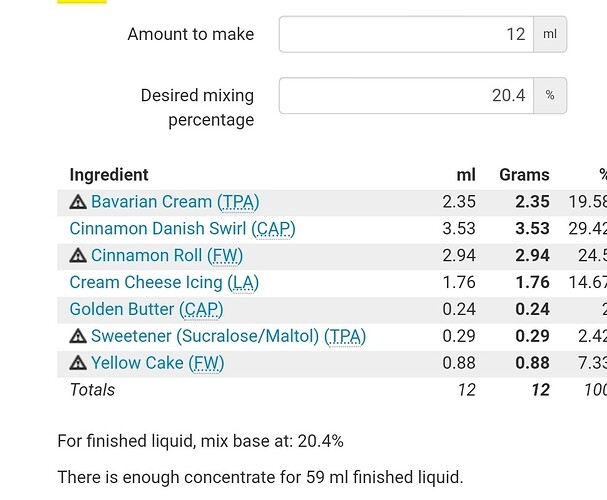 Wlcome to the forum!

I’d steer clear of the EM/Cotton Candy since you’re already getting vague flavor. That stuff isn’t a true sweetener, more of a sweetness enhancer, like bringing the sweet body of a fruit out, not the sugar effect of a cake icing or soda syrup…and will mute your recipes further. It’s difficult to explain, and I don’t understand it fully. Grab your reading hat and use that search function! Btw, in most cases, Cotton Candy is simply EM diluted in PG. So, if you use either, don’t use the other!

I’d stick with the Sucralose sweeteners like Cap Super Sweet and Flavorah (FLV) Sweetness. Or, try some Stevia.

Thanks everyone for the welcomes so I just ordered CAP super sweet to try that one out, I also have this vaper vapes cotton candy sweetener and also 5% EM sweetener from tfa I believe

@Cleaneg8 suc (Super Sweet) and EM (TPA Sweetener) have different uses and effects. It can be very common to use Suc, EM, and saline in mixes.

I’ve tried juices that my buddys company made in numerous tanks and yea some did have bursts of rich fruits ,sweets and sours but I’ve had the same tank now for almost 2 years and the coils always seemed to last.me like 1-2 weeks (extreme vaper) but now it’s like I cant get that really rich taste out of my liquids…for instance like captain crunch (one of my favs) it’s like my buddys juice (fresh from the warehouse being made) opposed to my store bought captain crunch box thats 6 weeks old and stale…not the same tastes lol. I don’t know if I’m putting it into context well enough it’s just one of those "eh…its alright " compared to a “holy shit that’s amazing”

So if you want fruit flavors to be bold you add sucralose If you want candy flavored juices to pop more and give you sugary lips you want super sweet…what instances would you add 5-10% EM or the cotton candy sweetener? Not trying to become a mad chemist overnight lol but I would like to enjoy the shit out of.my home made juice alot more then store bought.

I use Super Sweet for all of my mixes…except tobaccos, which I’ve only just started trying to mix. It works well for fruits AND candies.

So if you want fruit flavors to be bold you add surpluses?

I’d say you add additives. Suc, EM, Saline, even Stevia with ACV can do a LOT to help fruits really pop !!!

Haha I mean Sucralose ( dang autocorrect gets me everytime)

@Ianc13 it’s simple to make, but I found it easier to just pickup the sterile 0.9%, rated for inhalation in individual tubes. I’ll load up a 15-30ml bottle with 2 of them, and use it until it’s empty, and re-fill. Sterile, fresh, etc., just easier for me.

It’s had to explain exactly what it does, but salt is a powerful tool, as used correctly it can enhance sweetness !!! Yes, you read that right. Bizzare right ?

Taste is a complicated business. It used to be thought that there were separate receptor cells on different parts of your tongue for each of the five basic tastes: salt, sweet, sour, bitter and umami (the taste of glutamic acid). But more recent research has shown that individual cells actually respond to several tastes each, at different levels of sensitivity. The upshot of this is that all the tastes interact with each other – sometimes enhancing, sometimes suppressing – depending on the concentrations. So for example, at low concentrations, sour tastes will enhance bitter ones, but at moderate concentrations, they will suppress them. Which is why we put lime in a margarita.

Why does salt enhance flavour?

Taste is a complex sense & our taste buds can respond to several different flavours at once, so what is it about salt that gives other flavours a boost?

Most people only know about the “obvious” use, to make Saltier, which you can, if used at higher rates.

So if you want fruit flavors to be bold you add sucralose If you want candy flavored juices to pop more and give you sugary lips you want super sweet…what instances would you add 5-10% EM or the cotton candy sweetener? Not trying to become a mad chemist overnight lol but I would like to enjoy the shit out of.my home made juice alot more then store bought.

@Cleaneg8 check this to further enhance your understanding …

@Cleaneg8 suc (Super Sweet) and EM (TPA Sweetener) have different uses and effects. It can be very common to use Suc, EM, and saline in mixes.

To answer your question, IMO, you would NEVER want to push EM to 5-10%, as that is def. into “muting” levels.

Suc will sweeten everything, and CAN lead to the sugar lips effect, EM can sweeten or push certain elements, but doesn’t generally lift the entire mixes sweet level like Suc does. You can get some really neat effect by using both, and believe it or not, Saline can affect our perception of most of the sweet/bitter/sour/salty as well.

I’m sure as time passes by I’ll figure out when/ where/ how much tonuse based on flavors I’m making…I appreciate the insight though!