I am just wondering if anyone else has flavorah fried dough it sounded really good I had some recilpes in my head then I got it!!! It smells like stale dark beer it smells horrible . I just mixed up 10ml at 1.5% and it smells strong still and gross. Does anyone have a use for this flavor??? 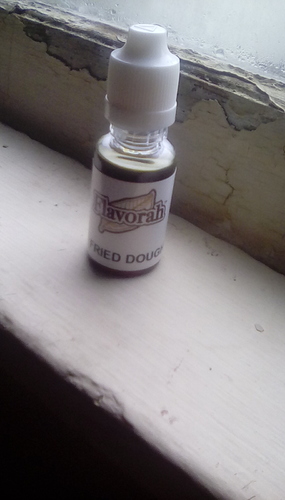 It may act just like joy FA. Some call it the king of beers…because of the yeasty or other like flavor.

When used appropriately joy FA is just fantastic. But as a star it’s not always good.

So my suggestion would be to look at some recipies that use joy FA and swap it for fried dough. That’s what I would do.

I would give it a chance at least. Let it steep for a while and see how it develops, it wouldn’t be the first flavour with a foul smell that turns out to be rather good.

Maybe you could dilute the batch dropping the % and see what it’s like in a couple of days. I have to use Joy FA really low or I get Beer out of it too. I also read somewhere that other ppl are getting the yeasty beer taste from all of FLV’s bready flavors.

I just got Frosting FLV…smell sweet doesn’t exactly scream frosting to me yet.

I’d dilute it to half that %. Flavorah is wicked strong. To use their flavors as an accent, like dough, I’d be thinking 0.1 to 0.2%, perhaps lower by pre-diluting. But yes, other reports like this as mentioned by amy.

I only made it 1.5% the suggested amount is 1-2% so I can’t drop the percent much it smells like old warm dark beer nasty. My wife thinks it smells sweet I don’t know what she is smelling but I can’t smell sweetness at all.

I haven’t even tasted it yet so I am! just bitching a little pre meditated. It’s going to be tough to Vale so!merging that smells that bad the last time I did it oi regretted it. That time it was tfa honey it was so strong and nasty at 2%

Much of the time I find that FLV is even better at half their suggested ratios… I personally would cut in have or there about at 0.60% and then see how it is.

I will give it a shot it all depends on the flavor byn flv I have there vanilla pudding and I use more than the suggested amount so I can taste it. I normally go around 4% or 5% with crunch and cinnamon crunch I also love there cookie dough those are all getting bought imn 4oz bottles for here on out those are so!e great flavors

Ohh so you may need it to be higher if you use those crunch types by FLV in the 4 or 5% I’d want to die if I tried it that high…different needs/ but I have heard good things on the cookie dough glad you like it. I prob will get a few more next time.

I don’t like any of their cereal flavor’s so far have tried them plenty at different ranges. I keep hoping I hit on a flavor combo that I like. It it hasnt happened yet.

That was my first thought too. Joy needs a long time-out so it can calm the f@#! down. If it’s anything like that I’d say give it a two week steep, bare minimum.

That was my first thought too.

I concur Drs. It is likely the competitor to FA’s product which is somewhat popular. Joy is also best at like 0.5% - 0.75%. Joy was also described as “fried dough” and I use it for the white center of Wonderbread in my sandwich vapes. Ever breath through a slice of white bread? …hmmm yeasty dough

No I honestly can’t say I have taken a breath through a fresh piece of bread lol. I have it steeping at 1.5 percent it smells much less fowal after a three day steep I don’t know what I would use it in and what sandwich do you make? I am hoping it’s something peanut butter and jelly or peanut butter bannana not sure what other sandwich vapes are out there lol.