Hi everyone I wanted to see if we all could come up with a list of flavorings that contain acetyl pyrazine! This would help everyone, including myself I’m sure! I know there’s a lot of veterans who can help with this! Thx everyone! Right now I’m thinking FA cookie , possibly FA nut mix and I think Inw biscuit Please correct me if I’m wrong don’t want to give false info!

I looked this up for tpa the other day, these are their flavors that have it: 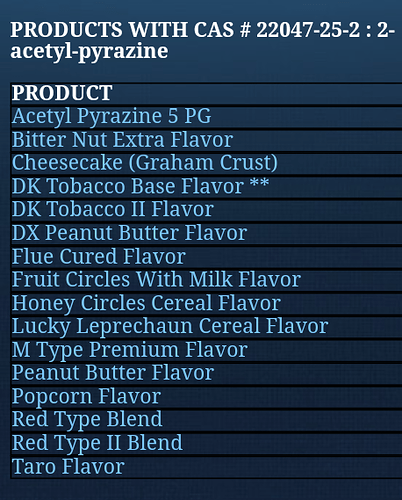 Oh my gosh this is a nice list thank you @VapeyMama looks like I need to edit my original post lol also wish I could change thread title, as I spelled acetyl wrong. Oh well people know what I mean I think! Thx again

wish I could change thread title,

What😮How’d you do that? your Magical! Lol

I’m a magical unicorn disguised as a booze wench!

once you’re a regular level member you earn the ability to edit titles.)

Are you having an adverse reaction to AP?

Damn, you beat me to it! Glad to see I’m not the only one using that section of their site

I wouldn’t be a bit surprised in FA cookie (but in very small amount), almost certainly in FA nut mix, but I think you wrecked the car when you slid into Inawera biscuit. Lol (I don’t sense that at all in there) might just be me though.

Anyways, the only guaranteed listing will be the one available via TFA (As VM posted), until we can convince the other companies to do similar.
Until then, you either have to just chalk it up, or prepare to get intimately familiar with AP at different percentages, to have even a remote chance of identifying it in other flavors.
That’s something that I think most don’t want (or need) to do. But I can see a “true nut lover” or bread fan (Budgie joke anyone?) having the desire to…

Ya I crashed into a parked car on that lol! Ya that sux it should be listed as an additive, that would significantly help when mixing without having to really add much or any AP. I guess I’ll just have to order some more

I think Inawera is using something similar but different in theirs. Whatever it is, I can taste it in the two bakery type flavors I have of theirs…biscuit and cocopilada. Both leave a weird metallic taste for me that I assumed was too much AP, but I don’t get the same thing from any other flavor that has AP or from using AP itself.

Interesting!
I have both of those! =D

One of which (the biscuit) is currently being weighed in a ‘cookie/crust match’.
(Involved are Inawera biscuit, FA cookie, Cap sugar cookie v1, FA Zeppola, and TFA pie crust) I ran out of bottles, or I would have revisited/included a couple more related flavors, but I was anxious to revisit a couple while comparing Zeppola to the bunch!

That’s why when he posted about biscuit, I reached for the Ina sample, tried it, and joked about wrecking the car. As I don’t get that at all.
I’ll definitely have to try and remember to look for that from the cocopilada! As well as dig out the AP again (though I’m fairly familiar with it, it’s still far from “intimately” as I put it before. Lol).

I don’t doubt you for a second (that it’s “similar but different”), and it’s unfortunate (at least it would be for me) that you get a metal taste. Do you get it across the board? Or is it just at a certain percentage and higher?

Thx @JoJo I knew there was something weird in it lol, but it is one of my favorites also!

@Sprkslfly I’m going over old notes and it looks like any time it’s over 1%. Less than that and it seems to be okay.

@GalacticResidue yeah it’s super disappointing because I really enjoy some of the recipes that use it otherwise but that, I call it the Inawera Twang, ruins it. I’ve learned to lower biscuit and cocopilada and sub with other cookies like FA cookie or Sugar Cookie or something like Nonna’s Cake to keep it from being too much of an issue.

Something just hit me…

Do you make your own coils? Or I guess it’s better to ask…What are the coils you use made of (material-wise)?

My thought process being, I could definitely see how kanthal (in particular) might ‘amplify’ any level of a discernable ‘metal trait’ in a flavoring. Might be the same for nickel or titanium, but as I haven’t used those, I can’t say.
What I can say is that when I used kanthal, and switched to stainless steel, my flavor improved quite noticeably.

I’ve been using SS 316L for at least a year. It’s all I use. I tried titanium for awhile and it’s okay, but I keep coming back to SS.

Well, shot that theory in the ass. Lol

It’s a good theory, though. We were talking about the differences earlier so it makes total sense that that could contribute. I wish it was that simple. LoL