Hi guys, I’m wondering if anyone has any suggestions for swapping out certain concentrates in recipes?

I completely understand that if you swap a flavour it won’t be what the original mixer intended, and can be argued its not even the same recipe, but there are certain situations where using the proper ingredient can’t be done.

For example, I am intolerant to TPA Strawberry (Ripe) and Juicy Peach (and probably others I haven’t found yet), and I haven’t found Hangsen and DIYFS concentrate available in the UK.

For instance, TFA Ripe Strawberry is a real, sweet, ripe strawberry with no candy / jam notes. Maybe we could replace it with, for instance, red touch from Flavour Art, that have the same profile.

yes thats exactly what I was getting at.

I think a lot of brands get a bad rap when their flavours “don’t work” but actually, if you think about it they are all different (probably because of copyright etc) so they all offer something. I don’t believe TPA are any worse than FA, they just offer different products that play different roles.

But yeah, I was hoping there are some that are pretty close.

So, for example, is there anything close to LB Vanilla Ice Cream? I haven’t tried it, but TPA VBIC I find peppery and CAP is a bit wishy-washy.

to replace Vanilla ice cream LB I would look into TFA vanilla swirl. For me, it have the same profile, but lack the mouthfeel the LB have, so IMHO it need something else to add the thickness.

I haven’t found Hangsen and DIYFS concentrate available in the UK.

Hangsen stopped selling their products in Europe but this shop still sells some flavours. 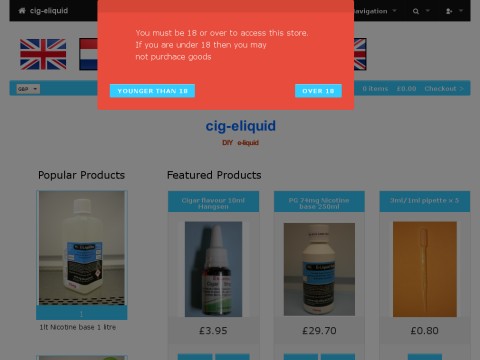 6 pages of flavours for DIY mixing

I’ve had a long look at this website because I was interested in trying some of their concentrates but somehow it really didn’t look appealing at all. So I bit the bullet, paid a little extra shipping and ordered from Nicotine River instead. They also carry other brands like Purilum that I so wanted to try.
I can’t say I regret my purchase and when these concentrates are done, I’ll just be ordering from the US again. It’s a shame companies like Hangsen, Purilum etc don’t sell in Europe anymore, but that doesn’t mean you absolutely cannot get them if you want. Still, after shipping and other duties, it’s cheaper than buying ready made e-liquids.

Thanks guys. @Josephine_van_Rijn I’ve looked at that site before and must admit it looked too dodgy even for some dodgy nic! I suppose I could try it, but I do wonder how legit it is if Hangsen don’t supply Europe anymore. Also, what happens if I like it so much I can’t live without it and they run out? DISASTER!

@anon28032772 I doubt very much I’m going to order from the US, mostly because I can’t be bothered

but also I’m not sure that I’m actually that interested in how much better a 6 flavour juice will be if just 1 is subbed out. Then again, I must be a bit interested because I made a post about it…

if you swap a flavour it won’t be what the original mixer intended,

That is mostly true, but keep in mind it might be because it’s the only flavor the original mixer had available at the time. Sometimes what you substitute will actually be an improvement.

You guys obviously have a point and I completely agree that you often get away with a substitution, most certainly if it’s not the main flavor.
But in some cases, a recipe just isn’t the same with a sub. I’ve tried multiple times to change out RY4 Double with INW, FA, Hangsen etc in my favorite recipe and I just can’t get it to even come close.
So yes, I do recommend that sometimes you go a bit out of your way to get that elusive concentrate because sometimes it’s just worth every cent and more. Then again, sometimes it’s not either

The thing is, you will never know until you try.

And it really doesn’t cost an arm and a leg either. Flavor concentrates in the US are a lot cheaper than in Europe so If you have a reasonable size order, even with shipping and customs, price wise it’s not that much different from just shopping in Europe.