Im looking to make a lime based cheesecake at 80% VG (30ML)
Can someone give me an idea on percentage of flavouring with the lime and Graham crust cheesecake ?

Average mixing percentage according to ELR users info is 4.9%

thanks for the heads up though

With 80% VG you’ll probably be fine depending on what you’re vaping with. Tanks tend to have more muted flavor than drippers. If it winds up being too strong, you could try adding some cotton candy (or EM) if you have some.

You could also mix 30 ml of 20/80 pg/ vg unflavored base and combine it with the batch you already made if the original is too strong.

Ok ive had a taste and its vapable. Not too strong but was expecting more flavour if im honest.

My taste buds are near dead from smoking MFS. Most recipes run around 20% flavor but in my case I use more along the lines of 23-24%.

I’m having a problem with a mix that perhaps you guys can help me with. I’ve been using others recipes. In doing so I’ve learned what I like and don’t like. I’ve created a recipe that I know will taste awesome to me but I’m having problems with the percentages. It’s actually a clone of a manufactured juice with my own little twist. It’s a complicated mix.

clone of a manufactured juice

What is the original juice called and who’s the maker?

@ringling will be the first to tell you, juice vendors only use about 3 or 4 flavors or additives in a mix. It would cut into their profit too much if otherwise. I’m starting to lean towards a four or five count mix myself; I think I’m fooling myself in the thought that a recipe with a 12 count of flavors is better than a recipe with only a 3 count. IMO, perhaps the tastebuds can only register 3 or 4 flavors accurately; after that, I’m only muddying the waters, so to speak.

I used to own a bakery and although different numerous flavors create it’s own unique flavor. That’s usually the one that you can’t quite put your finger on. IMO if you can pull it off economically, you will jump to the forefront. Look at it from a flavor pairing perspective. Two pair of flavors often times create 2 unique flavors. At other times 3 mated flavors combined with a pair of flavors will create 2 flavors and often that one I can’t put my finger on or etc., etc., etc.

I’m having trouble understanding the 3 or 4 flavor juice. Unless the goal is to reduce the flavor percentage.

Take a gander at the the thread below. What I’m trying to say is, it is possible to have an outstanding mix with only 3 flavors. I have no doubt your mix will kick butt and many of my 8 to 12 flavor mixes are quite vapeable, but I’m thinking a vape mix doesn’t really need that many flavors to rock.

But, if you’re into complicated recipes:

Perhaps some others can weigh in here to help with the %s on your mix; I do not have many of the flavors in your desired mix.

Thanks anyway Jim. If I’m not mistaken your into tobacco flavors correct? If so what would be your very favorite tobacco styled recipe?

Honestly, for now I am absolutely in love with my Luxury Navy Flake III.

Very simple recipe. I usually do a 5 or 6 count flavor mix; this one is three. I have been so taken with the Inawera “for Pipe” line of flavors; very satisfying tobacco flavors. They remind me of the hand rolled tobaccos I smoked for SO many years. Nice to have the tobacco you want and not be killed by it!!!

juice vendors only use about 3 or 4 flavors or additives in a mix.

If we are talking about Vape Shops, the majority don’t blend even as much as myself. Most of what I consider my premium blends I sell have 3-5 flavors (Most 4). Most other vape shops use single flavor mixes (Mostly TFA) or if any true blending 2 flavors max (Often menthol is one). Maybe I’m the oddball but at least I can say that when I sell someone a Premium Juice, it IS a Premium Juice.

I agree with you here. Many recipes I have seen with mega amounts of different flavors usually repeat flavors (3 different Vanillas) (2 strawberrys) (3 creams) (3.339 Custards) Etc, etc. Damn, use just one GOOD one, right.

I know I’m not as experienced as the two of you… but for me it all depends on what you’re shooting for and what you have to work with. I made a Banana Pudding with 3 types of Banana and it’s the best I’ve made. Individually I couldn’t get the flavor I wanted, but combined it came out great. I had been trying for two months to get the right effect and that’s what it took to get it. I like a lot of Desert recipes and I find they are very hard nail with under 6 flavors. Fruit and Tobaccos are easy to keep the count low. Now that I’m getting better flavors it’s not as hard as it was.

This cannot be made with 4 flavors. 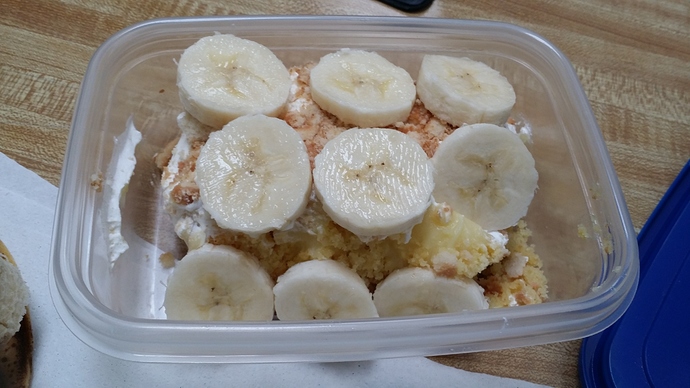 I agree there can be synergistic action with recipes. But ain’t it grand when you can make a kick ass mix with just 3 flavors!

There’s an old Scottish Gaelic proverb that says:
Better is the small fire that warms than the great fire that burns (i.e. less is more).