I am surprised there is not already a thread on this, but I think there should be.

What is the deal with this flavor? I have read in many people’s notes that some get an off taste from it. I kept from ordering it for so long for this very reason. After going through a few unsatisfactory pineapples, I finally pulled the trigger on this flavor.

Wow, it smelled so good out of the bottle, I wanted to drink it. Why were there so many bad reviews on this?

So I finally got around to putting it in a recipe with a little mango and peach as well as some sweetener. I only used it at 1.75% and now the recipe has an undescribable taste to it that is kind of unpleasant. I had been using RF SC Pineapple and the recipe was just fine, but after I threw in FA Pineapple… WTF.

It is not a burnt taste, but it is not a pleasant one either. So I looked around at what others were using it at and for the most part, it seems 1% is a good number.

I am about to make a single flavor mix at 1% to see if the taste is still there, but has anyone else run into this? I know that it is all subjective but am I one of those people who gets a burnt tire taste from this? It smells soooo good, I want it to work out for me.

I can’t help you with FA’s, for that is the one (and only) flavor I didn’t purchase. Have you tried CAP’s Golden? Out of all the pineapples I have, I find this one to be the “best”. I use it with a touch of INW’s and get great results. I keep INW’s pretty low though, around 1-2%, with CAP’s above or below 2%.

I am not a fan of all Capella’s fruits, but I think they did a decent job on their golden pineapple.

As for CAP Pineapple, I too have heard many great things about it but I find it to be harsh. I might have to try it again, my batch may have just happened to be alcohol heavy or something.

Really? Do you keep your %s low? Pineapple is one I have always wanted to vape, but it’s never blown me away. I will use it in a blend but never as a stand alone or a straight pineapple juice. More a part of a tropical type juice. Something about it, regardless of the company, that I just don’t seem to care for.
MF’s was one of the worst I have had, but as long as I keep it low on CAP/INW, it’s good.

Yeah, even as low as .5% it was unsettling. I loved the way it tasted, reminded me of gummy bears.

Thanks for the heads up on the MF, I have had my eye on it.

Also, I find a strawberry-pineapple blend to be good. The sweetness of the SB, cuts that harsh, off, pineapple feel. Mango is another good one to cut it with. I’m shocked I don’t have FA’s to be honest. I had to look in my lab and double check my stash, to make sure, haha. Doesn’t sound like I am missing anything though

Thanks for the heads up on the MF, I have had my eye on it

Yeah, the first 2 weeks is awful. It starts to get “better” after that, but for me, it has a harsh, almost plastic, type feel. I didn’t care for their mango either. The only 2 flavors I feel they missed the mark, drastically

I wish INW had MSDS sheets, I feel it would help me nail down which compound in it was giving me that stomach ache. I wanna buy it again though sometime in the near future, perhaps it was a bad batch.

Yes Pineapple FA isn’t as sweet as the rest of them out there. If anything it is akin to Mango FA kinda boozy and astringent w/ only minimal sweetening effects work well to boost flavors like melon and watermelon. It worked very well in my FA Tiger’s Blood http://tjek.nu/r/2eWn

I’ve never had a bad batch, no. I have seen a lot of people say they have or believe they have, but I would think a lot of people would at the same time then? Not to say it can’t happen because I believe there was a company last year that had something wrong but that might of been a quantity issue, not quality…can’t remember haha.

Sometimes a person just has a reaction to certain flavors. Like I have issues with FLV’s cereals. The taste like mushrooms to me

I do like the addition of FA to take cap from candy like to more of a natural flavor. But that’s me…I like natural tasting fruit vapes

Well, my 1% batch tasted a bit better, so maybe the 1.75% was just a bit high for my palate. Will probably also taste better after it steeps (the 1% batch), so I will have to see.

If you want a good sweet pineapple check out flv pineapple. I use it around 0.5-0.75% off the top of my head.

The only thing I really like fa pineapple in is a Miami vice clone. It works really well with fa papaya.

I do have that, I was using it some before. It is almost like a cooked pineapple, pretty distinct in a mix if you are not careful!

I have this flavor untested as of yet as the smell test scared me off lol it smells very earthy pungent almost like tree bark lol what starting % can you suggest? Tasting notes? Your thoughts on papaya flavorings by other brands? Papaya tip: add 0.5% FLV Permisson to boost papaya yummyness…

Flavorah Crunch Cereal tastes like spoiled diarrhea carrots and throw up to me, God help me. I can still taste that funk in my mind, it’s like a traumatic everlasting hellish nightmare. Vivid dreams of me in the shower with a shower cap on brushing my teeth vigorously while curled up in a fetal position chanting, “Think of a happy place, find my happy place.”

Here’s a recipe I couldn’t get enough of. I’m on my phone sorry it would let copy right so I screen shot it. 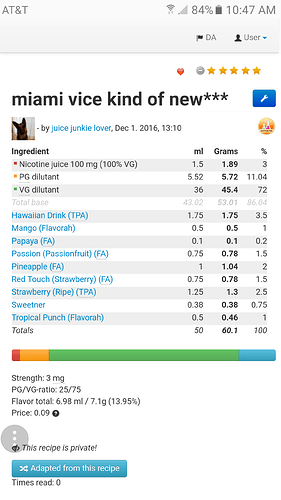 I’d say start at 1 drop per 10ml and see what you think when using FA papaya. To me it’s a really strong flavor and definetly noticable in a juice. You really have to be in the mood for it. It plays well with pineapple, mango, and strawberry. I can see how persimmon flv would work well with it.

I really liked papaya punch flv as a solo but have yet to play with it more. I imagine it would also play nice with papaya fa.

Flavorah Crunch Cereal tastes like spoiled diarrhea carrots and throw up to me,This really made my day for a LOL as I have no known thoughts of what that tastes like,lol,er,wait, there was that time in Daytona Fla. Thanx for the laugh!!!

Yes and I’m glad it made your day. The interpretation of that experience was the best I could do with all the grossness that comes to mind when I recollect on that traumatic day of a distressed vaping session nightmare. The truth is often times funnier than made up jokes and even funnier when it’s not really meant to be…

LOL I have had my eye on a few FLV Cereals, thanks for the heads up XD