Thank you for checking out my review of the FreeMax Gemm 80 watt Starter Kit which was provided directly from FreeMax.

Let me get right to it and mention the Gemm tank is disposable and I know that will ruffle a few feathers, I voiced my concern when Freemax asked me for my opinion prior to its release. Personally, I have never given thought to purchase a disposable tank, figured there is enough waste in the world and I do not want to add to it. That said there are others who will have a different opinion and want to know if it performs, that is what I am here for. The Gemm 80 Watt VW mod included in the kit is rechargeable and based on usage can be used for years. It does have a built-in battery which is not replaceable so eventually, it will need to be disposed of but that would take more than a year or 2. 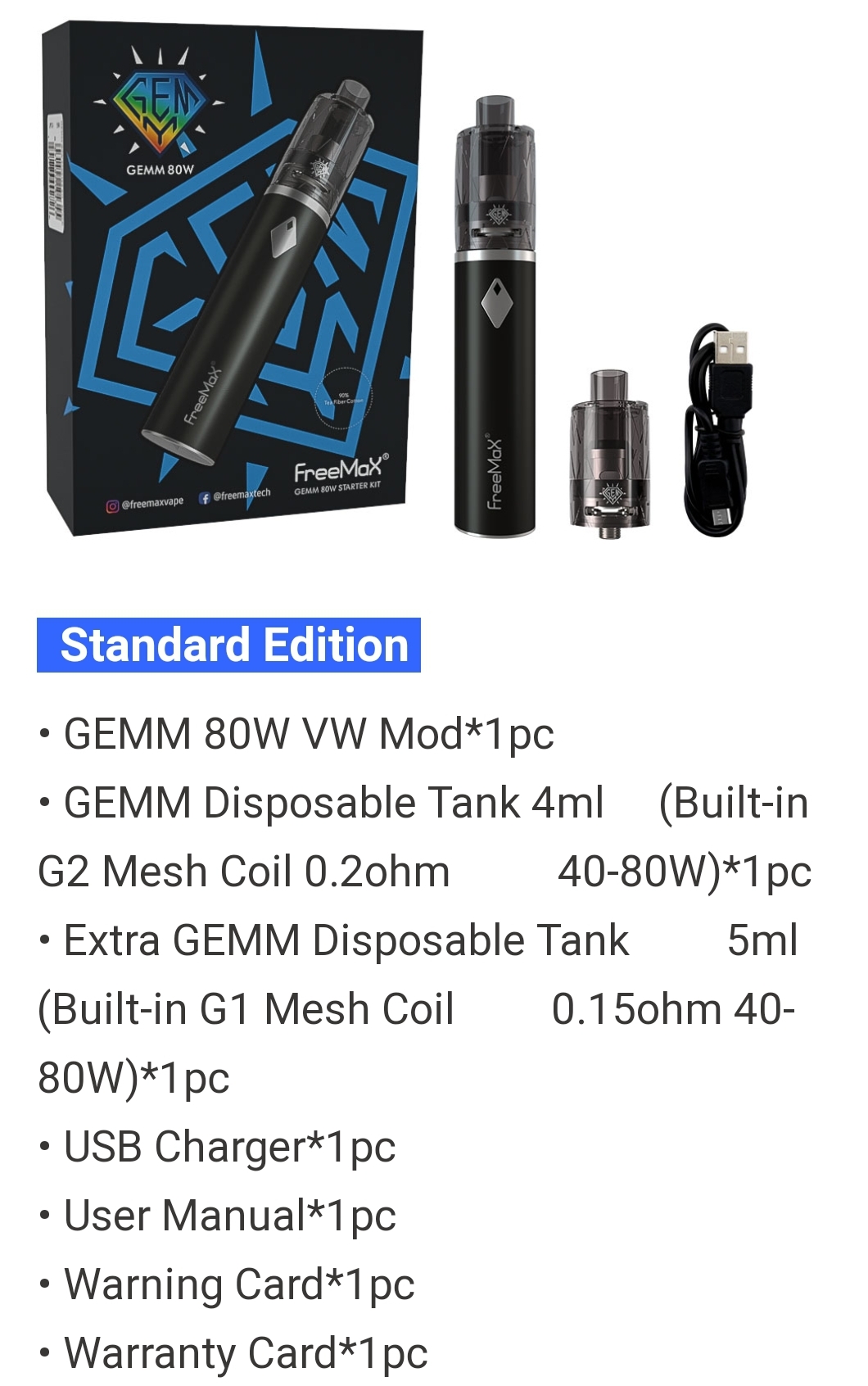 TPD version includes a 2ml version of the Gemm tanks 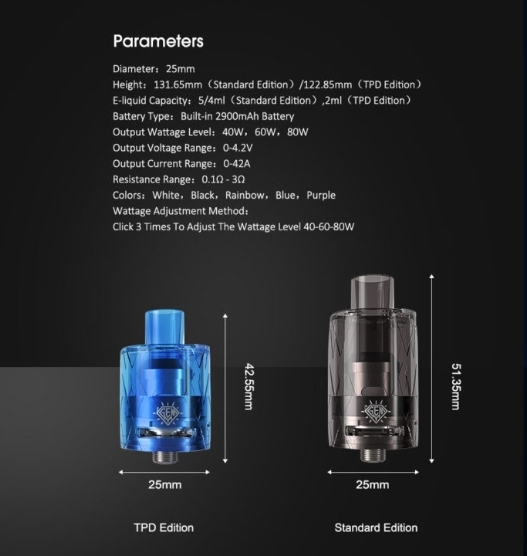 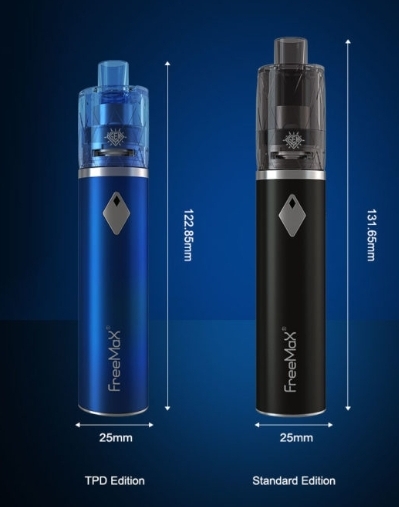 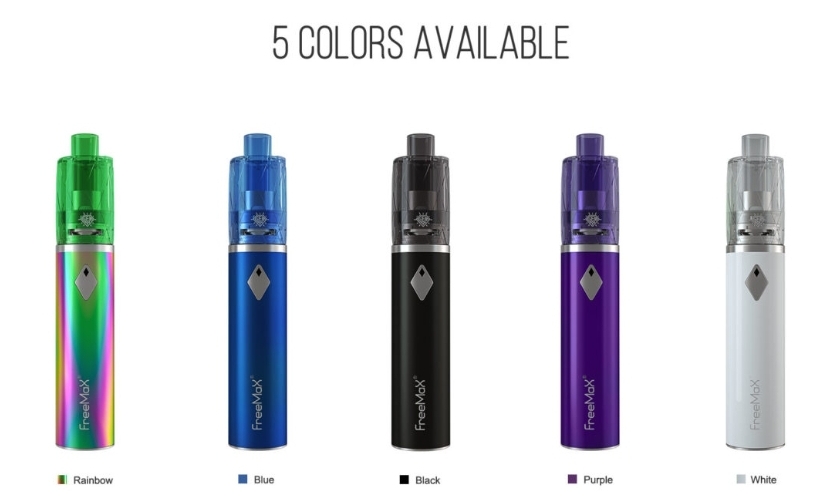 Getting to know the Gemm 80 Watt VW mod

The Gemm 80 watt mod is included in the kit but does not appear to be available separately for purchase. Simple mod, 5 clicks on/off but it adds 3 power levels which are accessed by clicking the fire button 3 times. The power levels are based on the ohms of the tank you attach, just like a mech mod so keep that in mind. 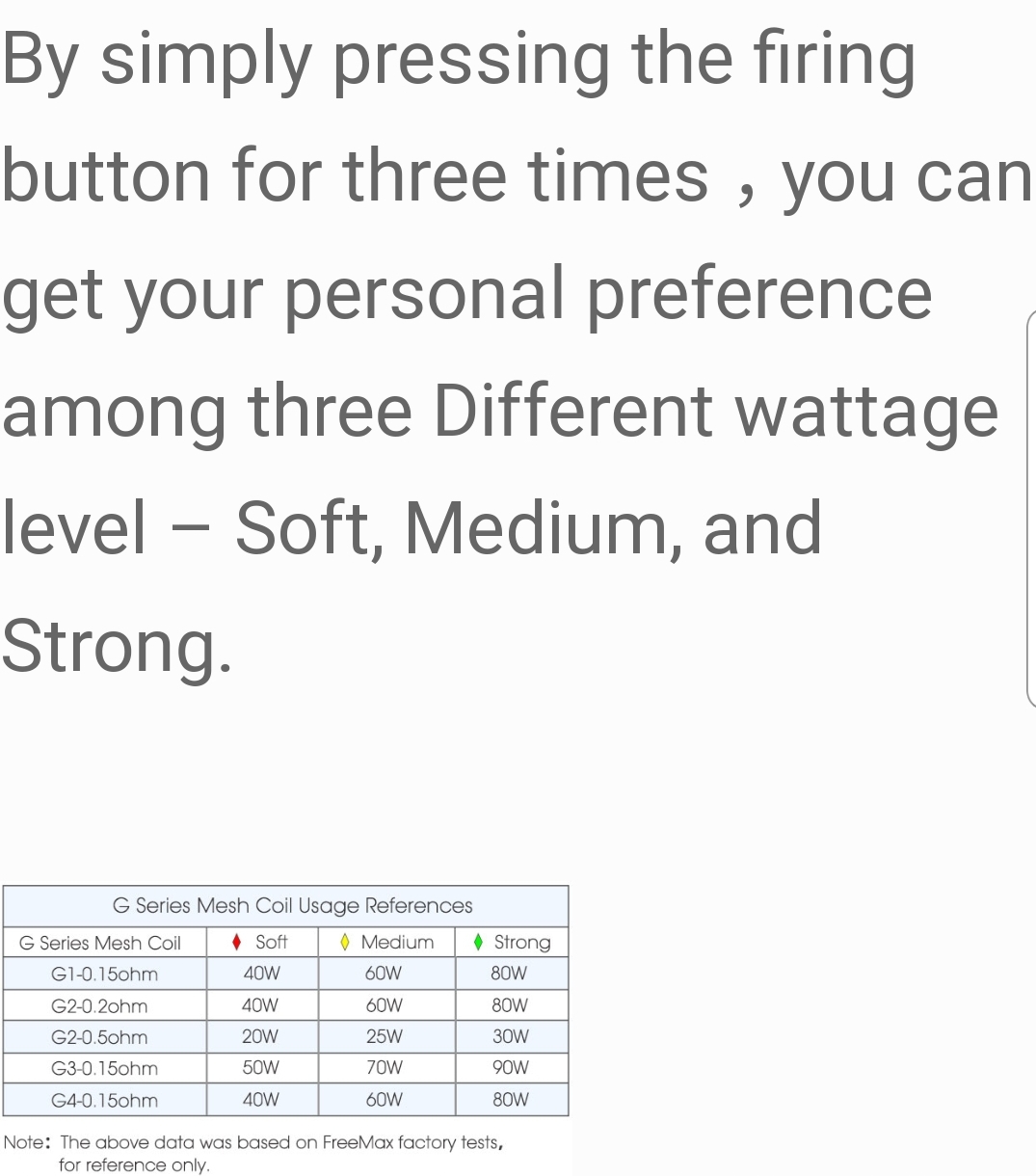 Rechargeable with a built-in 2900mAh battery and your usual host of protections for a safe vaping experience. I got very good battery life from the Gemm mod but charging was a bit slow. The USB charging port is located opposite the firing button and a good location to charge while the mod is standing up. Decent 510 with a medium throw and no problem connecting to any tank I tried. Good but not great battery venting on the bottom of the mod, would have liked bigger venting holes. 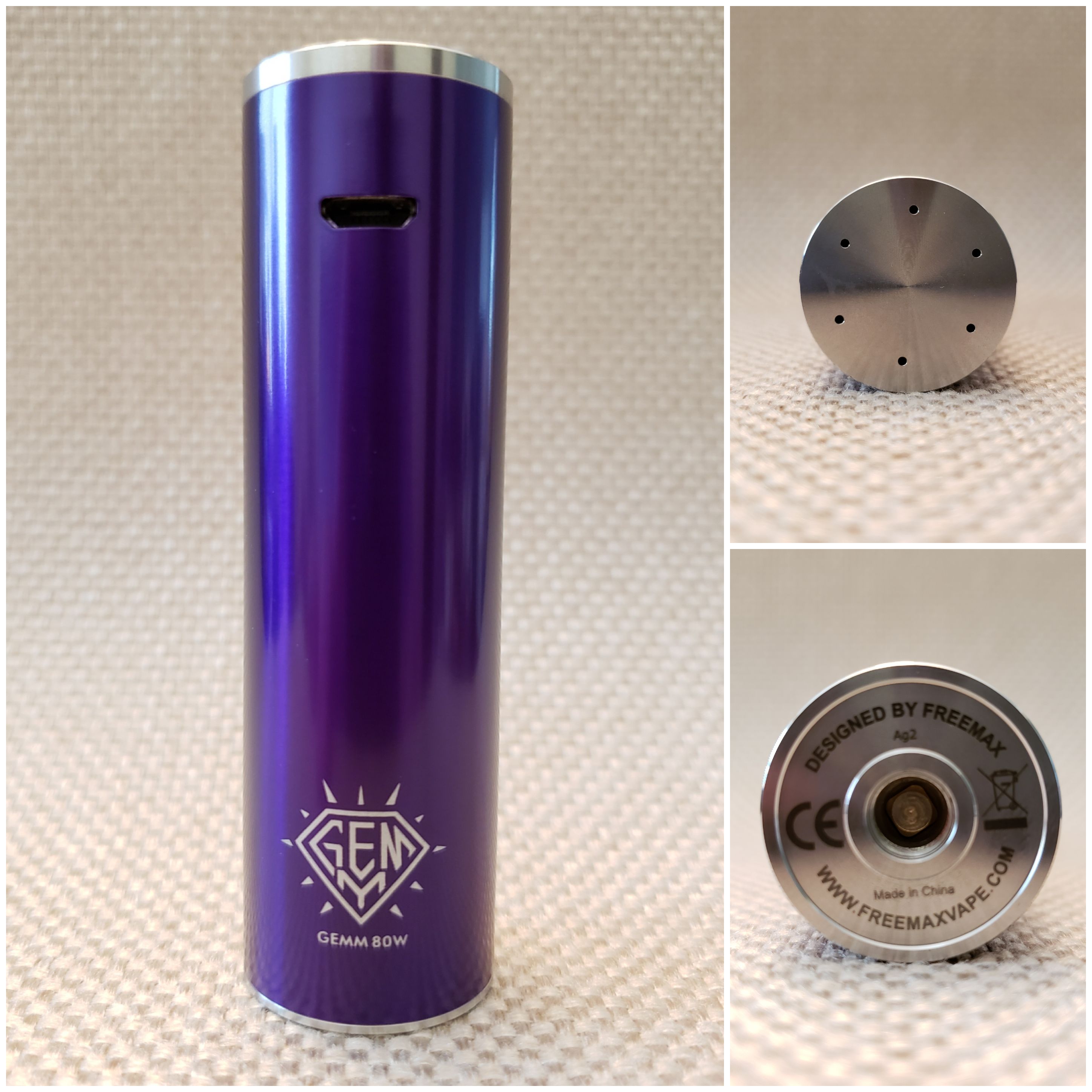 Overall not much to complain about aside from the slow recharging, not the slowest but not the fastest for sure. I did test it against other built-in battery with protection stick mods and the performance seemed on par. I do like the option to vary the output wattage, something a lot of these type of mods lack, I mainly used it at the max output, best performance for how I vape.

It is an attractive kit as well, I got the Prince Purple edition. 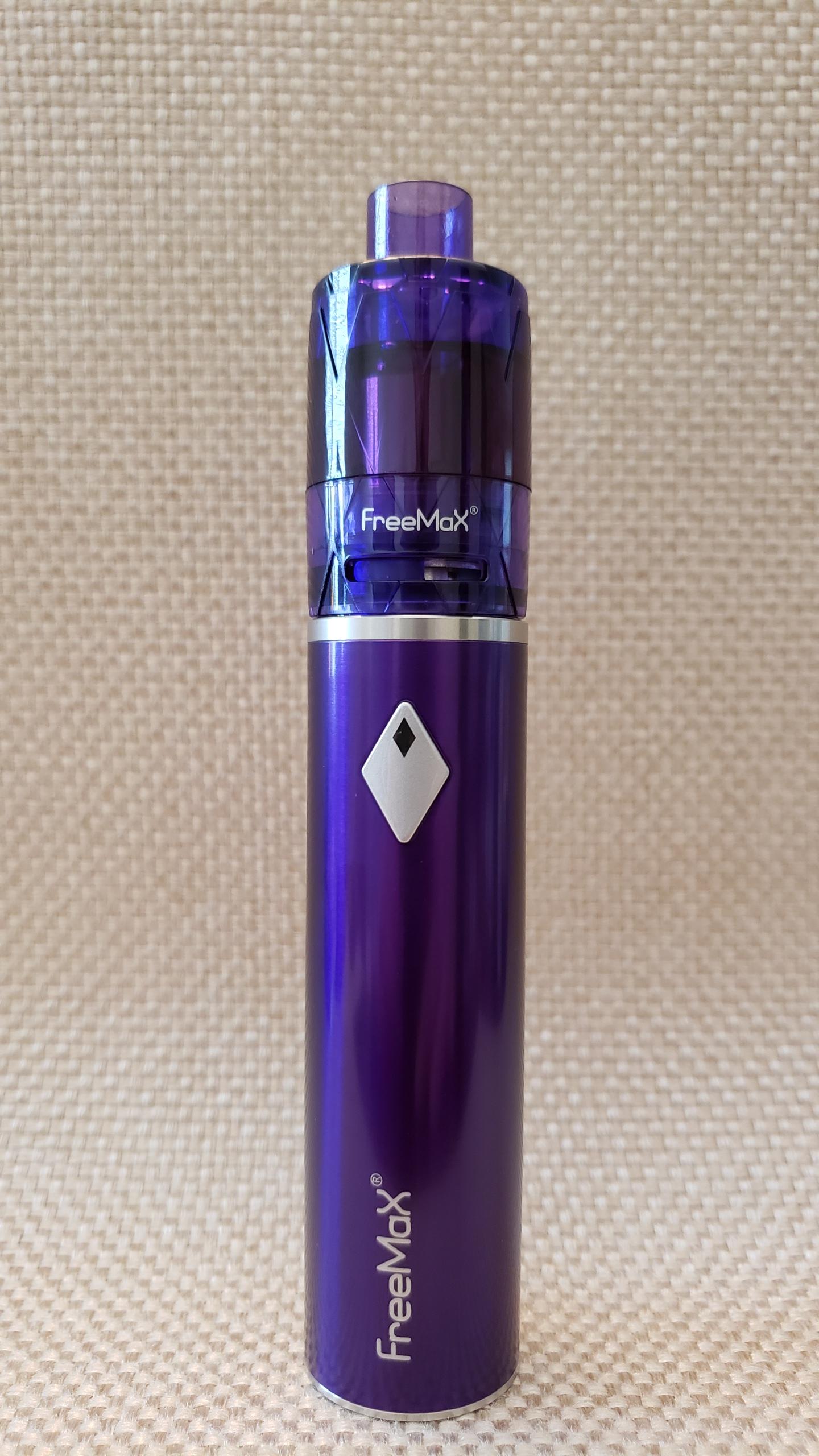 Getting to know the Gemm Disposable tank

The Gemm is made of eco-friendly PCTG material. From what I have read PCTG is also used for credit cards, a move to make these cards more environmentally friendly to meet standards set in 1998 for some countries.

Uses a silicone plug that stays attached when you open it to fill. Can be a challenge to fill with bullnose tips on bottles, works better with needle-nose tipped bottles but a larger fill port would have been welcomed. 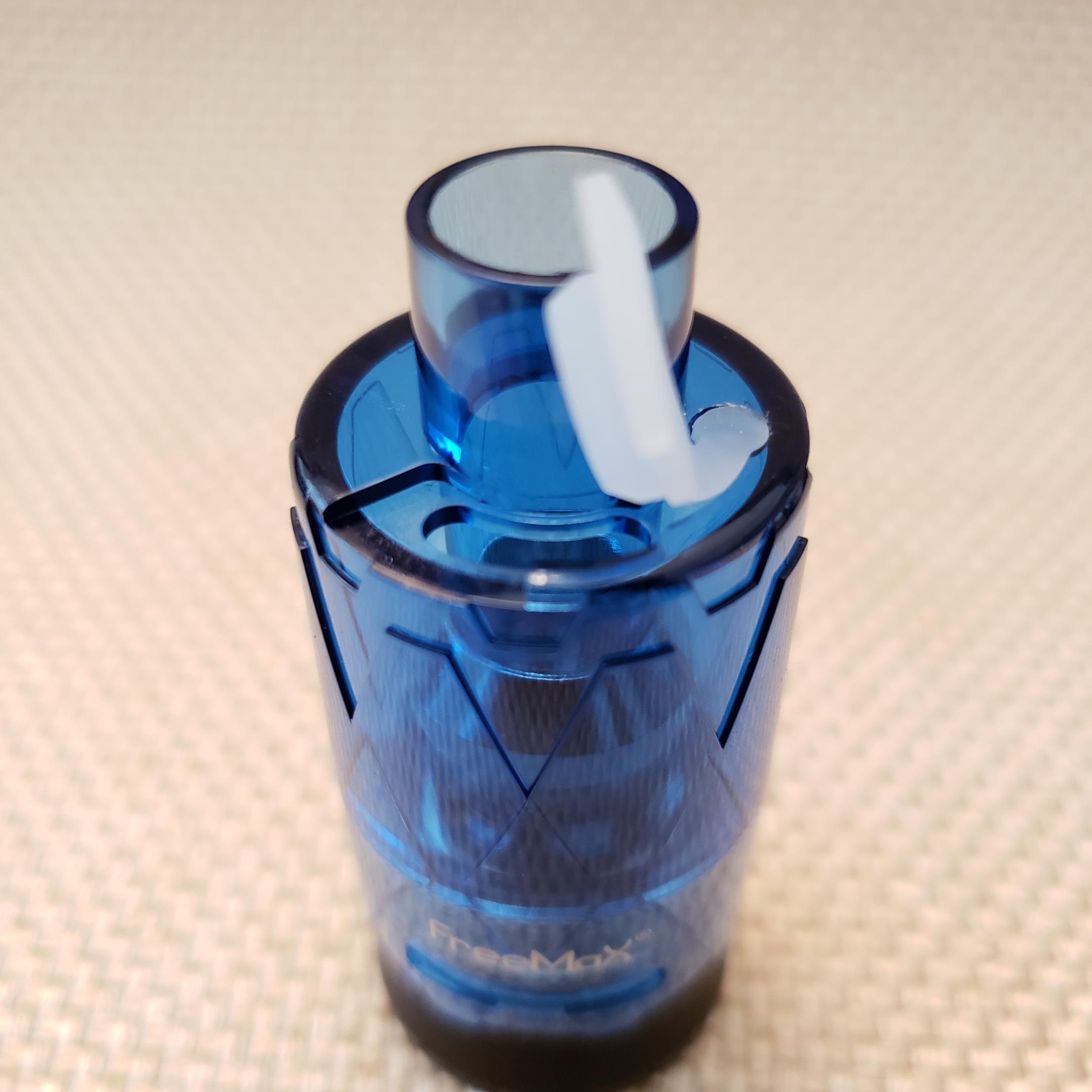 Just make sure the silicone plug is fully seated after you fill, in a rush I left my plug like this and got leaking. 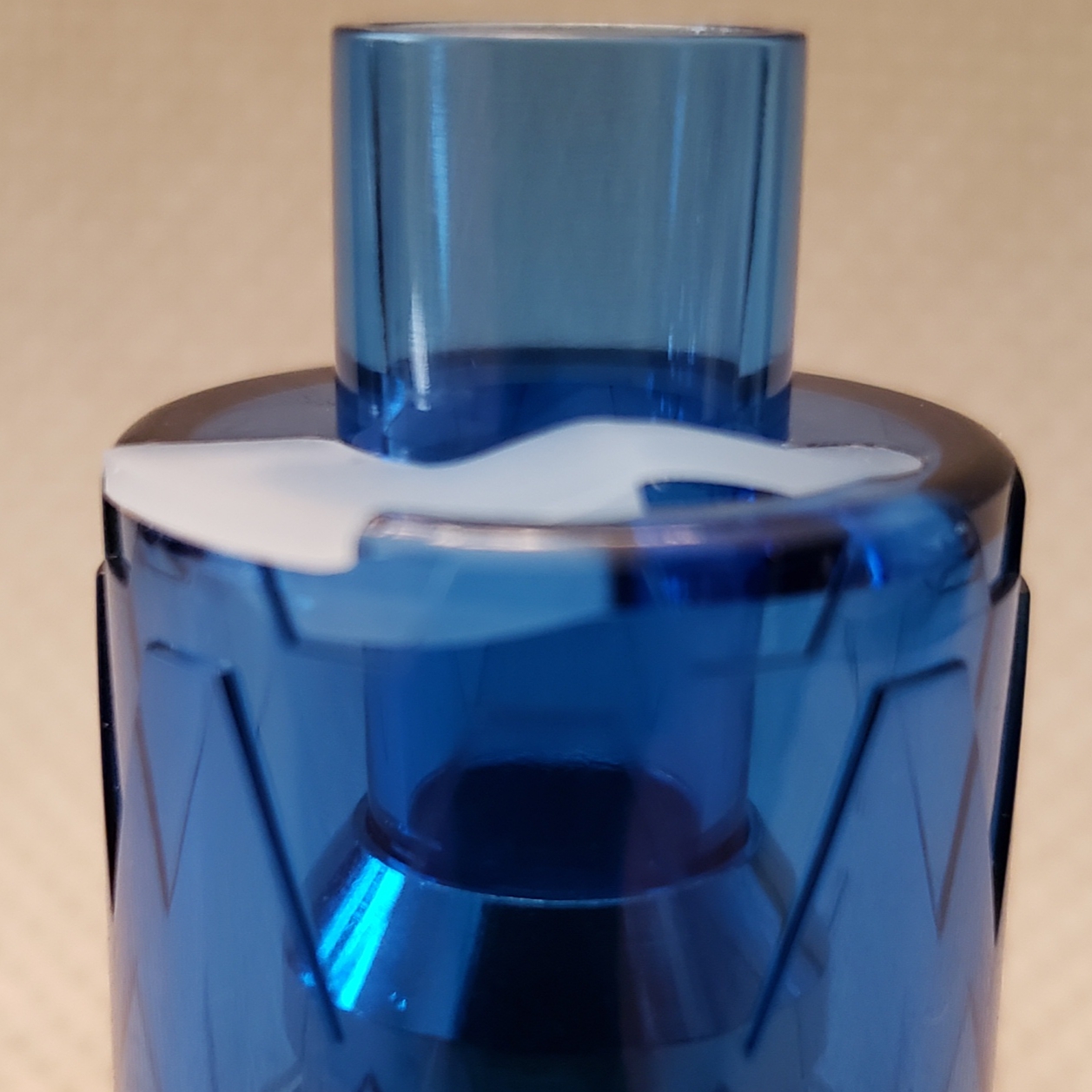 The Gemm can be purchased in multiple coil options, I tested the G1, G2 and G4. 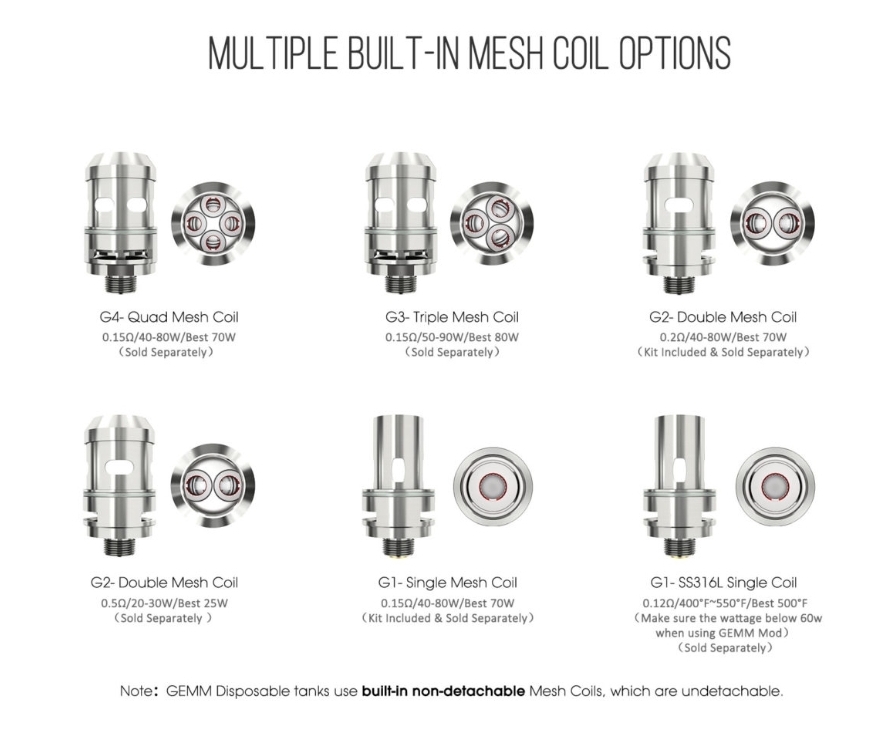 Airflow is adjustable, wide open it is pretty airy, I preferred it half to 3/4 closed as it increased flavor. 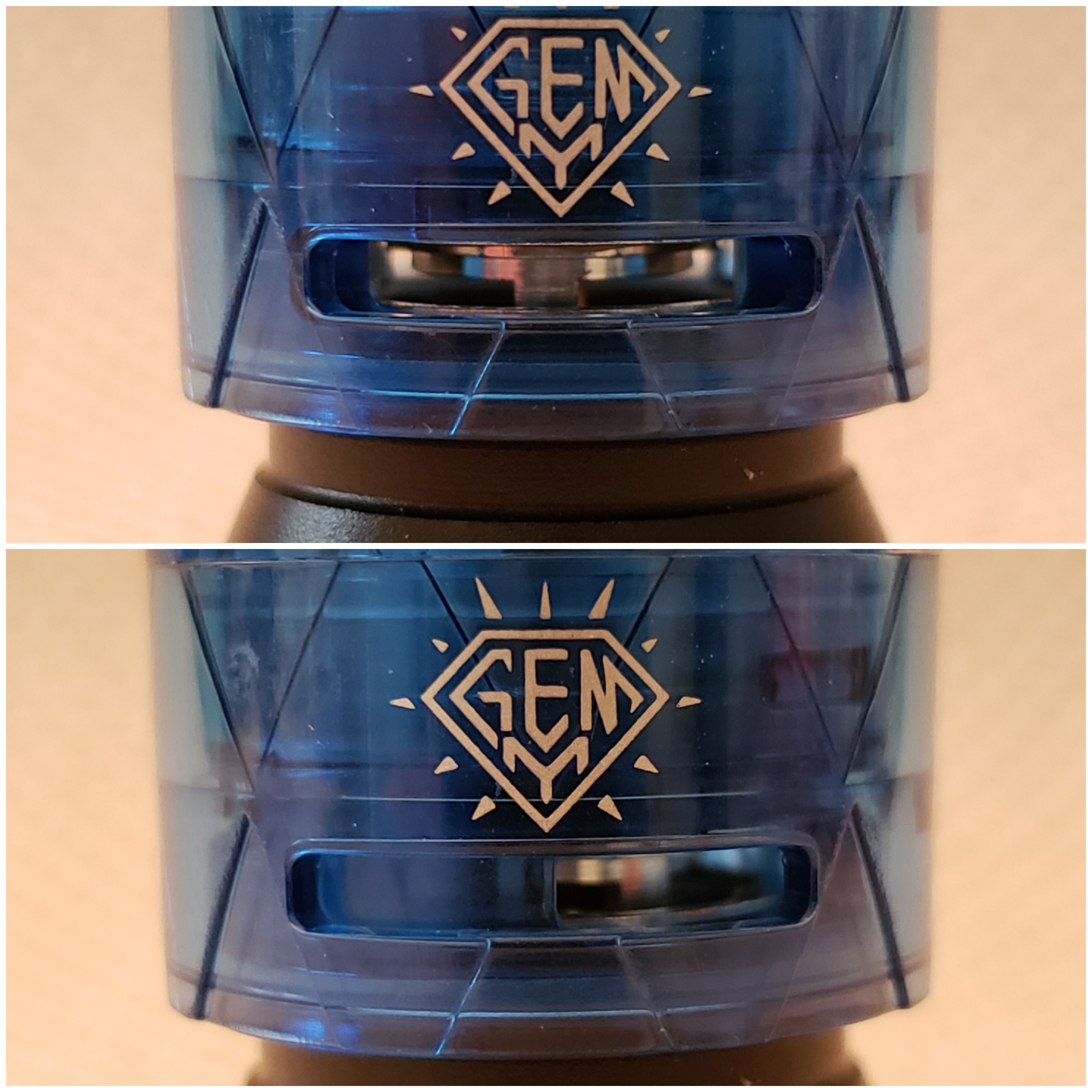 Instead of testing the G1, G2 and G4 coils separately I decided to try then all at the same time using the same juice and comparable mods. I also tried them on matching regulated mods to test how much power they can take.

Based on previous mesh coil experience I expected the multi-coil tanks to blow the G1 out of the water but to my surprise, the G1 held it’s own. On the first tank, the G2 dual mesh was my favorite followed by the quad G4 but it was close. As the coils had a few tanks run through them each and were fully broken in I have to say I had a hard time knowing which was single and which was the multi-coil tanks. I did tend to prefer the dual most of the time but it was close, kudos to Freemax for improving the single coils so much. I was curious as to why the single was so improved over other Freemax single coils so I took apart the tank and removed the coil to get a closer look, Freemax G1 on the top and new Freemax Mesh Pro single mesh on the bottom. 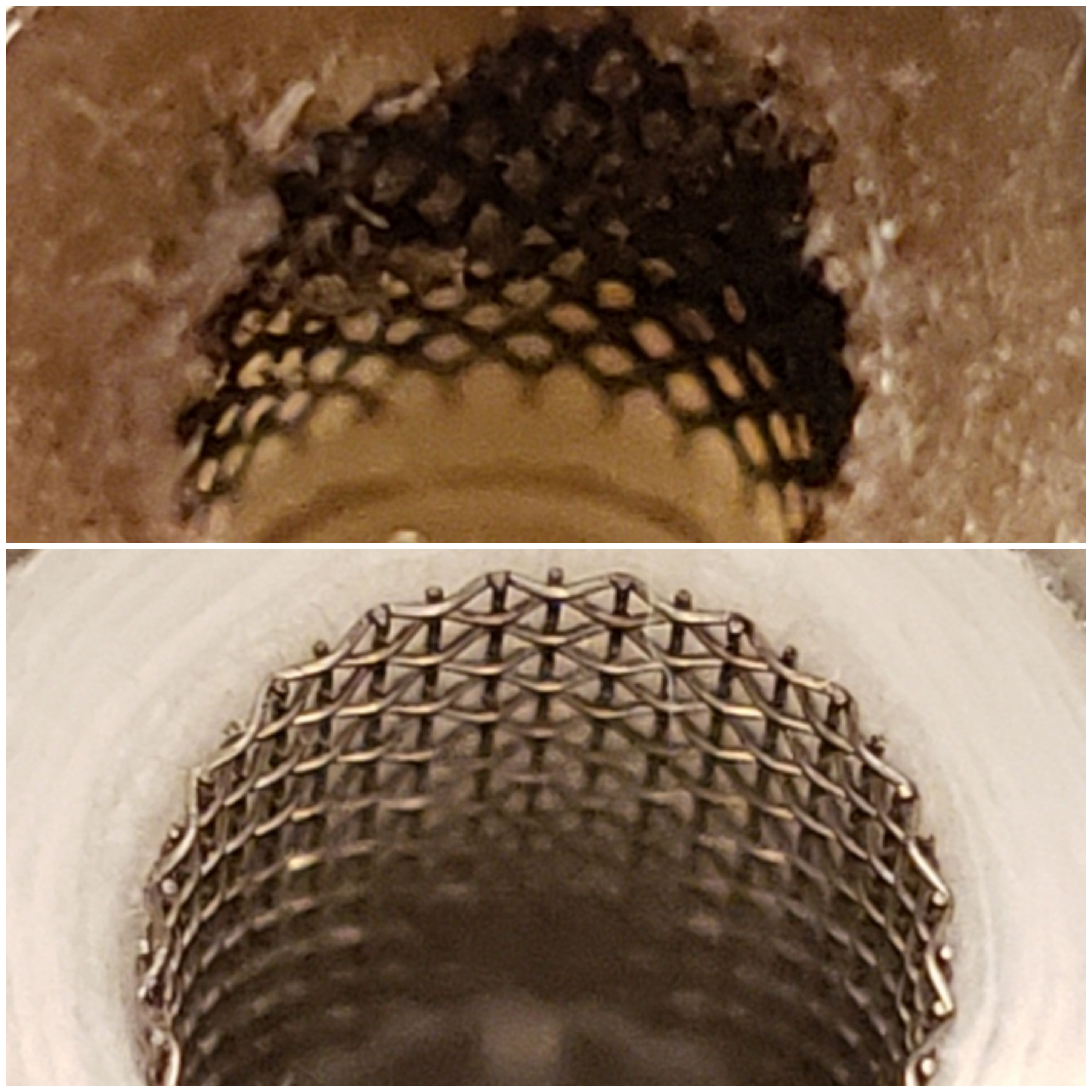 As you can see the single mesh coil has a new diamond structure, similar to what they use in the multi-coil. Add to that the new Tea Fiber Cotton they introduced in the Fireluke 2 and now it makes more sense why these single coils perform a lot better.

Coil life was good but not the best I have had, got a little over 50ml into all the tanks, the best being the dual coil, the worst being the quad coil.

Performance on matching regulated mods I found the G1 and G2 could take 80 watts easily while chain vaping, the G4 Quad I had to back off to 75 watts or chain vaping would lead to dry hits.

The Flavor on all 3 coils is what you would expect from Freemax, great. The G2 dual mesh was my all-around favorite but the G1 wasn’t bad at all. The G4 surprised me, I expected it to be as good or better than the G2 but that was not the case, it was my least favorite overall.

The purple tanks I got are dark so had a hard time seeing my juice level, the blue was a lot easier to see my juice levels. I can’t comment on the other colors but the white looks like it might be the easiest based on pictures.

No option to use your own drip tips, the opening is about the same as most 810 drip tips. Might be a con to those that like smaller 510 openings but it worked well for me.

Disposable tanks never made sense to me until recently when a friend was going on a trip and mentioned to me he didn’t know what vape gear to take with him. That made me think of the recent trips I have made and what I carry, gear that I would not miss if they got lost or confiscated by TSA. I generally carry on trips a couple of pods and a sub-ohm tank that is decent and extra coils along with a cheap mod. Looking at the prices on the Gemm tank I am seeing around $7 for a G2 2-pack, that is not bad at all. For the Gemm kit I am seeing under $25 and these are all from US vendors, I would spend more for a really good sub-ohm tank with replaceable coils than that.

The flavor on these tanks beats any pod on the market and most sub-ohm tanks, it really is that good. It won’t replace my Freemax Mesh Pro which is still one of my favorites with the dual or tripe coils. I would never take the Mesh Pro on a trip with me though, don’t want to lose it and the top fill may slide open, the Gemm is much better on a trip.

In the end, it is all up to the user to decide if a disposable tank is for them regardless of performance. I just wanted to get the info out so you can make an informed decision.

You can find out more here: https://www.freemaxvape.com/freemax-gemm-80w-starter-kit/

Great review @mjag, and YES, I did do a double take. “Wait, disposable tanks, what …”. BUT, after reading down, and saw how, and where the tasty-ness fell in relation to other setups, AND, your accurate, “Might not be the worst thing to take on a flight” comment, I think you were spot on.

What IS worse, TSA hassles, or landfilling !! ??

Great review, and an interesting read.

What IS worse, TSA hassles, or landfilling

Hahaha, still not crazy about a lot of waste, I recycle and all. These tanks seem to have close to the same amount of plastic as pods though and there made from a eco friendly material.

I really wanted to bash it but can’t fault the performance. I will stick with my rebuildable mesh tanks, those will never see a TSA inspection though

I really wanted to bash it but can’t fault the performance.

@mjag no finer words could be spoken by a “Reviewer” IMO.