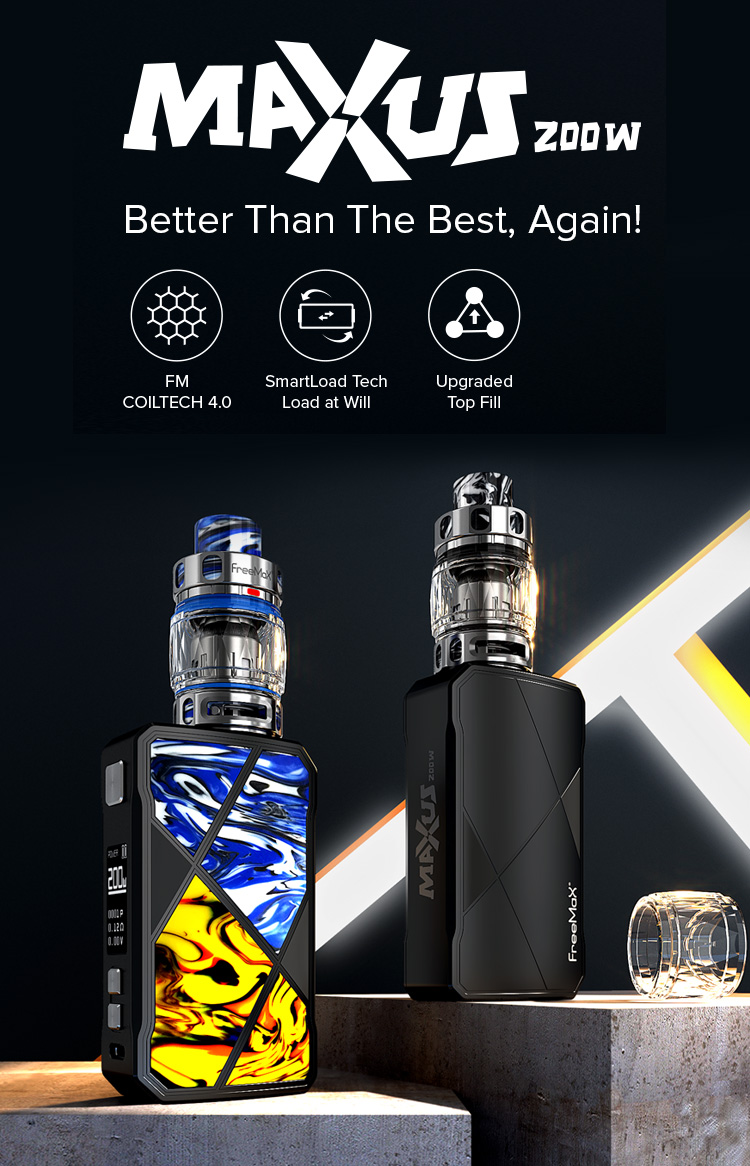 I was excited when I was asked to review this. New box mod kits are always welcome IMO. I’ve been writing about mostly pods recently. When I heard about the new M Pro 2 tank, I really wanted to try it. I’m a big fan of Freemax’s coils and tanks. They’ve always been one of the best companies as far as making great performing coils. The mod also has some interesting features so let’s jump in.

This product was sent to me by Freemax for the purpose of the review. That fact will not affect my opinions on this kit.

What you get in this kit is a dual 18650 capable mod with a side battery door. I say capable because it powered on when I stuck one battery in it. Speaking of sticking batteries in, I was confused when I took off the side battery door. I didn’t look over the instructions booklet and just opened it up. The battery orientation wasn’t marked with “+ & -” but instead had up and down arrows. I thought to myself, that’s strange. Then I saw engraved inside “Smart Load : LOAD AT WILL”. That’s right, you can use one or two batteries and stick them in however you want to! The mod doesn’t care which way you set them in which is something I’ve never heard of.

The mod is similarly styled like a Voopoo Drag, Vaporesso GEN or Geevape Nova. The screen is on the side and there’s a battery door panel that’s removable. The mods look to be all black but depending on which kit you get, the battery door panels have a combination of two different colored resins. They’re powered by the new FM CHIP Maxus 1.0 chipset. It fires very fast and has a few features. It’s a pretty basic functioning mod though but works well.

The screen is simple and shows most of most important information. It shows both of your batteries power level on top. Under that is your wattage setting. That’s the largest numbers on the display. Below that is a puff counter, resistance or ohm reading, and voltage. The voltage is always at 0.00V until you fire it. You can it in a mirror but when you let go of the fire button it goes back to 0.00V. I don’t know why that’s so common with mods.

The fire, up, and down buttons are stainless steel I’m guessing and nice and clicky. It’s the standard five clicks on and off, and three times to go into the menu. In the menu there’s watage, wattage curve, TC modes, and TCR Modes. You can also adjust a few settings like screen timeout or reset your puff counter. Pretty standard stuff. The main feature that stood out to me was the way it accepts one or two batteries any way you want to put them in.

The 510 pin has two hex head screw that holds it down. It’s placement on the mod is a bit off center.

I’ll admit, when I first saw it I thought it was a funky looking tank. It’s a combination of stainless steel and resin peeking through in certain cut outs. The resin on top of the tank and drip tip is very smooth and polished. The parts where it’s peeking through the holes looks to be sealed with some kind of coating.
This tanks predecessor was a VERY popular tank and for good reason. The coils for it are outstanding but it had a major flaw IMO. The top fill method was a slider top that opened way too easily. If it moved open just a little bit it wanted to dump out all of its e liquid. I know because it dumped out in my pockets and in my bag several times. This new M-Pro 2 tank has the same method but they’ve added a stiffer sliding feature. They used ball bearings to help hold it in place. It doesn’t slide open as easily which is a good thing. It hasn’t leaked on me once since using it. My preferred top fill is the quarter turn top cap but I know some people prefer a cap that isn’t removable.

The tank is the same size as the older ones. It comes with a “diamond cut” type glass section on it. The glass can be switched out for an older M-Pro glass or even an original Fireluke glass. I like the consistency.

They came out with a new line of coils for this tank. They’re the same size as the first Mesh Pro so you can use them in your older tanks. These ones use SS904L mesh with a combination of cotton and tea fiber cotton. You get two coils in the kit. The pre-installed coil is a dual mesh and the other one is a single mesh. They plan on releasing a triple and quad (SS904L) mesh also.

I’ll start of by saying I haven’t “Primed” a factory coil head in years. I put the tank together with the coils inside dry. I add liquid and watched the wicking material. That combination of cotton and tea fiber cotton is awesome. It went from dry to completely wet and saturated in under one minute. I view priming as an obsolete practice that’s totally unnecessary with today’s coils. If you don’t believe me, try it once and see. Or don’t, I don’t really care one way or the other. I’m just a bit sick of YouTube reviewers acting like it’s essential. Okay, enough about that.

I used Naked 100 Lava Flow with this coil. The style of “mesh” in these is a really thin honeycomb styled mesh in each cylinder. I ran 60ml through it no problem. I looked at the mesh when I took it out and there wasn’t much gunk on it. I used it at 75W almost the whole time. The flavor was almost intense. It was really vibrant and it left that sugar lips feeling on my mouth I’ve heard people describe. Towards the end of the bottle the flavor might have tailed off slightly or I just go so used to it. When I use one flavor a lot, I kind of lose the ability to taste it. In any case, this was a phenomenal coil to vape on.

Again, this one I put in dry and added liquid to the tank. It was SOAKED in 45 seconds. I used Propaganda Blue Frost (from their “Hype Colllection”) with this coil. I mainly used it at 55 or 60W with the airflow closed down a bit. It’s a really airy vape with the AFC wide open. For whatever reason, I think this took a bit to get broken in. The dual mesh coil seemed to perform better right out of the gate. I think I may have gotten a bit more flavor out of that one too. The single mesh is still a great coil. It’s one of those strip coils with the holes punched into it. The flavor is still pretty darn good and I still have in the tank right now. I burned through almost half of a 100ml bottle of Prop. Blue. The flavor hasn’t declined. People who don’t want to burn as much liquid and battery life should like it. I’ve just always enjoyed dual and triple mesh better in these high performance tanks. I think it might have to do with the smaller cylinders, I dunno…

This is a pretty good kit. The mod is a bit unique with the battery situation. I’ve enjoyed using it. What I really love is the new coils and tank. It’s just a terrific experience using it.

My mod had a very slight movement on the battery door. I passed it along to my contact and they assured me they will make an adjustment. It’s nothing to crazy or even annoying. It just moves slightly while trying to push it around.

Big thanks to Freemax for letting me try this one out. Thanks for reading if you did. If you have any questions, I’ll do my best to answer.

Great review
The load at will has me intrigued, do both batteries have to at least be oriented the same?

Great review @INOIROC. Like @CosmicTruth that Smart Load (load at will) has me intrigued as well. Nicely done Sir.