Freemax keeps pushing the envelope, first with the original Mesh tank that got everyone scrambling to make mesh coils for there subtanks. They then upped the game with there excellent Mesh Pro which was the first to come out with dual and triple mesh coils. Still love my Mesh Pros and the only prebuilt coil tank that I still buy more coils for.

They have upped the game yet again with the introduction of the first Quad Mesh coil which is up for review here. Since I have already reviewed the Mesh Pro I will just talk about the differences between the Resin and new Metal version they sent me, you can read my original review here: Freemax Mesh Pro review by Mjag...Sugar lips?

When the Mesh Pro was first released it was only in the resin as shown below.

They have since released both the Carbon Fiber and Metal editions.

They were kind enough to include the new Metal edition along with the Quad coils for this review. Shown here sitting on the Augvape Druga Foxy. 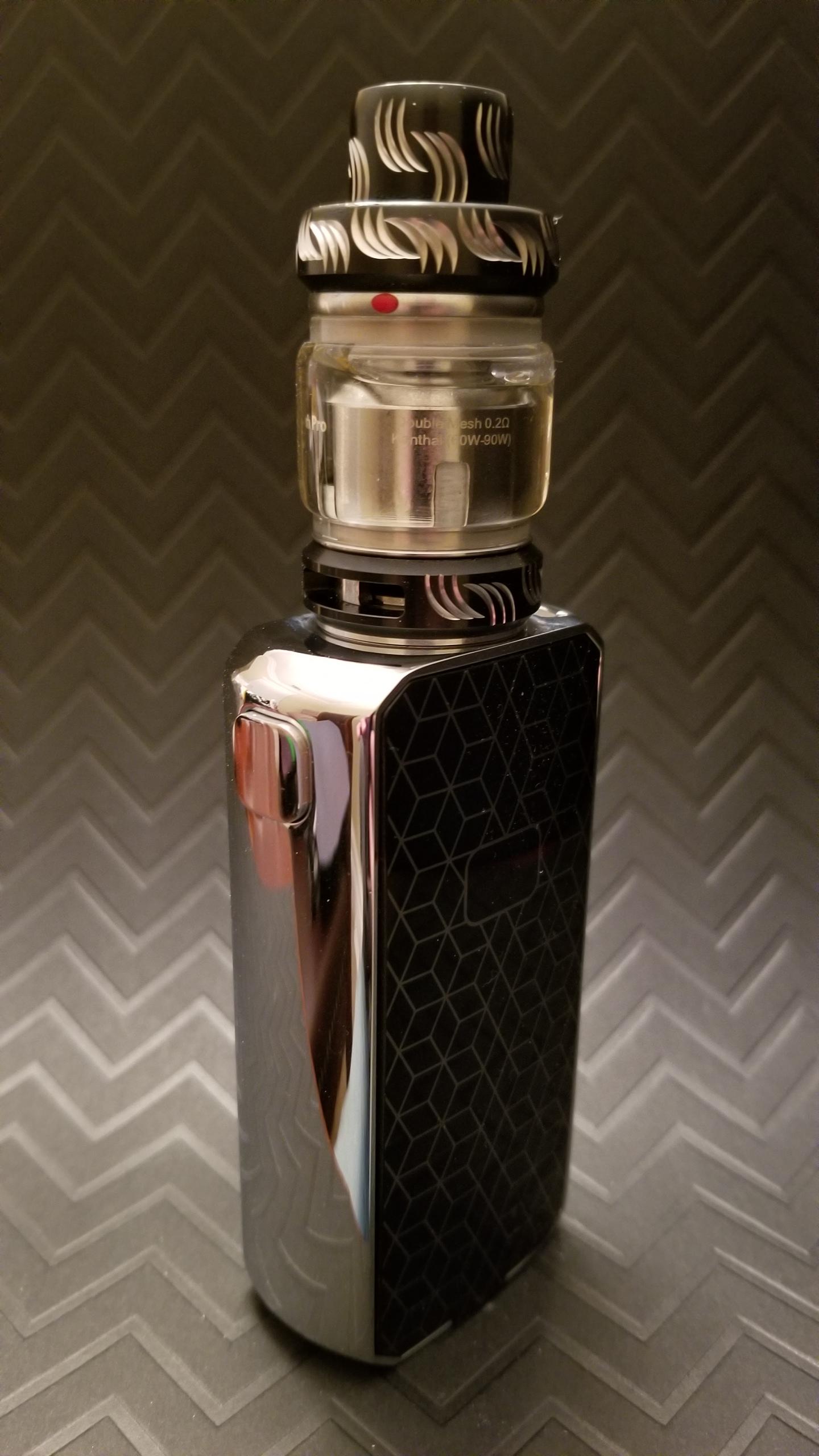 Now the difference between the new Metal and Resin editions is well…one is Metal and the other is Resin. 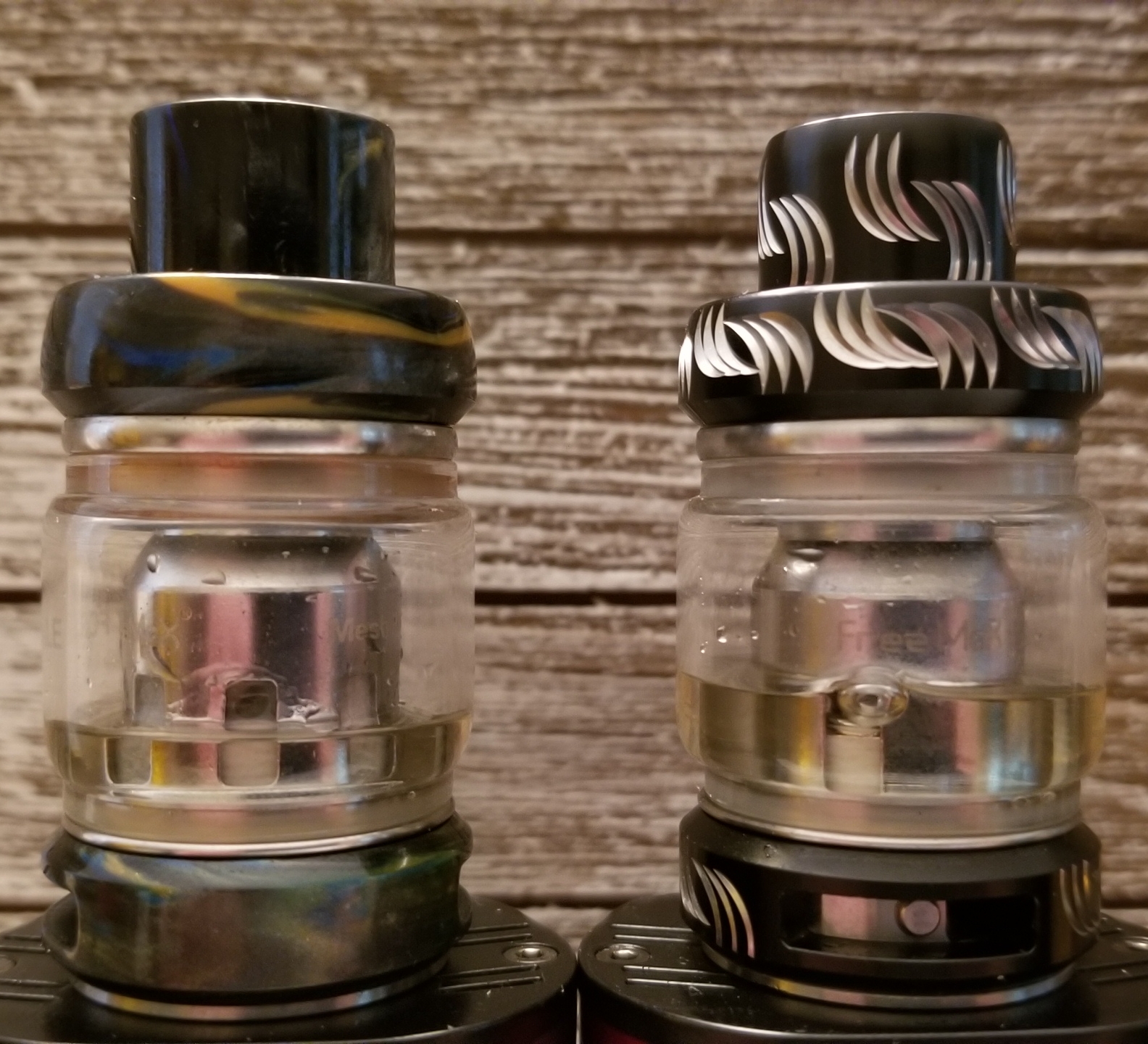 The Metal edition also includes a Metal 810 drip tip, if you hate metal drip tips then you will want to opt for the Resin edition. It has been cold out here lately and that metal drip tip gets cold too so keep that in mind.

Now on to the Quad coils

I started my evaluation of the Quad Mesh coil by comparing it to my favorite of the bunch, the Triple Mesh coil. Both tanks thoroughly cleaned and the same juice in both, a Strawberry Gelato which I am very familiar with.

First thing I did was open up the airflow on both tanks and found the Triple has more airflow. Measuring the openings on both I found the Triple to have approximately 4mm openings, the Quad only about 3mm. Not a huge difference but noticeable on the draw.

After priming the coils and allowing the juice to soak in for 20 minutes I began both at lower watts of around 75 to break them in and slowly raised the watts to about 95 which is usually my sweet spot. The flavor was definitely different between the 2 coils, the Triple being more bright compared to the more laid-back flavor of the Quad. After using both tanks for about 9 days I favored the Triple with fruit mixes. Not a huge difference but the Triple gave more vibrancy to the fruit flavors which I preferred.

At the same watts, the Triple is more thirsty than the Quad, it was always the first that needed filling. I tried my best to take the same amount of draws each time to keep it even and had the airflow about the same.

I then opened up the coils to see if there was any difference in the coil structure. 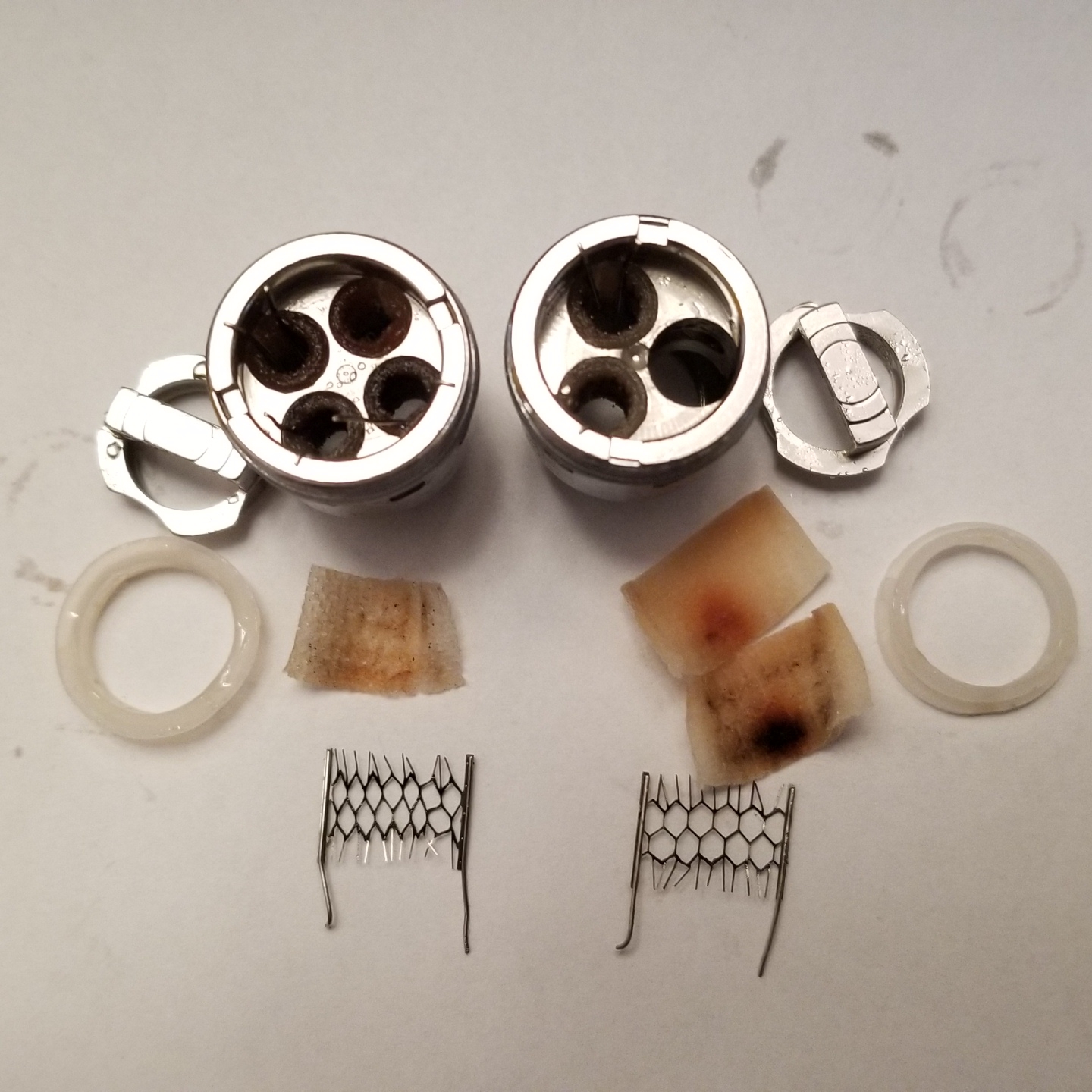 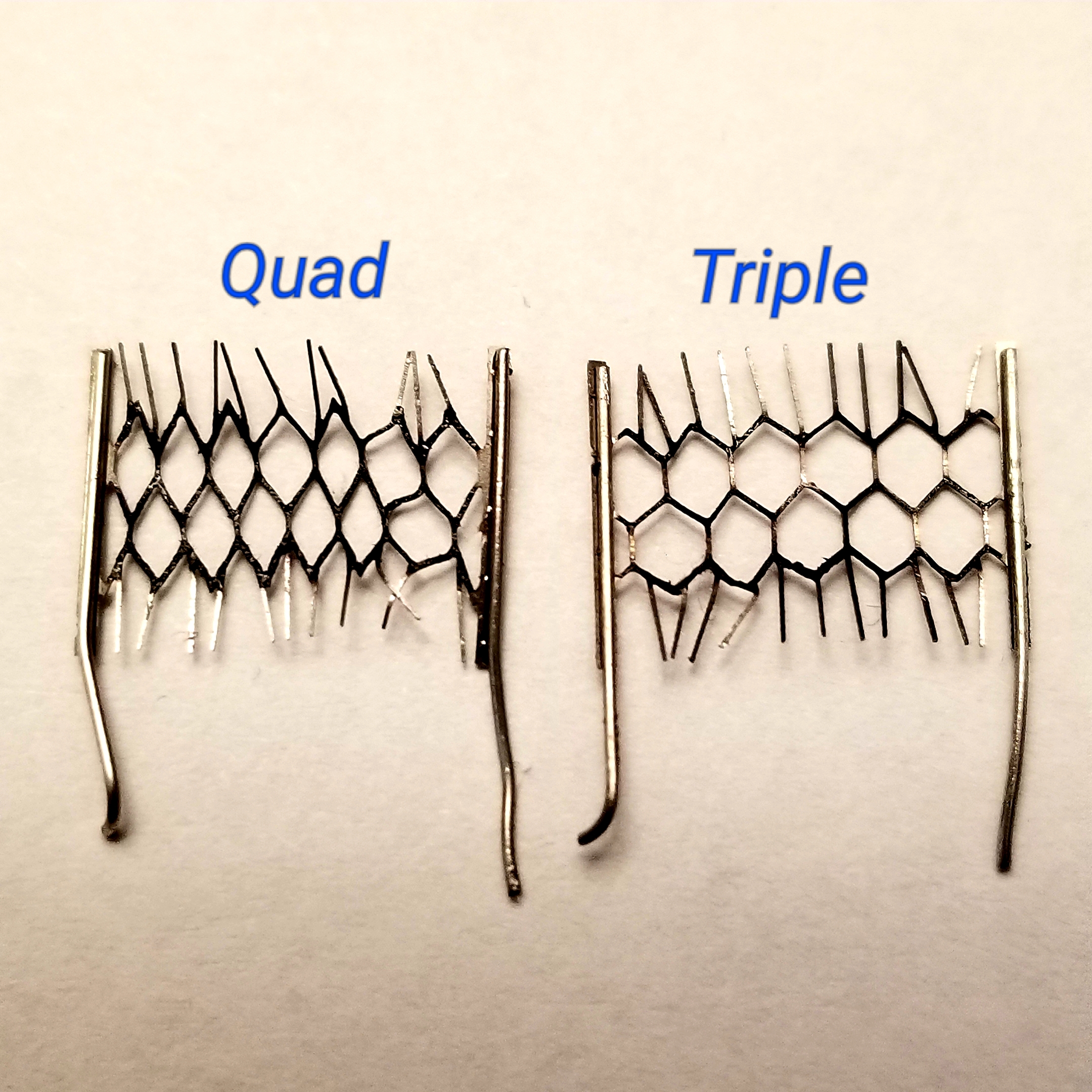 As you can see they’re pretty similar, the Triple is more spaced out, the Quad has a tighter mesh but the structure seems the same.

I then decided to try the Double Mesh compared to the Quad Mesh. This time I started with a Vanilla Custard, an ah-ha moment for sure. The Double Mesh was still brighter but with the rich custard that was a con. The Quad delivered better flavor with custards and creams as well, flavors that rely on richness rather than vibrancy. I then went back and tried a Strawberry Custard and the Double made the Strawberry pop just a little more but the Quad still had a little more richness in the custard.

Here are the 3 coils for comparison sake. 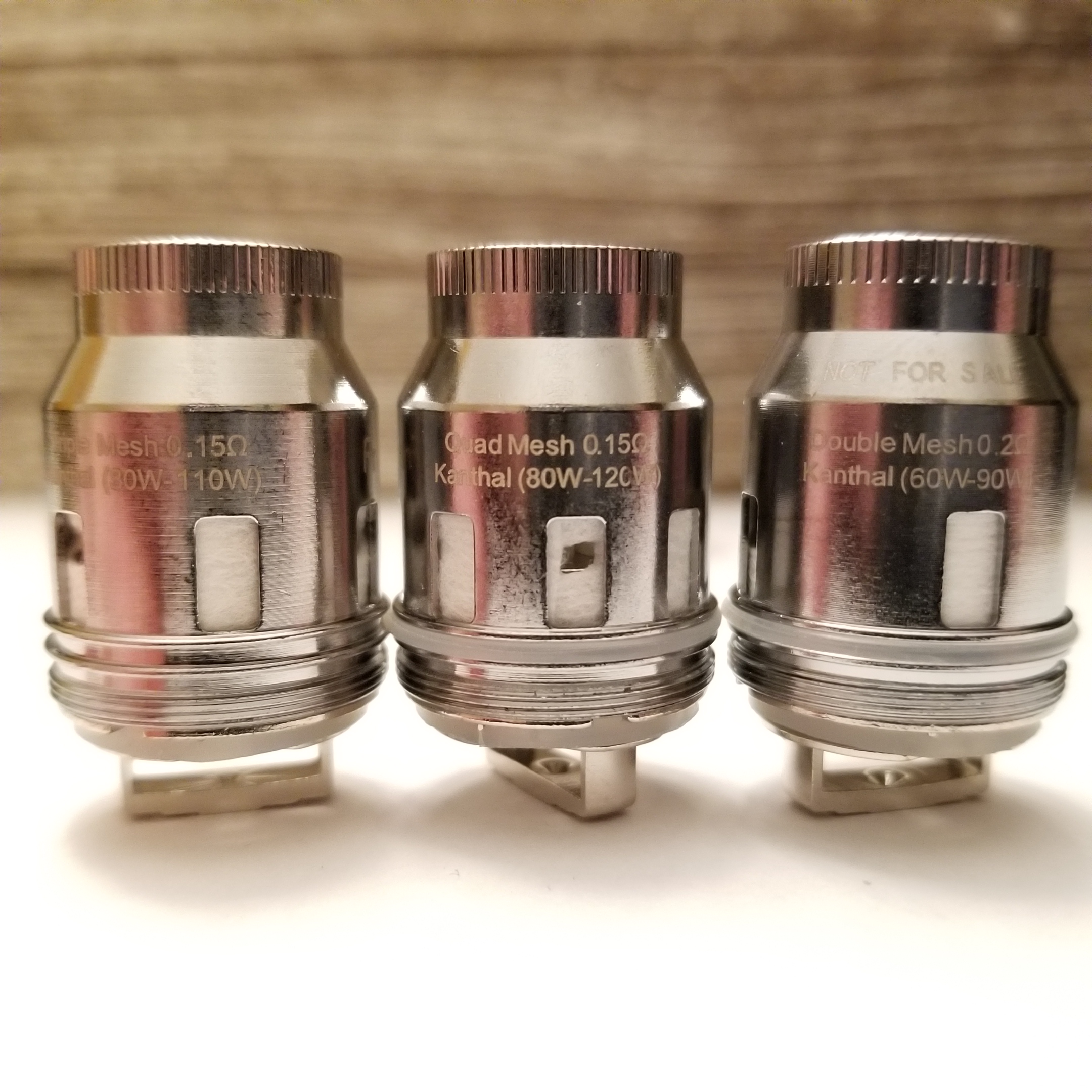 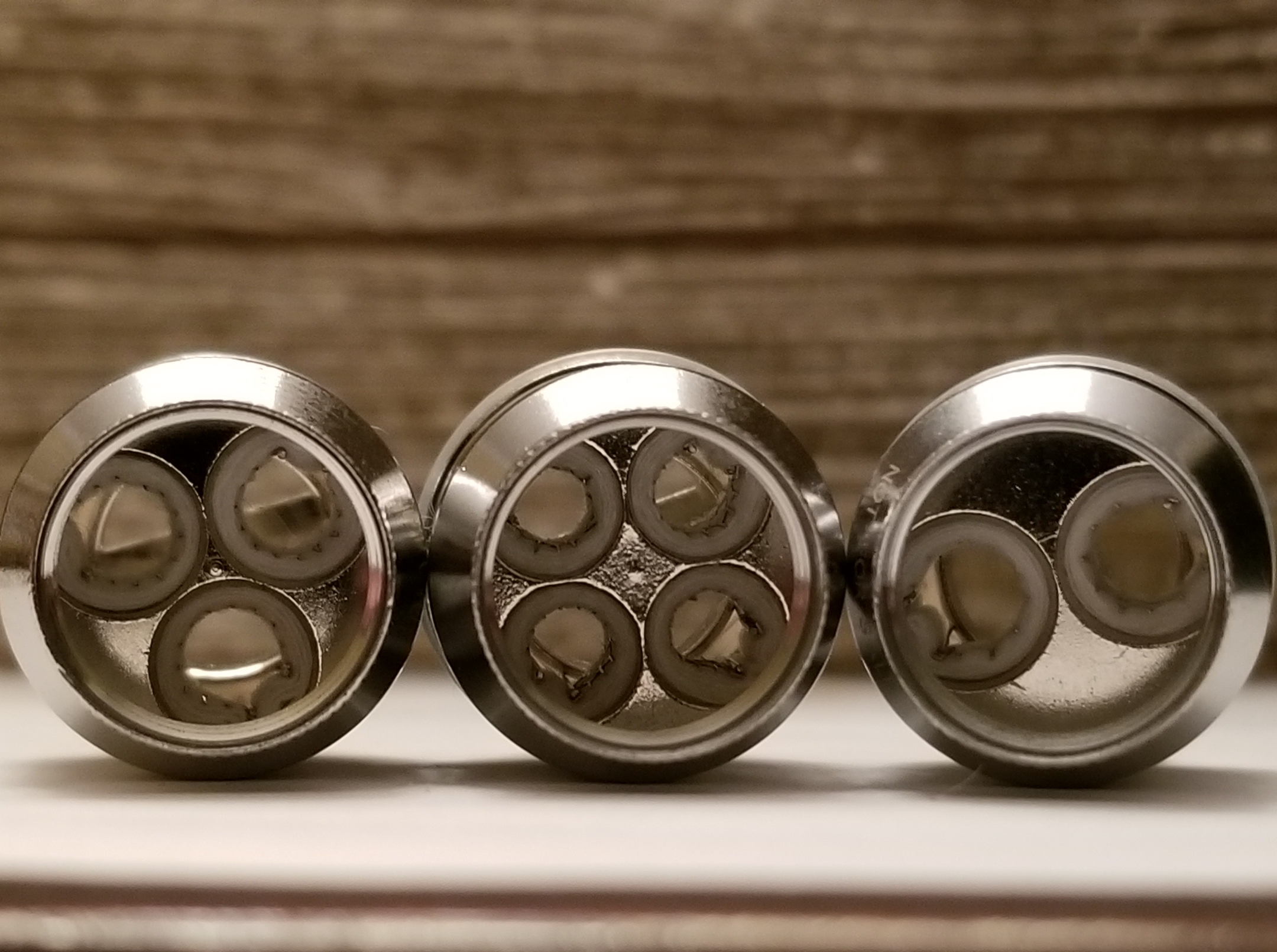 The Quad is rated up to 120 watts and it wicks and works well there, I even went up to 130 watts with no problems. 150 watts…nope, almost coughed up a kidney trying that but it is accurately rated just like the other coils in the lineup. My sweet spot was 95 watts with the airflow closed about 3/4 using the Quad and it is not a hot vape. I could easily vape it as 120 watts comfortably but the juice consumption is ridiculous, you will be filling it up all the time. Not like it is a miser at 95 watts, expect to fill it up multiple times throughout the day. It does reward you with excellent flavor though but the drawback will be juice consumption and less battery life.

One thing I need to note on Freemax Pro Mesh coils is the o’ring is usually off in the package. 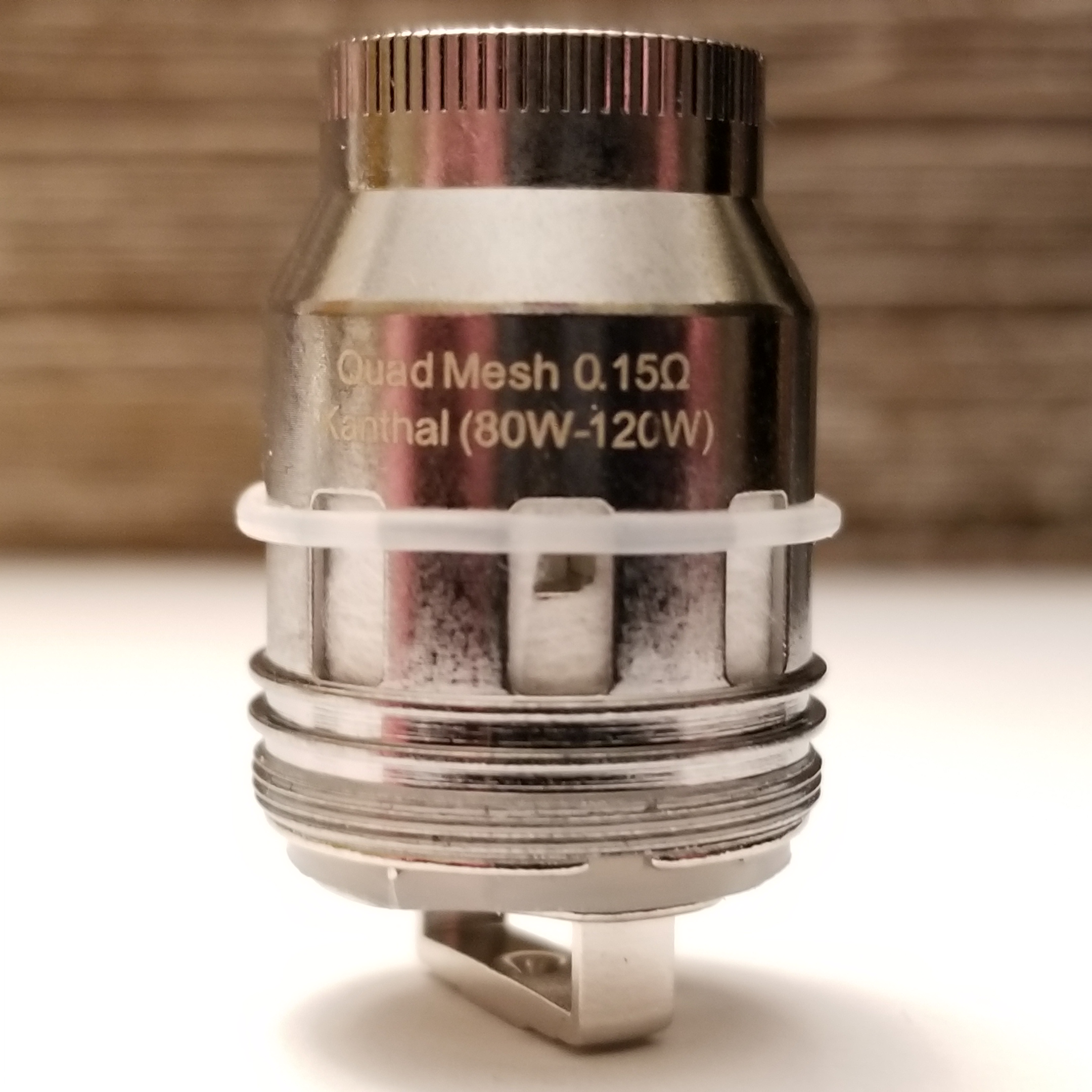 Make sure when you take it out you put it back in place before you install it. 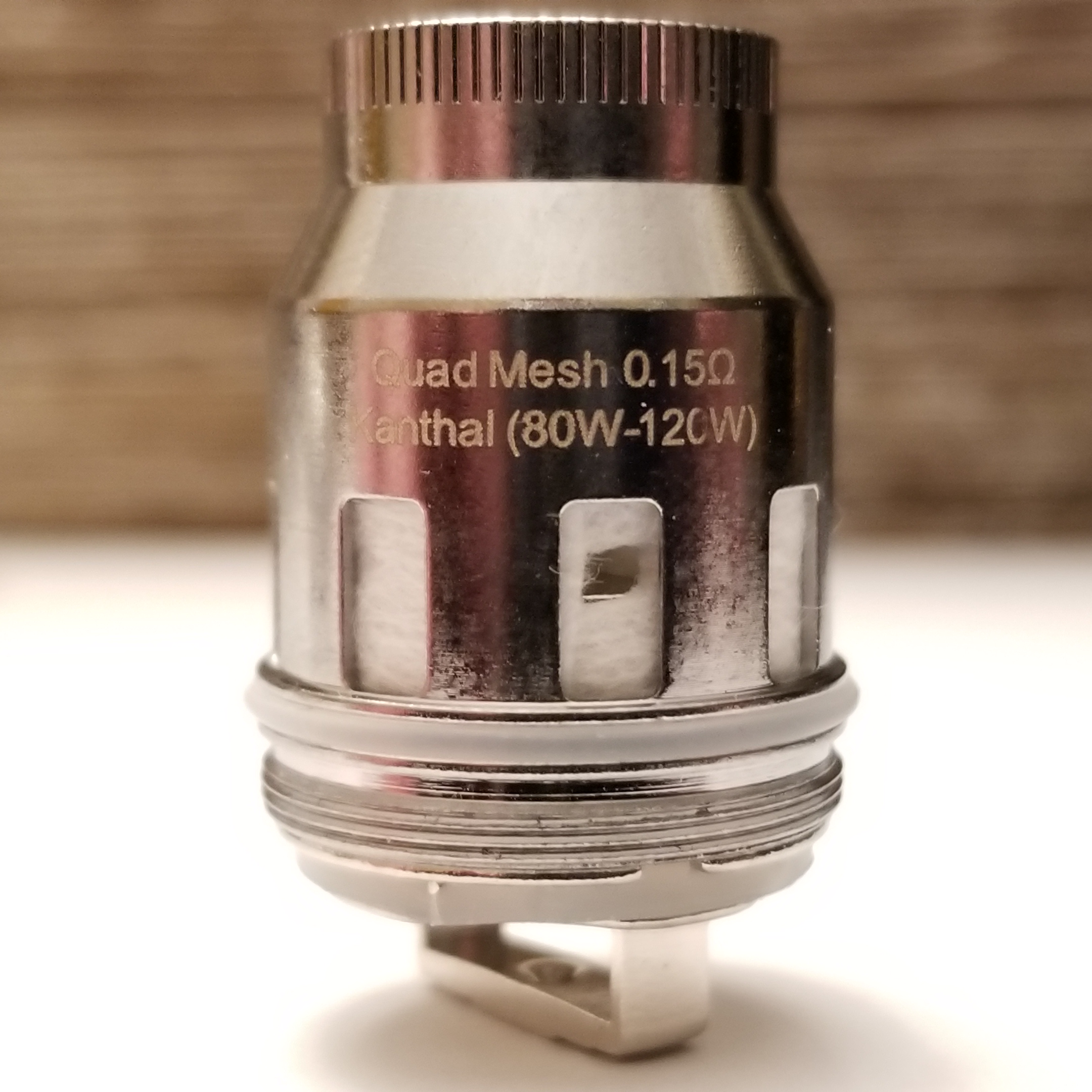 Take a look at the 3 coils I pictured in the comparison photo and the one on the left has no o’ring, it was in the package when I went to put it back on. I hope Freemax is more careful in the future when they package up the coils as some people may not notice and that will lead to leaking.

The Freemax Mesh Pro is the only tank with prebuilt coils I still buy coils for, I am mainly an RTA or RDA guy. Since my original review, I have purchased numerous packs of the Triple coils and will continue to do so as I still use the Mesh Pro most days. Will I now start buying the Quad mesh coils? I have a few ADV juices that the Quad has an edge with flavor but the vast majority I still prefer the Triple. If the Quad is more expensive then I will just stick with the Triple, if I find it on sale for less then I would pick up another pack of the Quads.

I hope I have helped in some way and if you have tried both I would love to hear your thoughts. We all have preferences and I hope I explained mine well enough for you to make an informed decision.

You can find out more about the Freemax Mesh Pro and all the coil options they have right here: http://www.freemaxvape.com/meshpro/

I may have to get a freemax mesh tank… Ty for,the review. I still use a couple sub ohm tanks so I have not quit using them yet…

Thank you @SessionDrummer and @fidalgo_vapes

Like the both of you rebuildables is what I carry the majority of the time unless I am too busy for
a new build, then I grab a sub-ohm tank. For me the Mesh Pro is the best of the bunch with the triple coil, closest to a great RTA. Still break out the Horizon Falcon or Crown 3 but once I run out of coils for those 2 they will get retired.

my go to sub ohms are the OG crown,and Cleito but the cleito has a great RTA so coils don’t have to be bought the of crown I still buy coils when they are priced right

Can’t go wrong with either one of those, love the Cleito RTA as well. I ran out of coils awhile ago for the OG Crown, not much of a coil buyer anymore expect for the Mesh Pro.

If I’m not mistaken, these are compatible with the Vaporesso nrg coils?

I’m currently vaping on one of their single mesh coils but I’m not very impressed with flavor or the power rating. These might be a good alternative if they fit

The NRG coils I have are baby beast compatible unless there are some new ones I missed. Those coils will not work, the Pro Mesh coils are bigger.

Thanks, too bad though… have to use my RTA again. Flavor over convenience!