I’m putting together a flavor order and want to expand my fruit flavors. Link to flavor stash: http://e-liquid-recipes.com/publicstash/53541

So far, I have these on my shopping list:

I’ve had raspberry flavors (blue raspberry tfa and raspberry fa). The recipes I made with those went into my Fail category and am giving up on those flavors.

I was wondering about other fruit flavors, such as apple (I used to buy a green apple juice that I liked), peach, pear and maybe pineapple. Any recommendations on brands or particular flavors I should consider?

Some good flavours that you’ve got so far! Love the banana flavours and TFA banana cream is a winner in my books but I can’t say I’ve tried the LA version. TFA Raspberry Sweet is a great flavour (I have to restrain myself from putting it in every recipe I make). Hazelnut is a good flavour, smells fantastic, hard to find a place in a recipe though unless you like coffee and tobacco flavours? TFA Kiwi Double is a good one, keep going back to that now and again - in fact I’m vaping right now on a recipe I made using TFA Banana & TFA Double Kiwi, really good all day vape! With fruits, I’d recommend going for TFA Apple, TFA Raspberry Sweet, TFA Banana, TFA Strawberry, TFA Kiwi Double, maybe TFA Peach. I’d ditch the TFA Pear - personally I think it’s horrible but others may like it. Hope it helps a little!

i love tpa honeydew the original and sweet guava cap , Fa forest fruit and the FA white peach has been working well

Hadn’t thought about Kiwi and Honeydew, I’ve seen a few recipes with them that sounded good.

I’m a little leery of trying sweet raspberry since I’ve had no success with the raspberry flavor, but I like forest fruit which I think has a raspberry-ish flavoring to it.

Now I’m wondering about cantaloupe, mango, papaya…finding some good sounding recipes with them it. I have a budget of $75 to spend on flavors, after restocking of current flavors, I have $58 left to spend on new flavors.

I prefer LA banana cream over TFA. I’d def pick up some watermelons, I got almost all of em and really don’t have a favorite but for a candy watermelon I like flavorwest and if I had to choose LA watermelons over TFA. TFA pineapple is also nice to have. . Flavorwest lemonade, and a couple different strawberries. I see u added cantaloupe to the list,def good choice.

Now I need to:
1 update flavor stash
2 enter the

Bull City Vapor is awesome. Already shipped and tracking has begun; shipper has picked up the package. This will be me on Monday: 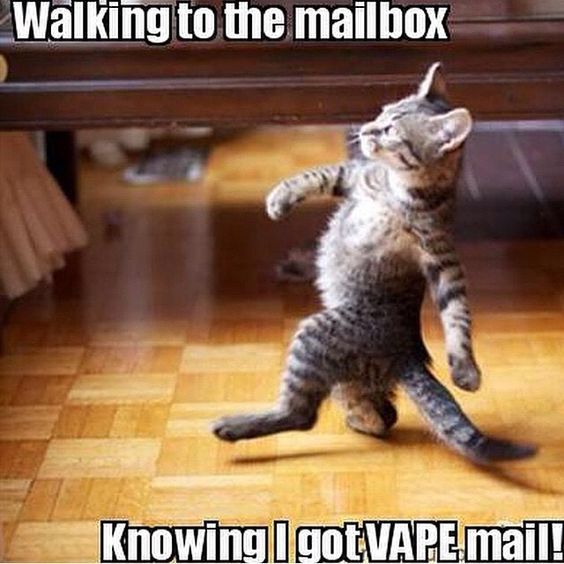 Try mixing some of your fruit flavors with Cucumber TPA, it will give them a more interesting flavor, a slightly cooler flavor and taste.
See my Cucumber Pear Mohito http://tjek.nu/r/7zkD
I also have a Cucumber Mint Mohito as well, http://tjek.nu/r/7yRZ

Just wanted to follow up and say I am so happy that I’ve expanded into fruit flavors other than the berries. Never thought I would like cantaloupe, mango, papaya, honeydew, kiwi, etc., flavored juices. So far, all the recipes I’ve tried are winners. Its only been a couple months since I got them, and I already need to restock those flavors!

have you worked with guava yet ??? if not id go for caps sweet guava but its a very good fruit to work with

I have Guava (FA) and so far I haven’t had much luck it. With the additional fruit flavors I now have, I’m finding a few more recipes I can try. Hopefully my luck will change.

I use TPA Cantaloupe, Mango, and Honeydew very often. Can’t wait to try out Papaya, it’s coming my way now. If I might suggest another couple of flavors to branch out into, I really like Watermelon Candy (TPA) and the original Watermelon (TPA). (I like the Candy version more.) It really harmonizes with the Cantaloupe and Honeydew into a delicious melon-y blend I use as my ADV. Marshmallow (TPA) is an optional flavor that also harmonizes well with these melon flavors.
My ADV, Melon Baller: http://tjek.nu/r/aTyz

Fuji FA is a must have in my book. I love tart apples like Fuji and Granny Smiths (Red Delicious apples are so damn boring), so when I saw the great reviews for Fuji FA I jumped on that train and haven’t disembarked. Such a good tart apple flavor.

Dragonfruit TFA is another one in my arsenal I consider pretty important.

Other favorites of mine:

I know Cactus INW isn’t exactly a fruit, but it has a fantastic taste and can be mixed well with other fruits.

Have a mix that has Forrest Fruit FA, Strawberry TFA, Raspberry Sweet TFA, and Vanilla Bean Ice Cream TFA, and a mix of Kiwi FW, Strawberry Ripe TFA, Dragonfruit TFA, VBIC, and other creams that is so far pretty good from preliminary testing. But we’ll see.

I also have a bottle of Blackcurrant (FA) that I’m not sure what to do with yet, but I’ve heard it’s good.

IMO Banana Cream TFA is sorta “meh” for me. Too much of a banana Runts flavor for me. Maybe it just needs more help than I’ve been giving it, idk, but I’ve only found one recipe that I’m sort of so-so on.

Two fruits I did not like are Pineapple TFA and Sweet Guava CAP. They weren’t gross or anything. The recipes I mixed up with them were vapable, I guuuueeesss… but surely there must be something better, right? Anyway, those are two fruits that definitely won’t be repurchased.

I like and use both, but I usually use Honeydew II these days. Honeydew is a fine substitute in that recipe for Honeydew II though. Experiment with it

thats too bad the cap sweet guava is one of my top five fruits i absolutely love it and out of the 5 other guavas ive purchased the cap is the best imo what recipes did you try this with ???

I tried a recipe on here, don’t remember which one, but it had Sweet Guava, CAP NY Cheesecake, and CAP VBIC, among a couple of other things. Then added some to @Alisa’s Custardstone at a couple different percentages. Mixing it with Alisa’s stone was definitely better than the other recipe, but still sorta meh and I like Alisa’s stone plain or with Fuji.

sweet guava ime works best with creams not custards , creams like vienna, fresh , sweet , whipped not to great with custards , cheesecake or bavarian , fruits it works well with peach , papaya , orange , sweet tangerine, strawberry , DF, etc i have a recipe grangers guava and a gravel pit remix that it works great in but your right about the custard and cheesecake not a good fit for guava at least not sweet guava