After various recipes, I have noticed a consistency in my mixes. Whenever I use FW Lemonade, oils can be seen sitting on the top of the mix. This is after a VERY thorough mix as well as steep. I noticed this long ago when I first got FW Lemonade (Natural) but figured I just got an odd batch.

Now, about a year later, I ordered the flavor again and have noticed the same issue. I have eliminated other ingredients to make sure it is not something else, but I can say with certainty now, that FW Natural Lemonade does have oils in it that cause separation. Will be pursuing other lemonades/ lemons and have plenty of others to work with anyway, I just thought it was interesting, I haven’t had this issue since I found it happening with INW Lemon Cake. It is probably due to the fact that it is one of their natural flavors.

Whenever I use FW Lemonade, oils can be seen sitting on the top of the mix.

but I can say with certainty now, that FW Natural Lemonade does have oils in it that cause separation.

This (to me) is a pretty bold claim. And I wouldn’t recommend making such a statement unless you’ve found significant proof to back it up. But that’s just me.

As most who’ve done their homework know, oils are among the “strongly NOT RECOMMENDED” flavoring traits (even more so than diacetyl).

While I have read that this is a flavor that can be prone to separation…that doesn’t necessarily translate to oils. I’m not saying you’re wrong here either…just recommending caution, as terminology is very important in certain areas!

Anyways, I see no warning notes on the ELR flavor page about this being an “at-risk” flavor in any way. And I know @daath looks out for the community at every turn with regard to such. Granted, he’s only one man (to handle the lot) and human to boot, I strongly doubt he’s made a mistake in this case.

If you pull up the MSDS on this one,


you will find it states:

And we know that oil is not water soluble.

Though, I did notice that user “Quakas” has in their notes that:

But has no source listed where that info originated.
Given such, I’m inclined to trust what daath listed, especially given it clearly provides the source data (MSDS).

As far as separation goes though, treat it like FA Cocoa or any other flavor that’s prone to separating. Shake the stuffing out of it before you mix with it, and before you vape it.

Paper bag test. Put a few drops on a paper bag, wipe off excess, let it evaporate. If it leaves a noticeable, translucent mark, it has oil [edit: lipids, not necessarily “oil”].

I’ll just throw this out there too, something you can research more if you want to, @Pentine. Not all “oils” have lipids. Lipids in vaping, from what I understand, are where the cause for concern is.

There seems to be a lot of misinformation about vaping essential "oils." I am no scientist, but have done some research. Essential "oils" are...

Here’s a pretty good little blurp about essential oils. The lemon flavor that’s pressed from the rind is the lemon essential oil. So I assume the stuff that separates in the lemonade flavor is that.

The lemon flavor that’s pressed from the rind is the lemon essential oil. So the stuff that separates in the lemonade flavor is that.

This is where my caution above, and reservations (as far as my individual commenting with any certainty) arise.

Given there’s so many ways to refine or process an item to yield a flavor (each one producing different by-products/side traits), I’m really hesitant to make such a statement.

If one approach is used, those oils never entered the equation in the first place.

If another is used, they could have entered, but then removed in a latter portion of the processing.

If yet another method of processing is used, then they may well remain in the final product.

Not knowing exactly what’s going on at FW (or LorAnn, or effectively anyone but TFA) is part of why we have to rely on things like the MSDS/SDS and charts like the one here:
http://bestvaporflavors.com/best-lorann-oils-vaping/
for LA. Sadly, we don’t yet have such for FW (or anyone else). But given that LA was one of the “largest offenders” for using oils, I’m not surprised that a list was created specifically for them. However, I it is worth reminding newcomers that they’ve long been a FOOD FLAVORING company first and foremost, and using certain flavors of theirs only came to light, as an afterthought and by necessity!

I personally feel that any unsubstantiated assertions (in arenas so important as this) only leave “sticks to be gathered” as fuel to the fire (or potential misuse) for those opposed to vaping.
So from that aspect, I support some regulation of the industry that’s being proposed (including by those within the industry) as it should be in the best interests for everyone involved to have a clearer understanding of what is and isn’t allowed to be a material component in the total package that is “Eliquid” from a health and safety standard.

I’m trying to remain cautious, as well as informed, but at the same time trying to not feed the forces that oppose us. As we all know, vaping works where nothing else has (in regards to quitting smoking). But we still need facts to combat the enemies of vaping, now more than ever. And that’s the mindset of where I’m coming from in all of this.
Nothing more.

Hopefully y’all get what I’m trying to say.

VapeyMama:
The lemon flavor that’s pressed from the rind is the lemon essential oil. So the stuff that separates in the lemonade flavor is that.

This is where my caution above, and reservations (as far as my individual commenting with any certainty) arise

Yeah, I should have made it clear that that was an assumption of mine and not a cold hard fact. I edited.

I also have oil from using same lemonade from fw. It’s not just you.

No worries.
Honestly, we already know that less than honest/responsible media will twist anything they find to suit their particular slant. And given that runs so prevalent these days, sometimes I don’t know why I bother… I guess it’s just not my nature to be apathetic, no matter the odds. Lol
I feel compelled to still try and fight them…

I understand where you are coming from in not slinging such brash statements, especially with how legislation or the media can misuse this information. I thought I had emailed FW about it but cant find it at the moment, so I will email them again to make sure of what I am saying.

Don’t mean to startle anyone, just thought it was interesting, as it is different than some such as FA Mandarin/ Blood Orange where separation can be seen and a good shake will fix it, whereas this is residual substance, actually sitting on the top and bubbling in one place.

@JoJo
I tried the water test, and I even tried to put some on a frying pan on my stove to see if there was anything left after it burned off, but I have not heard of the paper bag test. Will have to give that a try.

@VapeyMama
Lipids! Thank you, I had read something where not all oils were unsafe, but I could not remember for the life of me what the demarcation was between them. Thanks for the link

@TaKeMyVaPe
Is yours the Natural version? Honestly, the natural is the only version I could find (at BCF).

Here’s some pics of how it looks when all is said and done. Spot on left top is Inawera Creme Brulee, on right top was Real Flavors VG Coconut Cream Pie, and on left just under the creme brulee was a water spot. 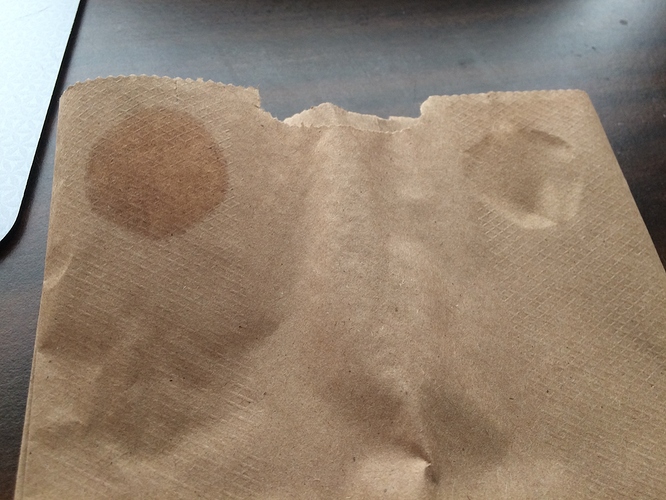 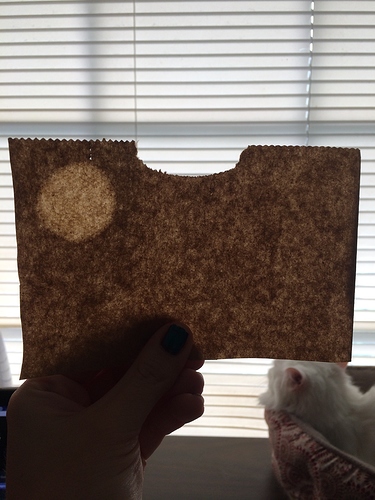 Perfect, now when I get around to actually testing it like a good scientist, I will actually know exactly what to look for, thank you for this.

LMAO! The cat in the background is killing me! That lounging bastard, I love it.

That’s my fur baby Luna. That’s where she spends most of the day cuz she’s gotta be wherever I am.