I received the GeekVape Blitzen RTA free of charge from www.2fdeal.com for the purpose of this review. It is available for sale here with free shipping.

Smooth side airflow blows directly to the coils to provide full flavor.
Large airflow comes from the side directly in a shortest path to provide maximum vapor production.
Build deck is built into the base for convenient access.
18mm postless build deck allows easy coil building and supports both single and dual coil build.
Bubble glass included to provide 5ml juice capacity expansion.

Available in a variety of colors:

Getting to know the Blitzen

Comes in 2ml mode to comply with TPD standards and I personally think it looks sharp. I am considering getting the black or gunmetal to match my Lost Vape Paranormal. The drip tip used in the pic below is my own to match, it is not included. 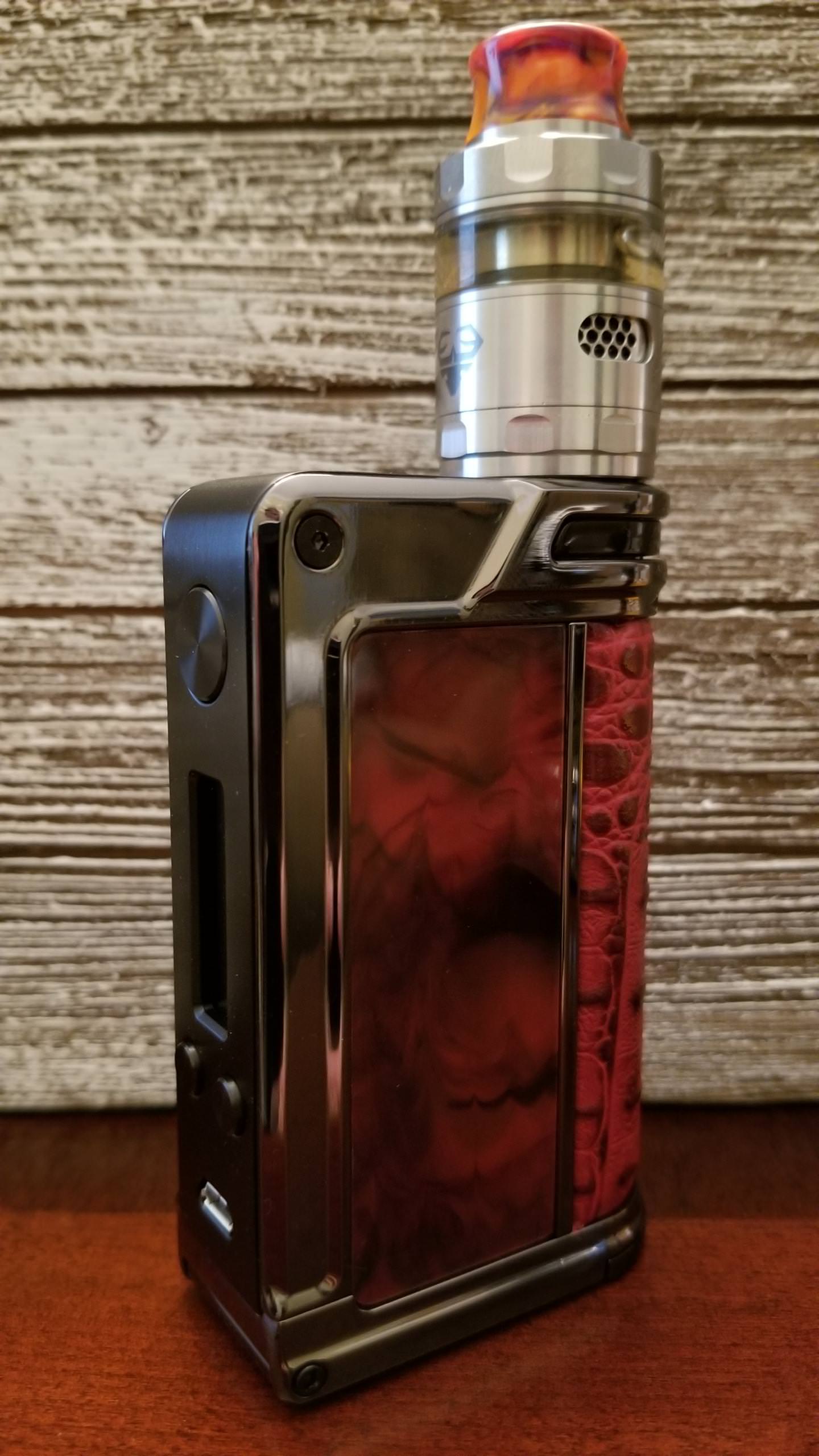 Comes with a chimney extension and bubble glass to extend the juice capacity to 5ml. 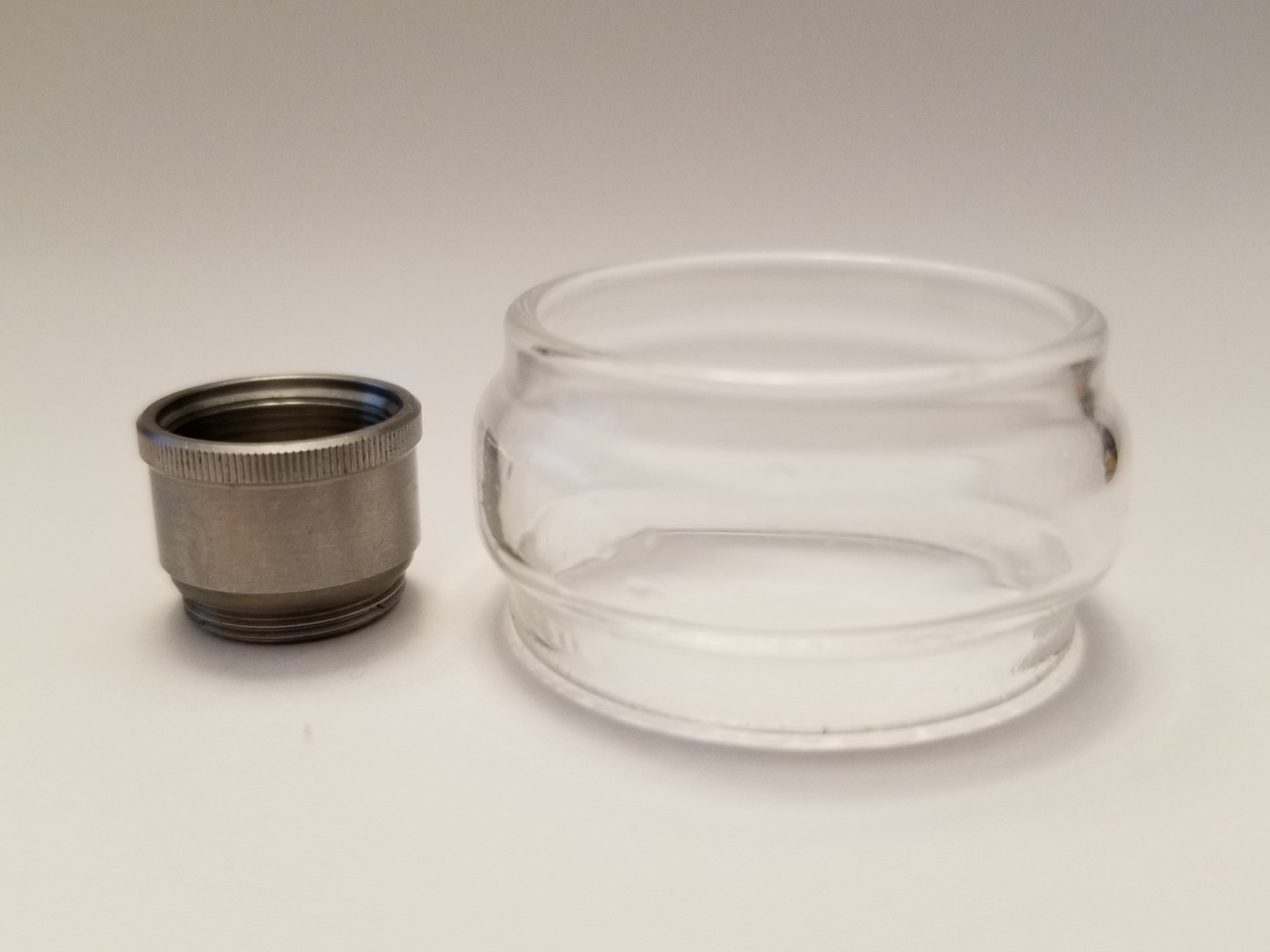 Not as crazy about the looks in 5ml mode as shown here on my Smoant Battlestar with the orange resin drip tip that is included. 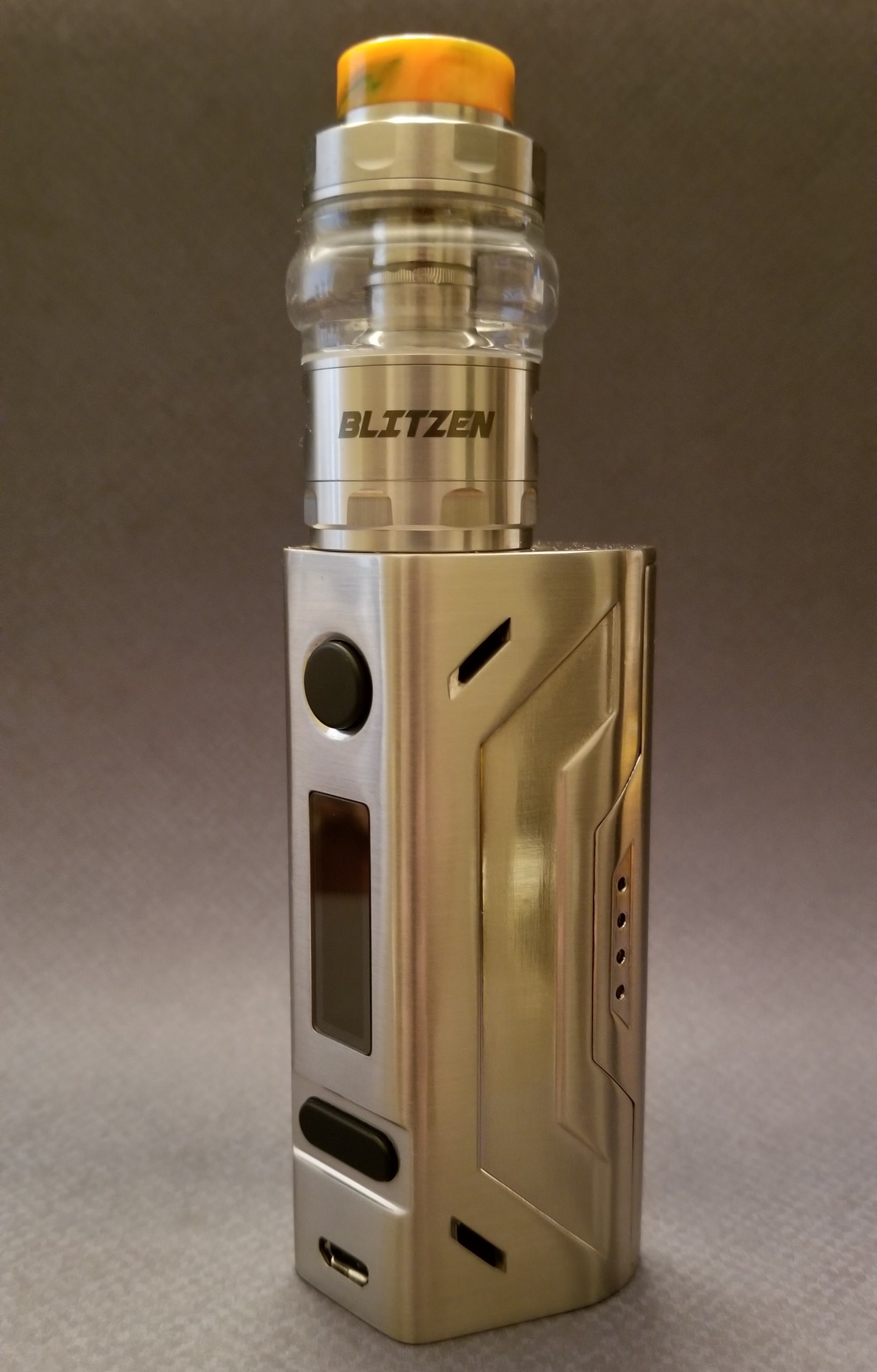 They include an odd and thin clear 810 drip tip as well, not crazy about it as shown on the Asvape Strider mod. 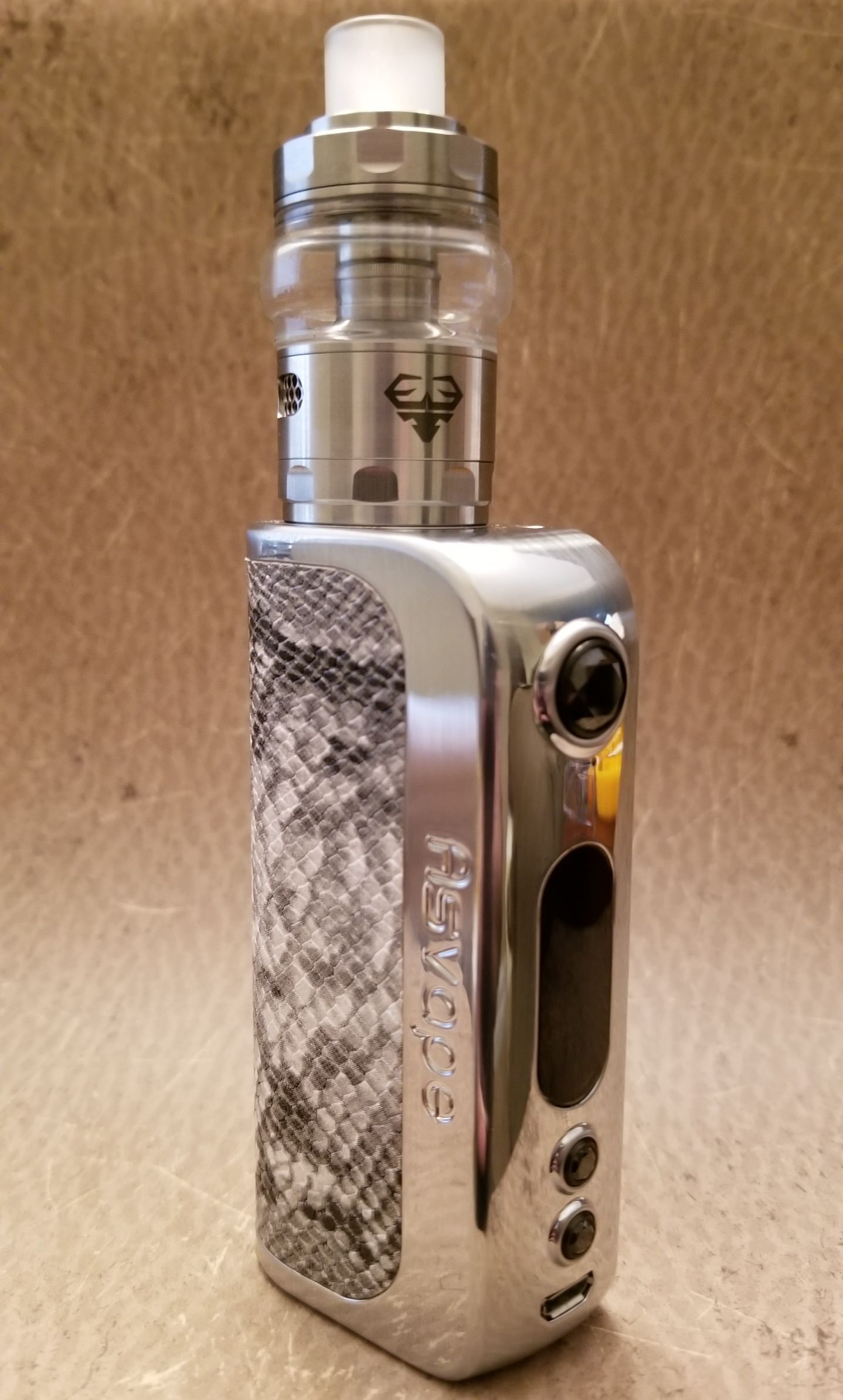 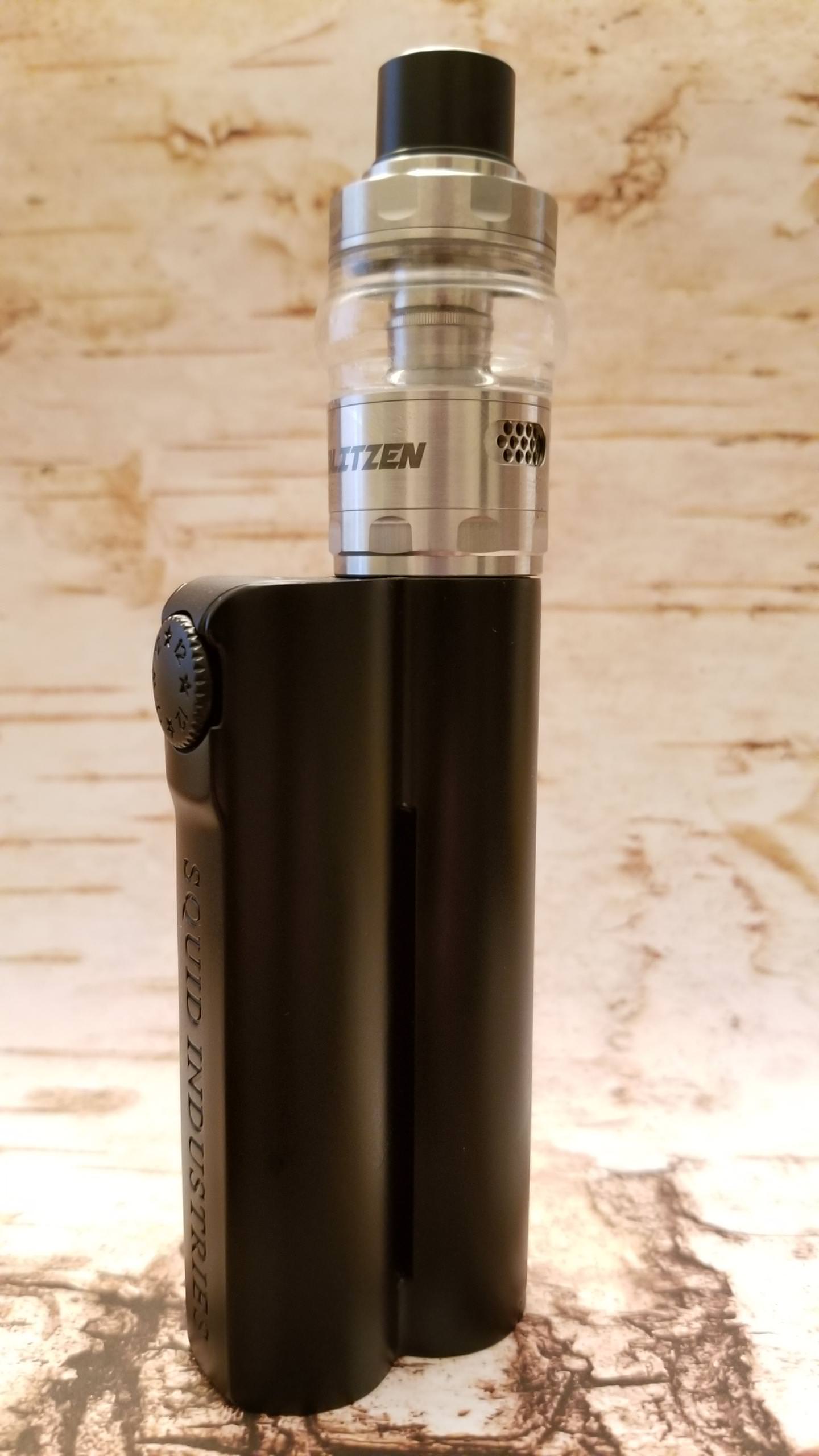 Geekvape never shorts you on accessories, just looks at how many o’rings you get and there are difference colors if you want to get fancy. They also include 4 extra slot grub screws, some allen grub screws would have been nice but they have held up well after several builds. 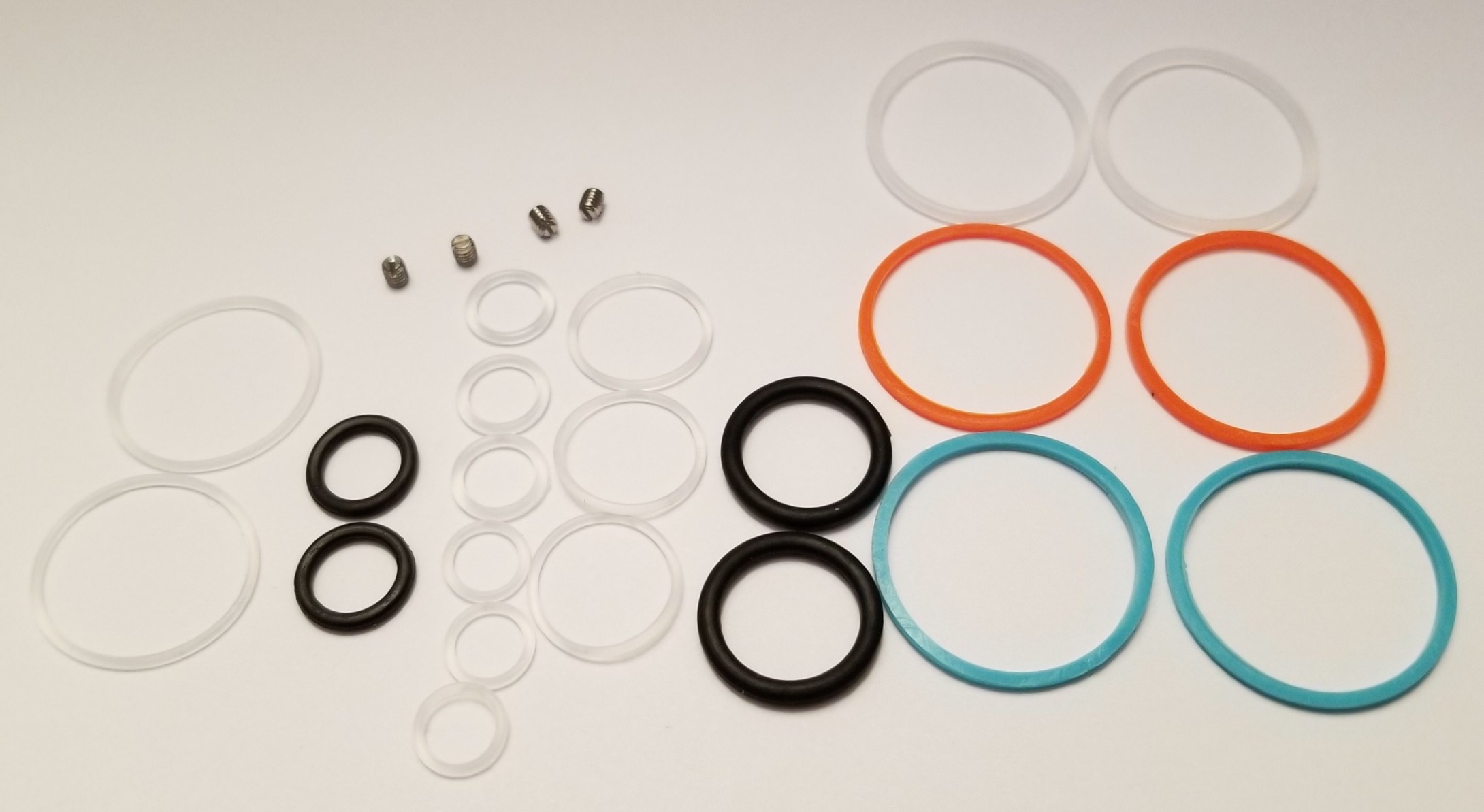 A chimney key is included should you want to take apart the tank to clean or switch from 2ml to 5ml. Since the top is really thin it is difficult if not impossible to remove without the chimney key. Really smart of them to include this. 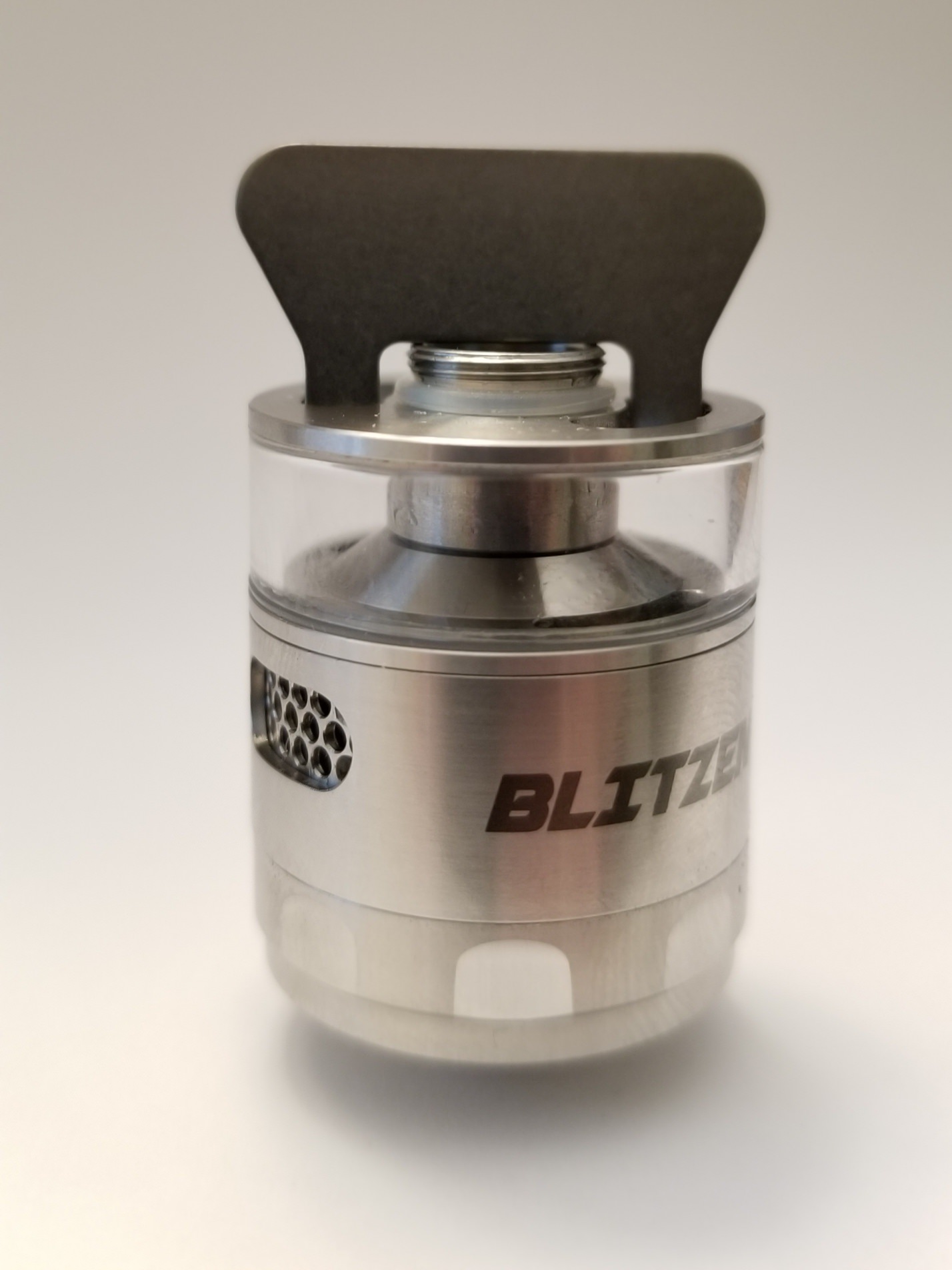 Big kidney shaped fill holes which makes filling her up nice and easy. 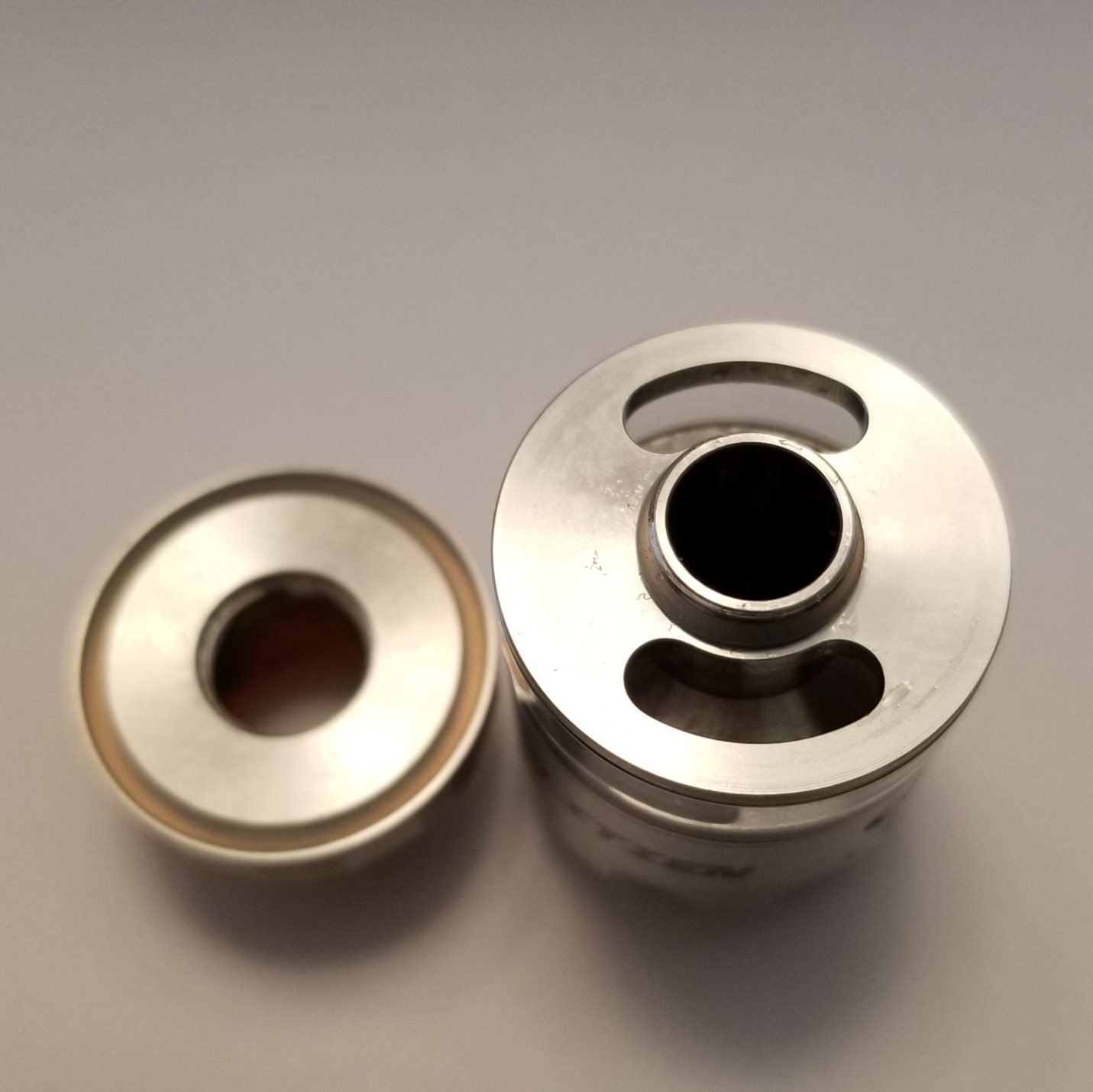 Accessing the deck can be a bit of a pain. The deck is designed to line up the coils with the air slots, much like the way it is done with the Aromamizer Supreme. The difference between the 2 is the Blitzen has the bottom cap permanently attached to the deck. With the Aromamizer I can access the deck easier, with the Blitzen I always had to grab a paper towel for grip on the bottom cap. It never loosened up even after removing it more than a dozen times.

You can actually get a little more than 2 and 5ml of juice in the Blitzen if you are patient and let the well fill up. I was able to squeeze almost 3ml and a little over 5ml as measured with a syringe.

The Blitzen comes with a postless deck, some people love them and others hate hate hate them. I fall in the love them category but understand how others might not like them. With a postless deck you do need to cut your leads prior to installing. I find that if using a coiling jig you can cut your leads at the end of the barrel for SS coil and a little bit more for kanthal and nichrome. The reason why SS coils are right at the barrel if they usually have some spring to them. Once installed you can stretch them off the deck, kanthal and nichrome usually won’t stretch as much.

I tried numerous builds in the Blitzen, probably 8 or more. Most were fancy wire parallel claptons but I did try a dual coil 26g single wire build. With the single wire build it is a little tricky to trap your leads, one of my leads got trapped on the side of the screw but still worked well. If your into smaller gauge single wire then this tank might give you headaches.

I am just going to focus on my 2 favorite builds, 1 dual coil and the other single, both SS316L fused claptons from advanced vape supply.

The triple core fused claptons from AVS are one of my favorite flavors builds, I prefer the 30g core with 38g wrap. Here I went with 6 wraps on a 3mm post and stretched the coils up. The nice thing about the deck is the way it is situated it wont twist your leads with wide builds. The bad thing is there pretty close so that limits how wide your build can be. 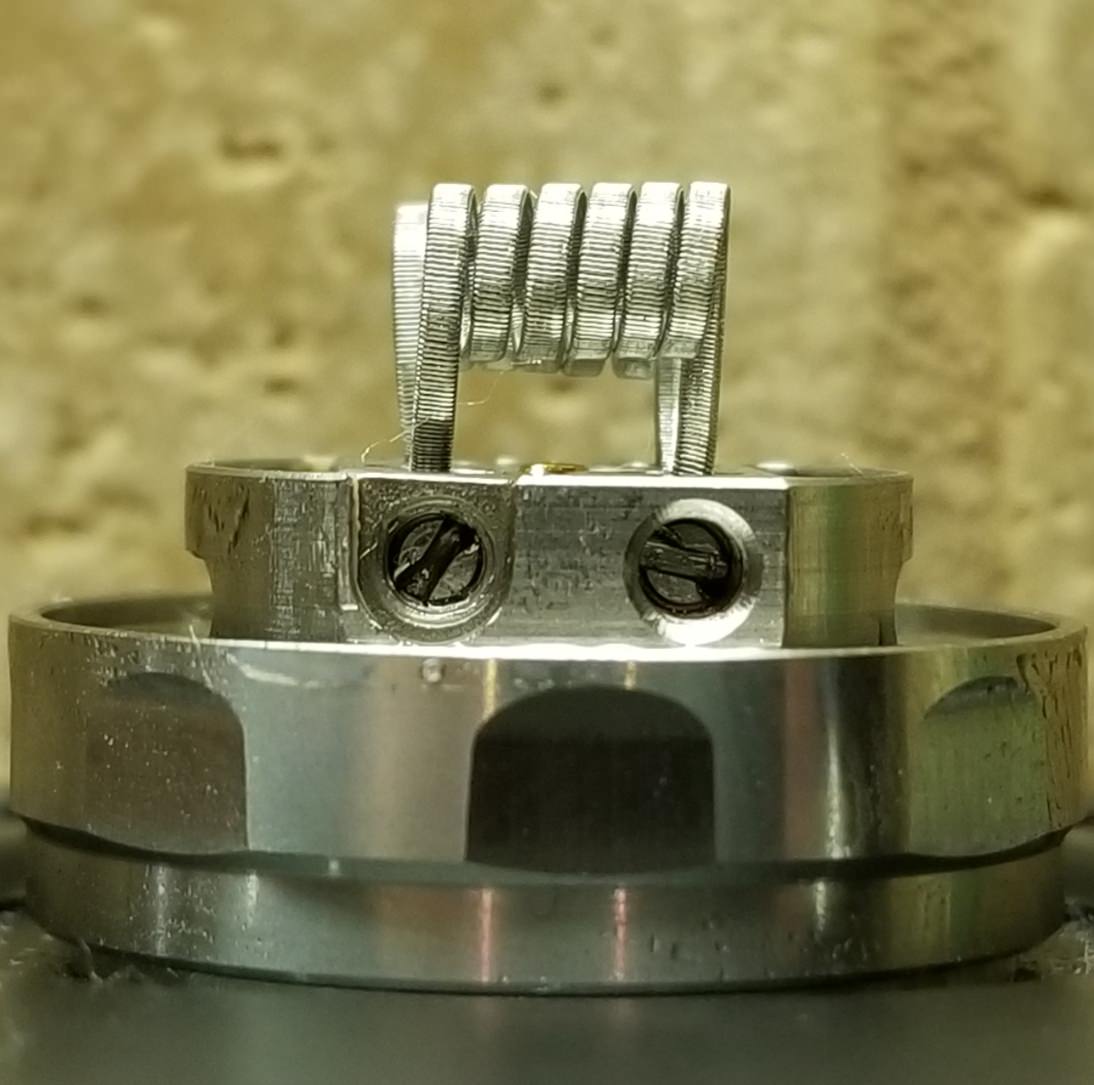 Now with that build I went back and lowered the coils just a little bit more. The reason why was because it was spity and lowering the coils alleviated that but still provided excellent flavor. I still wound up with a height where the coil was still a bit above the bottom of the airflow which is how I generally like it for flavor.

With that build I was getting excellent flavor and cloud production, some other builds not as much. With side airflow coil placement is critical, it is not as forgiving as bottom airflow so experimenting on what works for you is important for performance.

Tried a few single coil builds but wound up really liking it with quad core fused claptons from AVS, 5 wraps on a 4ml post. 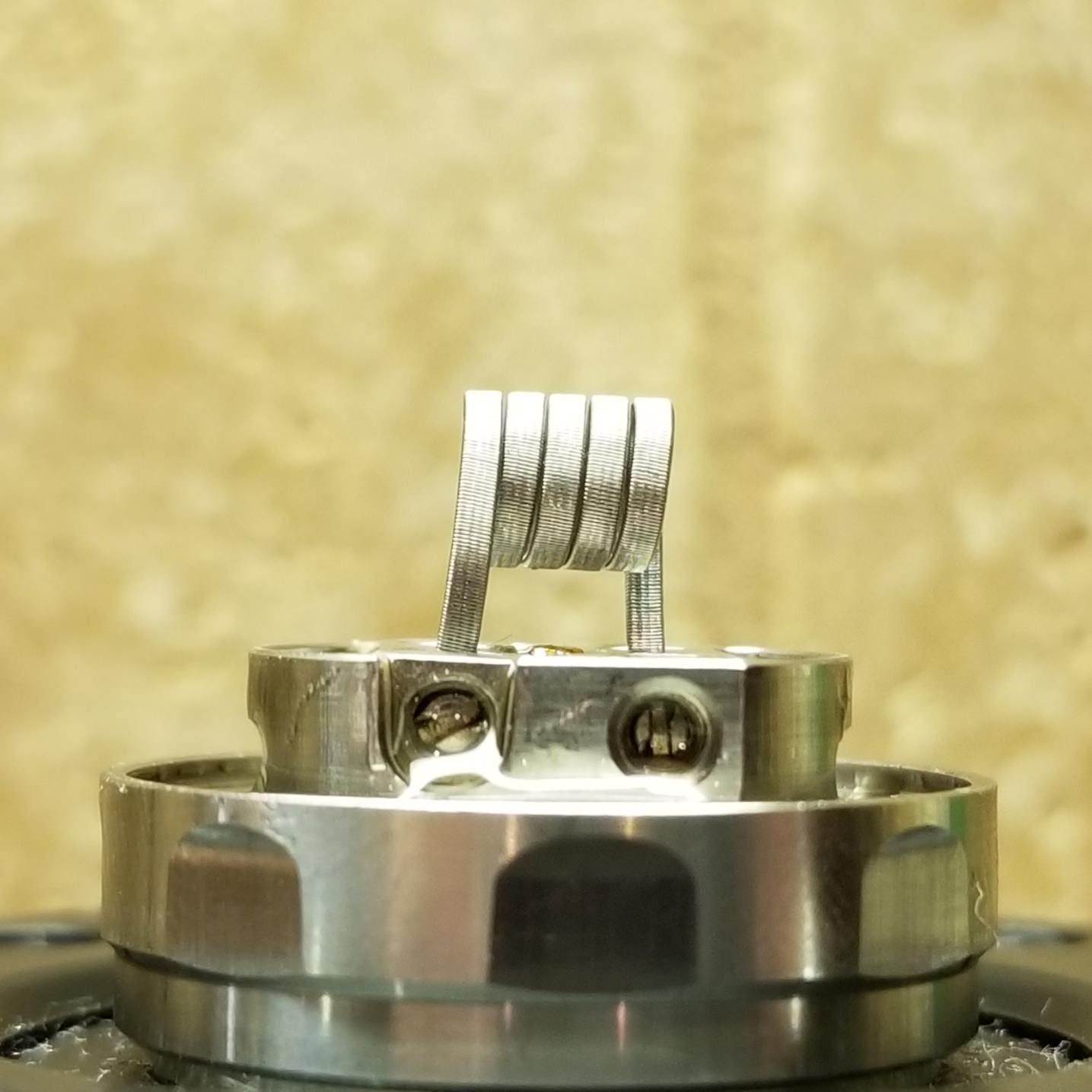 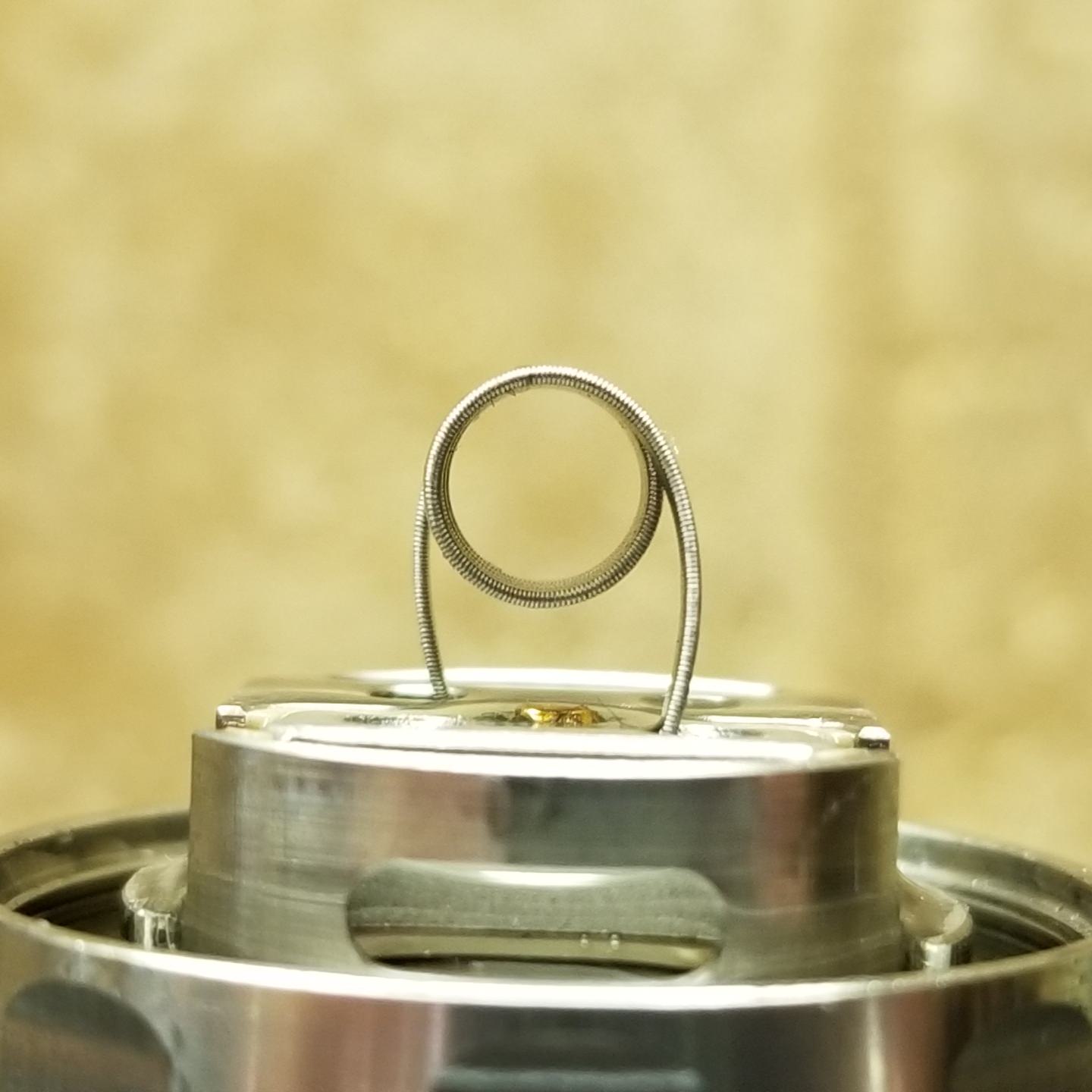 This build I wanted it as high as I could get it without shorting on the chimney so I could get the airflow under it as much as possible.

Flavor from the single coil was good but not as good as the dual coil setup I did above. The flavor is also a step behind many of the better single coil RTA’s on the market. While I did like it I would mainly use the Blitzen in dual coil mode, save the single coils for an RTA that is dedicated to that.

Wicking is easy with the big wicking slots provided. You don’t want to over stuff it though or you will get dry hits. Your wicks should cover the area but still be fluffy, not a brick of cotton. 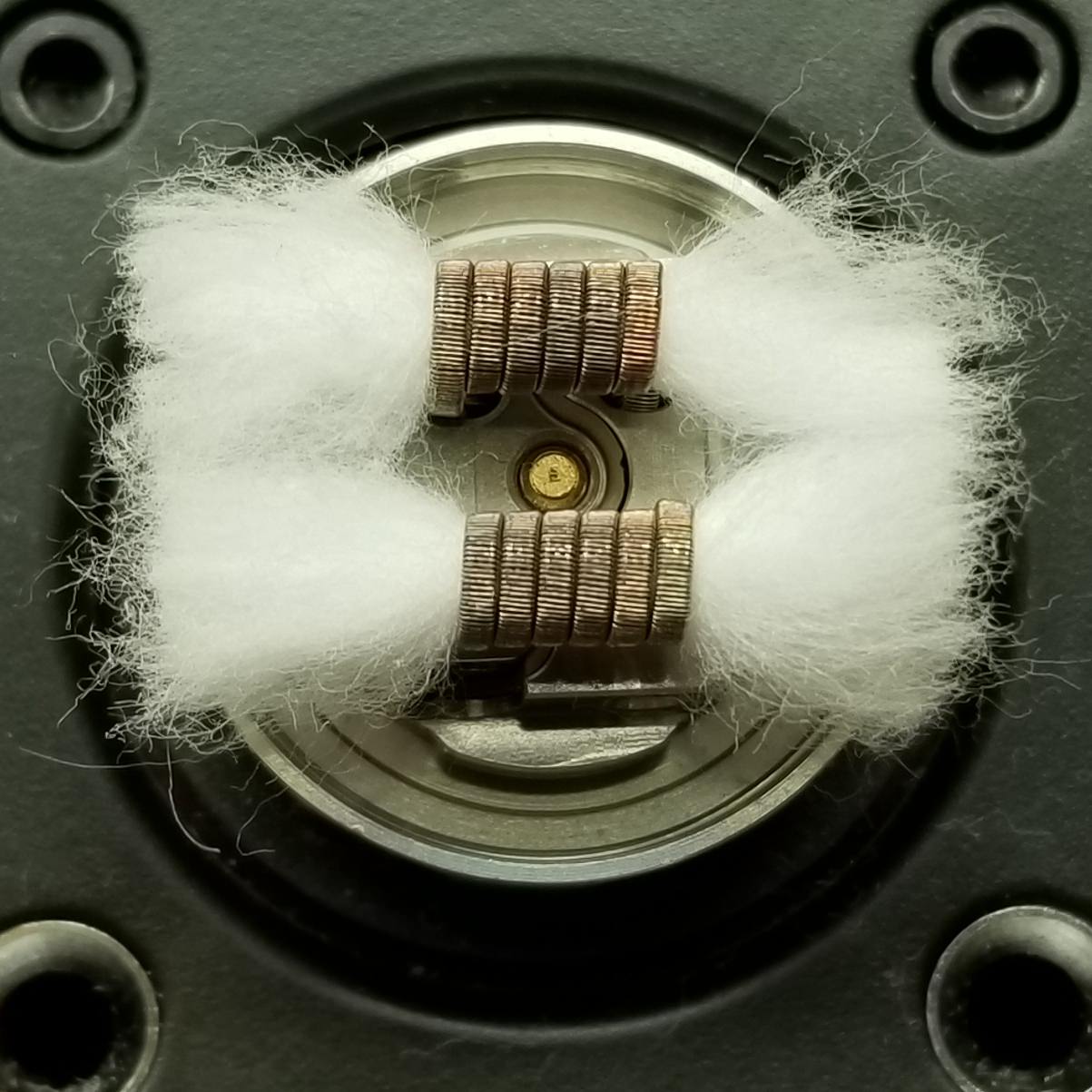 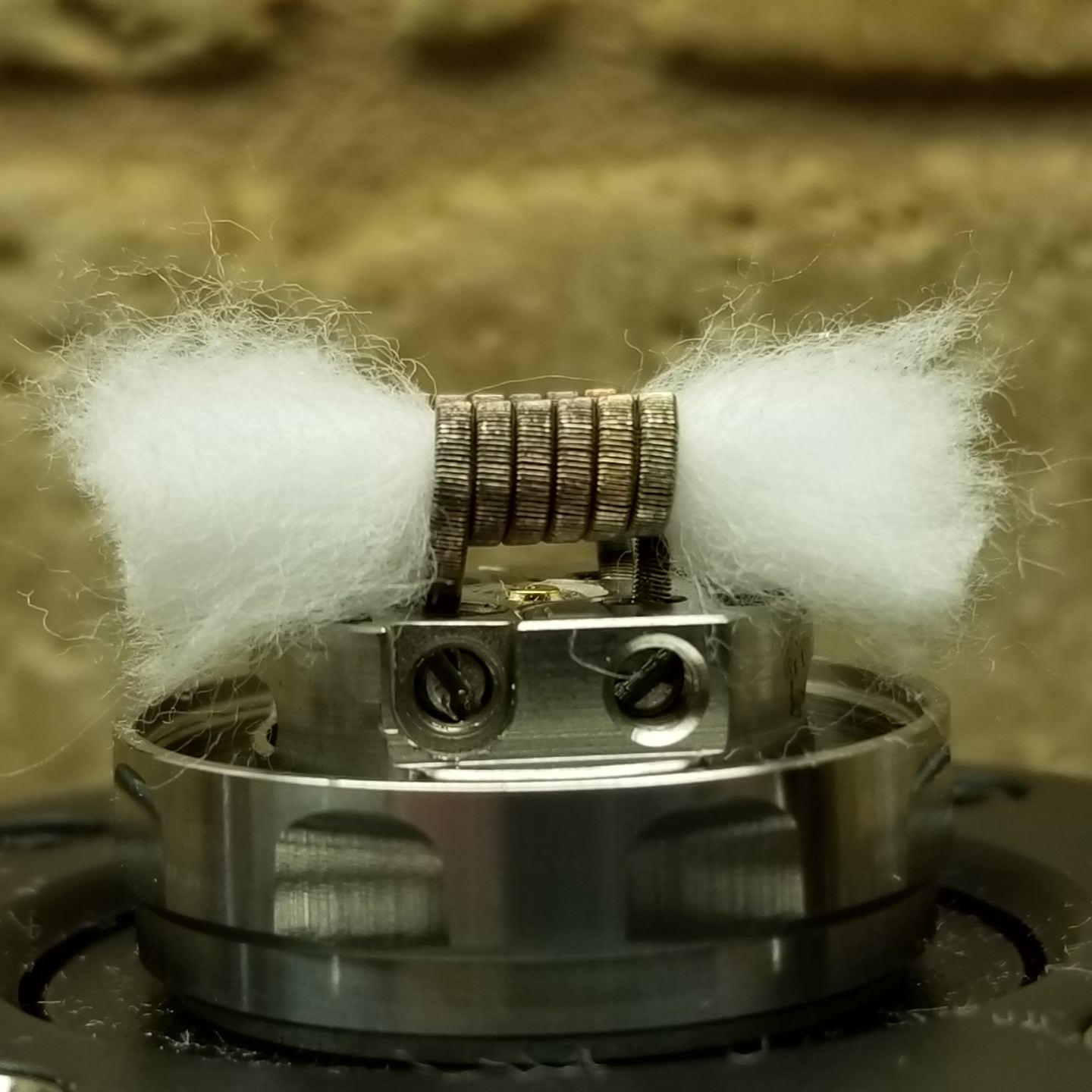 The wicks don’t have to go all the way to the bottom either. Best performance I got was with the wicks about halfway in the well. 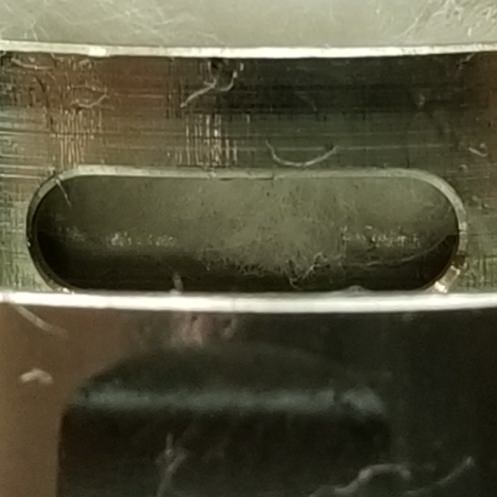 Overall the Blitzen is a performer and with the right build provides a lot of flavor and clouds. I do prefer it in 2ml mode, a little bit of flavor is lost in in 5ml mode, not a dramatic loss but noticeable.

You may have noticed in some of my build pics that the slotted grub screws looking a little gnarled. They look that way but have held up nicely, Geekvape in the past has always included very good grub screws and these are just that. It would have been nice if they included allen grub screws for the extras though, instead you get the same slotted as spares.

With the honeycomb airflow it did remind me of my Aromamizer Supreme V2 so I decided to throw the same build into both. Since the Vandy Vape Kensei uses a bottom airflow honeycomb design why not add it to the mix as well? The same juice was used in all 3. 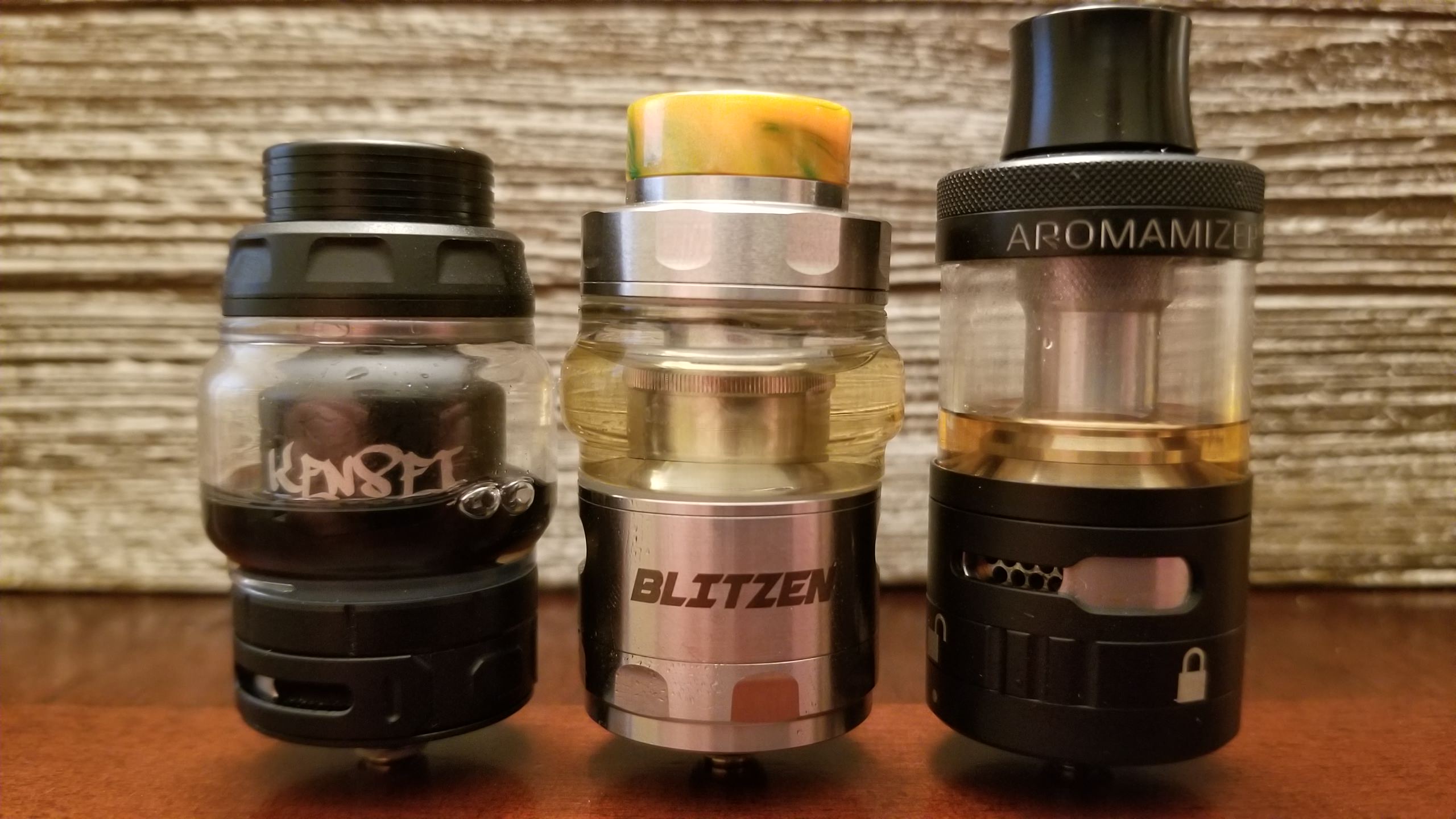 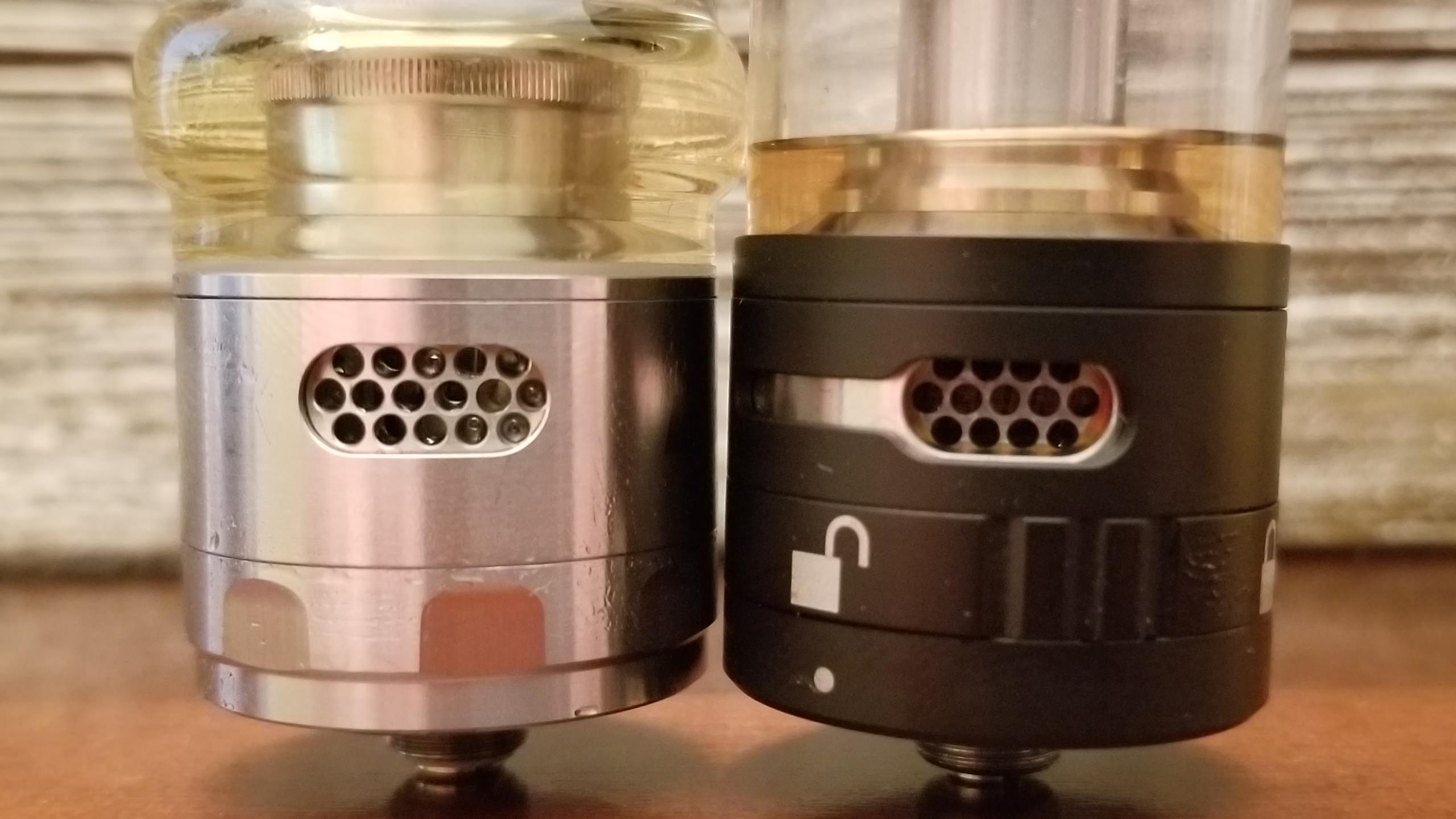 Now this proved to be interesting. The Aromamizer and Blitzen were pretty close to even, sometimes I preferred one over the other. The Kensei on the other hand was a bit of a flavor bump, it was noticeable.

I had the Blitzen in 5ml mode for this test so when I went to rebuild I placed the same build again in the Blitzen, this time in 2ml mode and the Kensei. Now the Blitzen closed the gap, in fact it was a little more flavorful but a wetter vape, gave me sugar lips. The wet vape does come from the AVS triple fused clapton, I can build for a dryer vape but then it is not as tasty for me.

In 2ml mode the Blitzen is right up there with the other 2 tanks, maybe even a notch above. It also has the smoothest airflow which is less noisier as well. The problem is in 2ml mode, even though I can squeeze almost 3ml in it, you will be filling up often. It performs well in 5ml mode but there is just a slight drop in flavor…looks nicer in 2ml mode as well IMO.

Of the 3 I would go with the Kensei only for the fact that it matches the flavor of the Blitzen but with the bubble glass it holds a lot more juice. During the comparison between the 2 I had to fill up the Blitzen 3 times compared to once for the Kensei.

I am a little torn with the Blitzen, it provides excellent flavor in 2ml mode but wow do I have to fill it often, 3 times just while writing this review. The 5ml mode helps but then I am not as pleased with the flavor and miss the 2ml mode and go back to that. I think the 5ml mode looks dumb as well, I am not opposed to bubble glass but the Blitzen just looks odd to me in 5ml mode. The looks are just subjective though, you may very well like it and I hope my pics help you decide.

If the Blitzen intrigues you then you won’t be disappointed, it is a fine tank that I will continue to use in 2ml mode. I didn’t get great results with all builds though so keep that in mind, it is not as forgiving as some RTA’s out there.

I want to thank www.2fdeal.com for sending me the GeekVape Blitzen RTA for review. Looks like they have all the colors in stock and ready to ship for free within 24 hours: https://www.2fdeal.com/search/?Keyword=blitzen&CateId=

Also thank you for viewing my review, I try and be as thorough as possible to help my fellow vapers make an informed decision.

Excellent break down and review!

Thanks brother, appreciate it!

Good review. I’m glad you compared it to the Kensei, which I own. That said, there’s not enough of a difference between the two for me to jump on the Blitzen.
Thanx man!

The Kensei is a fine tank, so is the Blitzen. At this point someone would choose the Blitzen for the style and better airflow but aside from that there pretty even. I think at a certain point there is a law of diminishing returns, not like that stops the hardcore vaper though…lol

You do good work, keep it up. I’m still making up my mind just what RTA & RDA to get

Thank you, it really does mean a lot to hear people say that and all I want to do is help.

If you like postless decks then the Blitzen doesn’t disappoint. Wicking is easy on it but building is easier on the Kensei. As far as RDA’s the Drop does a lot of things right, not perfect but priced right and a great RDA. If you are looking for a single coil RDA I have really been impressed with the Ehpro Iguana but not sure when that will be released, I hope to have my review up soon of the whole kit. The Iguana shines as a squonk RDA though, not sure if your into squonking.

Let me know if you have any questions, I would be more than happy to share my experience.