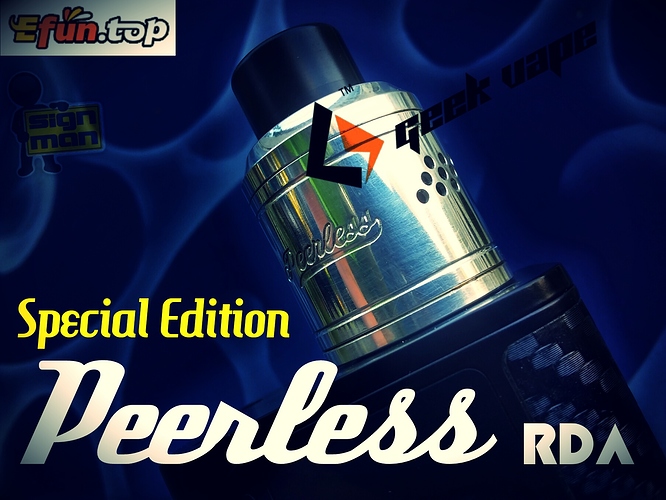 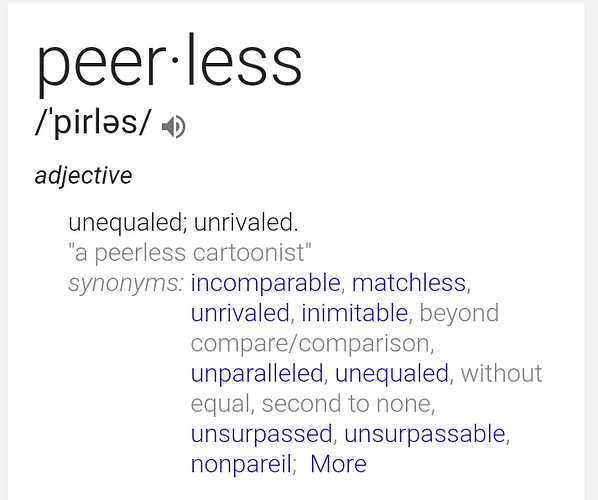 First thought…Very shiny. Every ounce of light available was reflecting off of the polished stainless surface. Geekvape released a “Special Edition” version of the Peerless RDA, and by looks alone, could win a beauty contest. Color options include silver, gold, stainless and black. I don’t have an original Peerless to compare with so this review is strictly based off of the SE and my experience with it…it’s a love hate relationship. Let’s check out the silver version of the Peerless Special Edition. 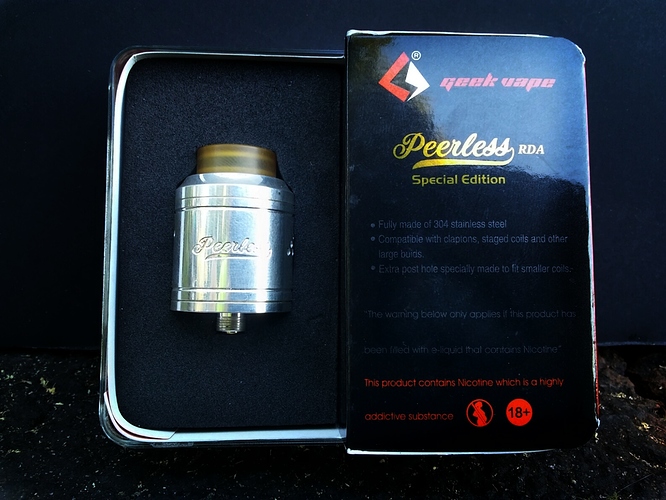 The SE comes nicely packaged in Geekvape’s standard cellophane sealed plastic shell with all the spare parts and extras tucked under a paper flap. Included are complete o-ring replacements, tri-tool, 2 grub screws and 2 of the weirdest grub screws I’ve ever seen. A squonk pin and spare Goon style 810 delrin drip tip are also included. This time around the proprietary acrylic top cap was scrapped and replaced with an ultem 810 tip. Both the delrin and ultem tips are nice…nothing mind blowing or unique. I wish they were about 2mm taller cause it’s hard to keep your lips from touching the top cap. Luckily I haven’t had it get hot on me. All the pieces are beefy and thick giving it substantial weight for it’s size. I clocked mine in at 51 grams fully built and wicked. To put that into perspective, the Merlin Mini with a full tank weighs 47.5 grams and the OBS Engine with a full tank is 60.5 grams. I thought that was pretty neat. 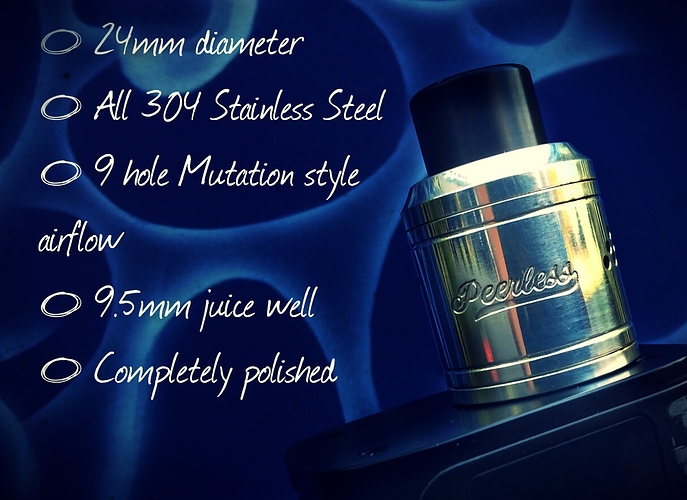 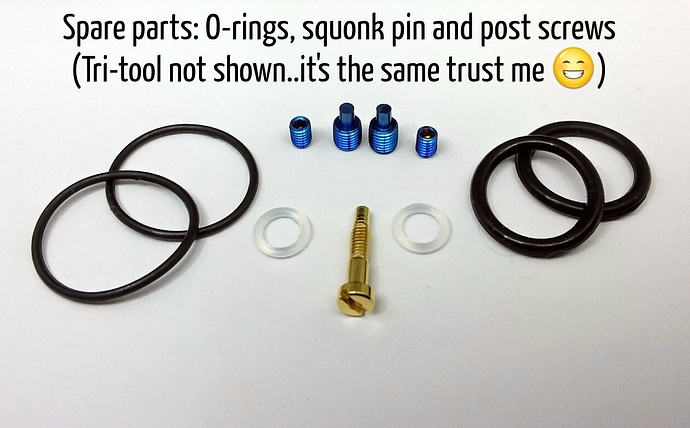 Moving on, the top cap is held tightly in place to the barrel section with a single o-ring. The base holds the barrel section in place with 2 o-rings. Pretty standard stuff here folks… At least it should have been… More on this later. For now I’ll just state the fact. One thing I do love about this RDA is the Mutation style 9-hole airflow system. Air hits the coils at the top, center and bottom if properly placed. The draw is smooth and a touch restricted when set to full open, and of course gets tighter the more you adjust down. Aesthetically, this thing is top notch. It could be hanging out with a bunch of popular $60 RDA’s and blend right in. It also makes all of my silver mods look like shit lol. The machining was mostly well done. The threads are smooth, no burrs or rough edges in the deck, and the parts fit together almost seamlessly and extremely tight. The smooth finish gives you nothing to grab on to when adjusting the airflow or removing the barrel section. A little knurling would’ve made it better. Would it hurt the looks? Probably so. Sometimes you gotta sacrifice for the greater good. 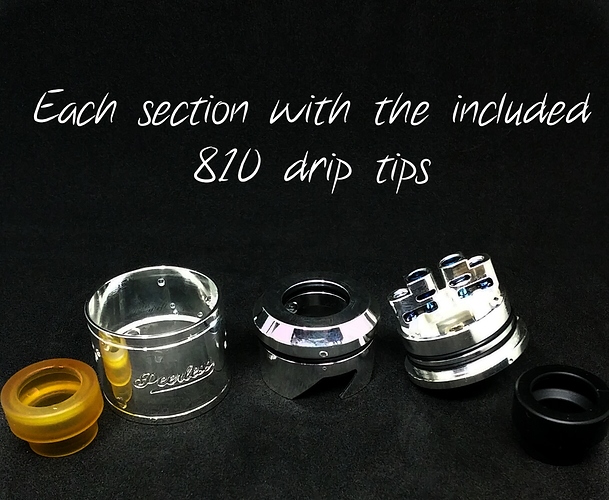 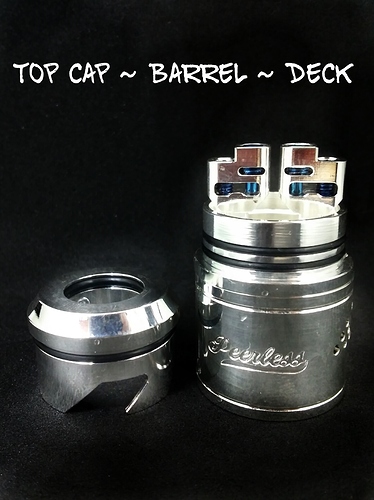 Nothing on the deck has changed from the first version. Same split post “bridge” design and heat treated titanium screws. I love how the blue screws really pop with the shimmering surface of the posts. You can see hints of blue light where the screws are reflecting off of the inside of the deck. Every square inch of the SE is polished including the juice well (all the way to the bottom) and the posts. Everything about the build deck has been said before so no need to go into great detail there. Small slots up top for small coils…big slots down low for chunky coils. The lower outside post slots leave little room for wicking which I can’t stand. I stuck a pair of 28g fused claptons in the top post holes and that worked perfectly. I made some aliens the second time around and mounted them the same way except I only used the bottom slots in the center. That was a little harder as you can imagine. Holding down 2 sets of wires stacked on top of each other while trying to pinch them under the tiny little nubs at the bottom of those center post screws was time consuming to say the least. The payoff was worth it though. I had ample amount of room for wick and the coils were aligned dead center. Once I got it going it was a delicious, saturated vape. 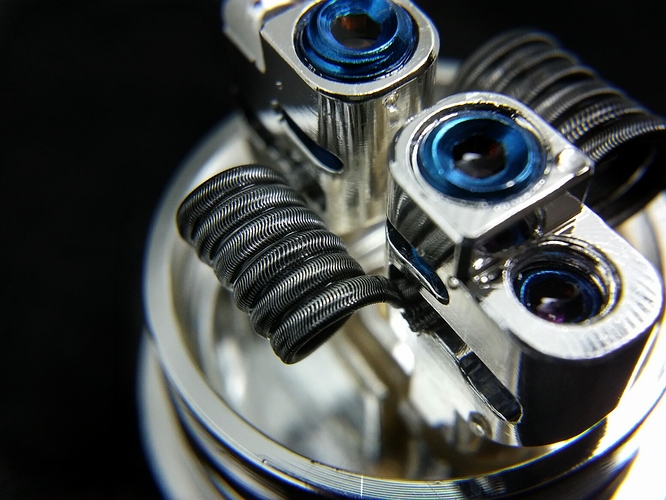 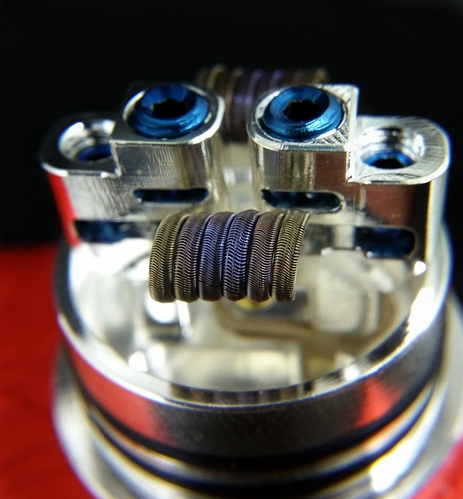 The performance I get out of the Peerless SE is fantastic. The flavor is on point. Vapor production for days. The airflow is tried and true. I’m not a huge fan of the deck but it works just fine. The lower post slots feel like they’re far down into the deck to me even though they’re not. It makes for a deep juice well though, 9.5mm deep to be exact, and this baby can hold some juice! Overdrippers rejoice! You really have to be trying to get it to leak. The part that ruined the whole thing for me was the o-rings. It’s funny how something small like that can cause so much headache. Right from the begining I couldn’t get any of the pieces apart. The top cap and barrel sections were stuck in place solid. I literally had to take a small screwdriver and pry my way into the seam to get it started, then use a larger screwdriver to finish getting it loose. I figured it was just dry and being stubborn. After a good cleaning, and the first build installed, I coated all the o-rings in VG and snapped them all back together. As soon as I tried to take it apart again…same problem. I then changed them all out with the included spares. I can forcefully adjust the airflow now but still have to break my teeth out trying to pull off the barrel. Like I said before, once I have it set up good where all I have to do is dump juice in the top it’s a great experience. Fighting the thing tooth and nail just to pull it apart is not. Had the fit and finish been a little better, this would be a much better RDA. It’s a catch 22. Love the vape…hate that I can’t take it apart easily.

Geekvape is one of my favorite companies. I’ve used most of their products and this is the first one that’s gave me trouble. I think they went a little overboard labeling it as the best RDA ever with a name like Peerless…but it does sound pretty cool. I’m not sure if the o-ring issue extends to all of the SE’s. Since the spare o-rings for the base didn’t fix the problem it could be a milling issue. Was this an isolated incident? Let me know in the comments! 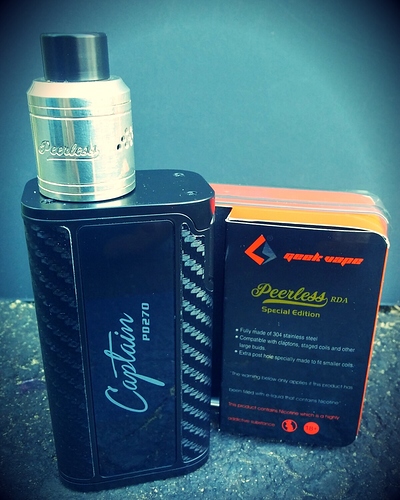 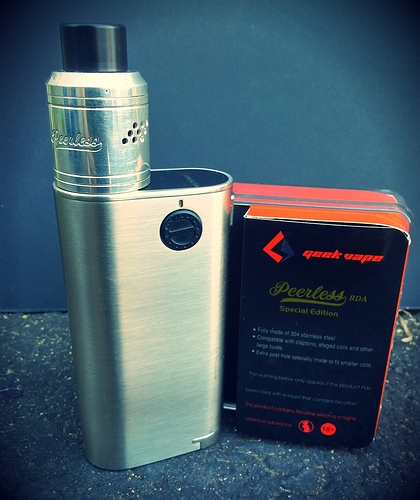 Thank you kindly for reading! You can pick one of these up for cheap at Efun.top here:
https://www.efun.top/24mm-geekvape-peerless-rda-special-edition.html

For less than $20 you can pick one up. It’s a damn good looking RDA and the price is right.

Also if you’re interested, Efun has the original Peerless on sale for $12.99 after log in. If you ever wanted one now’s your best chance!
https://www.efun.top/24mm-geekvape-peerless-rda-rebuildable-dripping-atomizer.html

You’re the man thank you brother

I don’t have the SE but I do have 3 of the originals. That polished SE is quite striking. Love the blue on polished SS look. I too have a love-hate relationship with the Peerless. For the same reasons. Great write-up!

So the original Peerless has the same o-ring issue? That’s insane that it would pass QC like that without solid testing first…Not good

Oh I also wanted to add that the drip tip shown in most of the pics is not the one that came with the atty. You can tell it’s not stock because it’s much taller and functional lol

Thank you I appreciate the read