Go state by state to be heard Florida here

First off if I am in violation of any form rules sorry and please delete if not I am considering posting this to the Senator’s Twitter page I’d love to have a few more signatures from Florida anybody can give input on this please feel free to join in I don’t write so good but I do not want to lose the ability to vape thank you , if we can get somebody from every state to start something like this just might get their attention and if it has a few thousand signatures linked to it be even better
Senator Marco Rubio
My name is Brian Bavington I am a white 58 year old registered voter in the state of Florida who is trying to make sure I can continue to use my e-cigarette over a regular cigarette as a safer alternative I made contact with you before but failed to leave my first and last name if need be I can probably get you another 20,000 first and last names in a heartbeat of registered voters for some reason it seems like the voice of the normally undereducated low income who use e-cigarettes is not gaining attention and not gaining traction in Washington I understand they have other things to do but at this time this is a very important issue with adults educated and uneducated wealthy and poor , not only in Florida but the whole United States never in recent history has there been a movement to get so many people off of cigarettes and onto an alternative is it safe I don’t know I darn sure know that smoking is not I have COPD I also used to have to use a breathing treatment everyday I no longer need to do that since I use my e-cigarette are e-cigarettes going to make my lungs better nope nothing that we have available now will the only thing to do is stay off of cigarettes I’m not the only one that has found e-cigarettes to work hundreds of thousands have unfortunately like our things they’ve also fallen into the hands of younger people teens I do not support that at all I’m asking you please take some time not change your mind just look in to it thank you Brian Bavington

Looks good send it. Maybe take dam out. They tend to stop reading when given any excuse.
Good luck we need it!

TN here, but if I can help, holler.

I write today to ask for your support of HR-2058, The Food and Drug Administration’s (FDA) Deeming Authority Clarification Act of 2015, sponsored by your colleague Rep. Tom Cole (R-OK), and the Cole/Bishop Amendment to the 2017 Agriculture Appropriations bill, as well as any other similar legislation which may come before the House/Senate.

Please indulge a few minutes of your precious time while I explain why I ask for your support of this important legislation.

The Federal Drug Administration (FDA), as you likely know, on May 5th, 2016, released their Final Rule regarding the Deeming of certain products in the marketplace as “Tobacco Products.” The 499 pages of this regulatory document includes items such as batteries, wires, electronic circuits, software, even cotton and similar textiles, and surreptitiously classifies them as a “tobacco product.” These items, which are clearly not tobacco products, are “deemed” and classified as such by the FDA, because they are components of Electronic Nicotine Delivery Systems (ENDS), as the FDA would call them.

Myself, along with millions of other Americans who are now, or becoming ex-smokers, have taken up “vaping;” the use of ENDS, or Advanced Personal Vaporizers (APVs) as we “vapers” would call them, as a safer alternative to smoking conventional, analog tobacco cigarettes. These devices provide users an OPTIONAL dose of nicotine by heating a solution to an aerosol which is then inhaled. It does not burn or combust whatsoever, and produces no smoke. The exhaled emission is basically a water vapor, not much different in composition than the “fog” produced by “fog” machines used for decades in movies, theater productions, and other similar events. In fact, APVs should be classified as recreational technology products, not tobacco products, as there is absolutely no tobacco in them whatsoever.

The ingredients in the solution (e-liquid) include the following; 1) propylene glycol (PG), which is a substance that is Generally Recognized as Safe (GRAS) for human consumption by the FDA, 2) vegetable glycerine (VG), which is also a substance that is GRAS by the FDA, 3) food-grade flavoring compounds, usually in a PG solution, or a PG and ethyl alcohol solution and 4) an OPTIONAL nicotine extract additive. That’s all, only four ingredients in most e-liquid currently on the market. The ingredients of cigarette smoke however, are well known to be harmful to public health and contain hundreds if not thousands of harmful substances. In fact, PG is commonly used as a vehicle for delivering other substances via inhalation, such as bronchodilators in asthma inhalers and carriers for certain vaccines/innoculations; while VG is a common, non-toxic component of soaps, cosmetics, suppositories, and other items.

The vaping community is not opposed to SENSIBLE regulation, such as codifying age restrictions for the purchase of these products. However, these sweeping regulations and onerous as well as prohibitively expensive Pre-Market Tobacco Application (PMTA) processes as outlined in these regulations, will ostensibly create a de-facto ban on all such products currently in the marketplace, stifle innovation in the creation of new and improved products, and kill a burgeoning $3.4B+/year industry which has created tens of thousands of jobs over the past several years.

While the economic impact due to the loss of local businesses and jobs will be significant, the more important issue is that public health will be greatly harmed by the inability of the vaping community to obtain goods and services to assist them with their continued journey of staying quit from tobacco cigarettes; not to mention those smokers who have not yet discovered vaping as a safer alternative to smoking who will be deprived of the latest generation of devices which have already helped millions of people world-wide.

I invite you to review research on vaping presented by Dr. Konstantinos Farsalinos, a cardiac surgeon in Greece (E-cigarette Research), as well as the recent report from Public Health England (https://www.gov.uk/government/uploa...mmissioned_by_Public_Health_England_FINAL.pdf). After reviewing the material above from the medical community, I also invite you to visit the testimonials page at CASAA.org (http://testimonials.casaa.org/testimonials/), where you can view thousands of stories from real people, like myself, speaking about how the use of Advanced Personal Vaporizers (APVs) has helped or is helping them “kick the habit,” and its overall positive impact on their health and well-being.

I also request that Congress undertake a Congressional Review of these new regulations, due to the economic impact of so many lost jobs because of the thousands of small businesses which will surely have to close their doors related to the excessive financial burdens of filing PMTAs to keep their product(s) on the market.

Allowing these draconian, tyrannical regulations to take effect will surely harm public health, and are tantamount to the FDA endorsing the MURDER of millions of smokers seeking a safer alternative to conventional tobacco cigarettes who will not have the chance once the regulations take effect.

Thank you for taking the time to read this letter, and I pray that you will make the correct and honorable decision regarding this important issue.

Love this letter. Mind if some of us who ain’t good at composing such excellent and professional letter writing use this for our letters? 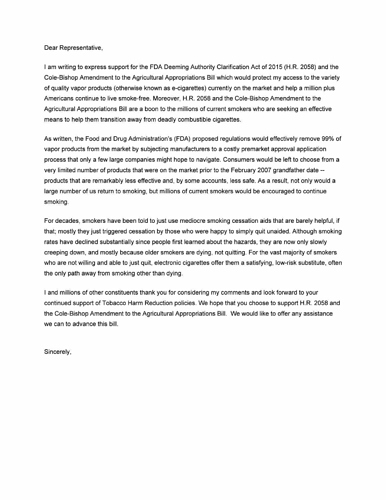 Where to mail it right here in Florida

Thank you i am quickly losing hope the B&M shop i stopped in at to day was routing ever one that came in straight to the counter sign your name print you address on a pre stamp , envelope then you were free to look around and purchase items too many complaining nor enough signatures it’s sad it’s like everyone is gearing up for a fight when me need signatures bad

Please, by all means, help yourself and use whatever you like.