First class international is the most cost effective if the contents weigh less than 4 pounds. First class is roughly $10-13 cheaper than priority. With shipping costs like that, I could afford to send you rare snail fungus to add to your panty dropper liquid. Speaking of which, how is that doing?

I sent some off to a friend of mine in Calif, I used An Post (Irish mail). Last time I checked the tracking it was somewhere around Mongolia

This one is obviously on it’s way to somewhere. At least it’s in the state. Amazingly, they do this about a third of the time, lol. 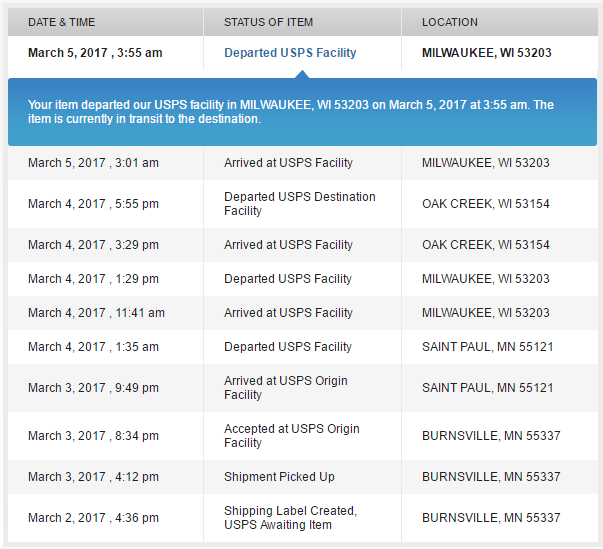 Since I’ve been doing the click & ship, everything sent recently has been up to par. It might have something to do with the barcode printed on the label but not for sure. Seems this way there is a lot less room for errors in the automated sorting because the address is easily readable plus the barcode is easily scan able and we don’t have to read people’s terrible handwriting with the wrong zip code

I bet I was guilty of that back in the day when people still did hand written letters not text and email.

Back in the day seems like it’s back in full force. Unbelievable amount of handwritten letters still. Actually is nicer to receive a letter in the mail box vs an email don’t you think? Or would you rather get a birthday email? Easter email? Lol

I agree it is nice but my kids would not agree they are 100% all out digital and have in the past come to me to ask the proper way to address a letter.

I still send out hand written letters often but now days it is mostly to bug our elected officials.

By the way I have had very few issues with USPS over the years. The only exception to that is when UPS or FedEx do that hand off to the USPS for home delivery. I had one of those recently that went back and forth between 2 towns near me 3 different times before finally making it to my local post office 40 or so miles away from them.

That hand off is relatively new but old lol. It saves time because we serve everybody not just a few so it’s easier on them to drop to the local post office and let our carriers haul the last leg to the house. Digital communications are good yet very impersonal.

@mstokens Some how I ran accross this thread, and at first, I thought I wrote it.

You see, I live in Memphis, MI. and I’ll bet you anything, some one made a mistake and sent it here, they notice the mistake when there was no address that matched, then sent it to where it was supposed to go.