There is something weird going on, I think their system went down over the week. I ordered clippers for the dog last Thursday and had no visible shipping updates for 5-6 days. Now all of sudden this morning - poof - I have notifications again they will be here tomorrow.

Pretty typical for them

It was from Amazon. Usually they take pretty good care of Amazon shipments.

lol, looks similar my last two packages’ tracking info. They are experimenting with teleportation and caused a rift in the space-time continuum.

No wonder its expensive to ship things with USPS if that is how they ship stuff around on a daily basis.

Our scanning system was down for a bit. Don’t worry, you will get your stuff. The storms this week didn’t help though

Shipping to you for example is terrible and even worse with other carriers. International shipping is bad but if you order flavors from here and the total weight is less than 4 pounds, I would suggest a first class international IF you can do it. Will save you a gob of cash.

Maybe Memphis had to send it back to Detroit because Detroit forgot to put a postage stamp on it? I’ve been tracking this package for the past few days…One problem… I live in Tennessee! Luckily it’s nothing I ordered. I did check my front porch when I received the final notice tho! 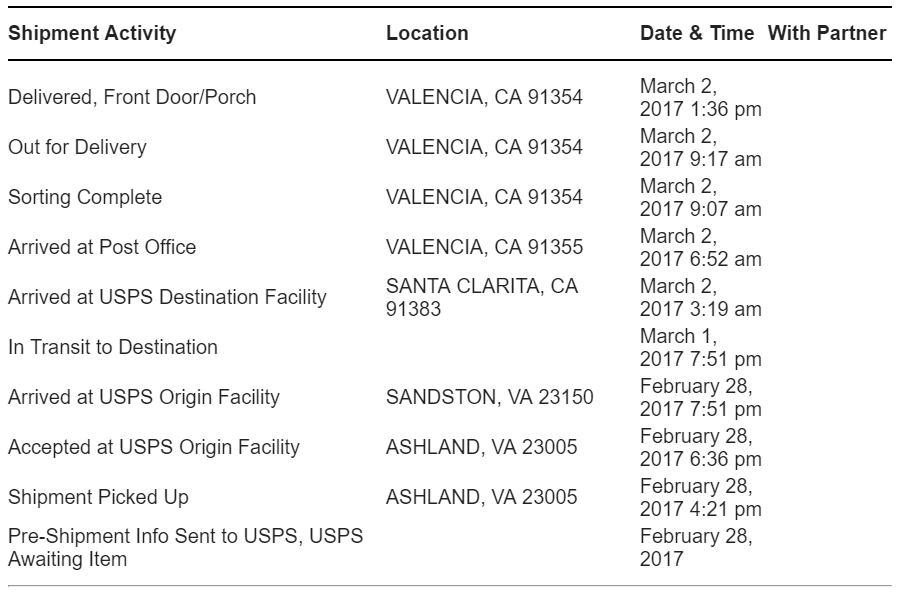 Glad to see it’s NOT just up here on the East Coast. Long time Amazon customer and as soon as they moved away from UPS and went USPS have had nothing but problems. Last order was totally borked, delivery date came/went, and a day later message shows up as undeliverable, no access to front door ?? Kidding ?? Sent Amazon video footage from CCTV showing NO deliveries, and asked them to ONLY use UPS for our account, NO USPS. We’ll see what happens…

But we are ALL doing the best we can! And here we were thinking we have done a good job this year so far. Fuck

I think this past Tues there was an Amazon crash on their server or something like that. I hope it gets straightened out for you.

Yes, I stopped getting notifications for 3 days, then tonight I’ve had about 20. And one spent 2 days in LA, before finally saying departed LA tonight. Was originally supposed to be here yesterday. But I’m so used to them messing up I just shrug it off anymore.

We have had a scanning issue this week. Sometimes the scanners are offline and nothing goes through. We do have a lot of missent stuff for sure and we don’t know why other than everything is automated now. However, for the thousands of packages we process daily not to mention everything else with a skeleton crew, I think we are doing well especially in our area.

R113, didn’t mean to paint with a broad brush. I have friends in the USPS and have heard the good and bad. The “problem” as I see it, as we are apparently on a “learning route” and I have no clue what that means, but am sure it’s involved.

No wonder its expensive to ship things with USPS if that is how they ship stuff around on a daily basis.

That does explain why it’s almost three times the cost to send items from the states than it is to send itmes to the states. The package goes for a road trip before it even leaves the country lol

No offense taken brother. I realize people have issues with our services but we do give 120% every day. I have had the same problems everyone else here has had but things happen considering the massive volume we deal with. Some of the training new people get is below par as well and those people have to learn the hard way.