Good Recommendation for an RTDA

I brought a normal RDA the other day and grabbed some of the premade coils for it. I wanted to know if anyone knows of a good RDTA that’s easy to work with for someone with some visual problems. I can’t see well enough to make my own coils but i can connect the pre made ones into posts. i’m just trying to save money Uwell coils get expensive after awhile.

Sry i cant help u on the rdta recommendation but I know of a few that need to use magnifying headgear for coil building and many times i wish i had one myself.

The Mech was just released so i looked into the rda and rdta as well. Pugs review here on ELR made me want one Pugsley's Ironically named review of the unbelievable DEJAVU RDTA

The Pyro and Peerless are both great RDTA’s. The Dejavu is really nice but also pricey.

How is your dexterity with your hands? Ok’ish? And as mentioned…a stationairy magnifying glass helps.

Like one of these…pretty cheap at harbor freight and tools. 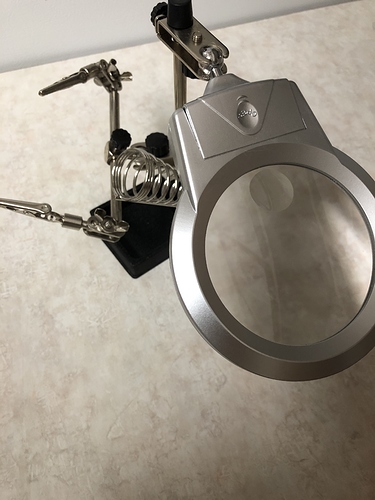 be here tomorrow, but 20 more than the pyro but same flavor, which is damn good, but the dejavu looks killer, like sexy as hell, like lana rhoades or lena paul !!

I use head ban magnifier with light, after 40 years of welding, my eyes ain’t so good !!

Does anyone know if the Deja Vu has an optional expansion? The stock 2ml capacity is kind of a deal breaker.

How is your dexterity with your hands? Ok’ish? And as mentioned…a stationairy magnifying glass helps.

The reason why I bring up dexterity is because I find most rta’s to be finicky on wicking.

Take the aromimizer supreme. It’s a good rdta…but you need to have the end of the wicks just touching the holes at the bottom. You can have 1-2mm extra, but not much more. This was my first rta and found success after the first 4 build attempts. But it is a bit airy.

The reload rta is good rta that I like. Slightly more forgiving on length but not on girth. You have to do some trimming on the sides to get the best wicking experience.

All in all…the moral of the story for most rta’s is that installing coils isn’t the issue but being able see the wicking and placing the wicks.

The above two are dual coils. For single coil the Aries and digiglavor siren2 are good. So is the kayfun v5.

All that being said. A lot of folks are finding they really like sqounking which may be a good route for you to go.

Does any of the rtda have a 4 ml tank or are they all 2ml?

Take a look on Wotofos SMM (Suck My Mod). It’s a single coil atty, very easy to build and with good space on the build deck. It also contain 4ml juice and finally … It’s taste amazing

If you weren’t having trouble with your eyes I would have suggested some more high end (Squape or Dvarw) they are really amazing, but a little more fiddly.

I like the peerless. Just have to find a us shipper not waiting for gear best or the other Chinese site

Instead of buying a bunch of RTDA’s to find your sweet spot, you might want to try the Dejavu, it probably be the last RTDA you will buy, but if you are like me, just buy them all

Gotta vape them all!!!

My Peerless Rdta will be here tomorrow. I’m so excited. I’m getting a diy kit from Amazon on Friday

I got the peerless RDTA and it works great, However it eats 4ml of juice in like 20 minutes. Does anyone know if there is a way to keep it from eating so much so fast?.

I was thinking of turning it into a one coil tank but not really sure if that would help.

I love the build deck. Its just not sustainable if it eats juice that fast and I don’t even chain vape that much.

Any ideas or recommondations on how to fix this or if i should just go with a different model or even just a normal RTA. thanks everyone