I just got some Gummy Candy (Flavor West) and its not in the flavor list… Can an Admin fix that? Not sure how common of a flavor this is but you’d think it would of been in the list by now, no?

It probably shouldn’t be vaped as it contains a form of sugar. Sugar can caramelize and even burn at low temps, and produce toxins and suspected carcinogens. 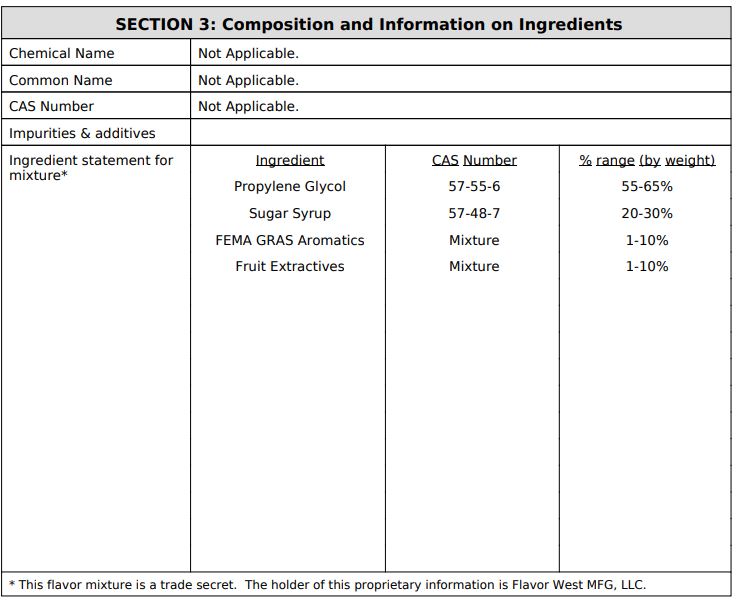 The % of DIY that would purchase it are largely made up here so perhaps they’d honor that request?

Got it… So frustrating! Bull City is great but when they do this it drives me nuts! Thanks Guy’s!

Is arrogant to think flavorings are only used for vaping and be careful when purchasing by checking the database first. I know wizlabs carries some LAs that arent vape happy but wasnt aware that Bullcity did tho i’ve never used em.

I love BCV I’ve only used them for my flavors

All that being said…

You might want to read these. You’ll be less frustrated once you know how to find the correct flavors.
Link The ELR Users Guide to Creating Your Flavor Stash
Link e-liquid-recipes.com/guide#Working_with_your_flavor_stash

Gummy Candy (Flavor West) and its not in the flavor list…

Some companies occasionally take liberties with names. I merged that listing a couple days ago (when I looked it up on FW site to verify it and other Gumm* variants, of which there were A TON for just FW alone).

While their search engine (key word uses) is excellent when it comes to trying to find the flavor you’re looking for (especially with brand abbreviations)… I’m thinking the only reason they would have changed it was “fear” of being sued by Haribo (or whoever owns the rights to “Gummy Bear”). Even though it would technically be on FW. Who I’m sure has that sorted since they’ve used Gummi instead of Gummy.

But who knows. That’s just supposition on my part. lol
Bottom line is as woftam said though. FW doesn’t make a Gummy Candy.

Because someone has already readded it to the database. /sigh

@Pirate4 deserves a pat on the back.

It seems they have done their homework in the little time spent in the forum in knowing to try and list flavors correctly. Now the result can be found by anyone similar that takes the time and uses the search engine.

If you still want to use it even after the warning that @woftam gave you this flavor was a popular choice for cloning of a juice called Gush back in the day. Might try a search for it

Found one. Made by @NotCharlesManson I remember making this a long time ago. Or one mighty close I think thats when I got my Shirley Temple was for this.