I’m looking for a mod that is more portable then my wismec rx2/3. Any recommendations?
Criteria;

2nd, looking for some rebuildable tanks, what do you think of the Kanger Protank 4. I like that I can get prebuilt coils too.

3rd, need a RDA for mixing I like the look of the Tsunami 24 with the window. Thoughts?

Lastly, what wire should I get. I’d like to try different styles of coil building, including Clapton wires. What type of wire can be temperature controlled. Are there specific coil builds and wire types that are better for flavour. I’m mostly chasing flavour. But I’d like to chuck a cloud as the kids say every now and then.

For the mod question: I love my little Joyetech Cuboid mini. It doesn’t have a removable battery but it is small and tough and it runs as TC, power mode, VV etc. I have not tried the tank that was made for it though.
This one is getting a bit old now so to replace it I’ve built a DNA 75 mod with an18650 battery.

Not bad, I found the wismec rx75 only problem is the tanks can only be 22mm on it as it’s recessed. Know any good RTA at 22mm.
Any feedback on the Sigelei spark? They any good?

I like my current combo of Hcigar Nano VT75 with iJoy Tornado Nano RTA small. compact and does everything you ask, except not RDA but iJoy do the Limitless tank if you want an RDA, I have found the stock coils for the tornado nano though, accept flavour changes very quickly and the flavour from the vape from them is outstanding, also the deck is one of the easiest I have built on. Being watching the youtube reviews for the iJoy RDTA Box Mod 200w box, really tempted to get one for xmas. Dual battery, so may be a bit big for what you are looking for though.

The Joyetech eVic VTC mini is a good choice

I love my Hcigar Nano VT75 with a Mage gta on top. Thats a work horse

Thanks, keep them coming. Still got a week till I pull the trigger.

When you say portable to replace your Wismec do you mean a mod you can use while on the go or if you pop out for a pint etc, or a full replacement for your Wismec ?

Its funny I’ve just purchased a Wismec RX2/3 to take on my hols with 6 spare batterys, nothing worse than sitting by a pool and your mod runs out of power, now just pop to room swop batteries and Vape mania again

I know a lot of people have these but I use my RX 2/3 with 2 batteries and a Smok BaBY Beast V8 and it takes up very little room. You just have to compromise with how much power you’re carrying versus being compact. Its the best pair for each other, the baby beast is the #1 tank for the RX 2/3. Its incredible. Shorter and less space/volume than a Sigelei with a normal TFV8 which is what i started with… It works perfectly, doesnt Leak and creates the most vapor I’ve seen anywhere for such a small unit. I noticed “bluenose63” shows a Hcigar Nano which is virtually the same size although i know nothing else about it other than it also looks like a good setup also, and if i knew about what the other people are referencing id say something else other than the compact setup i have that works for me… 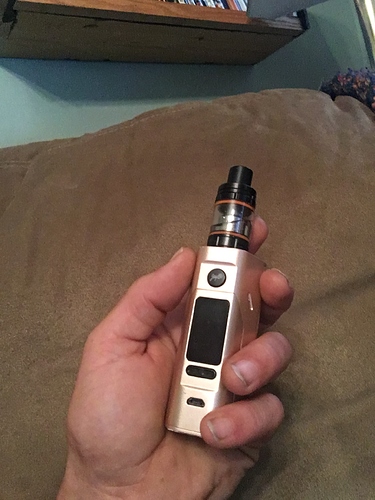 Same set up ive got on order cannot wait

I’d recommend the Cuboid mini, except it’s a built in battery (though while being tough, the finish will look crap in only a few months) and have read alot of folks like the Eleaf Pico. That would be my first choice for small, cheap, with 18650 & TC ability.

If money isn’t tight, there’s only one REAL answer IMO, and that’s a DNA75, whether that’s the HCigar or otherwise.

As for wire, stainless steel is the only way to go IMO. Take your pic 304, 316, or 430. Personally I would recommend 316, as it’s the easiest/cheapest to source, and most compatible (from a mod standpoint) Unless you get a mod that you can manually key in a value for the TCR.

I second the stainless! I find the flavour much better on stainless, and it can be used for both wattage and TC modes - it’s the most versatile wire in a builder’s arsenal!

You have a couple of good choices listed above for mods. The HCigar and the Alien.

As far as rebuildable tanks that are not an RTA I would recommend the Crown 1. You can get an RBA for it fairly cheap but it’s not the easiest RBA to master if you have large hands. Once you get the hang of wicking it though it takes a few minutes.

While the Tsunami 24mm with window looks good, the window is pretty much useless IMO. A Tsunami 22mm will do the trick with testing your flavors. I haven’t used the 24mm version of the Tsunami but the 22mm gets used daily and I get great flavor and clouds from it. Easy to build and wick.

And please have a look at the Praxis Banshee

The Crown RBA was a disappointment to me. It could be easier to build but that’s ok. But the airflow is so restricted compared to the stock coils. I’ve built it once and that was it for me.

my rx2/3 is my traveler now as well. The pico’s and hana one mods get no use any more now that I got a belt holster from @coffeebum on ECF for my rx2/3 (will hold it in 2 or 3 battery mode and will fit my rx200s also). I went out for a day trip the other day and took the rx200s in the holster and put the rx2/3 with rda in my vape case with the spare juice and batteries.