Has my Flavour gone off?

My TPA Bavarian Cream is a yellow colour, and on a hand test taste like old socks. Has it gone off?

Do you work for Jim Henson Inc? If yes, do you come home on occasion and find yourself still wearing “work clothes”? If yes, then it’s probably fine.

If the answer was no to either, or both of the above… Then I would bet that yes, your flavor has probably gone bad.

Bugger. Just done a mix with it too.

In general, tpa’s stuff is filled with ethyl maltol, maltol and plenty of other stuff. Should think they don’t last long, but again in my experience they last forever.

Wouldn’t worry about it, unless it’s packaged in very cheap plastic or stored open, but never know, hence single flavor testing might give you that answer.

In my experience this always been a pale - dark yellow flavor to begin with.

I don’t know if that’s what you’d consider this: 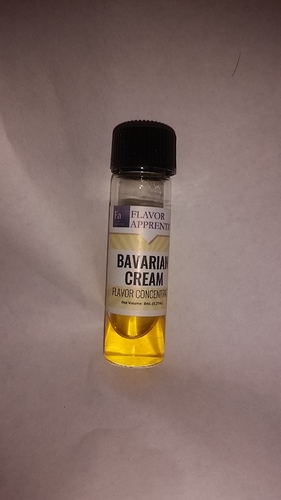 (This bottle is less than 4 months old, and perfectly fine)

To me it’s more of a gold than yellow, but wouldn’t be the first time I see things differently.

For whatever reason, it reminds me of a metallic tone, than a lemon (or some shitty paint job on a Dodge or Camaro. lol)

There’s just some flavors that you have to mix with before you’ll know the final outcome. This is one IMO.

Smell and finger tests don’t always give an accurate indication.

Thanks to all who have responded

Just curious as to the last time you tried it? As you progress as a mixer your taste buds will change.

I hadn’t used TFA Bavarian Cream in at least a year or more and I can’t stand the smell or taste of it anymore. I thought perhaps it had " gone off " so I purchased a little 10ml bottle and… Still can’t stand the sight or smell or anything else about it.

In general, tpa’s stuff is filled with ethyl maltol, maltol and plenty of other stuff.

I was blissfully ignorant of this and use TPA’s all the time. Also use CAP’s to a lesser extent. Is there a BC you would recommend?

The contents (and rough amounts) for TFA Bavarian Cream can be found here:

This list isn’t exactly “easy to find” but it’s one that lists their flavors as well as the SDS sheets and components lists (on the far right) for each:
https://shop.perfumersapprentice.com/specsheetlist.aspx

If in doubt, or have a question on a flavor, this is a worthwhile bookmark IMO.

I have used it fairly recently, and to be honest I got none of the off notes in the mix that I got from the finger test. After reading your comment I’m beginning to think it just smells weird anyway, lol.

Thanks for that. I’ve recently mixed with it so I guess I’ll soon find out, lol.

Tasting like old sock, I don’t know, never liked the flavor to begin with

What do you use in it’s place?

To me it’s more of a gold than yellow, but wouldn’t be the first time I see things differently.

Lol gold, yellow, pale all the same too me. I’m colorblind but it has more of a yellow tint rather than golden. It’s nitpicking, Sir

I was blissfully ignorant of this and use TPA’s all the time. Also use CAP’s to a lesser extent. Is there a BC you would recommend?

First of all there’s nothing wrong with that BC, it does have its place in recipes, especially if you want to archive a force muting aka taking the rough edges off/out of a mix, or need it as a binder.

I just wouldn’t use it as the primary cream, because it tastes nothing like a good bc, too me and that’s of course subjective. Overall I wouldn’t say it’s a bad flavor, I just don’t like it, if you do stick with it

Anyways, the one in using is (JF) Bavarian Cream, it’s the most authentic and can also stand on its own. Very potent in my opinion, which I like, again subjective as usual lol.

But it does have a titsy tiny chocolate hint, which can be masked in some recipes but not all. It’s not tootsy roll or cocoa, it’s more a creamier darker nuances that actually comes from the vanilla and cream.

Think heavy whipping cream, you make yourself not the spray can, after you eat a spoon full, you get this coating in your mouth that can sometimes remind of very light chocolate. Jungle Flavor definitely captured that.

I love it out of all the bc, but some might not, so I’ll mention that and it doesn’t mute or emulsify like tpa’s does!

I heard good things about (FA) bc, but I have not ordered it yet. I keep you updated whenever I order more flavors, and you might not have it.

@Steve68 I have multiple bottles of TPA BC and they are all a shade of yellow. It darkens slightly as it ages, and I’m still using part of a 2 year old bottle with no issues. I feel that TPA’s BC has a somewhat distinctive taste, love it or not. If you are getting SOCKS however, that’s not good.

If you are getting SOCKS however, that’s not good.

@Steve68 Yea that doesn’t sound promising… try coming back to it in a day or so. your sniffer might be off right now, especilly of your doing a lot of finger tests…

Scent wise - I get a heavy Carmalized Deeper Vanilla scent. Don’t like to do finger tests, but I did, and get a acidic bite to my mouth and lips. No Dirty Socks like some other flavors have in Spades.

0.5%-2% might work better in a mix as a Bavarian Flavor, but like @eStorm I didn’t get any Bavarian flavor At my 5% test it was mostly crispy caramelzed part on top of a cheesecake Then Sweet, then some vanilla and a little fluffy feel.

Finished a new round of small SF tests, some had very long steeps. out to 3 months.

Sorry it’s not to descriptive as others, they were fast little 2 mL batches. Just enough for me to sample for a minute or 2.

Sorry it’s not to descriptive as others, they were fast little 2 mL batches. Just enough for me to sample for a minute or 2.

Not a violent person, but you make me want to smack you

Nothing to be sorry about. Notes are notes and you put work into it. I and pretty sure many others respect and appreciate that.

Just because it’s not 10 pages or takes up half a forum page, doesn’t make it less valuable. In fact, never can have enough opinions or even different opinions on flavors.

Helps all of us, so please keep sharing, without thinking that they are not good enough!

Yes I know derail, but c’mon it needs to be said