My thanks go out to Anita at GearBest for the items in this review ! 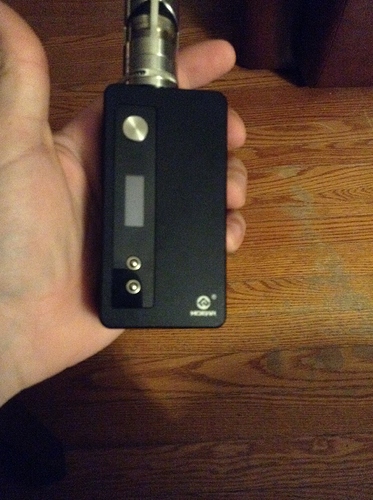 Now first I have to say this is my first mod I’ve got my hands on from Hcigar but I’ve heard that they put together a quality box ! I heard right ! Not only is it an authentic Evolv Dna40 chip but a well thought out and quality made box as well. It has had some revisions since it hit the market but to me that says that Hcigar is a company that takes feedback well and makes the necessary changes to keep it client base happy . Bravo
Hcigar. 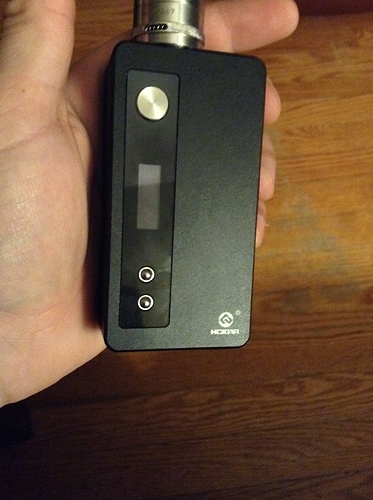 Now the box it comes in ain’t fancy but it doesn’t need to be. I’d rather have a great mod come out of a crap case than a shit mod come out of a nice case any day, and this is a great mod! It fits nicely into my hand but I feel the edges of the box could be a bit more rounded but nevertheless feels comfortable . I’d heard people complaining about the placement of the fire button which is on the front of the box instead of the side , I think those people hadn’t tried the box yet though as I find and many others have probably found that the placement is quite nice .
It feels like well made box that is going to be right up my alley . 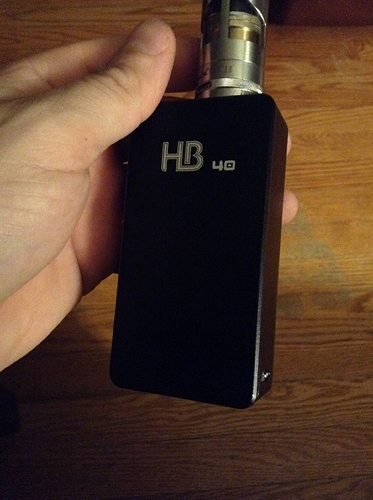 In my opinion the box is almost flawless in terms of style . Now I’m only speaking on the final revision of the box but the finish of it is quite nice , textured yet smooth The screen on the front of the box is refreshing and functions quite nicely
One of only two flaws in the overall aesthetics of the box is the off centre 510 which probably could have been remedied by an overhang in the top of the box to the back and a shortened battery cover , but in the grand scheme of things isn’t that much of a bother . At least it sits flush ( only in the revised editions)
The magnetic battery cover is a very nice touch ! Magnets are strong but there is a wiggle in the bottom of the battery cover that clicks every time you grab the box which I find kind of ruins an otherwise terrific hand grip .
Even the buttons on this mod feel like quality ! The firing button has a nice swirl texture to it which makes it feel nice to click ( and it is “clicky”) . The oh her buttons are clicky as well and feel very sturdy and functional .
The size of the mod is perfect for my hand ( medium ) as it sits comfortably with my thumb resting on the fire button . 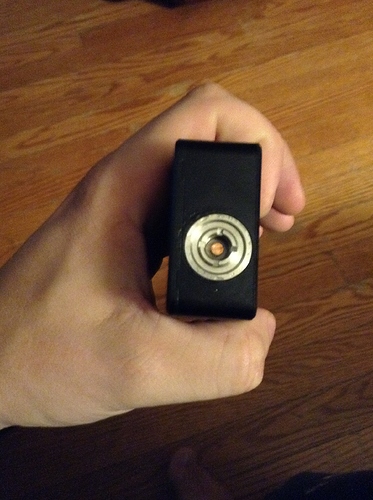 What can I say …it’s a Dna40 ! It functions as it should . Previous models didn’t have the atty lock feature which is a must with the dna40 chip so that was an excellent choice to update that on Hcigars part. It has all the quirks of a regular dna40 mod which most are well versed in so I won’t go into those but I will say if you are looking for an entry into temp control skip the cheaper TC mods and just get this , it does what the others say they do and costs a fraction more . As far as I know it’s still the cheapest authentic dna40 mod out there so that’s definitely a selling feature .
One thing I noticed is that it seems to not recognize the nickel coil right away after a sleep .seems to take a second to come correct and I suppose that could be a problem , but if you are aware and just hit the button for a split second and let it wake up it’s fine .
Other than that it fires true in temp control and wattage mode and seems to be very sparing on battery life compared to some recent single 18650 mods I’ve reviewed . 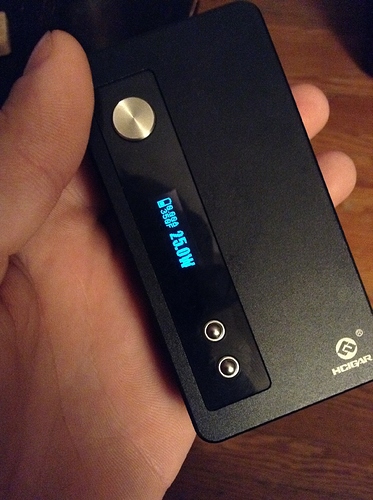 Authentic Evolv Dna40 Chip
Updates( the fact that Hcigar updated this mod rather than abandon it is amazing)
Size
Price ( I mean come on !! For authentic dna40 !)

Battery cover ( the clicking drives me nuts , and it seems like it could have been more easily fixed than other probs )
Off centre 510 ( if your picky ) 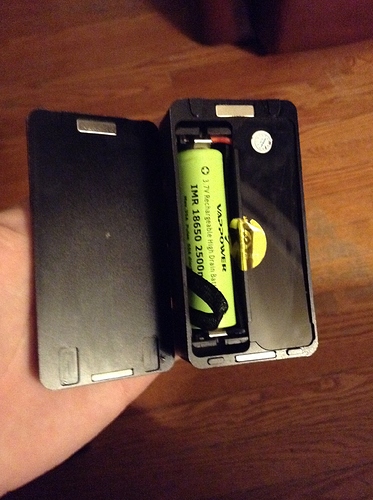 I love it ! If your not a high power vaper and looking for a nice entry level TC mod then look no further . It’s not the newest kid on the block but probably should have garnered more attention than it did when it first came out , especially now that it has been perfected . Hcigar really knows how to put together a great box and this one should not be overlooked by people wanting to break into the dna40 scene !

I also want to add that I’ve been using VAPPOWER 18650 3.7v 2500Mah Battery with a 35a Pulse and 50A discharge rating . I don’t have the fancy testing equipment to verify that info but I will say they have been performing fantastic. As good or better than my sammys or lg 18650s .

I was with you until this point. I own 2 cheap ones with better features for less. Both operate right on point with no rattling doors or delays. Excellent battery life, more power a great hand feel, a beauty the eye and Titanium TC. I don’t see where that one is a better value. The more recent yihi chip are good and I can vouche for that personally. I just can’t see myself paying extra for the dna40 name. At one time the dna40 was the only tc out there so they could get what they wanted price wise. Now IMO their only customers will be their loyal followers. It’s gonna be like Apple and Microsoft. I don’t see yihi users jumping ship for a dna40. If you didn’t get a free one would you buy it?

Authentic Evolv Dna40 ChipUpdates( the fact that Hcigar updated this mod rather than abandon it is amazing)Size Price ( I mean come on !! For authentic dna40 !)

That is a mighty short list of pros to be demanding extra $$$.
It should be a lot better in order to command a higher price. If it wasn’t for “CHEAP TC MODS” I would not have discovered TC… so I owe them a debt because there is no way I would pay what they are asking.

It’s not really that much more expensive than some other recent mods to come out with TC that don’t function half as well. I own several of the clone DNA40 chips ( one of which that cost more than this box)and I know you do to. I know how they function and this just functions smoother . If I had a chance to use this before I purchased my flask I would have bought this over it.
The list is short because there is not much to say! Its a easy to use uncomplicated box that works as it should . I really had to dig hard to find anything about it that I didn’t like . The only true con is the battery cover moving slightly and making a clicking sound .
So in conclusion yes I would pay the extra cash for the chip because it’s not really that much more and it does truly work better .

Cheap TC mod kinda covers alot ground. It almost imply anything other than a dna40. To be truthful all TC mods has had their growing pains and all have made improvement. I just wish you had worded it differently because I’m really enjoying my cheap TC mod.

" TC mods I’ve been using this one functioned flawlessly . I had hiccups with my others like the invader or my flask and even my IPv4 which fetched an even heftier price than this box( granted it has more features ) . That’s not to say that they are bad they just don’t work as well as this . Evolv has had its faults but they have taken the chip and worked out the kinks

just don’t work as well as this

that’s real confusing for me. I’m not having any problem with any of mine, and own 5 and 2 more on they way. I even figured out the vf. I’ve been reading threads on ecf and it sounds like a lot of user error. the one advantage I heard for the evolve is that it reads temp truer than than the yihis. but to me I don’t see much difference in 500 and 512 degrees. I’m not stuck on a number, I dial up or down til I get my desired vape… even if its something like 472 degrees… who cares if it’s really 481.once it’s right I lock the keys and I don’t see any fluctuation. to me the differences are so minor to the point that it’s being picky. how can one be better when they both work if you operate it properly. like I stated earlier it’s that Apple vs Microsoft syndrome all over. I don’t knock evolve… I just don’t like the price. and those that paid all that money are looking for any fault they can with yihi to justify spending all that money. in the meantime I’m vaping away on my cheap mod with no problems and no worries.

These new yihis should be given that same opportunity. They all will get better with time and TC vaping will become effortless.

Perhaps with my experience with improper usage of other mods has trained me to use this one without problems .I still find it better when comparing the same tank with the same coil on my invader mini and my flask . Temp seems to stay truer …it’s hard to explain . I’m sure you’ll have another rebuttle to these comments but I think if you had the chance to use it you’d know what I mean if you compared them as well. 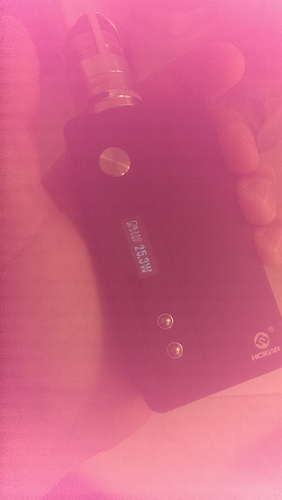 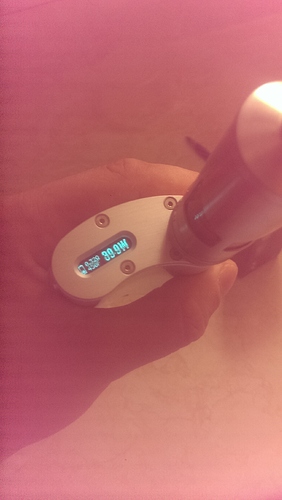 So you are comparing one DNA40 against a flawed DNA40 Clone. And didn’t you state you bought the cheaper of the two. I’m speaking about the Yihi vs DNA40 debate. Everybody know that VFv2 was flawed. I’m telling you I get 0 dry hits and a good vape from it and all the others I have. I don’t care about numbers when it’s working.

These new yihis should be given that same opportunity. They all will get better with time and TC vaping will become effortless.

I’m saying this flask after shipping cost me as much as this one cost with free shipping and It works great . Authentic DNA vs clone isn’t a fair comparison but if someone was looking for a DNA40 and was leaning toward a clone around the same price or even 20 bucks less …wouldn’t you buy the original if you wanted true TC ? Had I known about this mod I would have got this over the clone any day of the week

So I guess the IPV3Li I you raved about the other day is a mute point now?

I wouldn’t say I raved I said I was leaning towards getting one over the snow wolf after reading some reviews but I decided against it after more info came out .

In any event all my builds are below .10 and that 40 watts won’t get me there.

Not with those monstter coils your wrapping !

I’m dual standard tio2 in tc all day. My next big thing. I’m leaving them big coils to @Jondamon. I seen the light and it shines down low.

Lol ya I got some titanium coming hopefully by the start of next week …can’t wait .