Decided to do this here instead of vape mail because I do have a few comments. Although I won’t attempt a full review as I am relatively new to vaping I do submit the following:

With a “theme” that works for the user and after finishing the manufacturing process, this mod is top notch IMHO in its class. 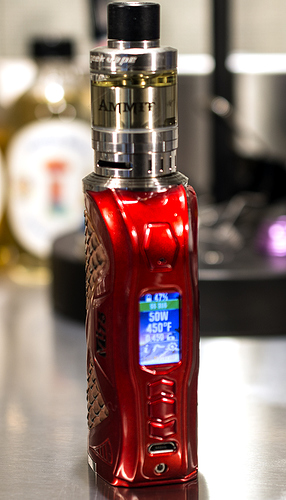 Yeah, HCigar doesn’t do much of anything with configuring the device. They pretty much slap the board in, upload their logo, and that’s about it. Make sure you set your internal resistance too. I’m not really going to complain about it though. It’s all easy enough to do in EScribe. I have a VT75 Nano and it’s a great little mod, but my main complaint is the screw on battery cap. Did they happen to change that with the VT75C or is it the same shitty screw on cap? For the Nano I’ve just learned to leave the battery in and charge it through the USB port. And at least Fasttech sells spare C-Frames and battery caps for it. I’ve already had to replace them once and will probably have to replace it again if I ever want to change out the battery.

Neither are the DNA75C chip, but I’m glad I found the Lavabox M. Picked one up for $71 several months ago and I’ve been really digging it. Then a week ago I picked two more up during Volcano’s 4th sale for $45 each, but I had a 30% off coupon that made the mod $32 and some change. So the VT75 Nano will be the backup to my backups backup. Or if I just need a ‘junker’ mod for some reason, it’s not a bad junker to have around if you ask me.

A lot of folks complain about the screw on battery cap so I guess it must be a pain for most. I actually like it. I have a VT75 as well as the VT75C. They did put courser threads on the 75C which makes it easier to get started. I don’t understand why I don’t have difficulties starting either of them, but I just don’t. And yes, the internal resistance is one of the parameters that is not set. Out of the box it is set for zero. Lol, ya right!

I would snap one of these up in a second but the over-done case design is just not my style.

As far as the factory loaded software, that is not an issue, you just pick you favorite from the many excellent publicly available one and the you are good to go.

If they had done a slight update to the VT75’s body I would have been all over that, but the new design is just-Bleh. I’m not a fan, either.

What are your thoughts on the Ammit (I take it this is the original single coil one). I like the vape from it but the juice flow control is totally janky. It is opened and closed by turning the base and mine in the fully open position causes the tank a slight wobble from the base, which I find extremely annoying. Great single coil flavor but I really like the construction of the 22mm original Merlin better. Perhaps my deck was slightly out of alignment originally. Back in the day the build deck and base were not one single piece, while a little more to fuss with was a better design (IMO).

I have heard that some of the 22mm Ammit’s wobble. I guess I was lucky. Mine don’t. Honestly, I’m not a fan of juice control. I mix everything 70/30 and prefer to just get the wicking down. I just leave the juice control wide open. The one in the picture is the 25mm single coil. I am very impressed with that tank. I get wonderful flavor, as much vapor as I could possibly want, and no issues with the construction. Obviously I can also get some resistance using SS without having to have a kabillion wraps.

Yes, same tank and I agree with you on JFC. Unfortunately, mine wobbles quite a bit; the flavor though with a 2.5mm kanthal fused staple clapton is great. (@ 3.8ish volts / I prefer single coil RTA’s with builds between .25-.40 so this tank services my needs well. I don’t have a genny type of newer RGTA’s yet but the Wotofo SMM looks like a good one.

That’s the range of resistance I like as well. I’ve got a few single battery mods now that I just like a lot. No accounting for taste, just worked out that way. With builds in that range I get some battery life. The SMM is a very nice tank too. Gotta kinda watch the “wash” of liquid after it gets below the glass line, but it also has some great flavor. There are a lot of really nice RTA’s out right now. Both in single and double coil. The Ammit double coil is a nice rig as well but I still prefer the 25 single.

That is a purdy little mod!

I have been holding out for the blue version of the Hcigar VT75c to come in stock. But whilst waiting and the negative reports about how they have used the board within this model. I have changed my mind and getting the Lost Vape Paranormal instead.
The Lost Vape design still appeals to me and although dual instead of single battery, Lost Vape seem to put have put a bit more effort into the finished product with the board, from the few reviews I have seen.

and the negative reports about how they have used the board within this model. I have changed my mind

Sounds like some worthwhile reading is afoot!
Link me please!

Will have to check that out once I’m on wi-fi!

But just in case you misunderstood my comment above, I was curious to the issues bluenose63 was referring to with the Hcigar VT75c!

I personally think if you are paying £120 for a device, I would hope the factory profiles would at least work well, straight out of the box. Then I can set my own after some learning time. The Hcigar just seem hard to read, temp settings out and poor layout.

May be making a mistake changing my mind for for the Lost Vape Paranormal, but time will tell.

Love the Lost vape line as well. Appreciate you sharing the Paranormal. Nice looking mod for sure.

That Paranormal is really nice. I don’t think you can go wrong. I can’t agree more that with the price point on the VT75C one would anticipate a fully finished mod. After I ran the case analysis and downloaded the theme that the Therion ships with the VT75C is fully functional but again, I had to finish manufacturing the mod. I guess to be fair the theme is pure choice and that is what the DNA 75C is all about. PBusardo also did a video with a representative of Evolve and the gentleman talks about Evolves decision to go to the 75C. I agree fully with his assessment as I love both my Therion and my VT75 but the navigation of the DNA75 is just a PITA. Press this three times. Then press this and this. Then stand on one foot, put on hand on your head and press these two buttons. Having an intuitive menu is huge for me.