Okay so I’m trying out new flavors from HC just a few and thought they needed a place since it’s hard as sin to find out stuff about them.

Cheesecake: Tried at 3% 4% 5% every one of these tasted like coffee (sweet coffee) and it got more pronounced the higher I went. No idea why it tastes like coffee.

Toffee … NO just no. The worst chemical taste and I let it steep after doing a vortex mix for five days… nope just nope don’t do it.

Approximately 1 month ago I noticed that the DIY E-Liquid section was removed from the Health Cabin website. I have a good number of HC flavors in my stash and was interested in purchasing more from their re-seller DIY Vapor Supply.

Upon contacting a representative via their website and on Facebook messenger I was notified that they would be going in a different direction. I was told to contact their supplier directly if I would like to purchase flavors in the future. The supplier - MagicalFlavour.com.. Upon contacting Magical flower a representative stated that if I have any requests, to please feel free to contact them as they respect their customers.

“…happy to let you know that we will sell Flavors again in coming 2 weeks, stay turned. Thanks.”

I had inquired if they would be the same flavors previously listed on their website. I was told:

“most of them are the same, but we will sell them in another new brand. price is the same or a bit better.”

Leading to this week. The new brand “VAPELF”. I had received notification from HC that the flavors were now live and available on their website. Not all the flavors that were previously sold on the HC website are available. However I was told that flavors previously listed are still under consideration. To the best of my knowledge, most if not all the previous flavors can only be found on either DIYVS or MagicalFlavour.net. So if you use HC flavors, please be aware of these changes as you create your recipes. 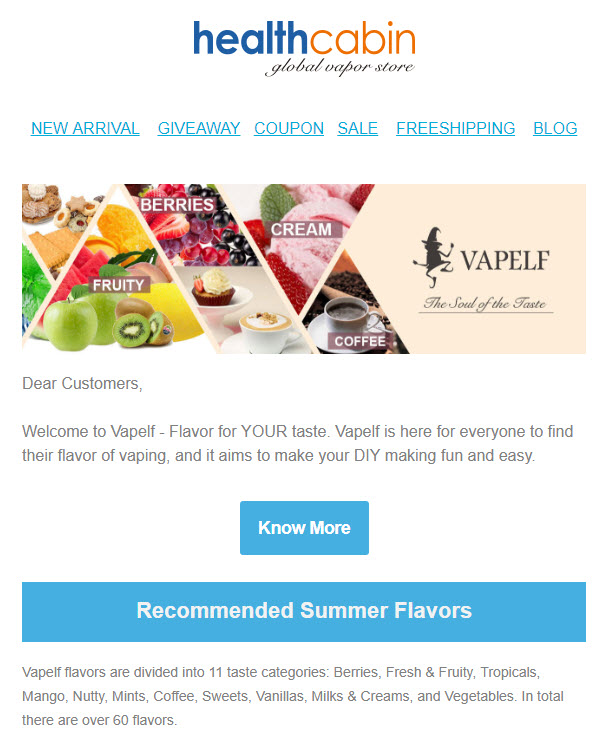