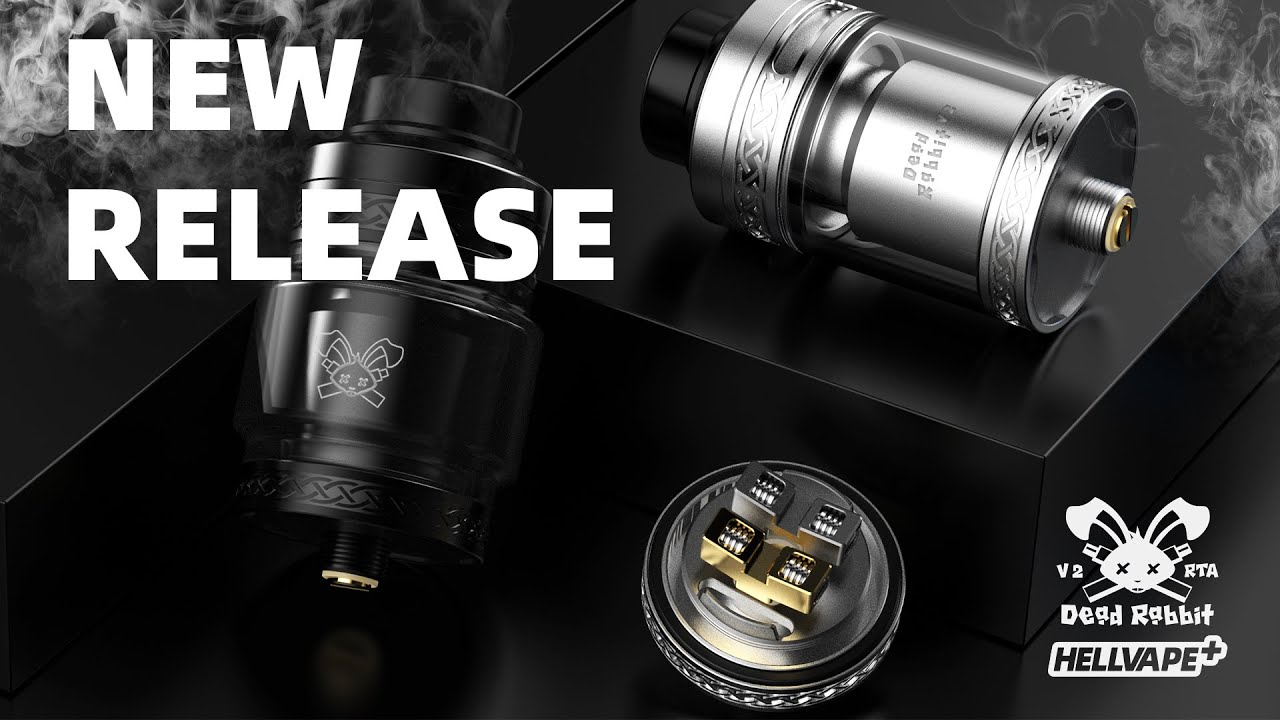 Thanks out to Sue @healthcabin for spurring me into action, shipping this to me for the purposes of this review, and getting me off my lazy reviewing butt. Having never owned the v.1, I kept seeing this one mentioned, and was interested to see how the v.2 actually performed. Let’s just see what’s what here …

Now admittedly I’ve never had great flavor luck with top air flows, but you just NEVER know. Honeycomb vents on the chimney top cap ?? What’s up with that ?? 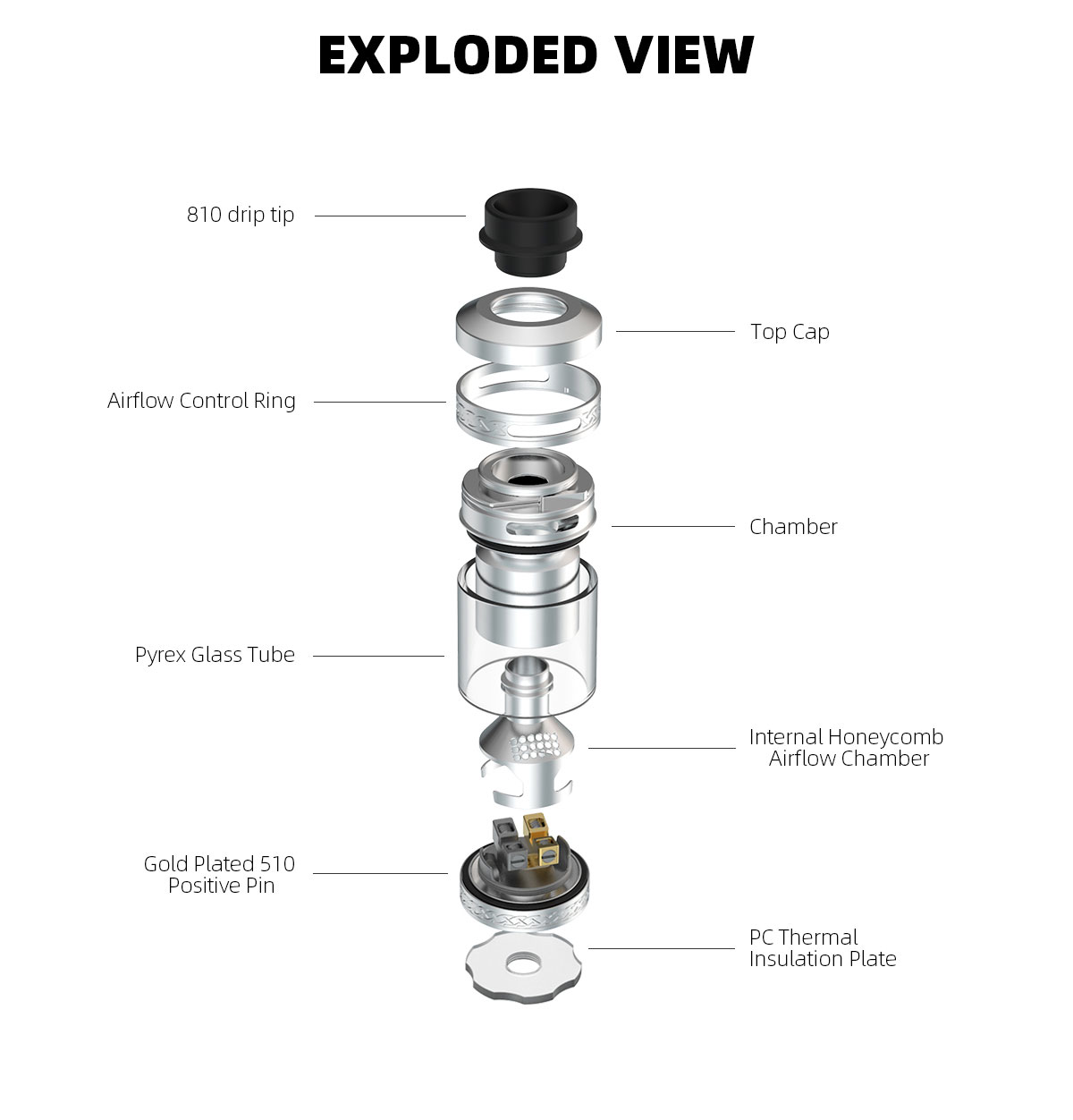 Looks interesting, not hitting at or under the coils, but very interesting none the less. We’ll just see. 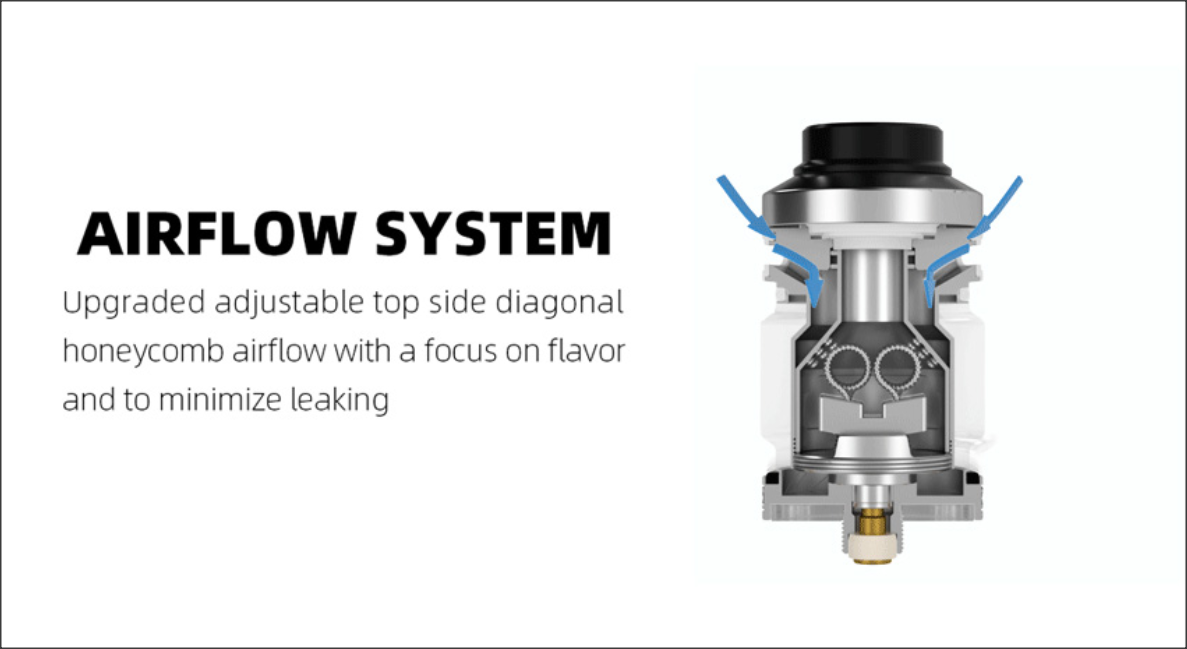 Who doesn’t get excited by an orange box, I know I do !! 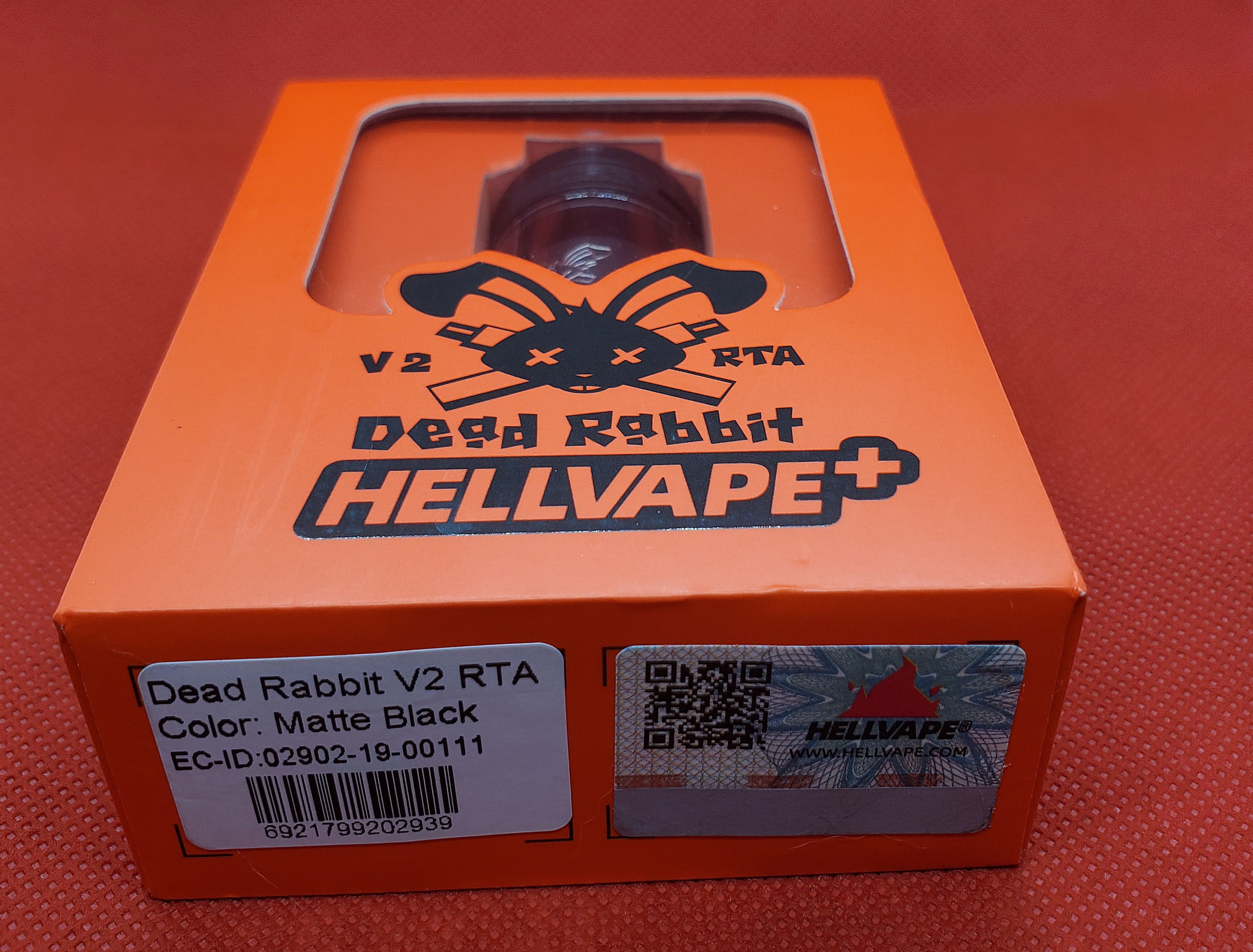 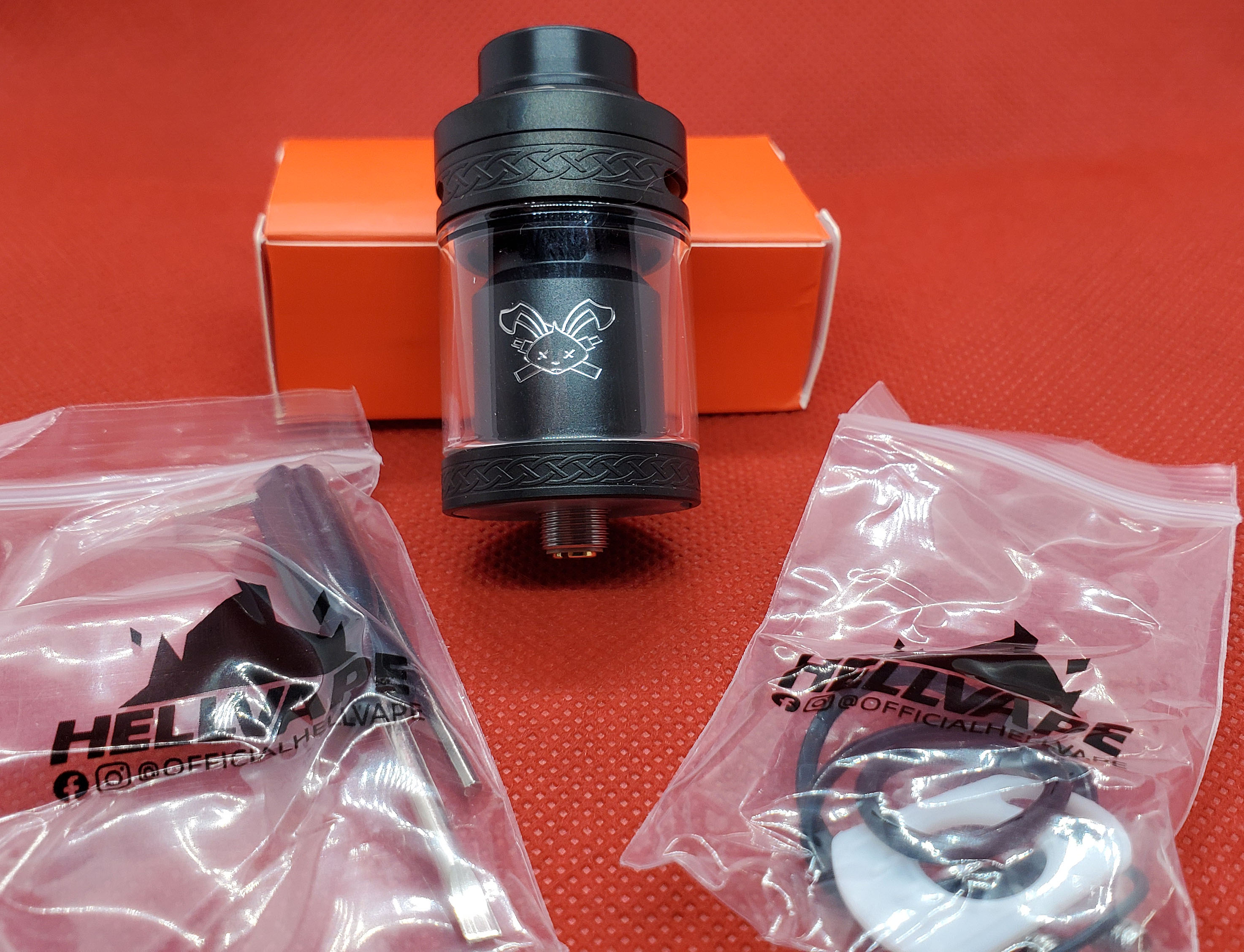 When breaking it down to clean, checked everything, and the machining, fit / finish, and detailing appeared to be above average. 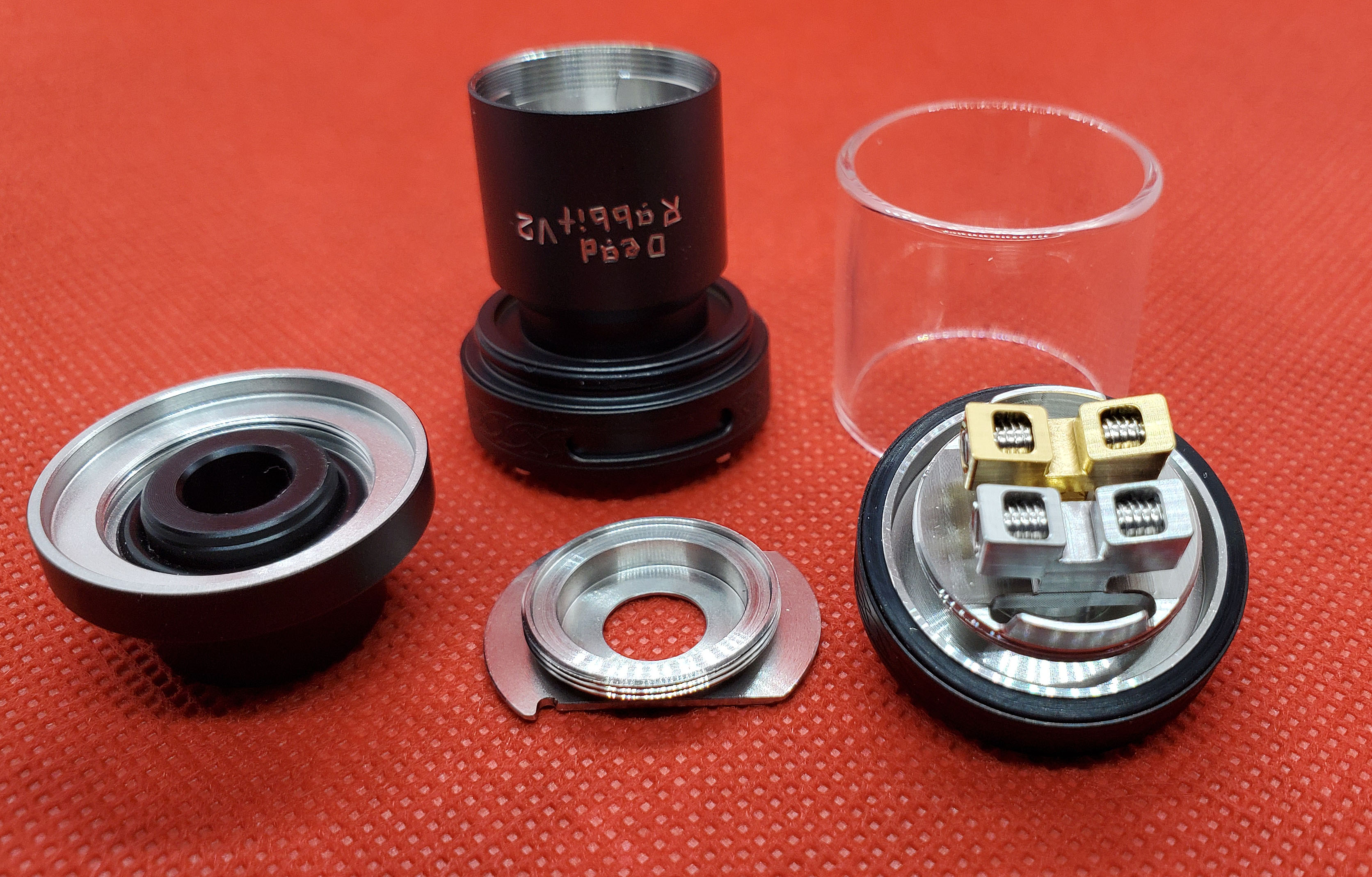 Little extra touches like the knurling on the adjustment ring were nicely done. 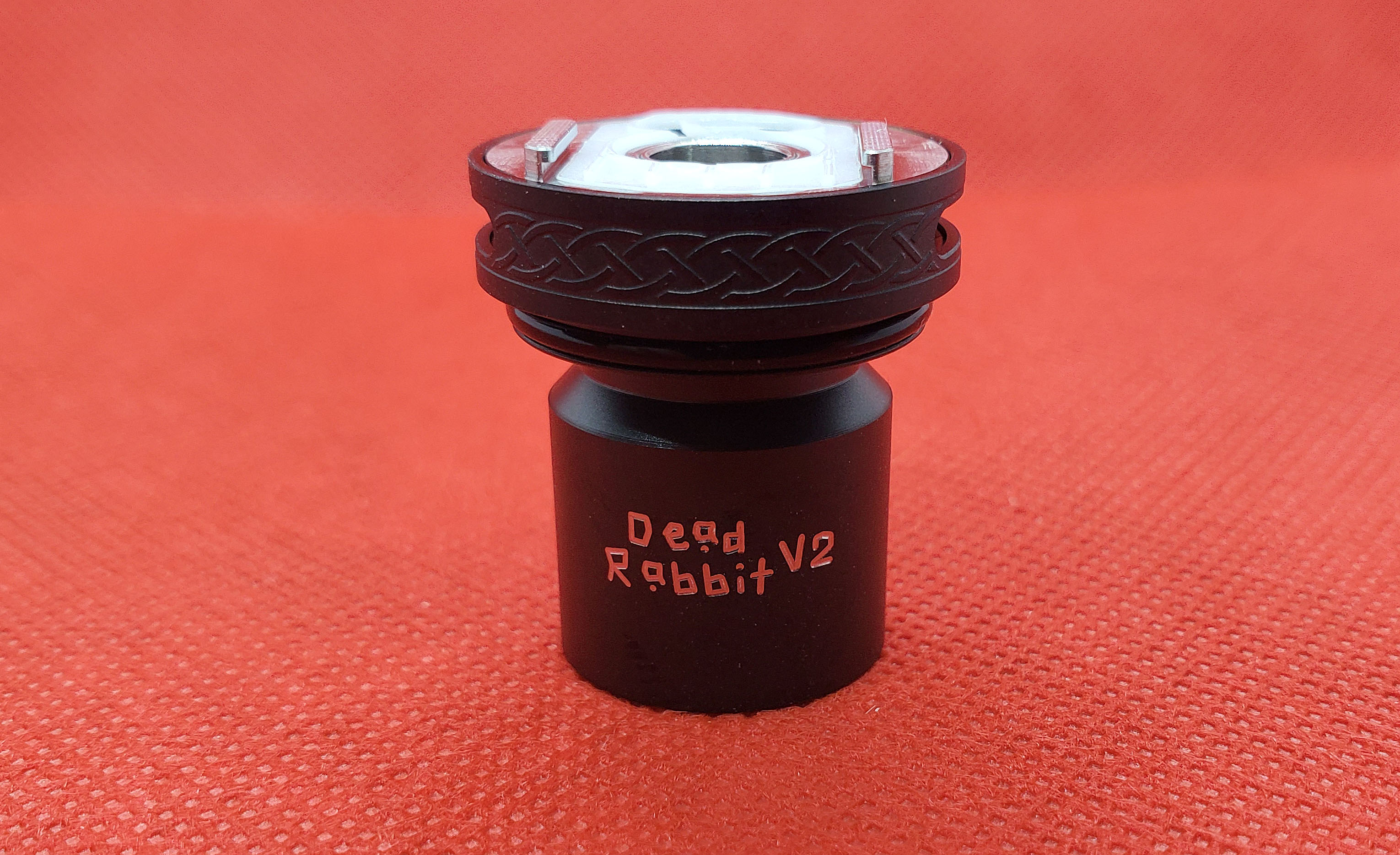 Dual airflow slots (one on each side) allowed good top airflow. 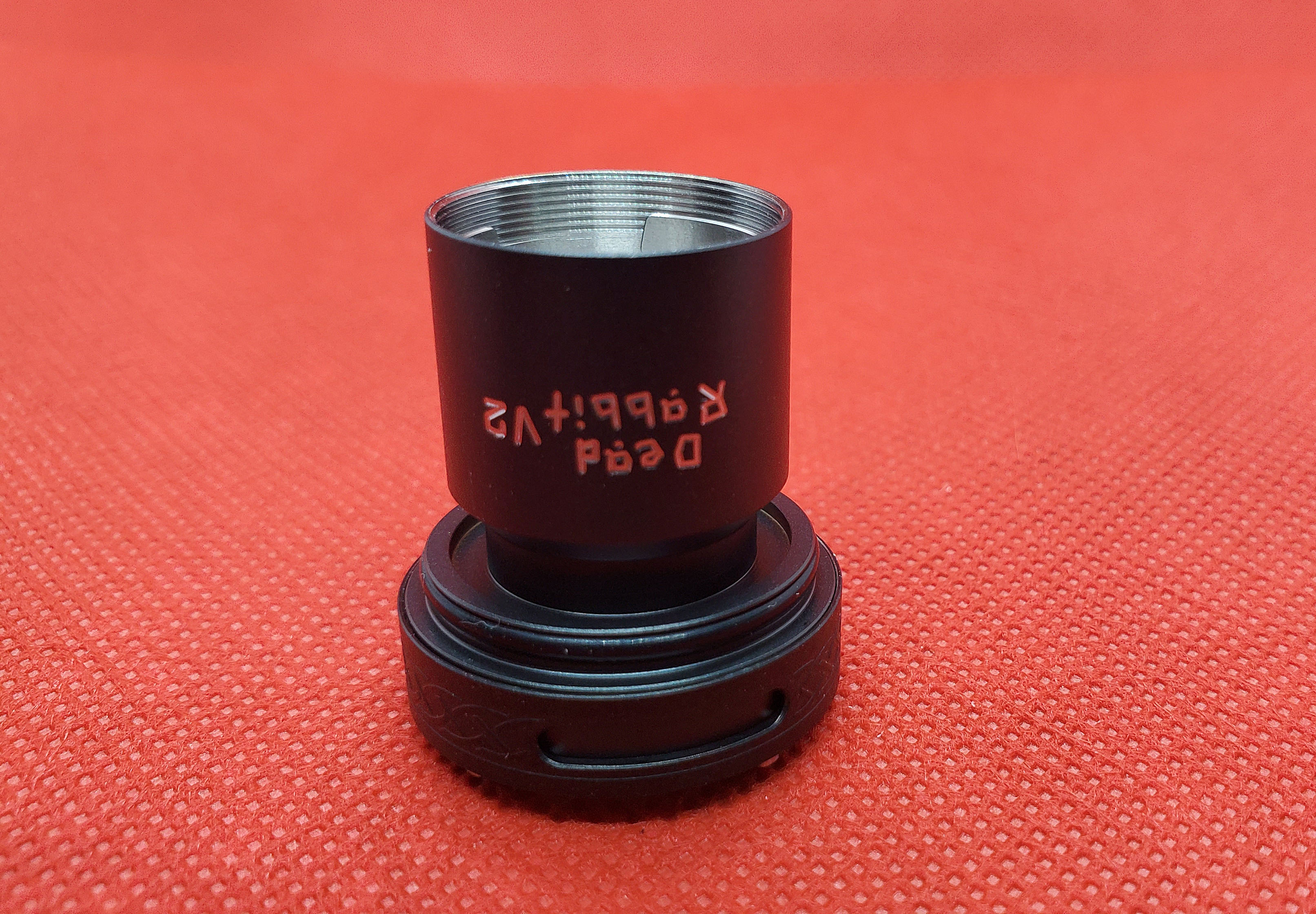 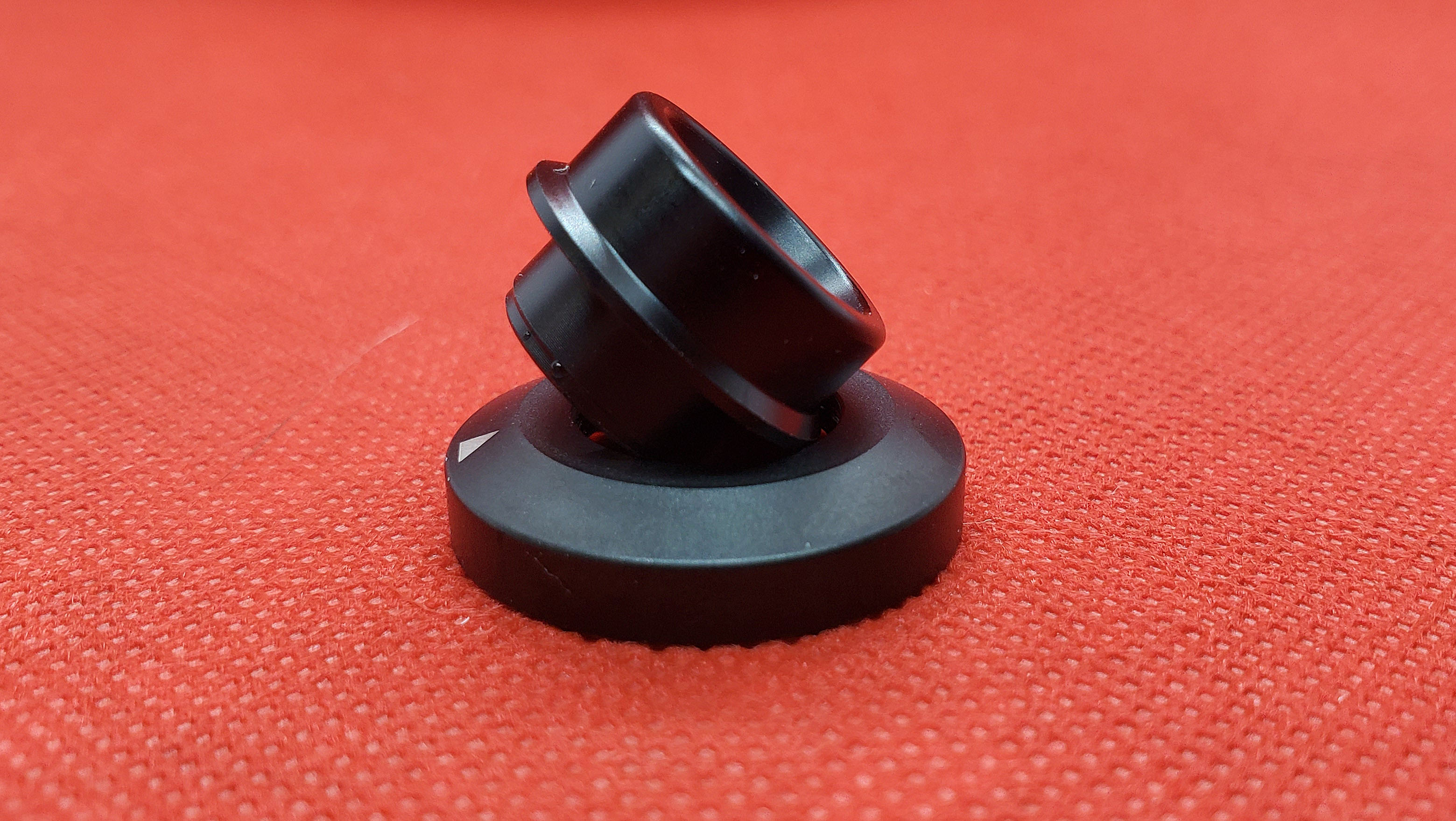 Smooth threads on the top cap and body. 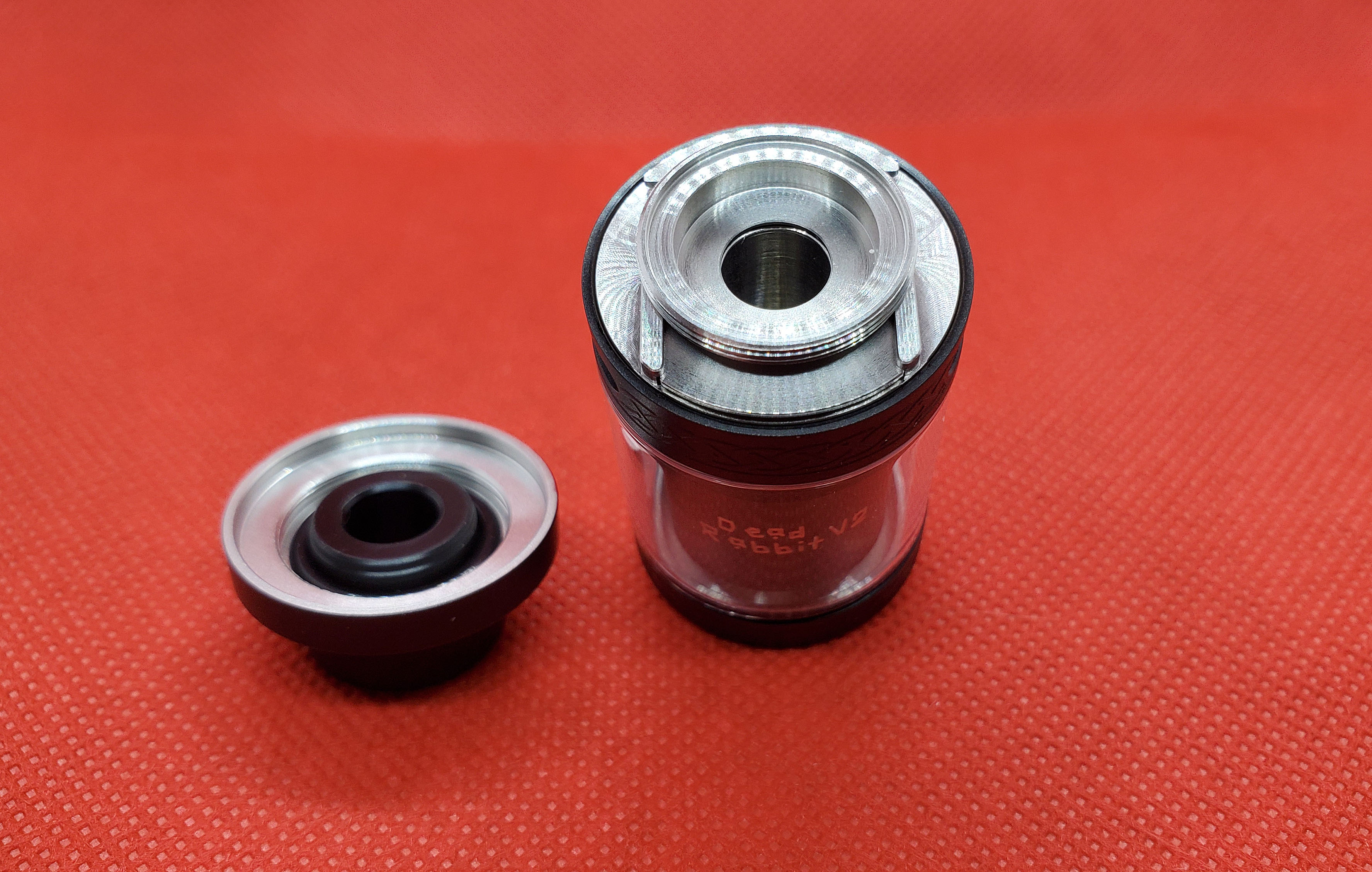 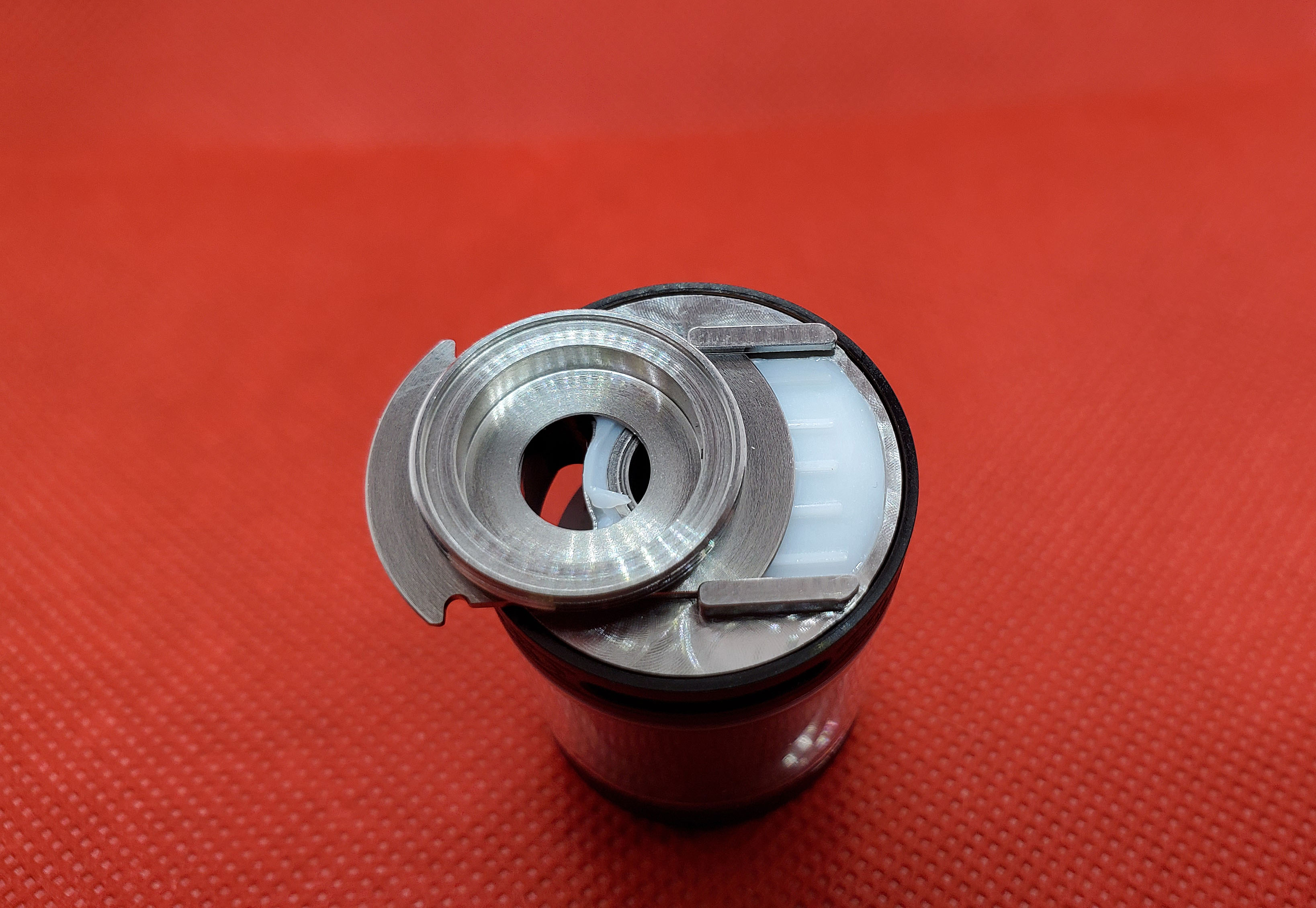 What’s not to love about a PC Thermal Insulation Plate ?

The dual dual post gold plated build deck was super easy to build on, AND, trim the coil legs under the posts !! 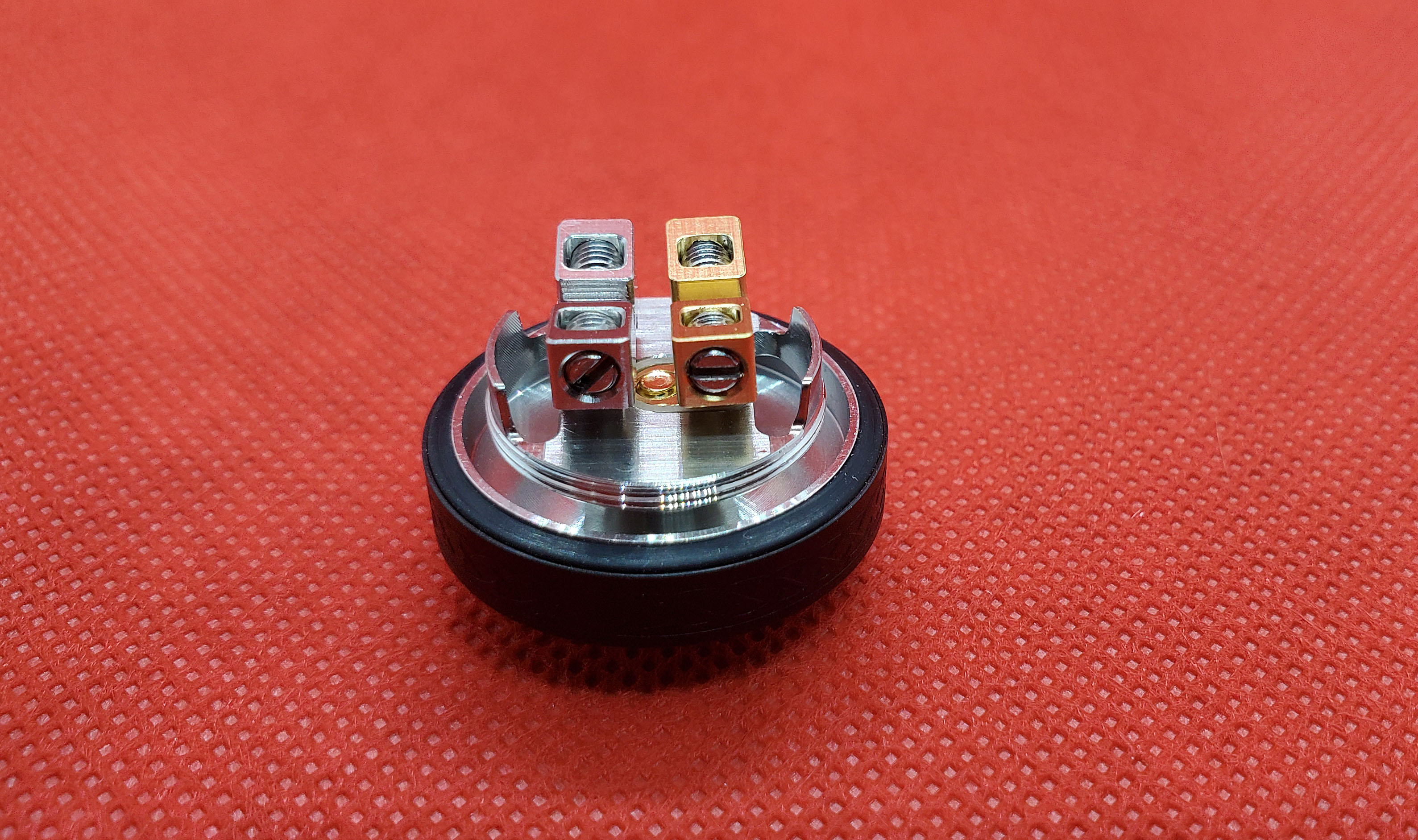 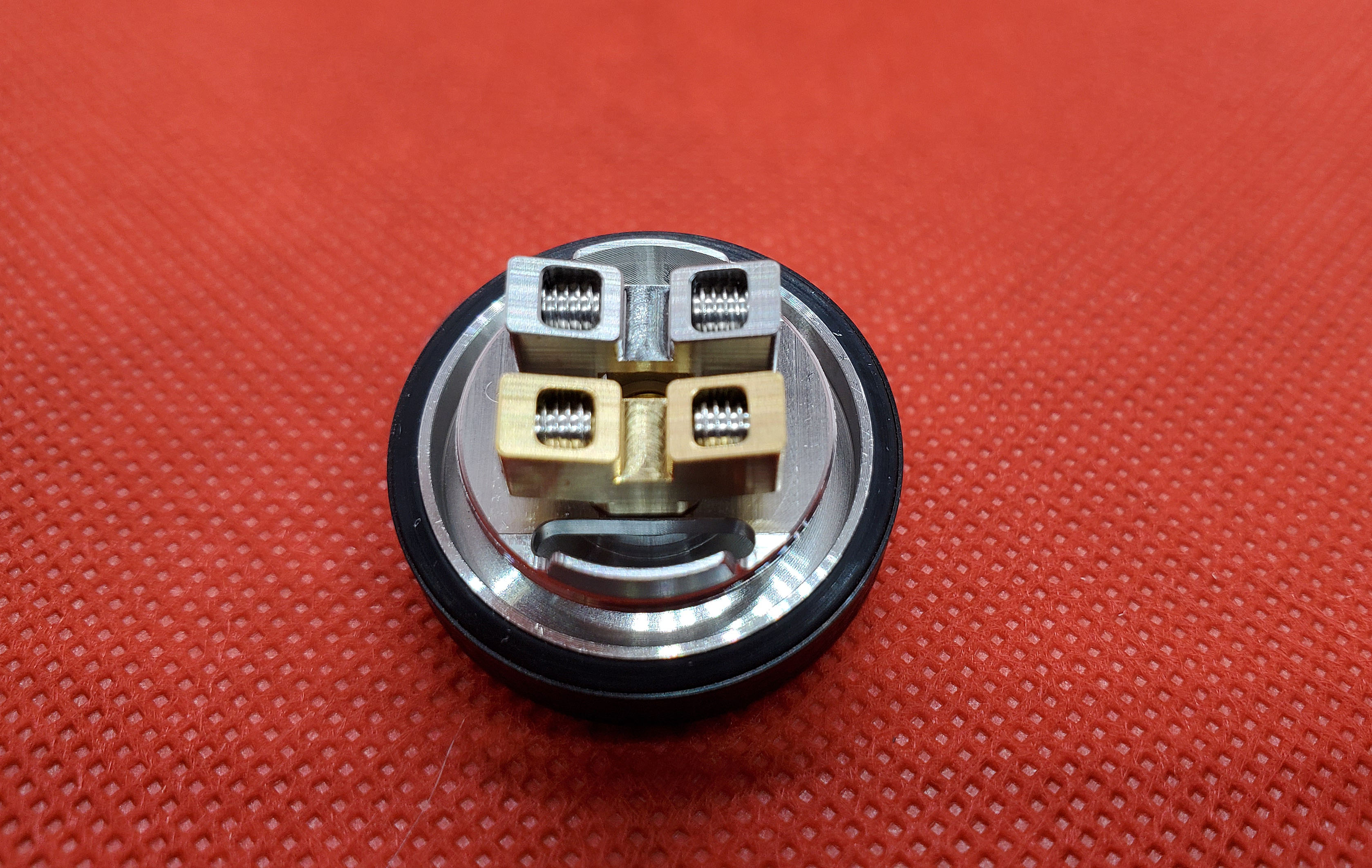 Specifically used some quad core coils to check and no issues with fitting or leg twisting upon tightening. 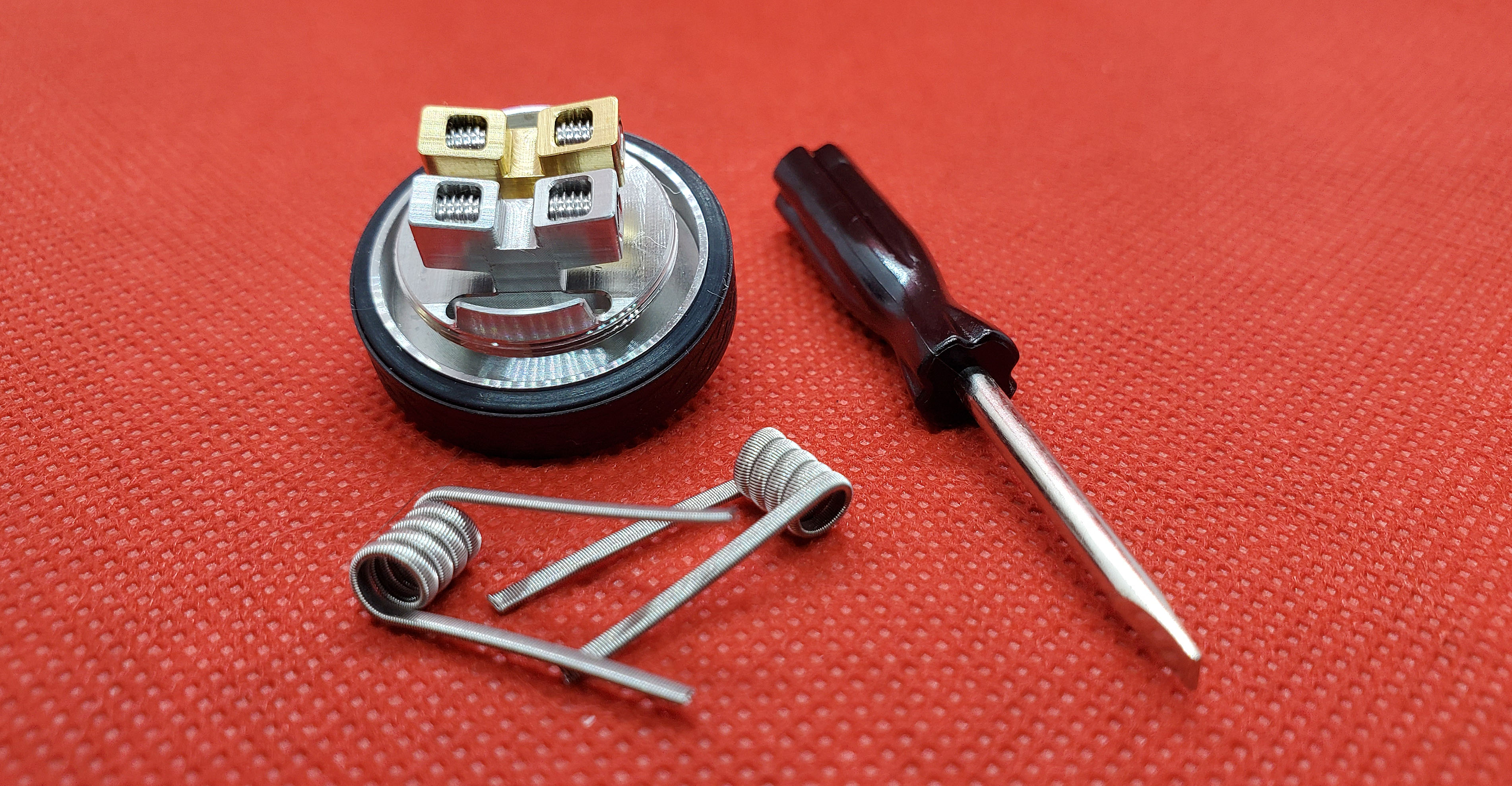 The installed screws were fine, but almost switched them out for the grubs. 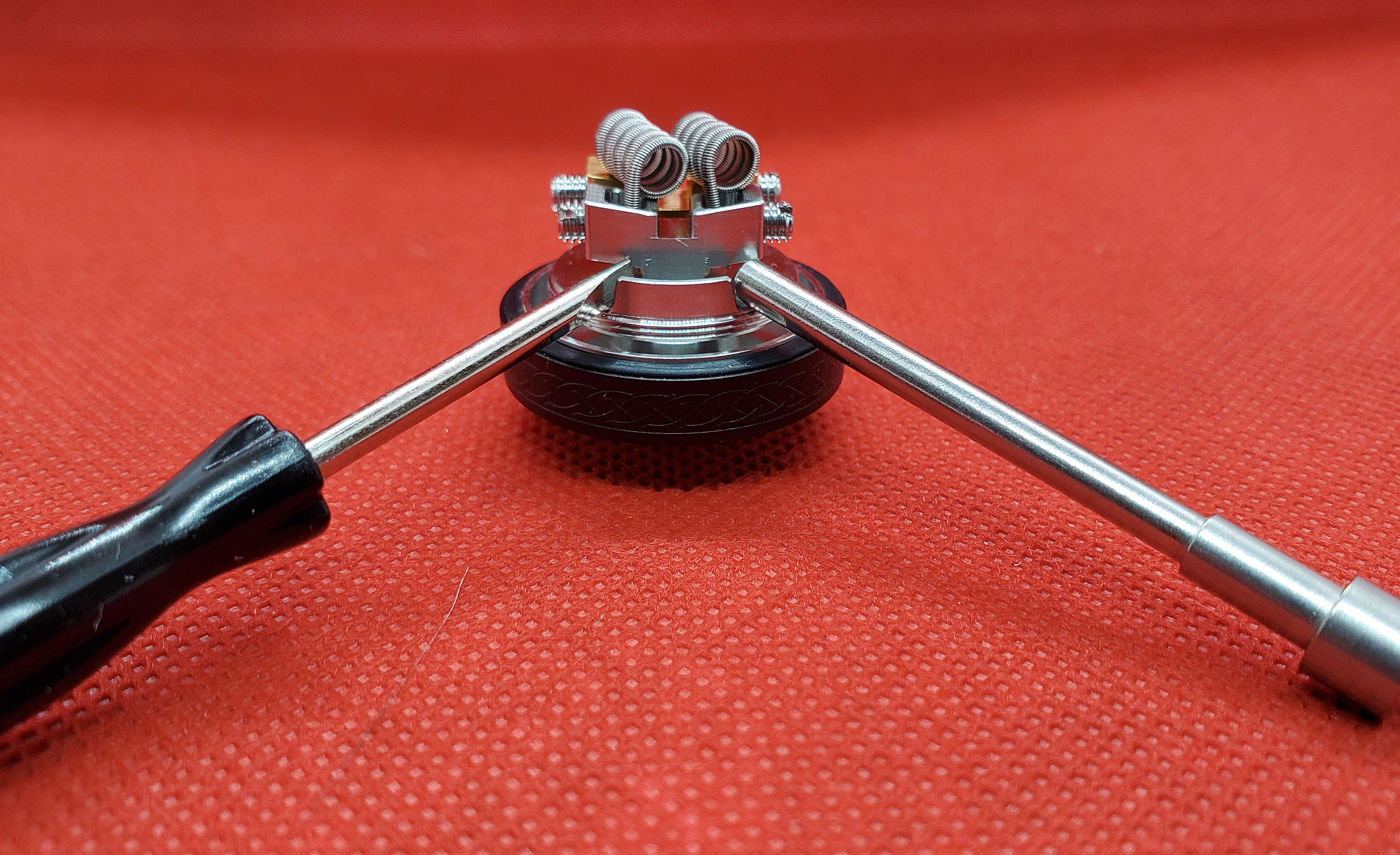 Made sure to keep the coils close to the deck to avoid any issues with the domed cap. 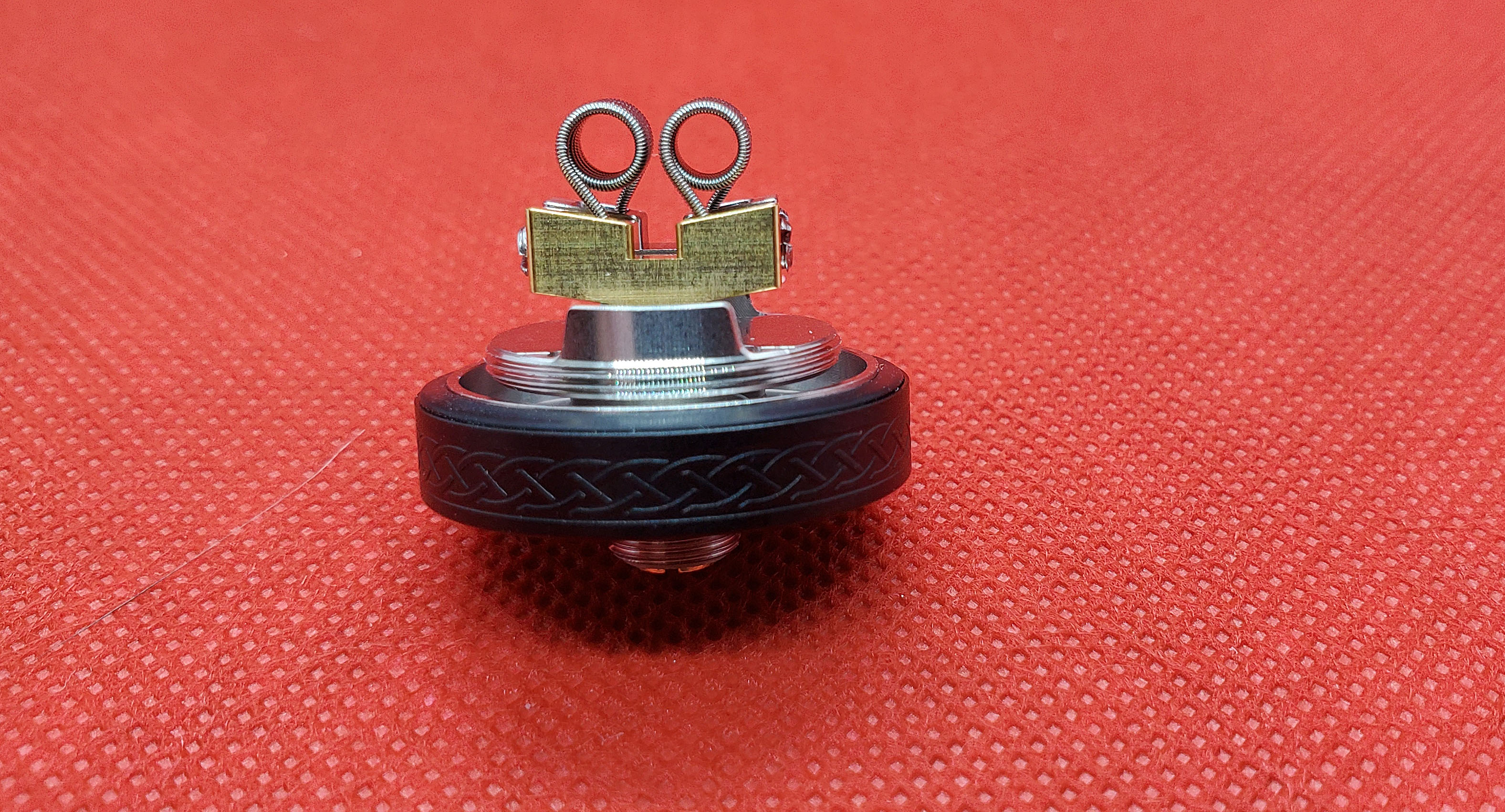 Minor thinning and topping of the tails to prevent packing, and the stop guide was nice in keeping the tails inside the cap threads. 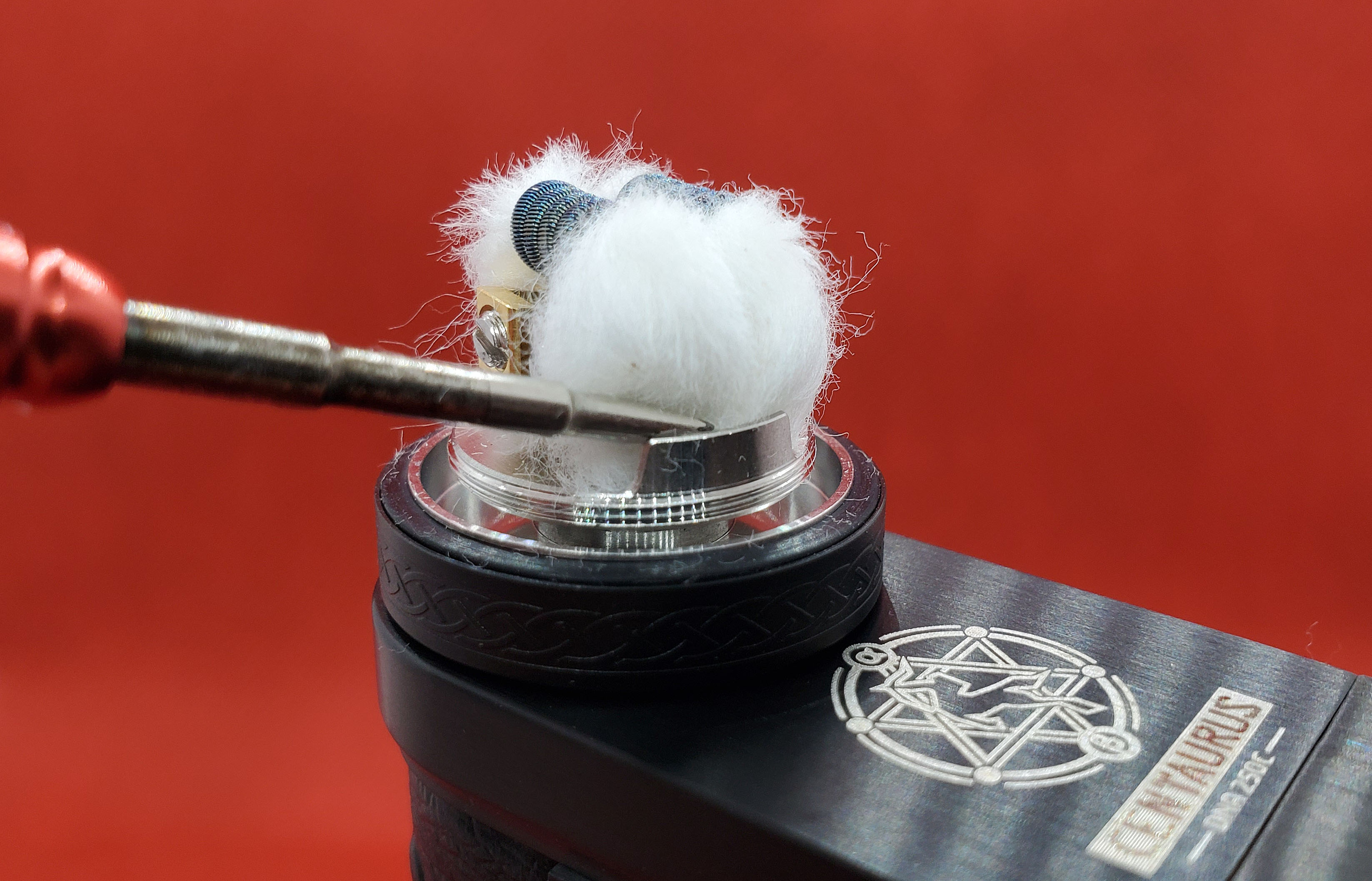 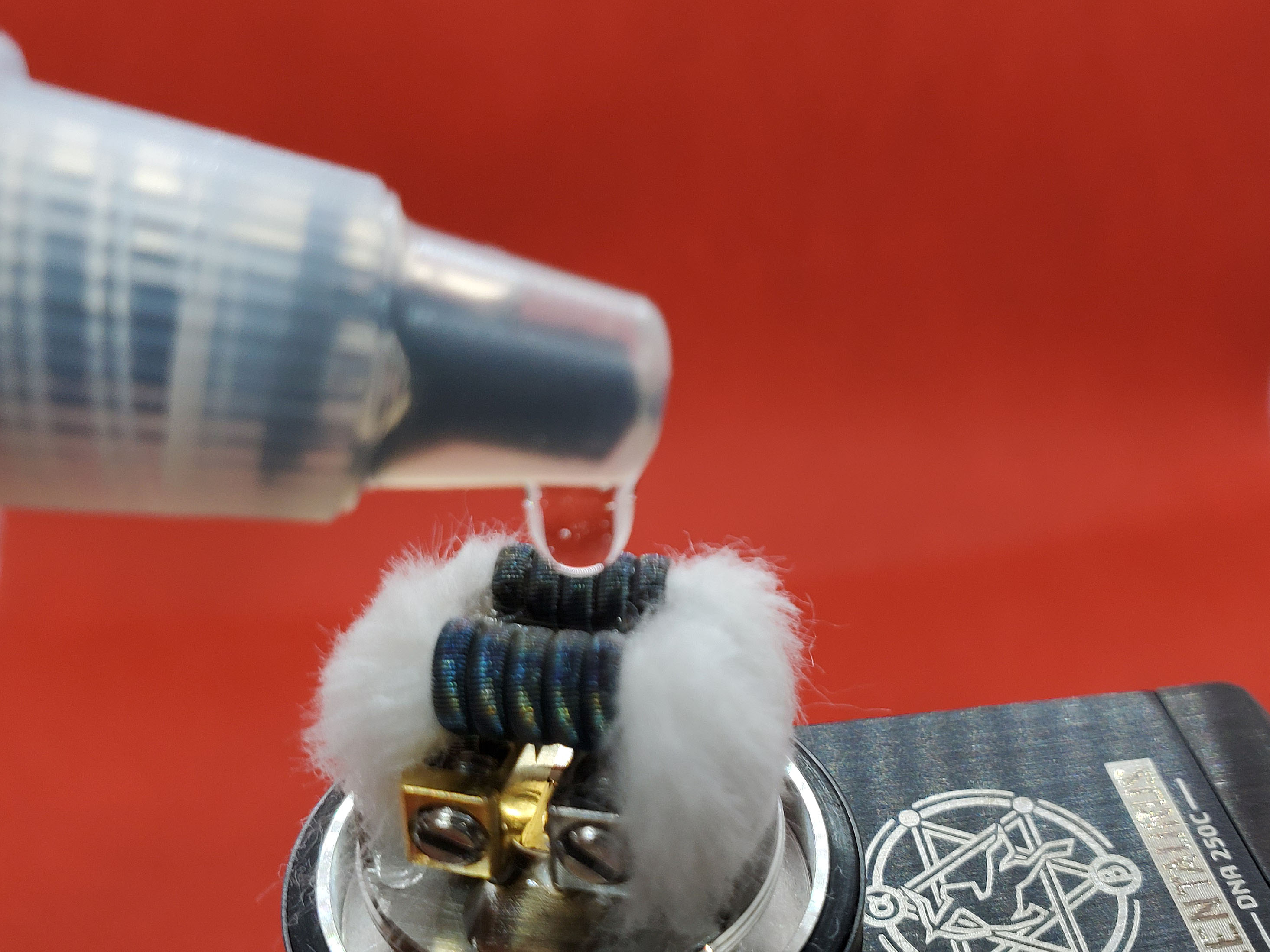 Although the fill slot was smaller than my cosmo tips, was able to slow fill without issue. 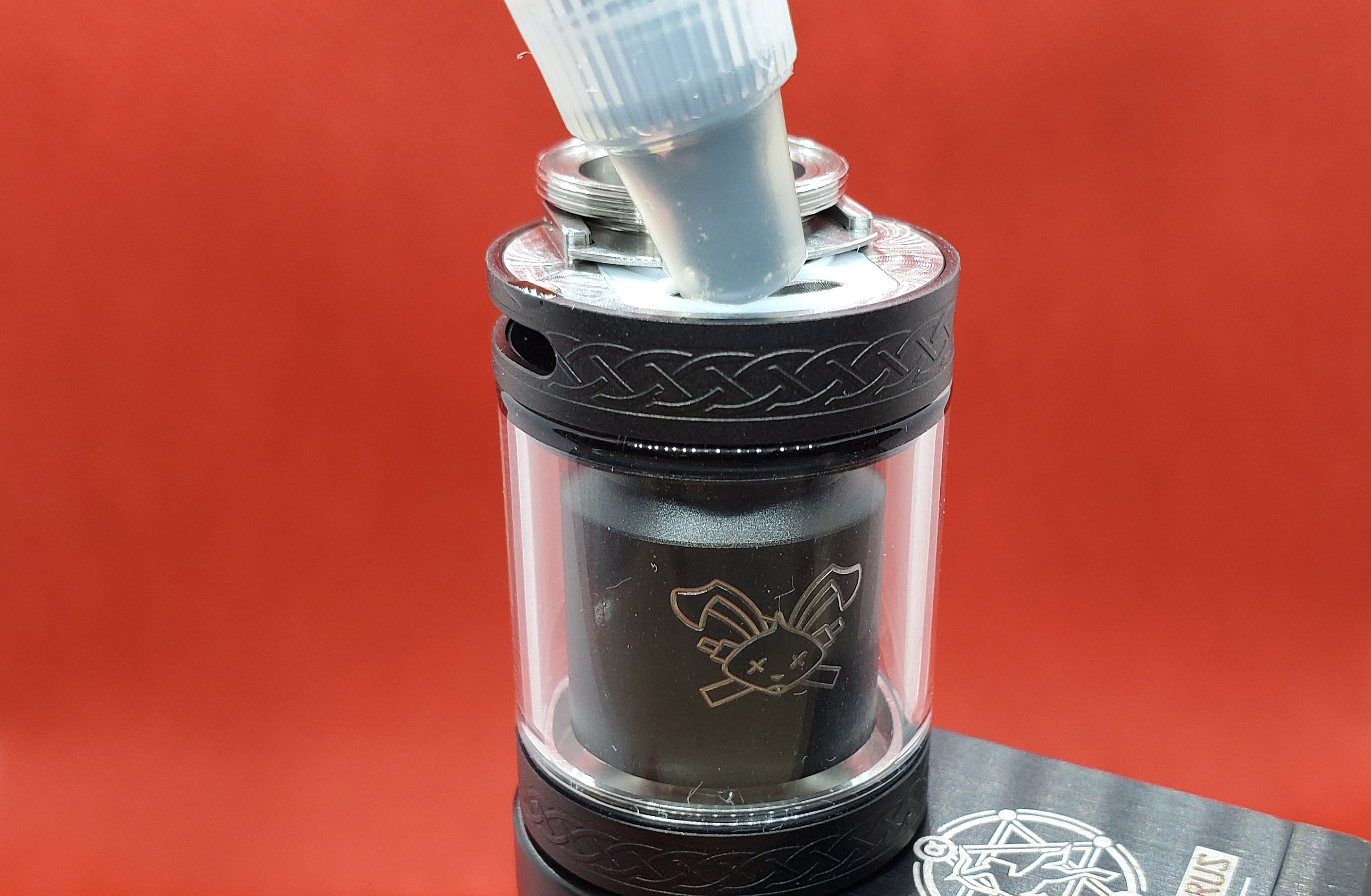 I had considered using the larger bubble glass, but once I saw how the flat glass looked, I stopped fiddling, and started vaping … 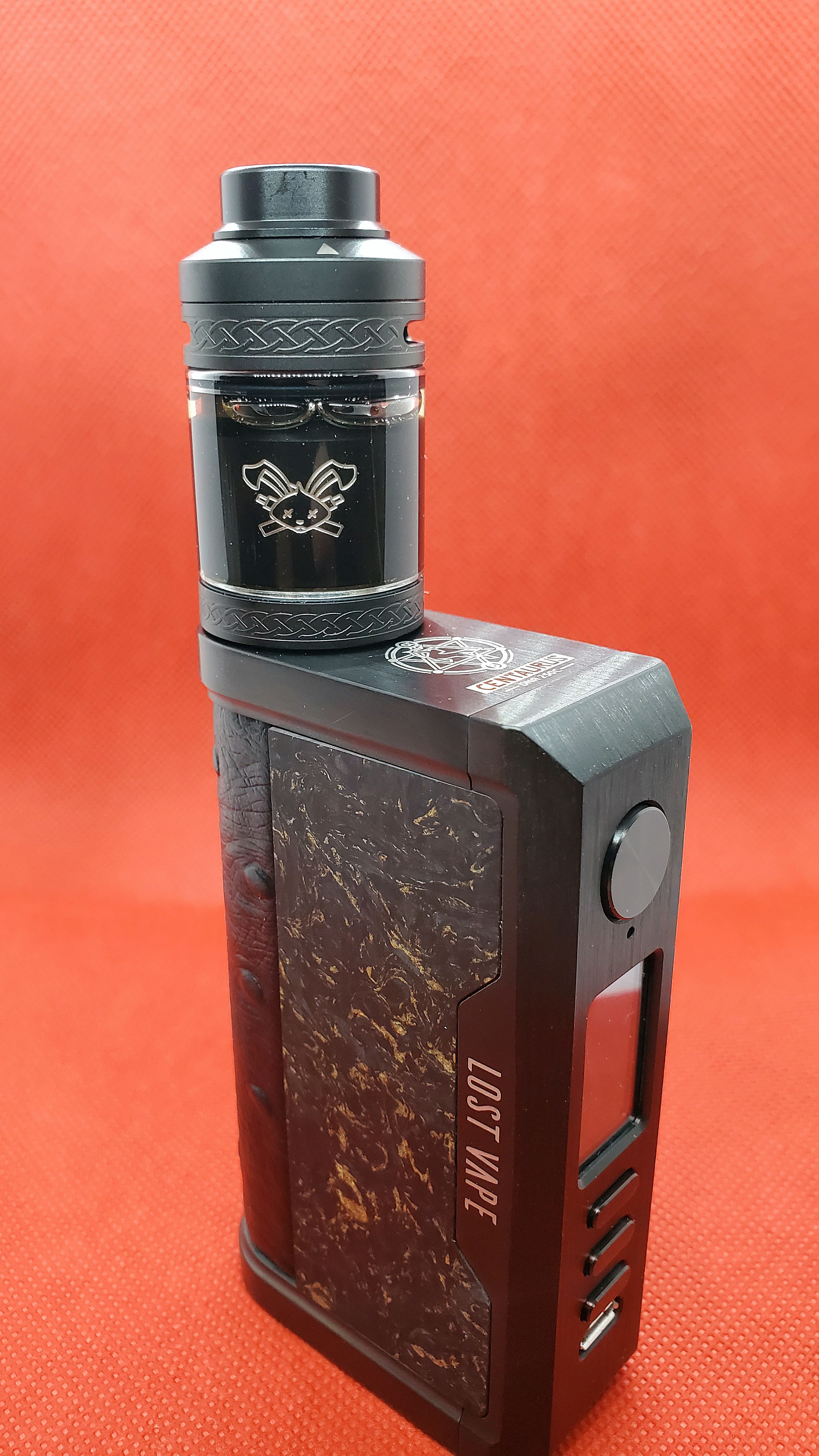 I have tried more than my fair share of top airflow tanks, and they always seemed to be lacking for one reason or another, most resolving around flavor production/representation, or lack thereof, so I really wanted to put this one through it’s paces, to see if the honeycomb airflow, and directed airflow at the coil(s) could overcome some of the shortcomings. I was actually surprised at how good the flavor I did get from this setup was. Tested my tried and true bakeries and custards, and even did an A/B comparison between this and my go to setup, and although this didn’t quite match it in flavor production, it was very impressive in the amount that it did produce. Flavors were spot on, and production was quite good. I typically left the airflow wide open for 65w vaping, and it was somewhat restricted. This actually seemed to work IN it’s favor, as it allowed for a more saturated flavor experience, and who’d complain about that ??

Having never been a huge fan of slide cap fillers, I wasn’t looking forward to filling it, and my cosmo bottle tips wouldn’t fit in the medium sized slots, but I WAS able to easily and cleanly fill on an angle, and filling at a reasonable rate. Not one drip, dribble, or dab. Threading was uneventful and the threads felt clean and easy to use, airflow ring was stiff enough to prevent accidental adjustments, but easy enough to turn, especially with the decorative knurling. The included 810 worked and felt fine, but when I removed it, the o-ring fell off from inside the cap ?? Apparently the tip gets inserted, then the o-ring gets put on from the underside of the cap. Not the best design, but as long as you know that’s how it is, then you know what to do. Did a few leak tests, flipped the unit on it’s side (and NO, I CANNOT do this with my regular setup), and no leaks !!! That’s a huge plus. 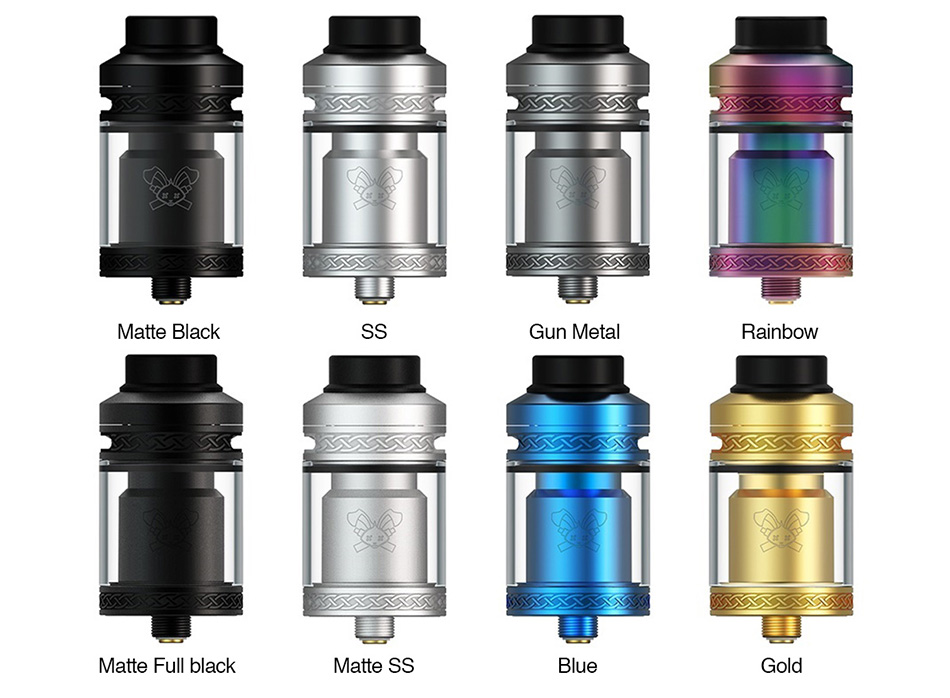 I went into this thinking I was NOT going to be a fan, as it had some of my “trigger” features, like top air flow, slide fill, somewhat restricted airflow, but honestly, I think HellVape did a great job on this, and overcame MOST issues that I’ve experienced with past top air flow tanks. Might not be the bestest best flavor tank, but with no leaking, easy building, great looks, and a small 25mm footprint, the saturated flavor it did produce was more than enough.

Thanks again out to Sue @healthcabin for the opportunity to review this, as it DID surprise me. Looked pretty damned good, with the small tank on the Lost Vape as well. As of this writing Health Cabin is having a Pre-Holiday sale with extra discounts.

Thanks for sticking with me, to the end. 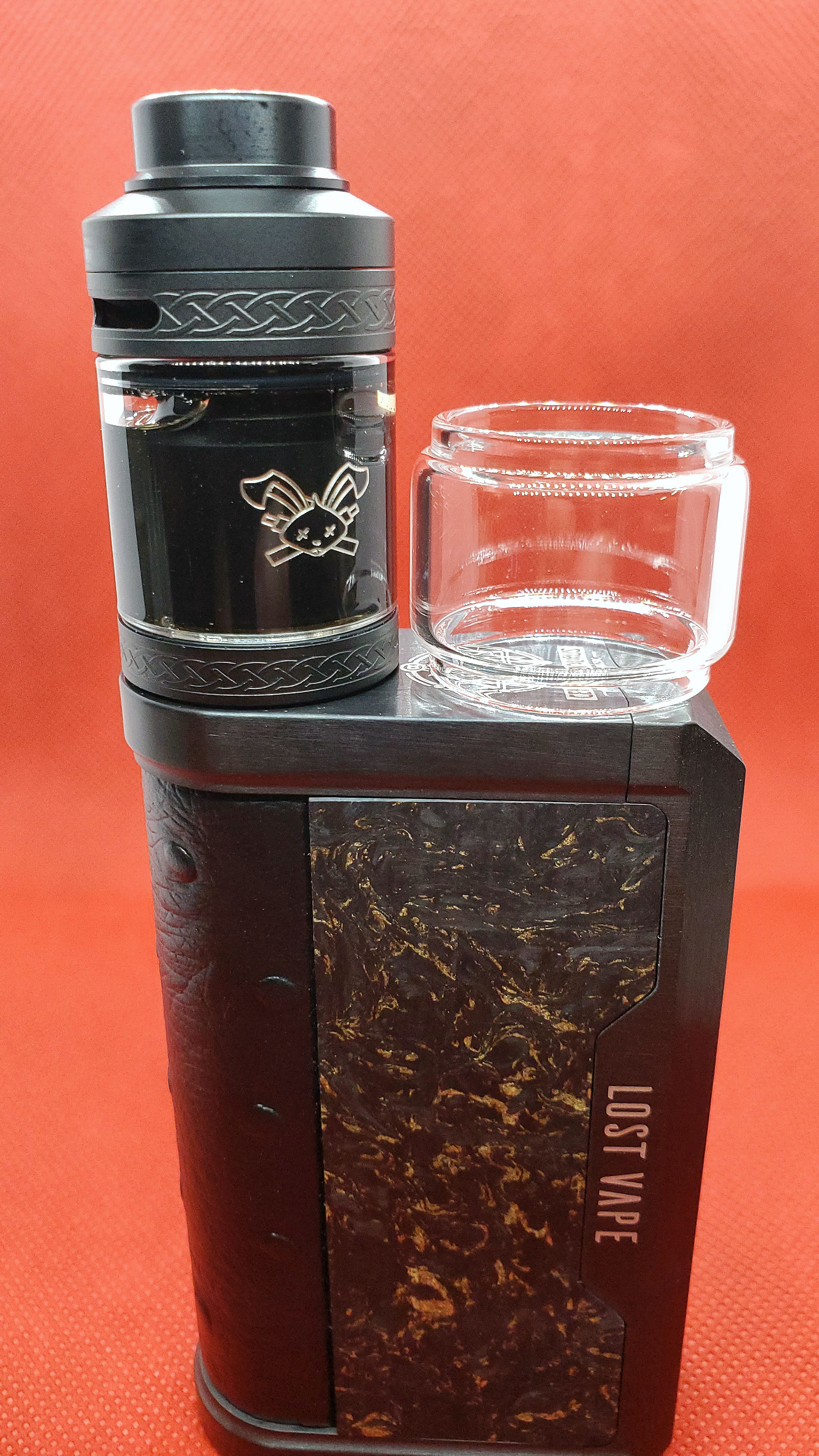 Thanks for your review!

Excellent review brother! I’m with you as far as top airflow. I just find them lacking. Good to know this is an improvement over most. A couple more generations and they may have it perfected.

Thanks @Stankhammer, and @Lostmarbles. I can’t tell you how many times I have tried, and been let down by top air flows. It really IS all about how, and where the air hits the coils, and they’ve all suffered for it. I don’t know if it’s the “honeycomb” air grid in the top of the dome or not, but when doing an A/B to my SC, I was actually surprised, and that doesn’t happen very often, if ever. Leak free from what I can tell.

Sounds right up my street SD, I am a great lover of restricted draw RTA’s, the Kelpie and the Pixie (RDA) being two of my faves, Singles, right enough but this one being a dual wouldn’t dissuade me from perhaps having a punt. My thx for the excellent review.

Y’re up pretty early for a Saturday SD. Even on the East coast you are 5+ hrs behind us…No ‘lie in’ Saturdays in the US​:open_mouth:

Y’re up pretty early for a Saturday SD.

I’m just wiping the sleep from my eyes and it’s almost lunch time in Bonnie Scotland​:roll_eyes:

Thanks for the review sd, very appreciated

Thanks very much @TorturedZen.

When do you talk to your wife?

Terrific photos and review. Thx SD. That’s the one sure benefit of top air, no leaks. I’ve had flavor issues with a few top air myself. Good to know this was a favorable experience.

The tank and mod look stunning together. Looks like they were meant to be

I couldn’t have agreed more @JiM210, thank you.