Disclaimer: This product was send to me by Heaven Gifts, as the winner of the Hellvape VP RDA giveaway.

VP RDA designed by VaporStuff Indonesia and manufactured by Hellvape.

This RDA arrived in a nice little box that was neatly packaged, all items were sealed separately and the accessories including a flat head screwdriver, a hex screwdriver, bunch of o-rings, 510 drip tip adapter, squonk pin and 2 flat head screws were put in two little bags, and placed next to the RDA inside the box. 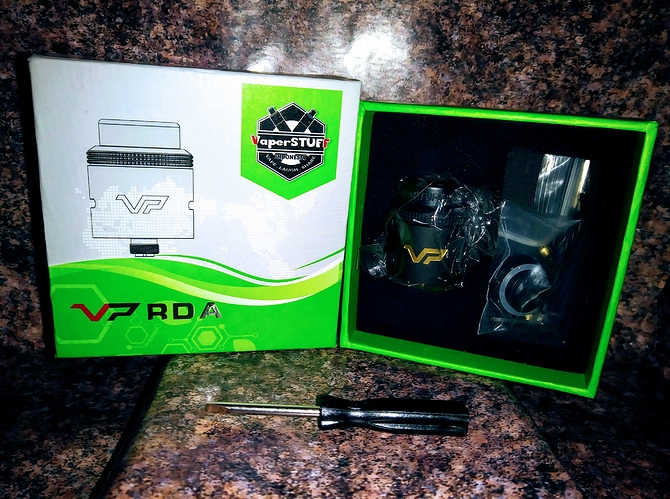 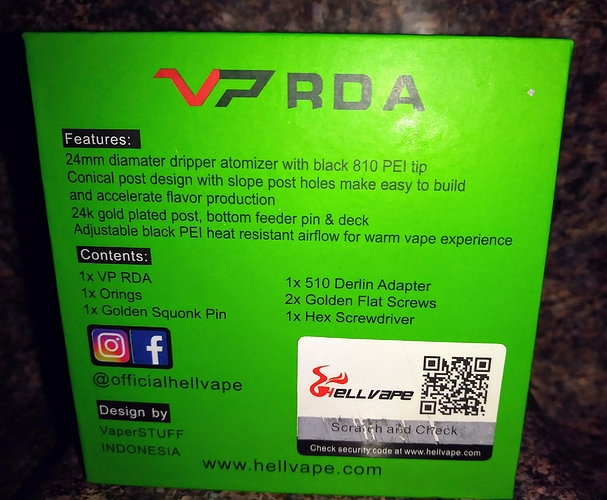 After removing the packaging I am presented with an 24mm RDA, that has a two post triangular design and a 24k gold plated deck. The post holes are set at an 45 degree angle, giving the impression of a slope. 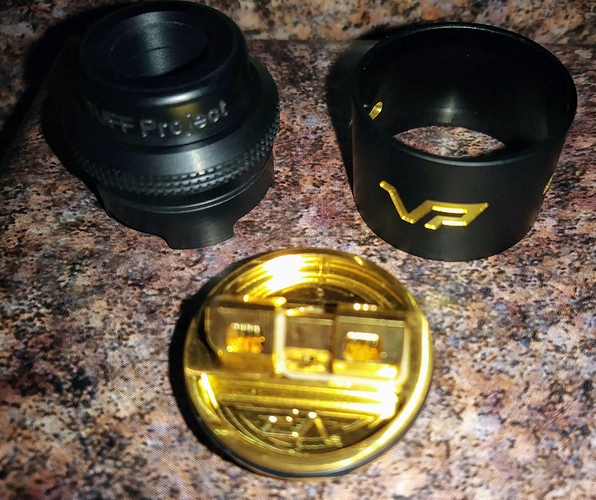 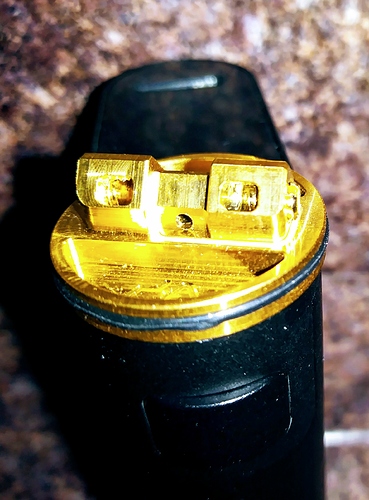 The middle post shows a small hole on both sides for squonking. This deck is a bit difficult to build on, because you will have to twist your leads prior of installing them into the post.

Since the screws are on the side of the posts, you will end up with twisted leads if you use any big coils that are flat, making it extremely tricky of installing the other coil or getting them to stay in place. To avoid this, bending your leads to either left or right at an 45 degree angle does help a lot and makes it less frustrating.

Due to its nature of having the post holes slightly at an angle, the coils have to be pre cut, its nearly impossible to cut the leads after both coils are installed.

The deck is very shallow and the small wells on both sides of the deck are very unforgiving. I tried squonking with this RDA but it was not very satisfying, you end up constantly squonking to avoid dry hits and if you’re like me, the queen of over dripping and squonking, you are more likely just flooding the deck and coils. On the bright side, it doesn’t leak and to no time did I feel that e-liquid would run out of the airflow.

This RDA can accommodate bigger builds and chunkier wires, however since both coils share the same post hole there are limitations that other RDA’s do provide with much less frustration.

I tried different builds and settled for quadcore fused Clapton’s (ss316l, 30Gx4/40G) 3mm ID, 0.15 ohm’s running on my drag at around 75 watts. I spaced them a bit since they are very close to my mouth after closing the cap. I could have used less cotton, but I wanted to show that this amount of cotton is nearly too much for the little wells. You can use up to 4mm ID coils with thinner wire but you have to be very spare with the wicking material, otherwise there’s too much wicking below the coils that would interfere with the airflow. 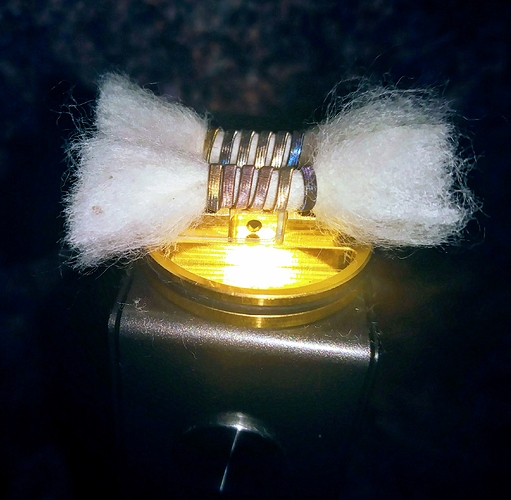 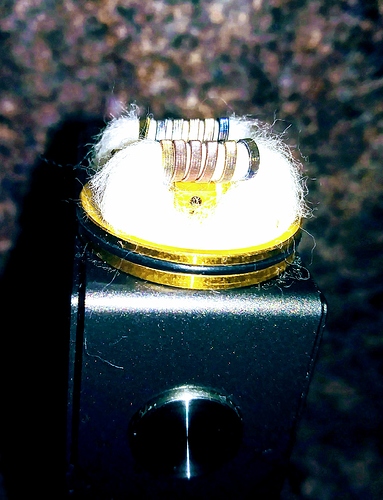 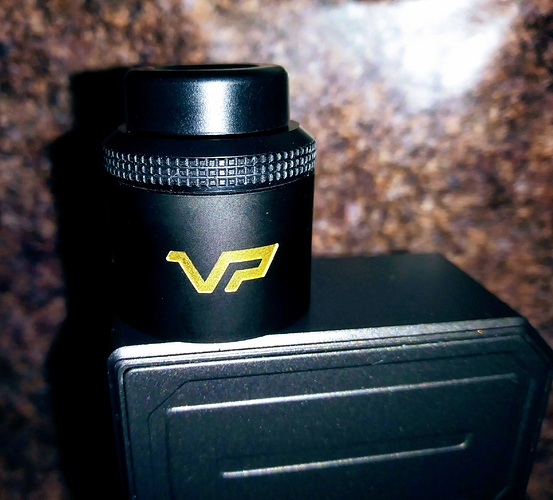 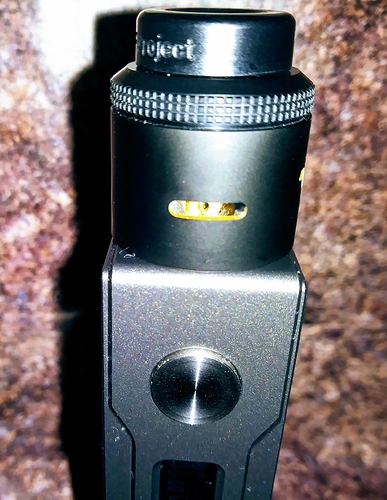 The top cap as well as the drip tip are made out of delrin, giving it barely any weight, the barrel is made out of zinc alloy with a matt nearly velvety finish. The logo/branding is deeply engraved on one side of the barrel. Unfortunately this does have sharp edges and so does the side airflow slots, be careful because you can cut yourself.

The Hellvape VP RDA can be used as single and dual coil, but it is more designed for dual setup. However its airflow does accommodate for single coil. If you spin the airflow once, both airholes are open. Turn it a bit more and one side closes but leaves the other one wide open, a third time and both airholes will be closed.

As dual setup the amount of air is great, not too much and not restricted in any way. But running it as single build even with one side of the airflow closed, this is way too much. You can not close it half way if you’re planning on closing up the other side, therefore you’re limited to one hole wide open or two holes half closed, either way it will have a unsatisfying impact of the flavor and cloud production when used as single coil.

Let’s talk about the flavor, if run as a dual coil the flavor is above average and in comparison to other dual coil RDA’s actually impressive, if you look at the material being used here. In general the RDA does look cheap and is extremely lightweight but it delivers in flavor. In single coil setup or with smaller dual coil builds, the flavor is unfortunately mediocre at best. There’s plenty and cheaper alternatives that are designed for single coil only, that I would rather suggest looking at than the VP.

ღ height of the RDA - its not too big but also not too small
ღ delrin drip tip and cap - this RDA gets warm but not hot like others do
ღ airflow - its the right amount of airflow in dual setup
ღ airflow options - I love options, who doesn’t? Compared to other drippers you have the option of both wide open, one closed, both closed, both half open, both open 3/4
ღ the matt velvety finish, that turns dark black when the dripper gets warm and returns to a lighter black when cool
ღ the build deck - after you figured out how to build on it, its not as tricky and rather simple
ღ the size of the deck - again I love options and this deck let’s me run bigger/beefier coils
ღ wide bore drip tip - I don’t have to pull the whole dripper apart but can just drip through the opening, the triangle post will distribute the e-liquid to both sides, rather than keeping it there and you would have to tilt it like other drippers do
ღ smooth airflow - no turbulences or hick ups throughout the whole vape, if you do not over drip or over squonk lol
ღ no leakage through the bottom of the deck or/and side airflow, even if not careful enough.
ღ flavor - subjective I know but worth mentioning for me, above average as dual coil
ღ warm vape - see description under the cons.

☆ the airflow slots and engraving of the logo are very sharp.
☆ the deck or/and wells are too shallow to actually be able to squonk
☆ Mediocre flavor as single coil setup - if someone advertises a product as single and dual coil RDA, you better believe that it performs equally good or bad in both setups, this one doesn’t therefore a con for me and the question, why advertise it as such?
☆ warm vape - I see this as pro and con, I personally like warmer vapes but not everyone does. Even with a higher ohm build it will be warm, due to the post design. There’s just so much limited space, that lowering the coils wouldn’t help much and then we would be looking at problems with the airflow or flavor
☆ the branding - yes it is a preference con but still a con for me. If you’re very forgetful don’t worry this RDA does have you covered. It starts with a stamp inside the deck reading “VP”, next the barrel does have that medium big “VP” logo that’s deeply engraved and gold plated, not easy to hide. To top it off the 810 drip tip does have a 3d stamp “vaporstuff” that depending on the size of your lips or pressure applied might be very noticeable and quite uncomfortable after a while for some.
☆ the small space between barrel and cap - again this will be a con fully based on the look, at anytime there’s a gap between barrel and cap that no matter how hard you try can’t be removed. It does bother me because every tiny particle gets stuck in there giving the impression of the RDA being dirty/not cleaned.

I don’t base my rating on aesthetics because then I would have to deduct points for color options, as of right now this RDA is only available in black with gold engraving, this might change in the future but I don’t know. The cheap look in general would get a minus as well as the drip tip not being offered in different colors and material etc.

So I’m basing my rating on the sheer performance, flavor, size of the deck, posts, airflow and my personal satisfaction.

Is it beginner friendly? No. People new to building or people with very little experience will have a very difficult time getting these coils installed. Sure they can learn but there are easier RDA’s available that are more forgiving.

Would I recommend this RDA? I am not going to answer this question, because I don’t know the person’s preferences and vaping style, or how many drippers somebody might already own. Its up to you to decide.

But I’ll answer this question, would I purchase a second one and/or put it into my daily rotation? Yes I absolute would.

If you liked my review and are interested in the Hellvape VP RDA head over to Heaven Gifts or click here
Apply code “AHG15” and get an additional 15% off.

Thank you for reading.

Thank you so much for all the kind words. Very encouraging maybe I write some more in the future lol

Great review @eStorm . Thank you, I enjoyed reading it!

you did a great job

thanks for sharing your views 🖒

Thank you for reviewing this device, This is a good honest review, good information