Help me devise a clone - Teleos Experiment One

I’ve been working on this for a while, and have had a few differnet renditions, but I was wondering if anyone wanted to help me work on a clone for Teleos Experiment One?

I mucked around with Kettle Corn and AP, but they didn’t hit the mark.
Once I found Cereal 27 by CAP, I started using it to form the corn base for the mix.

The description says that the original mix was meant to be a cereal, but ended up like a pudding, which has led me down the path of having a Cereal27 and Vanilla Custard rich mix.

Basicaly, the mix feels like a corn type custard (pudding) with some spice and depth added with the GC, as well as a bit of creaminess from the Vanilla Swirl. The Mallow is there only to add some sweetness.

Let me know your thoughts please

I made this representation of it back in Oct. for a friend that loved it. I never tried the stuff but made this based on their most accurate description exactly as you tell it. It may not be perfect but maybe it’s something you can work with at least. I never did post it because I was never sure of the profile so I guess I didn’t delete it because the recipe was waiting for you… 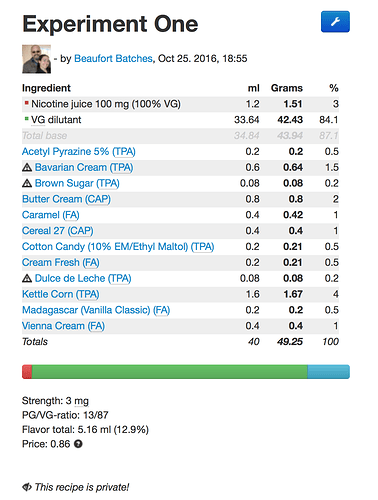 What is the PUR abbreviation? Ive not heard of it.

@Beaufort_Batches - yours is the one I tried on ELR previous

Nice mix, and likely elements there that will fit the profile.
I think I may have to add butter Cream to the mix!

This one turned out pretty close to experiment one if I remember correctly. 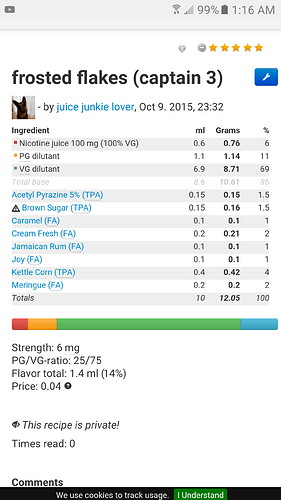 Awesome, Im going to take elements of the above and mix them into a cereal27 mix

Ill give that a mix up @juice_junkie_lover as I have not seen it before!.

And see how that goes

What is the PUR abbreviation? Ive not heard of it.

It is Purilum (PUR) from Nicotine River.

PUR is Purilum Flavors by Nicotine River I think, I don’t know what else it could be.

Would love to hear your feedback on it. I pretty much found it on Vaping underground and made some changes. I was super happy and felt like it was pretty close to experiment one! Kettle corn and jamaican rum are a must for it though! Let me know!

Ok, the one I “devised” above from the other recipes is garbage so far. I knew that 1% Joy would be pronounced, but it is pretty much dominating the whole mix right now. It is like vaping bread-mix.

I haven’t cracked open the other one yet @juice_junkie_lover

Cool. Can’t wait until u try it! I mixed a 10ml of it the other day to make sure It was ok. I’ve already vaped it. I’m pretty sure the jamaican rum is what pretty much helps it blend. If I mix it again I would probably raise jamaican rum to 1.5% and lower the AP to 1%. I might even raise the Kettle corn a %. It’s pretty good as is though. I’m pretty sure I found that recipe on VU. Just want to make sure you know I’m not taking credit for it.

While this recipe has stumped me for ages, just a note. Cereal 27 did not exist when exp one was released. While it seems like it could be a short cut to getting a very similar recipe I feel like Cereal 27 and vanilla pudding flavour could be a good start

Keep in mind telos Exp One was never intended on being a corn pudding style recipe but was intended to be a cornflakes when they where creating it. Just things to keep in mind

While mentioned above that Cereal 27 did not exist when Experiment One were made, I’m thinking Sweet Cereal Flakes by TFA. Then again I’m not sure that existed back then either

Never tasted the juice you are trying to make here, but for the spice I would replace GC with sugar cookie at 2% and 0.5 CDS, heck even lower for that faint hint of spice… then again, never tasted the juice, just trying to brainstorm something out. Remember also, back then usually the aroma % were higher than what we see now. Due to equipment evolution etc.