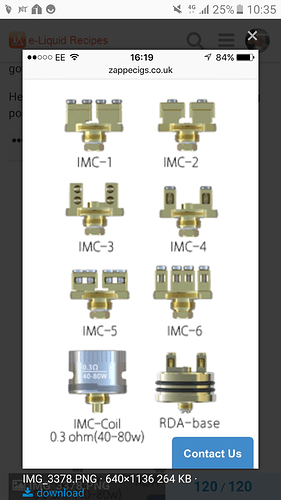 Can i recommend you watch some coil building tutorials and wicking on YouTube. It will give you a good feel for it.

Search for coil build tutorial. In regards to the IMC they are different “decks”, post configurations to say. They allow you to build yes, 2 coils “dual coils” for the most part. BTW there are also single coil "decks/attys in the market too.

I could recommend the ijoy combo if you have already started leaning that way. I have one it comes with 2 decks in the kit. Which for me is all I need. It will be a great intro into coil building and wicking too. After that watch out you’ll want more, much more.

I suggest that you start building on Velocity style decks (IMC-3 above), as they are the easiest decks to build on. Once you master that, which is pretty easy, you’ll find it easier to build on other style decks.
I wholeheartedly agree with Volition, Youtube is a great place to learn.
Coil building, especially basic coils, is much easier than a lot of people think it is.
As long as you haven’t got 2 left hands, you’ll be fine.

I’ve not yet encountered a deck style that cannot be worked out rather quickly once you have it in your hands. Obviously the first couple of trys you are coming to grips with it. Most decks are much a muchness in regards they all require an initial getting to know you stage.

The velocity style is one of the most popular so is a good place to start as mentioned. The iJoy combo gives you the velocity style that @benjy337 mentioned and also the imc-2 clamp style. Maybe you can get your head around a couple of styles, which is a plus.

We all stuffed up and fumbled around at first. Well I know I did. It’s a fun aspect of vaping and you start learning more about coils, wicking etc as you go along.

The most important aspect at first and hardest thing to master is wicking. But once again it also won’t take too long to learn. But each tank as you’ll find will have its own nuances.

Everyone here is great at giving out sage advice & fixes, so if you run into any problems post it up. I hope you enjoy your first foray into RTA’s/RDTA’s

Personally, it was a revelation moving from stock coil devices. Then there were RDA’s but let’s not get ahead of ourselves.

Let us know how you go.

Ditto per above. I’m pretty new at this and I find IMC-3 style decks are the easiest for two coil horizontal builds. You can try different searches on google like “vertical RTA coil build”, “three post RTA coil build” etc. to get a flavor for more possibilities. There are even videos on “art coil” building with all kinds of exotic coils and builds. IMHO, pay real close attention to how folks do wicking. That is an art and specific to each RDA. Each build has a wicking technique that is a sweet spot between hitting dry and flooding. After awhile you will get a feel for how each deck will wick per it’s design.

The velocity style deck is pretty versatile too. I’ve successfully used that type of deck for single, dual and quad coil setups. Sometimes the wicking can be a challenge if you’re using something other than dual coils but it can usually be done.

So how would I do 4 coils etc

It’s the same principle as this.

Exactly like the video @DrChud posted. For a single coil you would just have the coil between the two posts. If I were you I would just stick with a dual coil (1 on each side of the posts) for now. I only use regulated mods as well, and have never had a problem with any coil I’ve made. Just make sure both coils are exactly the same wish mine looked half as good, lol. time and practice, oh and patience this for me is the most important part.

If you follow that youtube video and do what he says it’s actually pretty easy to do. Just take your time with it.

I thought it would be fun getting into coil building a few years ago and I bought a ton of kanthal, a toolkit, and a ton of cotton and then I watched a few dozen youtube videos and made some coils. Fast forward to the present time, I find I’d rather spend my free time doing other hobbies and mixing juice so I actually pick up a 10 pack of premade coils off ebay once every year or two. Coils last a very long time, you just change the wick out each time you change flavors and keep the same coil in there for months if you want. I pay around $8 for a set of 10 fused clapton coils that would take me an hour or two to make on my own, and I don’t end up with raw fingertips. I only use my RDA for flavor testing so some nights I’m changing the cotton several times a night, if this is your plan just make sure you get a big bundle of cotton - it’s super cheap.

Uhmm … OK so I just read somewhere else in the forum that you can build coils that are sub-ohm? How? I thought that if you built a coil, you built a coil. I didn’t know you could build sub-ohm coils. How would someone build a sub-ohm coil? Is it different wire or a different way to wrap the wire? I’m so confused

The thicker the wire the less resistance it has so if you want to build a coil that is under 1 ohm (sub ohm) then you use more or thicker wire in the build. You can also decrease the ohms by doing parallel coils (it will cut your ohms in half).

Have a look here http://www.steam-engine.org/wirewiz.asp it will calculate it all for you

OK so now regarding ohm to watt…I built my dual coils and they are at 0.43 ohms according to my mod

So what’s the highest watt or voltage it can run or recommended to run?

Or is there a way of me finding out via a table some how?

Or even what’s the best ohm I’m supposed to be going for ? I know these are noob questions but better ask and learn than blowing my self up

Is it as regulated mod?

If so the device will do it all for you.

Ohm's law calculator with real-time results as you change volts, current (amperage), resistance or power (wattage). The fields can be individually locked.

I only use my RDA for flavor testing so some nights I’m changing the cotton several times a night,

I never re-wick between flavors on my tester, or my rda’s I keep on my desk. If I don’t want any of the previous flavor to influence the next flavor I just drip a little 0mg unflavored on it and take a few pulls… I hate re-wicking