Everyone here will agree:

Shop around for those exact batteries. Somebody will have a sale going on…

Thanks I am currently looking at these will they be ok 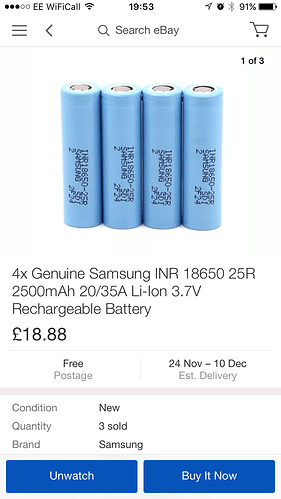 I buy from nkon.nl - it seems cheaper as well (and it’s with the newer wraps)… 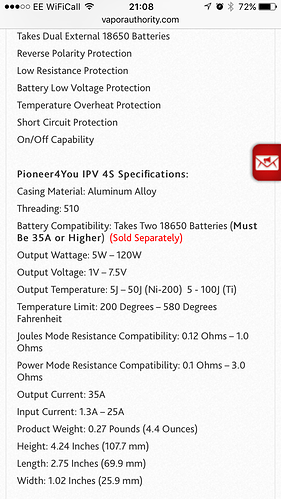 I realized I need to to clarify this. The 25R and HE2/HE4 can continuously discharge at 20A without problems, they can pulse a good deal over 35A. In the IPV 4S the batteries are put in series which doubles the voltage, keeps the amp ratings. If they were put in parallel the voltage would be unchanged but the amp ratings would be doubled.

I have made illumn my main battery shop for a few reasons, mainly they have fast shipping and good prices plus free cases. I have switched to the he4s myself, I find they perform just a touch better than the he2s. Either way like everyone has said, stick with sony/LGs and no rewraps

I’ve bought a few HE4, and I’m very pleased. However, Mooch’s tests reveal that the 25R’s are slightly better - Just sayin’

I just got new batteries a couple weeks ago. Sony 18650 2600mAh 3.7V ordered from elementvape for around 13$ each. They are awesome. Such a difference in power, taste, battery life. I love these batteries. I also read reviews that said their life was long.