So I keep seeing a lot about vertical coils having better flavor and airflow compared to horizontal. The main issue I keep seeing talked about, also, with vertical, is the upper portion of wicking seems to dry out and roast fairly quickly… I am just curious what you all think. What is your preferences and why?

For me the Horizontal is easier to make and install and I like the fact that I can see both ends of my cotton. I have used verticals ,especially in the Aromamizer , that worked great but they are a pain for me to replace the cotton.I do think they can help with airflow as they don’t block as much but it really is a preference thing.Both have good points.
I think part of my personal feeling towards vertical coils is it reminds me of the genesis tanks and like @Kinnikinnick my left eye starts to twitch!

Sort of unrelated question (related in the fact I would need to do vertical to fit it…)…, I noticed the issue of no room for the screws when using thicker coils… Would replacing the M2.5 3mm with 2.5mm work better? I have some twisted 22g Ti coils made up that I just can’t fit because I can’t get the tank back on with the screws sticking out so far…

Horizontal for me. 2 tails wicking instead of one is a no brainer for me. I need all the wicking I can get.

You don’t want to do that unless it’s a single coil setup. Your ohms will be too low. If you twist Ti, try 28g or better.

I’m sure those coils are huge.

Yea I was just going to do one for bout .08ohm…
Decided to try my serial dual with the Ti instead. 4 wraps on each section steam says .14ish? probably 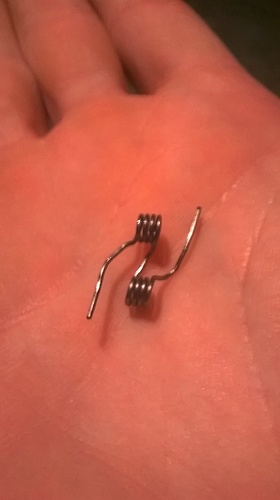 Like the others have noted above, two tails’ wicking will always win over one tail hanging down. That said, I did a lot of verticals when I still used my KFL+ (remember the good ol times?

). Wrapping the wick around the coil and hanging the rest down the side of the deck was really efficient for wicking, better than horizontal with 2 tails - but a big PITA to change.

I get confused easily when people say things like horizontal coils have better flavour or verticals have better flavour - per se. That’s the problem: it depends on your atty and what you’re looking for in performance. For instance, a vertical coil with wicking around it and airflow passing through its middle will have a condensed vape - if you like that, then it’s better than a horizontal. If we’re talking about side airflow, there can’t be any difference between horizontal vs. vertical, except for wicking capabilities and there, the horizontal will win.

My 2 cents, your milage may vary