How is Mother Nature treating YOU?!

I know I’ve lived in New England all my life (Massachusetts) USA but yesterday was 65°, sunny and beautiful! Today we got 4” of snow, that’s now turned to freezing rain and the area will be a sheet of ice tonight. 6am when I’m headed to work will be a “feels like” of 13°! I

Where are you at in the world and how is Mother Nature treating you? 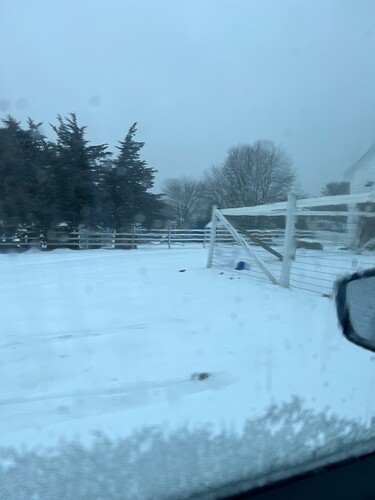 We had Snow twice this week in Wa State …We barely get Snow so having Snow at end of Feb is like hmmmmm.

Had a lot of ice this morning in Delaware.

Denver has been super cold (broke a 100+ year record) and have about an inch or two on the ground. They predicted 6-7 inches, but it got too cold to snow much. I think we broke the record for snow in February, but we still haven’t had a good snowfall of 16-18 inches this season. But it could happen in March. Animal control has been picking up dogs that have been left outside, for which I am grateful. For people that leave their dogs out in sub-zero weather, I think the consequence should be spending the night outdoors in shorts and a tee shirt. My attitude is why I could never be an animal control officer…I’d probably end up in jail for how I would treat abusive pet owners.

We didn’t have any proper snow in a long time in Germany. It used to be reliablly cold with enough snow for the local ski lift to open, sometimes from November to February. Now you’re lucky if there is some snow for a week or two. Even in the alps the skiing season is getting shorter. Last time we had -20C must have been in the 90s.

My heart goes out to all of you that are experiencing abnormal weather. I’m in the desert and this time of year, it’s wonderful. Mother Nature is doing fine by me (so far). Father Time on the other hand, is kicking my ass!

Rhode Island here, it was 70 here on Wednesday, and snow to rain / slushy mess today with temps dropping again. So all the slush is going to turn to CEMENT !
You know what they say in New England, If you don’t like the weather, wait a minute 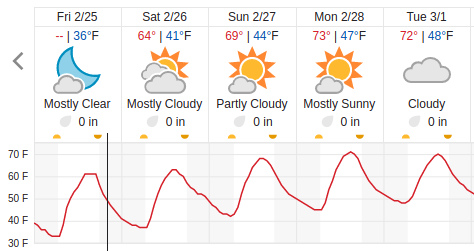 In Barcelona, Spain, we have a Mediterranean climate, mild winters, it is rare to be below O°C, snow every 10 or 20 years…

I complain about the few 6 inch snowfalls we’ve gotten in the last month or so.

Then I see this and don’t feel quite as bad.

I won’t be visiting until summer, when the only thing to bitch about will be the bugs. 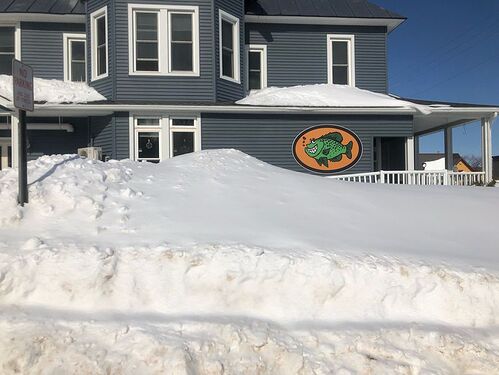 Over here in the UK we’re having generally clear skies after a week of wheelie bins flying through the air in an uprising akin to the first episode of the Doctor Who reboot.

Southern Michigan is bouncing between teens and forties. Occasional snows of one or two inches.

Phoenix Arizona here.
I had two days off this week and could barely bring myself to go outside because it was so cold, 40 degrees.
I’ve actually had to run the heater at the house.
June through October is when when we take it in the shorts, but in the form of HEAT.
300 dollar electric bills and the A/C running 55 minutes every hour, and so hot your shoes nearly melt.
I had to wear a jacket the other day just to go to the store!

could barely bring myself to go outside because it was so cold, 40 degrees.

Chicago here. I had to laugh when I read that. 40 degrees is shorts and T shirt weather here. Woke up this morning and it was 7 degree’s F. Yesterday morning woke up to 6" on the driveway.
Lived in Phoenix in the early 70’s and as bad as Chicago gets in the winter I wouldn’t trade it for August in Phoenix. Dry heat? Sure.

Where in Chicago?
I live off I-90/39 at the Illinois/Wisconsin state line.

Currently in NorCal, it’s cold and dry. We are really hurting for rain and there’s absolutely F–k all in the forecast the last I checked. We’ve got wispy clouds to taunt, but no precipitation. I’m a sad panda… Currently looking into some rain capture for when it does finally rain, but I’ve got to be sneaky about it since our town doesn’t currently allow for that. I’m thinking of a few large tanks buried on our top lot with a solar-powered pump…

Live near Elgin in the Fox Valley on 90 close to 47. Lived here 47 years in March. People who lived in Elgin though I moved to the end of the earth. Actually we’re not too far from each other.

My step-sister and her family used to live on the Fox River near Crystal Lake. Always had fun there.

Thinking it’s going to be another nail-biter of a fire season for you northerners. Stay safe brother.

Currently in NorCal, it’s cold and dry. We are really hurting for rain and there’s absolutely F–k all in the forecast the last I checked.

@paingawd I’m surely going to pray for rain for you guys.