I must have missed the initial email that Hurricane Vapor is going out of business. Just received an email letting everyone know they are selling their recipes - all 43 as a group - for $100. They had a couple flavors that I like but not $100 worth.

If someone likes more than 2 or 3 and is interested in buying all of their recipes, I would be willing to buy a recipe or 2 or 3 from you. 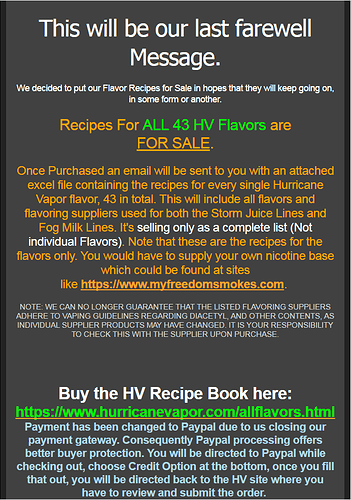 Anyone wanna go half’s with me?

I’d say get as many people on board as possible, buy all the recipes and make 'em public right here on ELR.

I was thinking about picking them up too just because I loved the Vanilla Sky Tobacco and the Banana Bread Pudding flavors. 100 bucks is a bit steep though… Hopefully we can get em up here regardless. Hurricane had some really good flavors!

I’d chip for a group buy.

I would chip in also. Since I started this topic, send me a private message if you are interested. We can give it a couple of days (or longer if so desired) and divvy it by the total # of replies. Paying via PayPal would be ideal.

Any further thoughts or ideas on a better way to do this are welcome.

I must say I have slight mixed feelings about posting them.

I don’t nessisairly see fault in 10 people chipping in amoung themselves.

But personally I feel slightly not super excited to see them posted. Maybe it’s my personal mood as I watch the company I am leaving next week crumble alittle in the last few days. Maybe because I see even more clearly my own failures and successes over the last few years. Maybe it was something said to me today and the choices others are making that are not the most positive.

So I would say a lean more towards not posting. Hopefully after the company has a chance to profit from their work they will choose to post after that. That’s what I would do. One last screw you to the FDA.

All in all kinda negative above. Don’t fret. I’m still very excite about the future. Just a food for thought. Not meant to point a finger…remember, 4 are always pointing back.

@Chrispdx Thanks for your input. I think that’s a good point. I do like the idea of saving money by a bunch of us pitching in but we should give HV a chance to make a profit since the FDA is preventing them from doing so.

ok for me 4 the group buy

@Chrispdx I agree. They were a great, proven vendor. I don’t agree that the recipe book should be posted on line. I know they’re out of business but they are offering many who liked their flavors to continue having them. $100 bucks may be steep if you only like 1 recipe, but even at that, after about 10 bottles it’ll more than pay for itself. A non-posted group buy for me is more ethical (I know I’m going to get a lot of flack about “ethical”). But to me, this is like buying a book. You pay for it, but you shouldn’t post it online for free. There is an author(s), after all. And copyright.

BTW, Chrispdx, what exactly killed them? The FDA? Regulations? You seemed to have a pretty good operation in place.

I’m a big fan of Hurricane Vapor and absolutely love Belgian Simmered Tobacco and Papaya Milkshake. But I do think they should be given the opportunity to sell their recipes until they shut down before they get posted on here. That being said I don’t have $100 so when they close would someone please share the recipes. I’ll miss them and I am saddened to see this happen to any company. I’ve been buying from them since they opened up.

I would imagine that this is not exclusive. So they could potentially sell their recipes off to 50 different people for $100 each.

Ok folks, I have bought the recipes.

No it’s not my own company. Zero affiliation.

Just wanted to post the perspective from the other side of the house…like what if I was in their shoes.

Hopefully after the company has a chance to profit from their work they will choose to post after that. That’s what I would do. One last screw you to the FDA.

Unfortunately that would also be a big screw you to the people who forked over $100.

Over on Reddit, Boomdog07 has paid for a copy of the recipe spreadsheet and is asking for $5 contributions to send on a copy when it arrives.

I wonder if they have a good chocolate recipe? Just curious as I would also like to chip in on these recipes, feels bad they are closing but it would be terrible for some of the recipes to just disappear.

A quick update from me, as I’m in NZ and it was after midnight here when I last posted, I have been sleeping.
So just checked my emails and have not yet received the anticipated excel spreadsheet of the recipes.

I’m quite happy to share the recipes with my fellow members if they would like, for a contribution of course.
What do you reckon is fair? as I am not wanting to make money out of this