I’m so busy 95% of the year, I don’t have hobbies anymore – so a week off is like 3 days of knocking out every household chore and work order that’s around at the time, and then 4 days of “I only get two of these a year and I feel so guilty wasting my time off, and yet there’s literally nothing I want to do.”

And yeah, I know life isn’t about work and making work your life defeats the purpose of living. Unfortunately, at what I make, you work to live, working less would really mean not working at all, first because they’d fire me, and then because I’d be homeless in short order, even if they didn’t fire me, and especially after they did XD.

I do have a job where I get to listen to audiobooks 12 hours a day, and that’s great, but not having something to do while I listen to one actually makes them kinda suck when I’m not at work and all the yard work is done and. . .dude, I found an old 2.1 pc speaker set, and paired it with my current set today to make a really shitty quadraphonic setup (including making little speaker shelves) because I’m just bored!

Is it upsetting or relieving to think that all this boredom is already halfway over or only halfway begun? 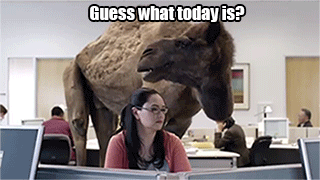 Now if you discover a project that will excite and keep you busy the rest of the way, you have to ponder if you want to attempt it with that much left time.

Think of it as my cure for boredom and thank you!

hello??? diablo 3!
can’t you multi-task while you listen to audiobooks?

Quadraphonic? I figured you were younger than that. You’re showing your age.

Let’s try tags since I realized 3 posts in a row was silly and you can only “reply” to one person at a time:

@warkwarth : I beat the first dungeon and boss and was like “I really don’t want to do that 5 or 6 more times.” The real appeal of Diablo III after the first couple hours is the lootfest, and loot fests just don’t tickle my brain the way they do for some people – maths in games like Disgaea games or any old MUD tickled my brain. Loot, not so much. I don’t like Rouge either.

@TorturedZen I’m 30, and I bet the MUD reference dates me more than quadraphonic sound. . . which sucks so bad, by the way, booted it up in GTA V and like, I mean it works? But seriously, setting the second set of 2.1 to front speakers as well and just having two sets of speakers to make the soundstage FEEL fuller (read: be louder) actually sounds better. . .and doesn’t have hilariously bad mixing for sound location.

I wish Windows Sonic or Atmos Surround worked for everything. We have had full (virtual)surround headphone mixing for like, years now, why don’t people use it? Okay, I get why small-time folks don’t use it, but with a hundred million + USD budget, you have no excuse. There’s the whole argument about “It’s not real surround”, which isn’t the point, and the more sensible one that’s basically “Well 5.1 and 7.2 surround are freaking awesome!” which is definitely true, but also not something you can do well for 100 USD and a footprint (space) budget about the size of a hardback novel. You can get some seriously cool results from Windows Sonic (free with, even an unauthenticated, copy of windows) or Dolby Atmos (like, 15 USD?) and Audio-Technica’s headphones are so damn sturdy, and reasonably good (especially for the price), you can pick pick up an old pair from Ebay and have a pretty solid time, I don’t see my ATH-M50S on ebay, but there’s some M40Xs up for around 100USD, and I’ve heard that the M40 models are better value for money than the M50s right now.

And, to the thread: I found a thing to do!

First, I organized the cables under my desk (it was. . .it was mess) 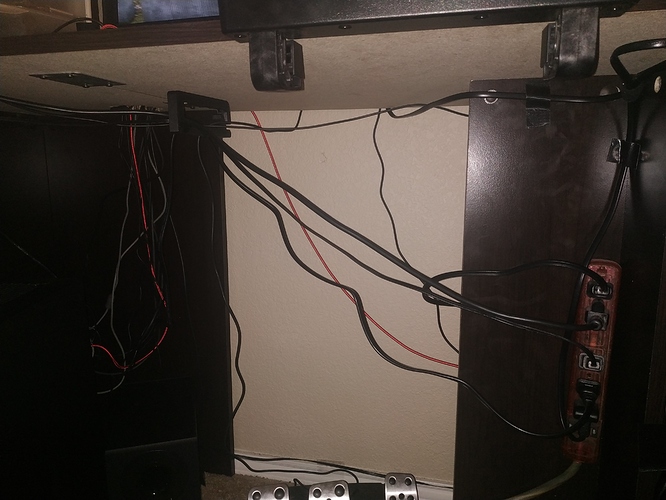 The wire hanging thing, kinda looks like a clamp or clip but big? That’s actually screwed in and, I didn’t have small enough screws for this desk, so I have the screw sticking out the top and just stabbed a box with some screws in it on top of that to hide it. . .and also keep the box where it goes. . .I guess. . .heh heh. 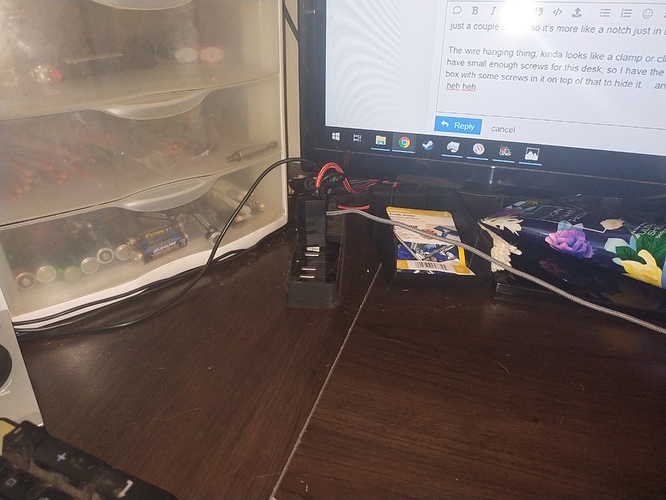 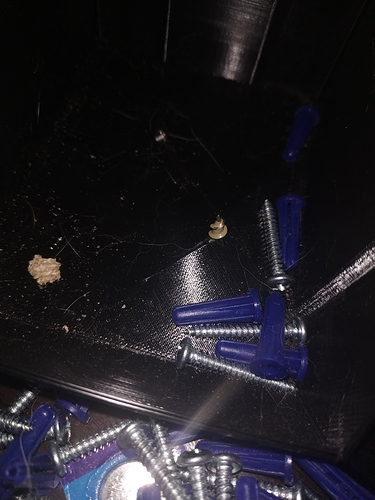 Right, I also velcro’d up two power bricks, one behind the panel I’ve got one power strip attached to . . . I have a second power strip on the outside of the desk, for a clock, lamp, fan, and I keep pluging an extension cord in it to use a drill . … and the second power brick I can show you more easily. 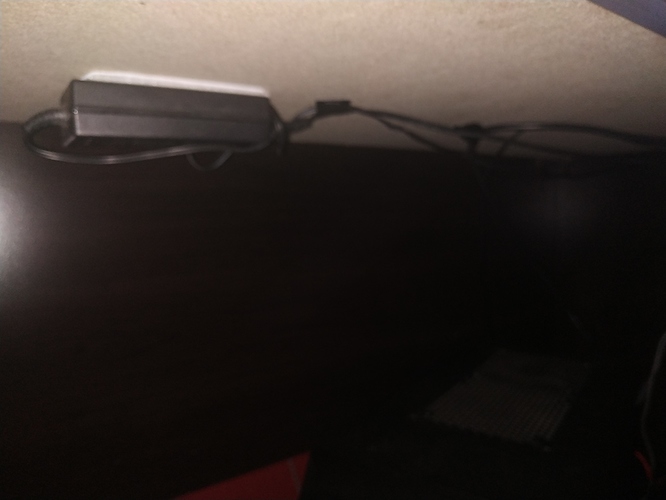 IMG_20190327_235349.jpg4000×3000 438 KB
Why yes, yes I did also just tape some wires up there. . .or several. That bracket took 4 hours to print and I don’t want anymore screws sticking out of my desk! I could have used mounting tape for more wire brackets, or, really, cut to the chase and tape the damn wire down (or, in this case, up). So, I taped the wire down, and stapled the tape near the wire for good measure. . .because gorilla tape kinda sucks. I need some gaff tape >.>

Oh, you can see more taping above the power strip in that first photo actually. When I still hoped to not actually have anything hanging at all. I gave up on that, almost immediately.

But wait. . .what are those pedals I see on my floor? 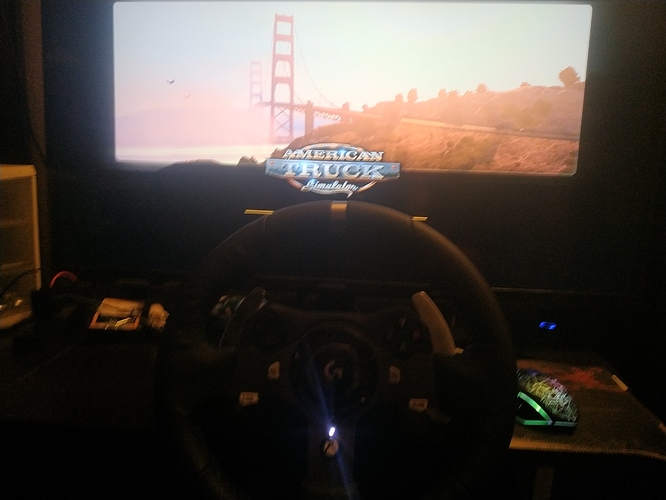 IMG_20190327_232626.jpg4000×3000 806 KB
Just finished my first delivery in Truck Simulator! Cause, I remembered I had this thing from Forza Horizon 4. . .which wasn’t much fun to race with it in (but loads of fun to just cruise with the wheel) because it’s really just tuned too well to controllers. … and I suck too bad with the wheel I got for the game :P. Driving a whopping 55MPH on the other hand? Totally doable. Very nice, very soothing. Listening to audiobooks with this and. . .except for parking the freaking trailer (which you can just skip if you want), this is rather like a nice little cruise, without all the stress of the real-life reality that driving is literally the most likely thing to kill me and that’s a big part of why I’m persistently terrified when I drive in real life. >.> Worse that happens in a game is you get docked points n.n.

Oh, and, in case anyone wants to see the craptastic setup:

(also not that little box between the speaker and keyboard, it’s a FiiO, because it was cheaper than a soundcard and my MOBO just won’t give the ATH-M50S’s enough oomph. … basically it let’s me turn them up louder, no, the volume dial the pc speaker sets have won’t let me do that) 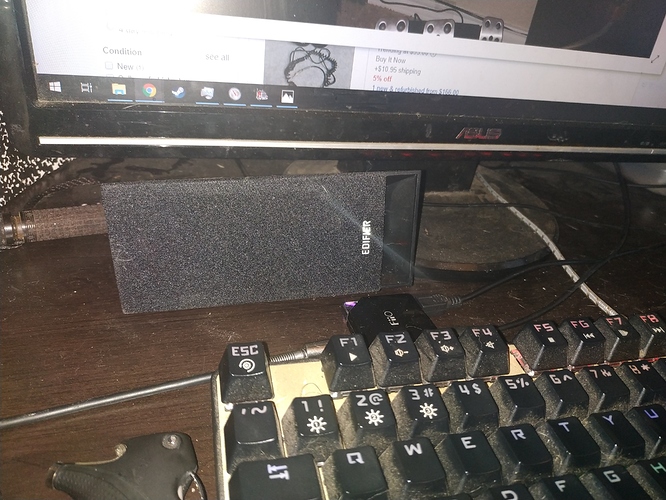 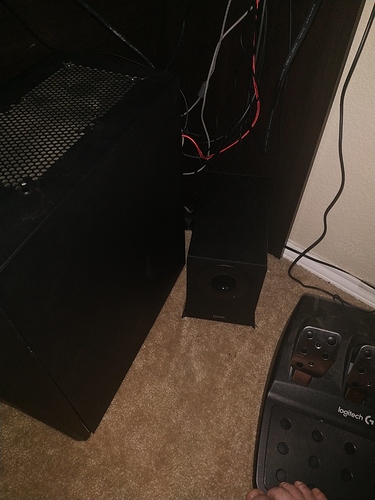 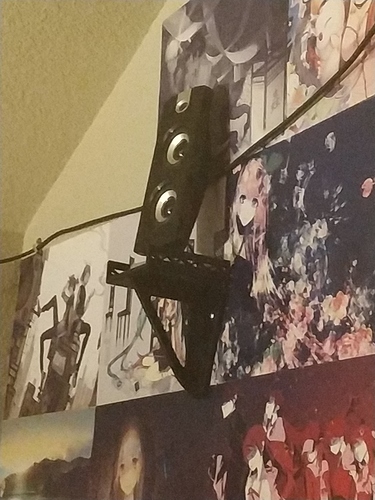 These in the obvious places on the opposite wall — well, frankly higher up than they should be, that’s the ceiling, that corner, but whatever, my bed’s on that wall dammit— Note the clever design of whoever did the original model for that shelf? The wire runs thru a channel in it and out the bottom! Note my genius here? I ran the wire under the posters! XD 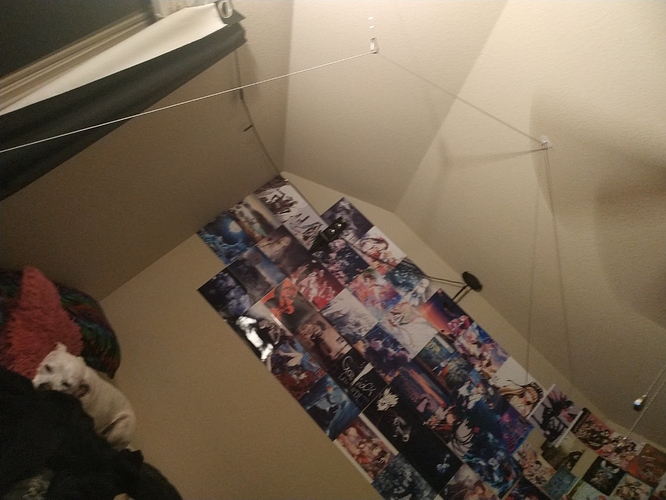 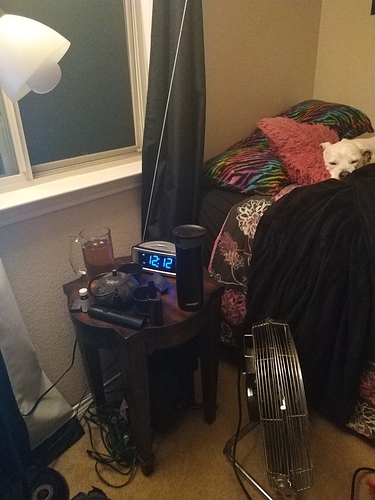 2.1 speaker setups are just so weird to me. Remember when people bough soundcards and reciever towers? This “PC Speaker” and those dang soundbars are just odd to me. I actually hate the soundbar thing; I’ve never encountered a remotely decent one, and the cheapest ones cost more than any basic two speakers and a subwoofer (that sounds a heck of a lot better) setup for the living room or PC. I’m sure good, even great, soundbars exist, especially with virtualization getting so good lately. . .but I bet they cost as much or more as a pretty solid 5.1 setup.

OH!, looking at that last foto, one more thing: 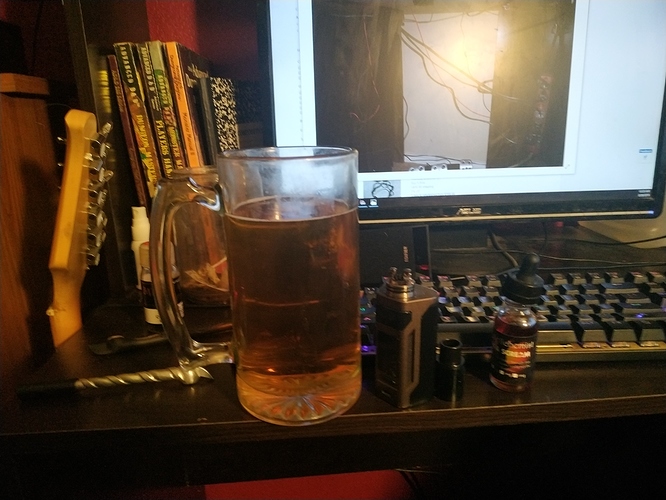 P.S. I see I accidentally did an Inception of the first foto with my monitor there . . . Ohhh, spooky! Yeah? No? All right.

I saw this thread last night and my sleepy eyes thought the title was “I Hate Vaccinations!” Thought this was about to get all crazy with debate. Carry on.

No just a crazy thread