I Live with a dependant Vaper! lol

So I was posting in another topic and found a kindred spirit @CosmicTruth. So I decided to start this topic. my Fiance and I are what I like to call a Vape love story lol I know that might sound corney but oh well. (who is this guy…) anyway we met a few years back at a Vape shop I used to work at. Long story short we both quit on cigalikes but I introduced her into the ego style and iv progressed quite a bit since then. I started building and mixing a little over a year ago. At first it was to save money since buying premade coils and Juice gets expensive and we have kids lol. I love doing them both but I have to build and mix for 2! She wont even attempt to wrap a coil or mix some juice. She just hands over her tank and says “fix it” lol. Cotton not wicking right? here you go fix it… “Oh baby I’m low on juice can you make me some more?” I just roll my eyes and pull out my kit… Anyone else out there feel my pain? lol

anyway we met a few years back at a Vape shop

and we have kids

…and Welcome to ELR

At first I thought you were having an affair with my wife, now I just think we have parallel existences.

She just hands over her tank and says “fix it” lol. Cotton not wicking right? here you go fix it… “Oh baby I’m low on juice can you make me some more?” I just roll my eyes and pull out my kit… Anyone else out there feel my pain

My wife has her own recipe book and wraps a better coil than i do, all them years of arts and crafts. Yet i still do the vast majority of the coil wrapping and mixing. What ever keeps her off the stinkies im good with it, hehe.

At least you can make her take that first step lol

Agreed! If I have to keep wrapping and mixing to not smell those things anymore I’m o.k. with that!

Damn this is a common thing I can see, my wife’s idea of mixing is when she runs out of a flavor she likes and has forgotten to have me mix more so she puts another flavor with it in the same tank. At least I finally got her filling her own tanks. We don’t do the coils, she wouldn’t want to learn and I can’t do them due to arthritis. So we use tanks but should she have a problem with her tank she hands it to me and says it’s not working right. I take a vape and more often than not my ears pop. I pull it apart and the cotton is blacker than coal the juice doesn’t have a pleasant smell to it. Clean it out replace coil fill and give it back. She takes a vape and say wow that’s so much better. I ask if she ever notices when it get hard to draw on there is so much gunk in it. He usual response is no not really. lmao

Same thing here, except I don’t have a wife.

I do all my husband’s mixing, but I like it that way. My mixing style is what you would call organized chaos and if he changed anything I’d go nuts, that’s if he could even navigate the supplies at all! He still uses pre made coils, but as soon as I get a little more comfortable building my own I’m sure I’ll start building them for him too. Like @Ken_O_Where said, whatever keeps them off cigs.

I’m minus a spouse (not met anybody daft enough to stick long term lol) but I do mix for my two best friends (who I also work with) and I’m forever getting “has my coil gone?” and “is this firing properly?” and “why is it gurgling?” thrown in my direction

feel your pain brother, and i can sum up our vaping relationship in 2 pictures…
her bedside table… 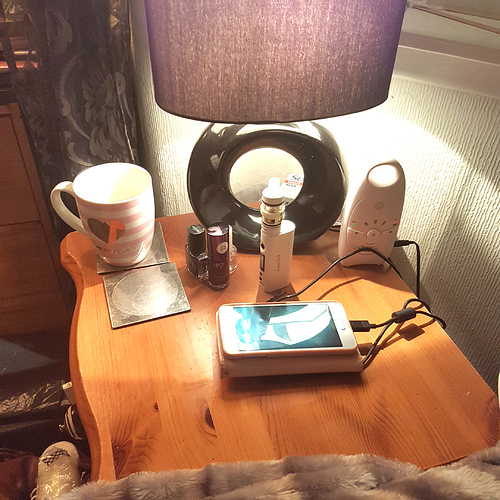 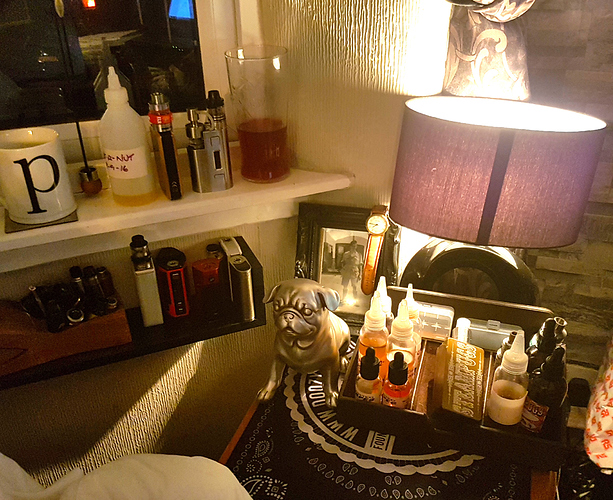 Yo gpc! Long time no taunting!

Who what huh me